It was a cold and blustery day in late December when we decided to visit the Dallas Arboretum. The clock was ticking down to the close of the Chilhuly glass exhibit. The show had been going on since May but yours truly was his usual slow-on-the-uptake self and didn't get the word until I heard the exhibit was being extended to the end of December.

Of course glass sculpture lends itself quite well to viewing at night with strategically placed lighting but....Oh, Nick didn't get the word until late in the game after all the nightime tickets had long been sold out. Well we got the daytime show and were not disappointed.

The exhibit is also part of the Dallas Arboretum and Botanical Society’s big revenue and membership drive. The Chihuly exhibit was expected to draw in about half a million visitors and $4.5 million bucks in ticket and gift sales.

During the Spring and Summer, the Arboretum puts on a pretty good spread of indigenous and exotic plants and flowers. During the winter, they pretty much blanket the place with Pansies and ornamental Kale which can survive quite well in the freezing temperatures we see in November through February. So after paying our way in, with exhibit map in hand, we made our way around the rambling grounds. The Dallas Arboretum is a 66 acre garden that is made up of both the former DeGolyer and the Alex Camp Estates. 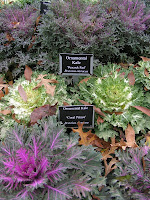 A real rags to riches story, Everette Lee DeGolyer was born in a sod house on October 9, 1886 in Greensburg, Kansas. DeGolyer attended the University of Oklahoma studying geology beginning in the fall of 1905. After doing some time as a field assistant with the US Geological Survey finding oil, he headed south in 1909 to Mexico where he was instrumental in developing the oil boom there. He then completed his studies at University of Oklahoma in 1911. Known in the oil industry as "the father of American geophysics," and was a legendary collector of rare books.


DeGolyer opened a petroleum geology consultancy in 1914 moving to New York City in 1916. There he helped negotiate some pretty lucrative oil company mergers with Royal Dutch Shell. He moved to Texas where, using the science of geophysics, completed surveys which helped in discovering oil at Spindletop.


In 1925 DeGolyer established the Geophysical Research Corporation which helped develop reflection seismology techniques. Reflection seismology is similar to sonar and echolocation. You make a big bang on the surface and the returning sound waves give you a map of what’s underneath. The discovery of oil really took off and made Mr. DeGolyer a bunch of money. For his work in Mexico, he was often paid in gold.  A spin-off subsidiary of GRC was a little known company called Texas Instruments. In 1932, he moved his family to Dallas where he built his dream home on 44 acres in a place called White Rock Lake. 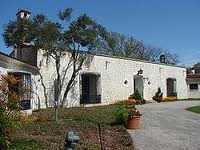 The home of Everett and Nell DeGolyer was designed to look one hundred years old when it was built in 1939. The home is a Latin Colonial Revival style rambling one-story 21,000 square-foot structure, evocative of a Mexican hacienda. It has thirteen rooms, seven baths, five fireplaces, seven chimneys. The library has seventeen hundred and fifty square feet. The home was called “Rancho Encinal” because of the many live oak trees on the property. The property had been a 44  acre dairy farm when purchased by the DeGolyers. The house had central air conditioning and heating when it was built. Quite unique at the time.


The architects were Denman Scott and Burton Schutt. The DeGolyer Home is on the National Register of Historic Places as well as the Texas Register of Historic Places. The house has recently been renovated to re-create the look of the 1940s when it was first built. When Mrs. DeGolyer (Nell) died at the age of 85 in 1972, the estate was given to Southern Methodist University (Laura Bush's Alma Mater). Mr. DeGolyers extensive library was split between SMU, University of Oklahoma and University of Texas at Austin. Later, SMU sold the house and grounds to the City of Dallas.


In the early 1930's, Everette DeGolyer chaired a committee to find a landsite for an arboretum for Dallas. Sixty years later, the concept for a botanical preserve became a reality on the very land he once owned. In 1977, the City of Dallas designated the DeGolyers property a park managed by the Dallas Arboretum and Botanical Society. 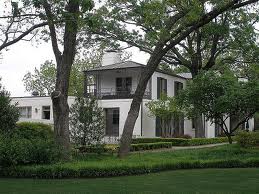 Next door, on another 22 acres, is the Alex Camp House a 8,500 square-foot home atop a gently sloping hill with a stunning view of White Rock Lake. It was designed and built by well known architect John Staub and completed in 1938. It is a fully furnished, white brick, two-story home with outdoor terraces facing the lake with an art deco décor.


Alex Camp and Roberta Coke Camp were from prominent Dallas families. Roberta Coke Camp (she must have been a hit at parties) was a generous philanthropist, who supported local civic and charitable organizations including the symphony, art museum, ballet, and her church. The house is a combination of Latin Colonial, English Regency, and Art Deco styles. It is one room deep throughout, with all living and bedrooms having three exposures. In 1980, the Camp and DeGolyer properties were combined increasing the Arboretum to 66 acres.

Dale Chihuly was born in Tacoma, Washington  University of Washington in Seattle, where in 1965 he received a bachelor of arts degree in interior design. In 1967, he received a Master of Science in sculpture from the University of Wisconsin–Madison. In 1968, he studied glass in Venice on a Fulbright Fellowship and received a Master of Fine Arts at the Rhode Island School of Design. In 1971, Chihuly founded the Pilchuck Glass School near Stanwood, Washington.

In 1976, while Chihuly was in England, he was involved in a head-on car accident during which he flew through the windshield. His face was severely cut by glass and he was blinded in his left eye, thus the eye patch.


After recovering, he continued to blow glass until he dislocated his right shoulder in a 1979 bodysurfing accident. No longer able to hold the glass blowing pipe, he hired others to do the work. Chihuly explained the change in a 2006 interview, saying "Once I stepped back, I liked the view". Chihuly describes his role as "more choreographer than dancer, more supervisor than participant, more director than actor." Oh, brother…..enjoy the show.

Chilhuly has samples of his work all over the world, some of you, who visit Las Vegas, might be familiar with his glass hanging from ceiling in the lobby of the Bellagio Hotel and Casino.
As many of you know, Texas weather can be very unpredictable. I wondered what the response would be to hail. Back in June, we had a rain and hail event which was somewhere between golf ball-sized and softball-sized hail fall at the Arboretum, but out of the two dozen sculptures in the outdoor exhibit, only a few pieces around the Persian Pond  were damaged. The pieces were replaced. No one’s talking about the cost, but the Arboretum did say the exhibit was insured for $22 million. Wow.
Posted by Nick Saraceni at 11:16 AM 1 comment: