Back to Tecumseh, Oklahoma

I know it's cumbersome to report about a place we've been to before but the trip really was more a mop-up of our previous sojourn to this product of the Oklahoma Land Run of 1891.

At the confluence of the US 177, US 270, and SH 9, Tecumseh, named for the great Shawnee Chief, was settled as part of the 1891 Land Run, one of only two rushes conducted to establish cities. Everyone's heard of the Land "Rushes" conducted in the late 1880s and was the US Government's answer to filling in the big gap created by acquiring the lands once held by the French and Spanish in the Louisiana Purchase and the seceding of land from Mexico in the Treaty of Guadalupe Hidalgo of 1848, the Oklahoma Land Run of 1889 was the most prominent of the land runs.

The Great Land Run of September 22, 1891 sought to settle Iowa, Sac and Fox, Potawatomi, and Shawnee lands. Ok...a little point of order. Hey....the land wasn't ours to hand out. It was, after all, land ceded to the Native American Tribes (by treaty) as re-numeration for having to give up (well...forced out of by the Great White Father) their native lands so America could satisfy it's Manifest Destiny and our greater desire to become the awesome bi-coastal society we've become.

What Congress had decided was "worthless" land became invaluable overnight with the discovery of precious metals, oil and the need to connect it all by a coast to coast railroad. So the decision was made to allow everyday folks into the once restricted lands in the hopes their sheer numbers would push out the Native Americans, for them to see the futility of it all and just let it happen. Well...except for a couple of hiccups, (The Great Sioux War 1876 ending Custer's career and the Crazy Snake Rebellion 1909 not to mention the Texas-Indian Wars of the 1870s) that's exactly what happened.

Well, I've been secretly cheering on the Native Americans as they expand their financial empires from Casinos, water rights battles and securing oil and gas holdings as they buy up surrounding lands with their glut of cash happily provided them by their former landlords who, in many ways, are becoming ever more dependent on their jobs and financial power which has translated into political power they could never have imagined or anticipated back in the bad old days. Two wrongs don't make a right but here we are. Ok....I'm off my soapbox.

Tecumseh, Oklahoma  was originally established to be the County Seat of Potawatomi County but in the shenanigans that usually occurred in these types of political sideshows, Tecumseh lost out in what most people today would agree was a rigged election and the City of Shawnee won out making Tecumseh's brand new Courthouse obsolete overnight. After years of non-use, it was torn down and was subsequently replaced by Tecumseh's City Hall. An early promise of big oil revenues evaporated in the Depression and never came about leaving Tecumseh a sleepy little town that never realized its potential. Although there are several Native American Nations in the area, the primary mover is the Potawatomi Nation, the 9th largest Native American Tribe in America which has the most significant footprint and Casino presence. 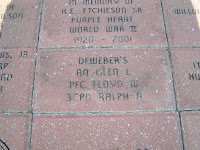 Our connection to Tecumseh is one Geraldine DeWeber Fortson. A Tecumseh area native, 84 year old Gerry (Tecumseh High school class of 1946 Go Savages) married Vaughn Fortson.  Both the Fortsons and DeWebers have deep roots in the area's history. They are both honored at the Tecumseh War Memorial at W. Washington and Broadway. 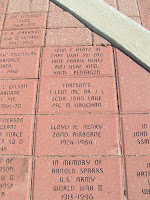 Gerry had been renting a home from Vaughn's mom and he was living in San Diego and working for Convair (later General Dynamics). When he came home for a visit, the two met and the rest is history. They moved back to San Diego to raise their family and became neighbors to Dianna's family in Linda Vista, a bedroom community of San Diego. The Fortsons had a daughter the same age as Dianna. They grew up together and attended the same high school (Stephen Watts Kearny Go Komets). I entered the picture as the new boyfriend and when we got married, had our reception at Gerry's house.

As the years passed, we lost contact when Gerry and Vaughn retired and moved back to Tecumseh as we raised our family in California. We rekindled the relationship only recently when, in 2009, we were invited to Gerry's 80th birthday . Turned out Tecumseh was only a three hour drive from our then new Frisco homestead across the Red River which borders our two states. We surprised her at the Tecumseh Housing Authority community room. We've been back a couple of times since.

Tecumseh has kept it's country charm and has become an up and coming bedroom community to it's "big sister" Shawnee. Gerry is a member of the oldest High School Alumni  in the state of Oklahoma. Classes began in 1895. Current and surviving members gather every Memorial Day to celebrate their connection to Tecumseh history.

Tecumseh took center stage when it was in the path of the 2010 Tornado which swept through that area and just dodged the bullet of Moore, Oklahoma's record breaking tornado as it passed from Moore to south of Oklahoma City and a second tornado the following day which swept the west side of Shawnee devastating those areas. Gerry has a storm cellar in the backyard but was precluded from doing so because all the neighbors she had offered shelter to filled it up before she could get in. Luckily it wasn't needed.

On the weekend we were there, Toby Keith was conducting his OK Twister Relief Concert at the University of Oklahoma in Norman.

Toby Keith Covel was born in Clinton, Oklahoma but grew up in Moore and brought a bunch of headliners to make money for the United Way of Central Oklahoma for victim relief.

Tecumseh just also happens to be the home of Oklahoma's Governor Mary Fallin. Fallin's dad and mom were both  Mayors of Tecumseh. Mary followed in their political careers as a State and Congressional representative and became Oklahoma's 27th and first female Governor in 2011. 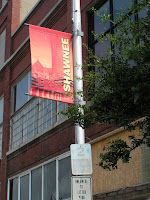 Little Tecumseh lies in the shadow of it's nemesis, Shawnee, Oklahoma to the northeast. As you recall, Shawnee beat out Tecumseh for the County Seat but more importantly, up to that point, it was being considered as a contender for state capitol for the young state cobbled from the old "Indian Territories".

Although Shawnee's founding fathers were riding a wave of success with the County Seat designation, it too landed on hard times during the Depression and an unrealized potential when the promises as a major railroad hub vanished with the prairie dust and exodus of residents during the Dust Bowl years. Old Shawnee is being replaced with the new developments springing up on it's periphery but downtown has been ignored or forgotten as the modern shopping malls, housing and eateries increase along the I-40 corridor on it's northern end. 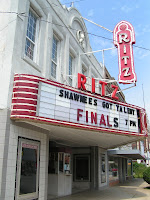 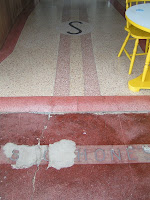 But there are still some gems to be found in the downtown area. There is the Ritz Theater, Oklahoma's oldest operating theater up to 1989 when it was donated to the City and is now used as a community theater. Along Main Street can be found several antique stores like Kathy's Past and Present.
Located in the former Shoshone's Jewelry Store, Kathy said the store has seen several iterations in its time on Main Street but it wasn't until she bought the building and discovered her mom had actually worked in Shoshone's back in the day. The original safe is still utilized and Kathy said they recently used it as a safe room when the Moore tornadoes came through. 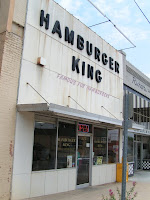 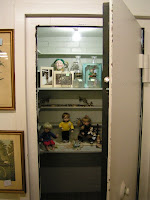 More importantly, Gerry had promised us to take us to one of the best hamburger joints in Oklahoma...maybe the world. Hamburger King  has been filling the tummies of Sooners since it opened in 1927. None of those prefab hamburger patties here. Each patty is hand formed and tossed onto the flattop to sizzle 'til done. People come from miles around just to have a slice of their pie and a cup of coffee. 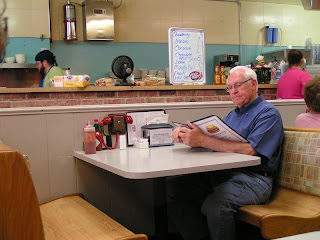 To order, you pick up your table phone and call your order in. How cool is that?

We rolled in and Gerry had the Hamburger Basket, Dianna ordered the Cheeseburger basket and I had the "Kicker" a bacon-cheeseburger with grilled jalapeno sliding around in pepper jack cheese. 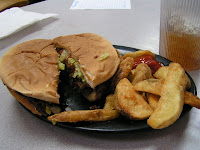 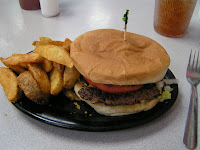 For dessert, Dianna pleaded for a slice of strawberry but had to settle for a slice of Key Lime. I had the "Monkeytail" chocolate swimming in a banana creme (sorry Tonia..it was delicious)and no pictures..we ate them too fast. All the while Gerry regaling us with tales of "dragging" Main Street with friends in their gas rationed cars and eating at Hamburger King after ball games in her high school years. 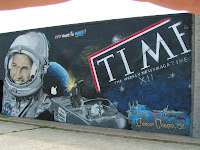 Shawnee has a couple of famous people connected to it as well. Gordon Cooper, one of the original seven Mercury Astronauts was born here. Some of you may recall the Thunderbirds puppet cartoon series . Little known factoid is that all the characters were named after the original seven astronauts. Gordon Cooper was depicted as Gordon Tracy the aquanaut call-sign Thunderbird 5.

A more contemporary celebrity is Brad Pitt who was born in Shawnee but grew up in Springfield, Missouri. He got his start as "Randy" a boyfriend of Charlie Wade (actress Shalane McCall) in the 1987-88 season. 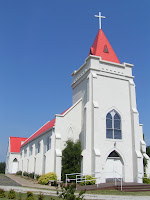 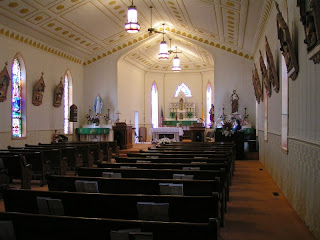 It began as a simple log cabin in 1877 when the Potawatomi offered a section of land to be used by French Benedictine priest, Father Dom Isidore Robot with the proviso the church would build a mission and a school. Nuns soon came along and a second school for native girls was begun in 1880 (probably brought those nasty rulers with them too). In 1901 fire destroyed the original mission and schools but were quickly rebuilt. The current church on Bald Hill was completed in 1915 and has a really beautiful interior. All the walls and ceilings are covered in period tin panels. 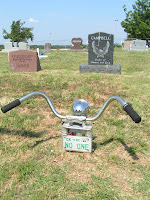 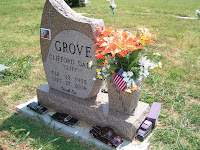 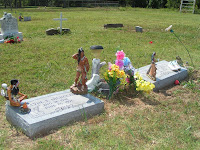 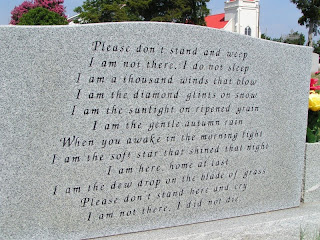 Dianna and I love old cemeteries (yeah...I know...kind of creepy) and this one is no exception. The 1909 Cemetery has burial stones of pioneers of the area some birth dates back to late 1800's. Some were particularly interesting and rather humorous. 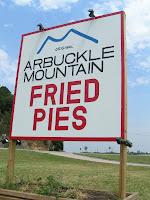 After a quick stop to pick up some fried pies at Arbuckle Mountain Pies we then made our way passed the "Welcome to Texas" visitor center at the Red River on I-35 our travels and trip down memory lane ended as we returned to Frisco.
Posted by Nick Saraceni at 8:52 PM 6 comments: