I love Mexican food. I was fortunate enough to come from the land of great Mexican food...San Diego, California. Ok....I have been challenged by my Texan brethren (or Sistren, feminine of Brethren....who knew?) for this restaurant or that (someone vehemently proclaimed "On the Border" as genuine Mexican fare...sheesh!). But to no avail. The wife and I would dutifully and anxiously made our way there to be satisfied but ultimately disappointed.

Luckily, I have a co-worker, Ed (who is a retired San Diego Police Sergeant), who is not only a Mexican food aficionado....but an excellent judge of the state of Texas Mexican. Yeah...neither of us like it. Ed has a proven track record in that he too models all Mexican food restaurants after the famous "Las Quatro Milpas" (known but to a few as the "Green Fly") in Barrio Logan.  With that in mind....he did turn me on to a new place in Sherman, Texas that he said was the best Mexican food he had had since leaving San Diego.

It is rare to find good Mexican food in this part of the world. Yes...there is Tex-Mex and a plethora of wanna-be restaurants that claim to have great Mexican food but none can compare, as it turns out, to this little restaurant, the Crazy Burrito at  1834 Texoma Parkway at the corner of East Taylor and Texoma Parkway.

Ok...its really not a restaurant in that it only has a small outside eating area, no inside tables and chairs to lounge in sipping Horchata or soft drinks. And during a North Texas Summer....well you got to get there early before the sun gets too high. But what a menu. It's as though we were transported back to Old Town, Chula Vista or National City (all vestiges of staid Mom and Pop Mexican food walk-ups. 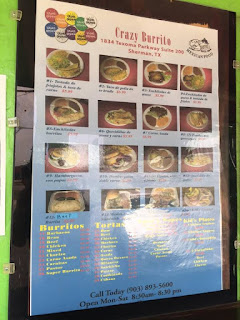 I met with Jesus, the store owner and once we identified ourselves as former residents of San Diego (yes...there was a secret handshake), his originally quiet demeanor instantly changed, his eyes brightened and he became louder and more animated as we spoke about his restaurant. Jesus had brought his family to Sherman in the hopes of operating a start-up restaurant and ultimately building a sit-down place where he could entertain his friends and patrons. His shop right now is small, nuzzled between an ice making machine (that turns out to be bi-lingual, dispensing ice in both Spanish and English) and a large Goodwill store.

We went with typical fare that would test the mightiest chain restaurant...I had the Carne Asada burrito and Dianna had the three rolled tacos (#23 and #8 if you need to know). Jesus said they had just whipped up some pineapple juice and we had two cold and refreshing cups to go with them. We were not disappointed...

The Burrito was quite large and was straining against a large quesadilla which was thick enough to have been handmade. It had thick and rich guacamole and plenty of fresh tomato and onions. Dianna's rolled tacos were crisply fried but not so they would shatter (major faux pas among rolled taco purists) and stuffed with lots of shredded beef and lodged in a snowbank of the Guac. 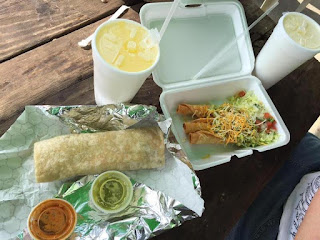 When given the option, I always lean toward hot sauce over the more mundane mild sauce one comes across. When he heard this, Jesus insisted I try his homemade hot sauce (the toxic looking orange sauce in the picture). I pinky tested the sauce (an industry standard) and was delighted by the taste (and the slowly expanding warmth in my tummy) so I applied a liberal splash onto the contents of the burrito and dutifully re-wrapped it. I bit into sheer heaven and could taste all the different elements, nothing was overwhelmed by the sauce. 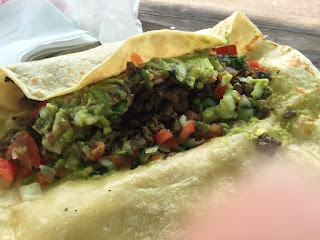 An added bonus...and we've all had this experience...a bite into the burrito end did not result in Newton's 3rd law of motion (for every action, there is an equal but opposite reaction). There was no extraneous beef juice spilling out onto the plate. A perfectly grilled Carne Asada if there ever was. Dianna reported an equally rewarding experience with her rolled tacos. The brisket was well done but held its juices well and not deluding the crispness of the taco shell.

Sadly...there was this second while we ate, that we stopped, mid-chew, to hold onto that moment in time. Realizing we had found Mexican Nirvana but knowing we would have to rise, roll up our now empty wrappings and depart. We looked at each other at that instant and thought-wished we were back home again, enjoying this in the candle-lit flickering lights of Casa Guadalajara in Old Town State Park waiting for a second round of Margaritas. Two thumbs up Jesus! Thanks.
Posted by Nick Saraceni at 4:22 PM 1 comment: