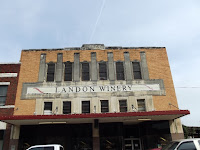 In our efforts to expand our horizons, Dianna has been keeping an eye on new and different ways to become one with wine drinking. To do so, apparently, requires us to delve into the inner workings of wine making. Coincidentally, she received an email invite to a grape vine pruning class at one of our local wine producers, Landon Winery

Landon has a couple of locations which double as winery and restaurant. The invite was to their  Greenville, Texas location northwest of Frisco heading toward the Red River line. The Greenville location is their "Bistro" location, more wine drinking than eating. But a decent menu of items none the less. Fun fact was that the Landon Bistro was originally an S.H. Kress Department five and dime store  as evidenced by the "Kress" name on the door pull. 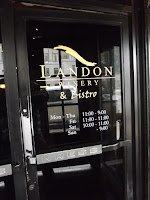 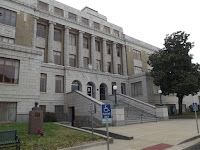 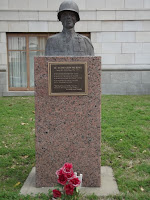 Greenville, you might remember, is the County Seat of Hunt County. Hunt County is named for Memucan Hunt, Jr., the first Republic of Texas Minister to the United States from 1837 to 1838 and the third Texas Secretary of the Navy from 1838 to 1839. But you probably knew that.

The Courthouse resides just across the street from Landons and, built in 1929, is the seventh Courthouse to reside there. The first Courthouse was a log cabin. The fifth iteration was a fine brick facade building which burned in 1883 leading to the construction of number six in 1885 but condemned leading to this beautiful example of transition Classical Revival to Art Deco becoming the rage during the late twenty's. Very cool Audie Murphy memorial out front. Greenville is one of three towns in North Texas which hosted the Murphy family in his youth. 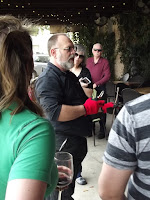 We were met by fourteen other brave souls and our host, Winemaker Glenn. About six years ago, Glenn was a former I.T. guy who hated his work and wanted to try something new. He knew he liked wine and decided to take the Viticulture Program at our own Grayson County College. The program is based on work conducted by Thomas Volney Munson back in the late 1890's which basically saved the French Wine industry from collapse due to a nasty little bacteria, "Xylella Fastidiosa" or Pierce's Disease. American grape vines had a natural resistance to it and Munson ended up taking several tons of our different varietals back to France to revive the grape stocks there and brought them back to life and production. Of course many of those at our class were convinced this was another example of how we "saved" the French but Glenn suggested that Munson basically grafted the American vine stock to the existing French stock and the "clone" became resistant to disease, not replacing the actual vines. 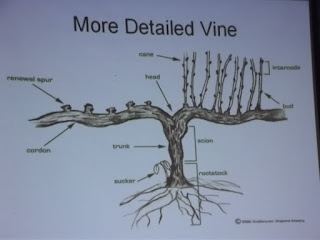 Glenn stressed that the problem has not gone away. Glenn said, although Texas and most Southern states' vines have some resistance, over time the resistance is fading and is non-existent in California where the bacteria has not penetrated yet. The bacteria is speading west and only the Sierra Mountains are holding back the scourge. Thus, many in the wine industry are working feverishly on hybrid plants to demonstrate resistance and overcome a potential disaster lurking for California producers. 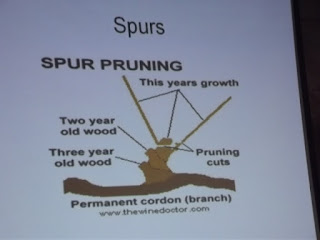 With that sullen backdrop, we began our Power Point presentation. Glenn showed us the structure of the vines and how to care for a vine. The vines grow pretty wild once they begin their Spring return so the vineyard workers must constantly be pruning errant vine canes to keep the vines producing.

Like roses, too many shoots will jeopardize the health of the plant. The idea is to increase the vines production in the lower canes to concentrate the sugar and starches to feed the vines growth. This, of course, has a marked effect on the quality of the grapes size and richness which is needed to foster fermentation.

Our job was attack the small vineyard in the Winery's yard and prune those puppies back to jump start the seasons grape growing. We do this by cutting back all last seasons growth but only back to the spurs on the cordons which run horizontally. The spurs need only be pruned back to the first two new growth buds just north of the Cordons. This gets the vine to start producing leaves which it needs to get sunlight involved in that photosynthesis thing we all learned in school. 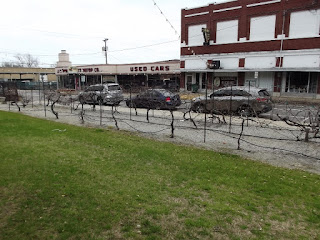 All of us took this very seriously when confronted by the gigantic mess o' canes we were confronted with in the yard. After a safety brief, which mostly consisted of, "Hey, do NOT cut your fingers off...it can happen", we dug in. 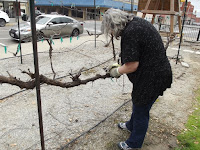 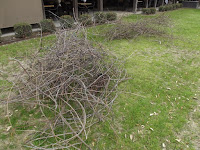 Dianna went at it like a true trabajadore (field worker). With pruners in hand, we cut a swath over two different vines. Our co-horts did the same as we cut back the morass of cane and suckers invading the rootstock. By the time we were done, there was a serious pile of sticks filling the yard. 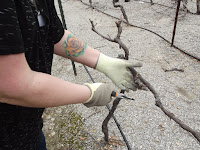 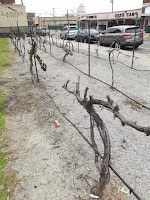 Glenn was very impressed by our work and offered some tips to those who wished to replant some of the cane. Many of them were green and budding so they could be planted using some starter fertilizer and a black trash bag. The idea is to trick the plant into believing it is in the ground (thus the black bag simulating darkness underground) but yet controlling the watering and feeding to make it strong enough to grow on it's own. Then at the right time, move it to a planter and then into the ground. Vines like water and their roots will grow very deep and far afield to get it. So planting has to be done carefully so it thrives.

Our reward was to have a great lunch provided by the restaurant. We had some steak shish kabobs, salad and a steamed veggie mix and, of course, one of their Grande Russo reds and Dianna had their sweet Yellow Rose white. Dessert was their Chocolate Mousse cake. Both went very well with both wines. While we spun tails of our battle against the unruly vines we conquered together. Now we must plan for the Harvest Festival on August 4th, mark your calendars and join us.
Posted by Nick Saraceni at 9:41 PM 1 comment: