The Last of the Bahamas

On arrival on our last stop, we hopped on a driving historical tour of Nassau. Now many of you (especially you Millionaire lifelines) might want to jot down that Nassau is not the capitol of the Bahamas. Of course, Columbus is credited with “finding” the Bahamas in 1492 (Chris...I think they were already there) but the Bahamians (mandatory education from 5 to 16) know that the Bahamas (really the Commonwealth of the Bahamas) are made up of a series of 700 islands or “Keys” (and 200 other cays and rocks) but only 20 are inhabited and referred to by their District name like Freeport with Port Lucaya as it's capitol or “County Seat” if you will. Therefore the Capitol of the Bahamas is actually the District of New Providence and Nassau happens to be it's County Seat. It just so happens that most of the main Government buildings like Parliament (Robert, in his really cool accent said,”Yes ladies  and gentlemen, this is where they make the laws and then break 'em), House of Commons, etc. are located within the City Limits.

Established in 1647, the Bahamas declared independence in 1973 but is still a British Protectorate kind of like Puerto Rico is a territory of the United States. The entire population of the Bahamas is about 400,000, 60% of whom live in or around Nassau. The Nassau we often see more of is The Atlantis Resort on Paradise Island which is just across the Bay from the Port of Nassau where we docked.

The Bahamas and Nassau, in particular, is still a major center of off-shore banking but, according to our guide Robert, the electronic age has brought about more regulation and influence from countries like the United States (and their evil sibling the IRS) have brought about more transparency and less (but not all) anonymity to account holders and making catching tax dodgers, drug money and funds tied to terrorists and organized crime more visible. 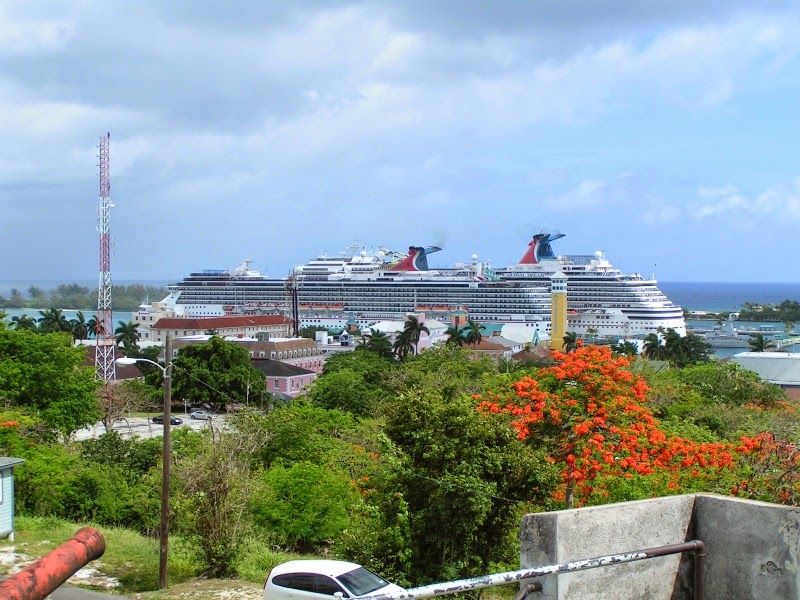 We drove up to tiny Fort Fincastle and the adjoining Water Tower. The water to tower stands 126 ft above the the hilltop and was constructed in 1928 to maintain water pressure in the city below (yeah..you guessed it, we paid for it to reward the Bahamas for cooperating with us during prohibition and keeping their demon rum out of our reach). It has a 216 step stairway with an observation deck (only 154 steps on the Statue of Liberty) but we didn't go (really....216 steps, Hell
no!). But luckily, Fincastle has a neat platform for a panoramic view of Nassau and the bay.

The city, as you can imagine, is pretty old and the central downtown is only a few blocks. Driving is a nightmare with tiny streets clogged with vehicles of all sorts clearly not anticipated by the founders which makes the downtown a cacophony of honking horns and heaving trucks and cars all vying for precious little asphalt. Robert pointed out the proliferation of the color pink throughout the country. Turns out pink is a national color of sorts due to the presence of Flamingos which are the National Bird of the country. 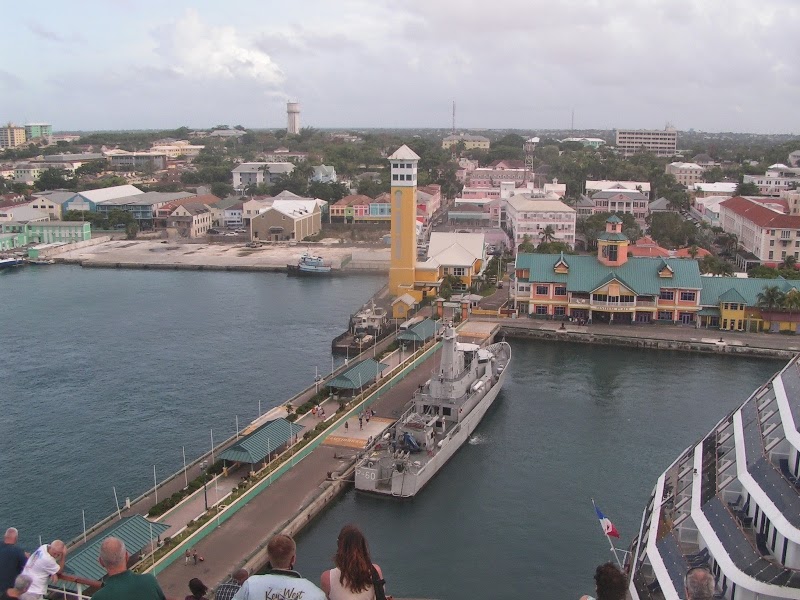 Actually the best part of the ride was the drive to the Queens Stairs and a long winding tour of several surrounding neighborhoods where the common and uncommon folks live. I love these kinds of tours the Tourist Commission doesn't want you to see because the areas don't put the country's best foot forward. I can only describe it as a mixed development community. You can have your million dollar home and right next door could literally be a very modest home some might classify as slapped together shanties. And lots of half-completed structures that we commonly see in many poorer countries we visit.

Of course, most of the really expensive homes belong to the aforementioned foreign wealthy and government elite but some residents have taken advantage of Nassau's unique real estate tax system. When you buy the land and/or home you pay the current estimated tax for that property. Then the tax board forgets about you until you improve your home to around $250,000 dollars (Bahamian dollar trades dollar for dollar with US currency) then they come back out, reassess and you start paying taxes again. Up to that point you're tax free until you sell your home. Then the new owner gets appraised at the higher rate and that new owner pays the new taxes from then on. Cool. 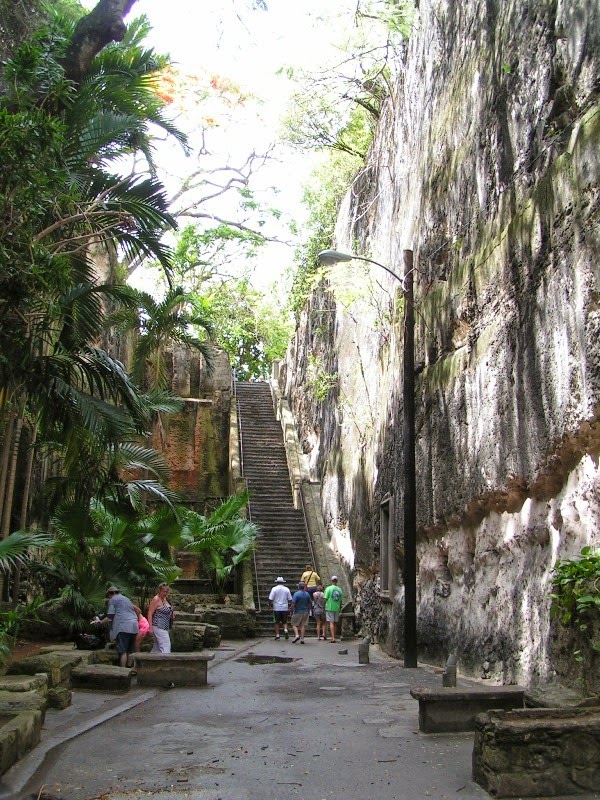 That similarly translates to paying for water. The Government won't make you pay for water until the value of your home exceeds that magic $250,000 dollar appraisal. Then you must dig a well and get your own water or pay for the service. Robert encouraged us to come to the Bahamas to live. He said a modest two bedroom can be had for between $16,000 and $40,000. Robert confessed that there is a high unemployment rate among their young men and is a sore point for the rest of the natives. They refer to them “as those who can but won't” and are the source of a lot of the crime. Alcoholism and illegal drugs (kind of an oxymoron for the Caribbean) are their biggest problems along with theft. 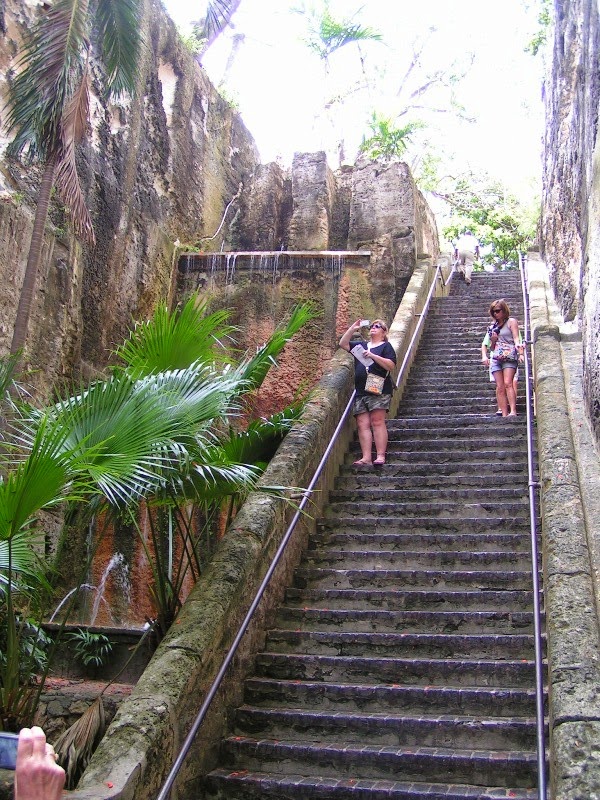 But I digress (yes Tonia....as I all too often do). The Queens Stairs is a really amazing bit of construction in honor of Queen Victoria on her signing legislation freeing the slaves in the British Empire in 1837. Over 600 “workers” (yeah...you get my drift) chiseled their way over some 102 ft down into the man made ravine created from the quarrying of stone for various fortifications and government buildings sometime between 1793 and 1794; a century later (Oh, how ironic) the 65 step staircase was renamed to honor the 65 year reign (actually 64 years 1837-1901...oops) of Queen Victoria as well as her role in helping bring about the enforcement of the abolition of slavery in the Bahamas. Quite an accomplishment for 19th century stonemasons with only hand tools to hew it out of solid rock in what one observer (me) would refer to as oppressive heat (recall this was May). Kind of on the same level as bringing all those stones together to make the pyramids.

Our final site was Fort Charlotte overlooking Nassau Bay. Built in 1789 by Lord Dunmore, the British Governor (ex-Governor of our own state of Virginia until the British lost), this fort took two years and 106 “workers” to cold chisel out the interior of this fort to house soldiers, their powder and shot to hold off an anticipated horde of Frenchmen who...never showed up. Must have been some kind of an intelligence failure. I'll bet some heads rolled (well...unless they were with the CIA). 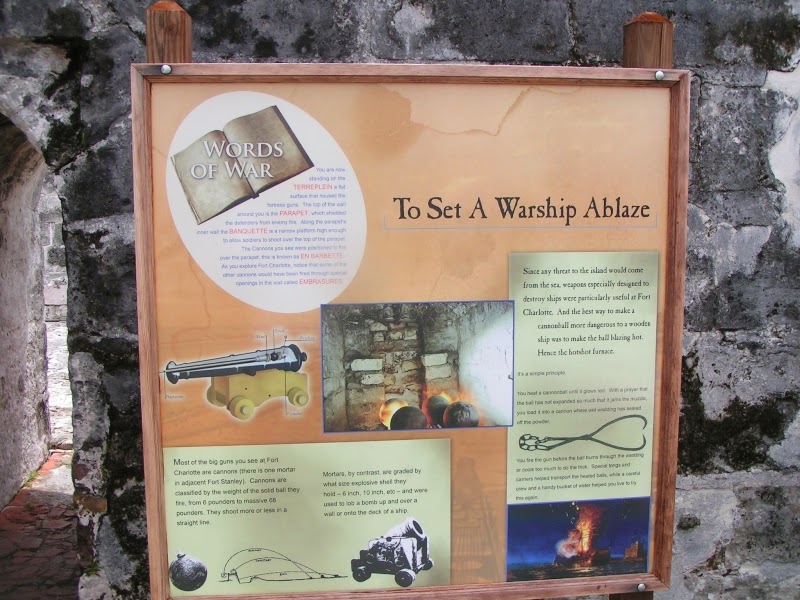 There was a display of the use of “Hot Shot” munitions used against the old wooden ships. The grenadiers would have large fire pits where they would heat up the cannonballs  to cherry red, load them in their cannons and fire them up to a mile at the offending ships. These “Hot Shots” were also referred to as “Great Balls of Fire”...now you know where Jerry Lee may have gotten his song. Kind of cool design feature includes a “dry moat.” It would have been difficult to maintain a water source to fill it up so the designer planted prickly pears to act as a deterrent against breaching Anglo-Saxons. It did guard the port for some 200 years and still provides a commanding view of the city and the harbor. Back to the ship and heading home. 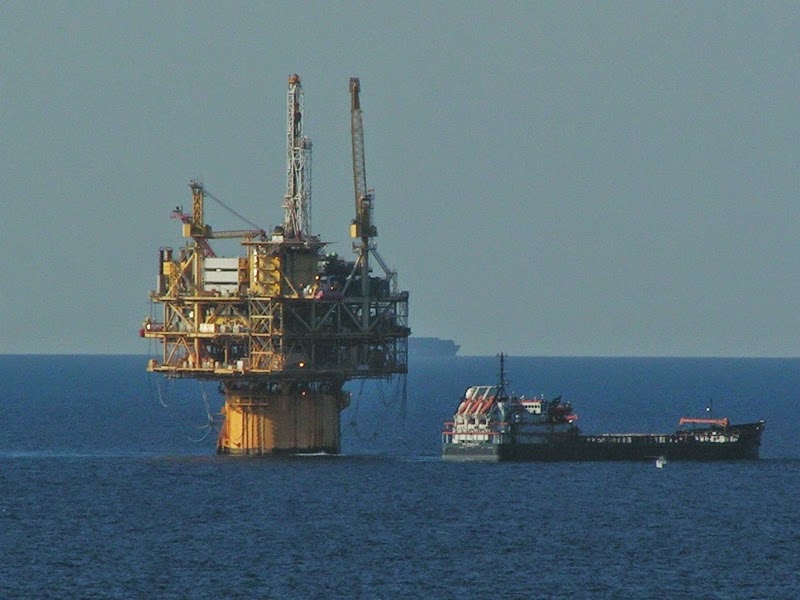 We have come full circle and as we approach the entrance to the Mississippi  Delta we pass by in review the many oil derricks dotting the Gulf of Mexico, standing tall over the water like Man 'O Wars of a bygone era lining up for battle but silently absorbing what's left of the oil and gas bubbling under the depths (hopefully not leaking) feeding our insatiable needs above the water. Someday they'll have sucked the world dry and hopefully we'll have found something cleaner and more sustainable for our children's future. 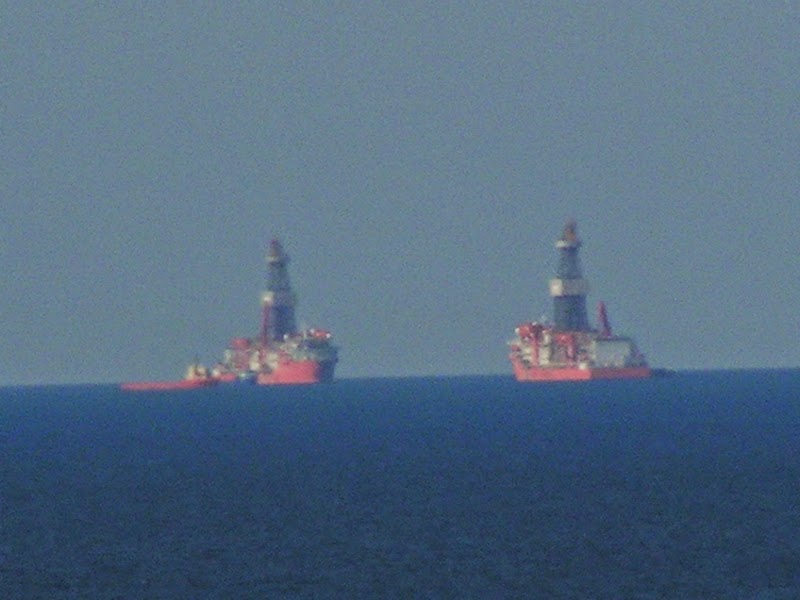 The weather has finally come around and we will be restarting our weekend travels soon. More to come!
Posted by Nick Saraceni at 8:26 PM No comments: