At the cross roads of State Highways 281, 220 and Highway 6, Hico, Texas (pronounced "high-co") is a small city located in Hamilton County in Central Texas. The town motto is "Where Everybody Is Somebody!" (Really, I’m not kidding). 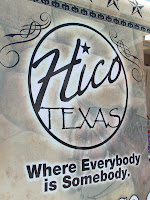 ﻿﻿
Hico was named by its founder, Dr. John R. Alford, for his hometown in Kentucky. The original site in the mid-1850s was on Honey Creek. As we’ve seen in many other towns we’ve visited, when the Texas Central Railroad came through the area in 1880 the citizens decided to move 2½ miles to where the line ran through where Hico resides today. Hico was incorporated in 1883 and became the county's shipping center. In time, it developed a major shipping market for cotton, eggs, chickens, and turkeys.
The residents have always had strong ties to their past. In 1882, an Old Settlers' Reunion was established in the community and has occurred every year except for the World War II years (1941-1945 for the historically challenged). In 1890, a fire destroyed downtown businesses on the east side of Pecan Street. As luck would have it, a few weeks later another fire ravaged the west side. The town’s people decided to rebuild the downtown in stone, which ended the fire threat and provides its rustic charm today. Many of the former storefronts like the 1895 Opera House and Ice House now contain many antique and gift shops, which have kept Hico’s town, center a vibrant place. 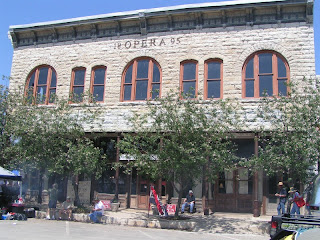 Not much puts Hico on the map but the town has promulgated the story of one of its former residents, Ollie P. Roberts, usually known as "Brushy Bill" Roberts, a resident of Hico during the late 1940s, claiming to have been the outlaw Billy the Kid. Although this assertion has been pooh-poohed by historians, the Hico Chamber of Commerce has capitalized on the folklore by opening a small  Billy the Kid Museum, where visitors can decide whether Brushy Bill was indeed William H. Bonney. I suppose anything is possible. 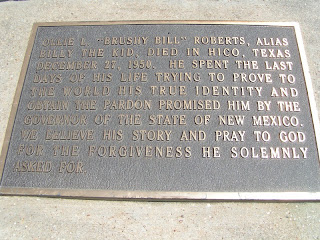 There’s a marker devoted to Brushy Bill in the historic downtown titled: "Ollie L. 'Brushy Bill' Roberts, alias Billy the Kid”. He spent the last days of his life trying to prove to the world his true identity and obtain the pardon promised him by the governor of the state of New Mexico. He was interviewed by the likes of fellow Texas Sam Donaldson and was the subject of a Robert Stack “Unsolved Mysteries” episode. There are several relatives and members of Sheriff Pat Garrett’s family that contend that Garrett and the Kid may have even plotted the fake death to collect the $500 reward offered for The Kid. Bill died in Hico, December 27, 1950. 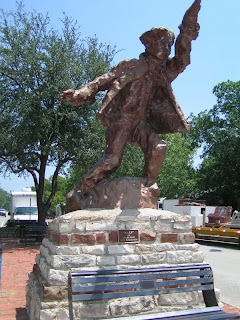 Hico establishments also sell  Dublin Dr Pepper, made from Imperial Sugar like the original recipe, rather than the cheaper (and evil) high fructose corn syrup we all swallow now. Dublin Dr. Pepper costs about twice as much for a drink as regular Dr Pepper. The "Dublin" refers to one of the original bottling companies in  Dublin, Texas that still produce the soda. As some of you may recall, Dr Pepper was first developed east of Hico in Waco, Texas. 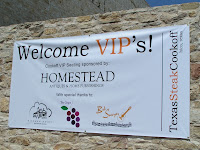 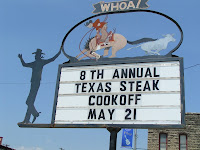 But, the real reason we were there was the Hico Texas Rib eye Steak Competition. Yes, Nick and Dianna will always make themselves available to be a part of anything that will involve free food. For the last eight years, Hico has sponsored the only Steak competition in Texas. Yes, you have your brisket, ribs, chicken and pork, but Steak, the only red meat, is a family favorite. The event has been featured on the Food Network, Rachel Ray and our beloved Texas Monthly Magazine. 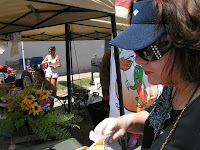 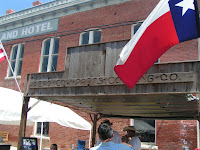 The competition started at 10 when the contestants heated their grills, massaged and cooked their steak creations, which had to be done by noon. Then the samples were sent to the Judges for grading. Winners were announced at 5 p.m. But after sending off their works of art, to while away the time, the contestants opened their BBQ stands to the public each making some examples of their beef, pork or other creations. Many we found just took an already incredibly tasty piece of beef and wrapped it in bacon or in the form of  “popper” which consists of a Jalapeno pepper stuffed with all kinds of concoctions and wrapped with bacon. Some made Jalapeno hor d'ovres on crackers or slices of cheese. There was one vendor that was handing out huge grilled corn-on-the-cobs for free.


We stopped in to meet team Steak, Stogies and Beer. I have always been grill-challenged and took the opportunity to get some tips from the experts. These guys had designed and built a huge round BBQ grill made from a water tank top and a removable round horse trough about four feet in circumference on a trailer. At the rear of the trailer/grill, were two large smoker boxes that could handle up to 20 briskets as well. I’m sure these guys were very popular back in their neighborhood. 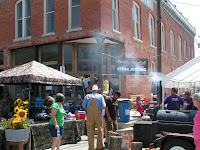 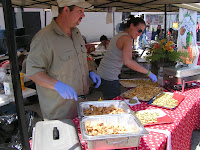 I asked what the deal was about the cut of steak. They both said that rib eye has the best marbling of fat and provided the grill master with the tenderest meat. Although the rib eye was the preferred meat, you can still whip up a decent steak no matter what the cut. Well, these guys never saw me in action.

When they asked about my problem, I told them I was grilling on a gas BBQ and always seemed to overcook and dry out my slabs of beef. When I said “GAS” both men started laughing. As anyone knows, grilling with real wood or charcoal is the ONLY acceptable method of BBQ by true aficionados on the planet. They didn’t make me feel inferior (too much) but had some excellent advice. Always let the meat comes up to room temperature before tossing on the fire. Prepare the meat with a rub or marinade and NO SALT. The grill should be hot….around 500 degrees. Then turn down the burners to low before throwing the steaks on.

Prepare a spray bottle with water and salt mixture. This saline solution is for flare-up control and to initially coat the rare side of the steak prior to flipping to sear the rare side. The spray will provide all the salt you’ll need. After the initial sear (less than 90 seconds to lock in the juices), push it a few inches with a spatula (yes, there is the Tongs method, but not according to these guys) so that side doesn’t stick. Another suggestion was to take half an onion in a mitt and rub it over the hot grill to clean it and reduce sticking. 3-5 minutes a side and take it off. You should only flip it once. Then take it off. NEVER cut open a steak to check it. “With practice, yer just gonna know when it’s done” was the sage advice. You can always throw an undercooked steak back on a grill. If it’s overcooked, you’re done and it’s ruined. I, for one, am well aware of this universal tenant.

We thanked our hosts and wandered up and down the rest of the downtown streets to consume more beef, sausage (regular and hot link) and poppers. It was hot and humid from the passing front and rain that had hit most of Central Texas the day before. The many sizes and variety of grills strewn on both sides of the streets pushed the temperature up into the 90’s. The heat waves and smoke swirling from hot coals or mesquite wood gave the whole town a blueish-grey hue, like the scene after a Civil War battle. 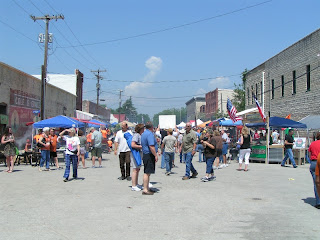 Then a strange and yet heartwarming event took place in the town center. Around 12:15, during the initial welcome address from the event sponsors, the announcer asked us to pause for the Star Spangled Banner. In one motion, as if on cue, everyone I could see turned in unison toward the small American flag which was waving (more from heat waves than wind) at the information booth. Mind you, there had to be several hundred people just within the two blocks I could see from my vantage point.

As if part of the choreography, every cowboy hat and baseball cap were reverently drawn off heads and mounted to their owner’s chest. A young lady took the microphone and sang “a capella” (sans music) to the assembled crowd, some joining her in song. Not another sound could be heard anywhere. I am not one to make light of such a moment except to say it was “magical”. You really had to be there to get the sense of it. Rural Texans are renowned for their patriotic spirit at moments and events like these. Here was a fine example just past noon in Hico, Texas. 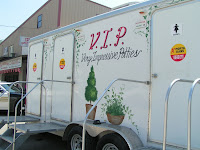 Although food was the central theme, there were several other vendor stalls with art, jewelry and clothing (I forgot to get my T-shirt). They even had airconditioned Porta-Potties. We made our way throughout the six square blocks of the event. There wasn’t a lack of “stuff” to spend your money on. Our hair and clothes smelled like we had walked through a forest fire. 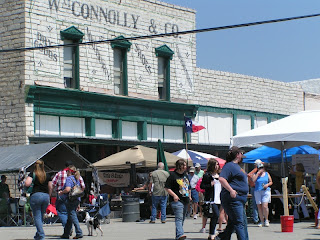 If you wanted to wait around, you could buy a ticket for $25 bucks and select any of the participants to make a steak to your specifications and have dinner in the town square. If you paid $100 bucks, you could have a celebrity Chef make your meat and dine “al fresco” under the stars in a courtyard behind the Opera House.

Around 2 p.m., we decided to forgo the announcement of the winners and cranked up the Rogue, the air conditioner and Patty for the trip home. But the free handout fans we were given were now tattered and my deodorant had quit working long ago so we had to go. We were so full it was hard to get back to the car for the drive home. But we will definitely make Hico a future stop for fun, food and adventure.
Posted by Nick Saraceni at 7:23 PM