I wanted to take some time to honor an old friend who recently passed away. Dianna and I knew Peg Mc Kinlay from our days back in California and most recently here in Texas. Peg and Dianna met while co-workers with Bank of America in 1995. Peg was a long time underwriter of mortgage loans with several companies and even did a stint with the Fanny Mae people in DC. Dianna and Peg lost touch when Dianna moved over to Countrywide but became reacquainted when both moved to Texas to work for Countrywide just before the Bank of America buyout.


In early 2011, Peg got some shattering news. She had been sick with the flu but after several weeks couldn’t shake a recurring cough. Her doctors were baffled and decided to get a chest x-ray to see what the problem was. A mass was spotted and a biopsy was scheduled. Peg had been a long time smoker but had quit a few years ago. By the time the biopsy was done, the mass, identified as a cancerous tumor, had spread to other parts of her body. Stage 4.
It was one of those terrifying stories you here about people who are diagnosed, suddenly take a turn for the worse and are suddenly gone. That was the way it was with Peg. The doctors gave her just a few months but those months passed quickly and so did Peg. Toward the end, she needed constant care and had to move in with her son Rob and his wife Amy in Oklahoma City. When she required 24 hour care, they moved her to a hospital. Dianna and another co-worker, Maria, had an opportunity to see Peg while she was there. Amy and Rob cautioned that Peg was in an out of reality and she may not recognize them when they came. Miraculously, for that visit, Peg seemed to be her old self, laughing and joking with her guests. She even relished a custom chocolate cupcake with peanut butter frosting, a personal favorite, Dianna and Maria brought to share with her. But, behind the laughter, everyone had a sense it would be their last meeting. About a two weeks later, Dianna learned Peg passed away.
You always comfort yourself and say it happens to somebody else but when it's somebody you know, it changes your perception of the disease and the fallout which which effects all the people they leave behind.  To help out Rob and Amy, we all pitched in to go through Peg's things she had put into storage from her Texas home while she was being treated in Oklahoma. It was a sad endeavor but at the same time uplifting. It was a chance for everyone to reminisce about the places she had lived, holidays with her grandchildren she cherished and the dinners and football games we watched at her place.
We all had a chance to laugh about having to move her beloved furniture. Over her life, she had collected an assemblage of the heaviest real wood bedroom, dining room and living room furniture you will ever come across. Getting this stuff out of two storage rooms and into a box truck for the trip to Oklahoma was a whuppin’. I think everyone who was there would agree that Peg was looking down and laughing at all of us as we grunted and shoved all that stuff into that rental truck.
Once we had recovered from that, the suggestion was made to further honor Peg’s memory by doing something positive about lung cancer and as a form of closure to a painful time we needed to put behind us.
We all signed up for the LUNGevity Foundation’s “Breate Deep DFW”  event  on November 12th, 2011 to walk for Peg and to help all those who suffer this terrible disease. We all hoped our efforts will help find a cure so other friends and family won’t have to watch their loved ones go through the same thing we all did. The event was staged at River Legacy Park, Arlington, Texas. This is a huge mixed-use public park and nature preserve  about two miles north of Cowboy’s Stadium on the West Fork of the Trinity River. There is an extra-wide concrete walkway that goes all the way around the central park for a solid mile. The entire preserve consists of several hundred acres of walking, hiking and biking trails.

Team PEG got our Tee shirts and got into the massive cue of people, dogs, runners and walkers. A few of our team (the “runners”) decided to run the route. There were mother and fathers, grandparents, brothers, sisters, little kids and big kids, all wearing their patches, many survivors of this terrible disease. 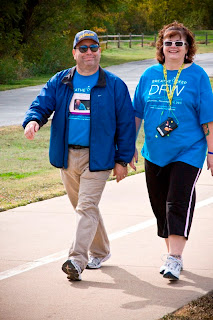 Dianna and I made two circuits before stopping for free drinks and munchies. I think everybody had a good time and took something away from the experience. Peg, it was a pleasure knowing you. 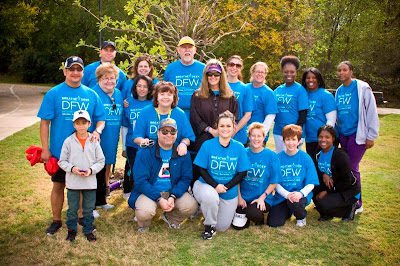 Posted by Nick Saraceni at 1:11 PM