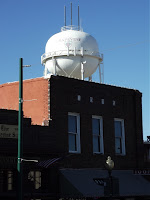 As Texas cools down and the holidays are now finally behind us, we decided on a little hop to Grapevine, Texas to visit the historic downtown area, grab a bite to eat and sample some wine. We have been to Grapevine several times. It is the home of the Gaylord Texas, one of our favorite places for a getaway weekend, as well as Grapefest where they close down Main Street into a pedestrian mall and you can find the best food and Texas wines around.
On this beautiful Saturday, we learned a co-worker of Dianna’s, Kara, had cousins in town visiting from Kansas City and were touring wineries around Grapevine. They offered to meet at one of their stopping points to grab something to eat and sample some wine. 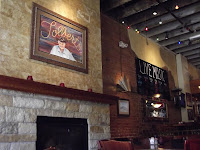 When we arrived, they were still on the outskirts of town making the rounds at the tasting rooms. We were starving and had to make a visit to Tolbert’s restaurant for lunch. Dianna had one of her Texas favorites, Frito Chili Pie, I had the Teacher’s Salad (not sure why they call it that) and, on my latest health kick, had a slab of grilled Salmon on top.
Tolbert's Restaurant first opened in Dallas in 1976. The restaurant was started by Frank X. Tolbert Sr. (1912-1984) and his son, Frank X the 2nd. Frank Sr. was a Texas journalist, historian, storyteller and Chili aficionado. His books on Texas history, novels and short stories were his distinctive contributions to the literature of the Southwest. He was also co-founder of the famous Terlingua Chili Cook-off, which is held the first Saturday in November, in the Big Bend Area of Texas.

The chili was a tad spicy and it made one unable to discern the various flavors like the beef, onions and cheese and almost overwhelmed the Fritos as if the concoction had been simmering in the brew for some time. Perhaps a fresh batch would have been an improvement. When I took a taste, it just tasted like jalapeño soup. But we like spice…this was the kind that continued to burn your lips long after the chili was gone.

My salad was very fresh with a giant slab of grilled Salmon on top. Grilled just right where the fish was consistently pink throughout with just a little crunch on the exterior from the hot grill treatment. No rubs or coatings for this baby, it was just a load of heart healthy Omega-3s. The salad was a good mix of greens with a couple of slices of Avocado to boot. 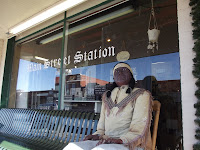 Full up from Tolbert’s, we wandered down to one of the many antique/boutique mini malls along downtown, called the Main Street Station. Main Street Station was constructed in 1916 by local builder Frank Estill. The building is historically referred to as the Western Auto Store, which moved into the business in 1937 and operated there for many years. The building is characteristic of automobile sales and service centers of the early 20th century. The cavernous inside still shows off the original pressed metal ceiling. Usually, weather permitting, you will find Navajo Joe on the front porch relaxing in his rocker, always ready to greet shoppers and other passers-by.


Owner since April of 2000, Doris Solomon is a rather special woman in her own right. After graduating in Baumholder, Germany, she served in the US Navy as a Parachute Rigger. After leaving the service, she became one of the first women to be a cable TV installer in the great state of Nebraska (that had to be a cold and thankless job in winter). Now she calls Main St Station home. Doris' business philosophy is simple. Keep the feeling of a small hometown store where your customers feel at home. Make it fun and create the desire for your customers to come back and stay a while.

The cool part is walking around to all the little vendor booths and checking out the wacky collections and creations of the artists who sell there. 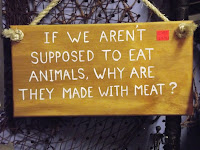 While tooling around Main Street, we finally got a text from Kara that they were heading to La Buena Vida Winery on E. College Street. A short walk from Main Street into Grapevines old residential neighborhood just east of downtown. Turn the corner and you move back to a place where most of the homes date back to the late 1890’s. The coolest thing is the area is zoned for residential/commercial mix. Because of this, there are wineries right next door to regular homes. What a concept, if you forgot that bottle of Zinfandel for dinner, you can walk next door and pick up one. What a great country! 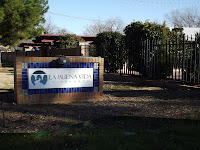 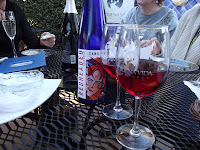 We made our way to La Buena Vida to the sounds of live music and dancing children in a large courtyard facing the street. We entered the store and located a bottle of Red Haired Step-Child. This is a Texas Sangria sweet wine with a squeeze of lemon juice in the mix from La Buena Vida’s winery in Bryan, Texas.


The owner, Gina Puente-Bracato, started supporting her family’s concessions business at DFW airport after graduating Texas Christian University (TCU go “Horned Frogs”) in 1991. Apprentice to her Dad, she got the entrepreneurial bug and decided to open a wine business at DFW and opened La Bodega, the first wine fully functioning winery in an airport. As she became more successful, she began La Buena Vida Vineyards in Bryan, Texas to support the wineries she had at DFW (now two) and La Buena Vida in Grapevine.
We sat listening to the Jet Poets, a guitar duet singing mostly rock classics from the 80’s and 90’s. As they brought our Tuscan Board cheese and salami plate out to us, Kara and her cousin’s Becky and Teresa walked up to our table. Mind you, they had already been following Grapevine’s winery tour list and had been sampling wine for about two hours before they got to La Buena Vida (#7 on the tour list).

Kara and Teresa seemed to be holding up well, but Becky was clearly feeling no pain. They ordered a Mediterranean platter (with ginormous Italian olives) and got an excellent bottle of sparkling wine. Well, it was a champagne style wine. As you know, you can’t call it champagne unless it’s been made from 100% Pinot noir, Chardonnay and Pinot Meunier grapes from the Champagne “appellation” region of France. the name Champagne is legally protected by the Treaty of Madrid (1891). Those French people ruin everything. 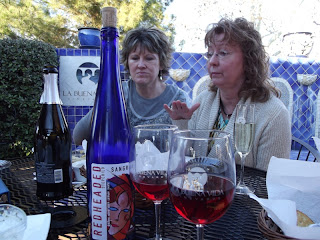 Becky and Teresa are both teachers back home and we got into a spirited discussion of the vagaries of teaching and the thankless but sometimes rewarding job it can be. Kara also aspired to teach at one point and we got to hear about her substitute teaching experiences. Kara recently moved back here from Kansas City. Kara had been working with Bank of America here in Texas and had transferred back to Kansas City for a time but had just moved back to Plano and back to the Plano office where Dianna works. She is Italian through and through and is a “no holds barred” girl after a couple of glasses of wine if you know what I mean. 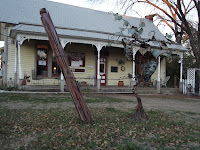 As the sun set and the temperature followed, Kara and crew wanted to hit one more stop on their winery tour, Homestead Winery on E. Fort Worth. Another neighborhood winery, Homestead is housed in a former family home built in 1895. The owners report they are beginning a remodel to bring the home back to its earlier Prairie style clabbered home. When we arrived, we could see it was in need of repair and propping up. Many homes in Texas suffer from settling. 211 E. Fort Worth Street was no exception.
Homestead’s floors were sagging so badly, it made walking (and standing for that matter) difficult for poor ole’ Becky. Becky didn’t have her sea legs on this trip. Like watching someone try to navigate the tilted floor at the fun house with the deliberate walk of the inebriated (come on, you all know what I’m talking about). The ground floors sagged in the middle creating a valley, which required you to walk down then up to get to the other side of the room. Becky tried her best but Teresa came had to come to her aid to save her from falling. Then there was the awkward moment in the bathroom where Becky entered but the uneven floor made it almost impossible for Becky to gain a perch on the throne and the door unable to close because it was eschew like the floor caused some uncontrollable little girl giggling…well it was pure entertainment.
﻿﻿﻿After downing several more “samples” of great tasting Texas wines, we called it a night and after pouring Becky into the front seat of Kara’s car, sent them on their way back to Plano to wear off the day. We too made our way back to our own car and home.
Posted by Nick Saraceni at 8:13 PM