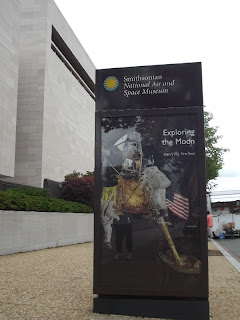 As many of you know, I have been fascinated with aviation all my life. My first memory of flight was with my Dad when I was about 6 or 7. It was a crisp, sunny Saturday morning when he took me along to do some errands. Dad pulled into the MacArthur/Long Island Airport   in central Long Island a few miles east of our Deer Park   home. We drove along the rows of airplanes until he saw a couple of men working on a Piper Pacer tail dragger . We got out and my Dad asked if I could get inside and look around. They agreed and I got to climb in. I was hooked. All the dials, knobs and levers had little meaning then but I knew I wanted to learn all about them and fly one day.


So we found ourselves in Washington D.C., which probably has the highest concentration of aviation museums on the planet. I only made two hard and fast rules for our agenda while in DC. We had to go to the Smithsonian Air and Space Museum downtown and at the Udvar-Hazy Center at Dulles International Airport in Chantilly, Virginia. The second was to go to Arlington National Cemetery. The rest would be icing on the cake.


Bright and early our second day, we booted up Patty for the trip back to the east side of DC to the Smithsonian neighborhood. I say that because the Museum resides in a district of Smithsonian museums stretching from the I-395 on the east to 12th Street to the west. If you were just to do the Smithsonian series, it would require about two weeks to hit them all. Forget the rest of the city and its collection of art and history museums.


We quickly discovered here are no open public parking lots. There are parking metered spots along the streets but these are hard to find and limit you to two-hour maximums. We also saw lots of tow trucks and tickets tucked under windshield wipers. Luckily, there are many day-rate or hourly underground parking lots in most commercial buildings throughout the city. Just make sure you know when the lots close or you’ll be out of luck.

Once we tucked away our rental, we made our way to the museum. Like so many buildings in DC, it's huge. The Air and Space Museum takes up almost the entire block. You might expect it of a building that contains full-size aircraft and rockets. There is enough room to house the entire front fuselage of a 747 (Northwest Airlines) like the scene in the movie Airplane! (1980).

The various anti-rooms contain theme aircraft depicting the different periods of flight from the Wright Brother's Flyer (nope, the real thing not some recreation) to the Space Shuttle. That's what I loved the most. In a lot of museums there are recreations of famous aircraft but here, when you look up and see the Spirit of St. Louis, it's the real deal. The one Lucky Lindbergh flew from Roosevelt Field in Long Island and set down in Paris on May 20, 1927.

There was the X-1 that Chuck Yeager flew to break the sound barrier and the X-15 the first aircraft to make it to the edge of space. All eight X-15 pilots were awarded Astronaut status because they exceeded 50 miles above the Earth. Oh heck, just look at some of the photos:

From my childhood I recall two big events. The day President Kennedy was assassinated and the first landing on the Moon. I didn't realize the significance of the first for quite a while but I followed the space programs from Mercury to today with a passion. So coming up-close and personal to the Apollo 11 Command Module was like finding the end of the rainbow, thus the picture: 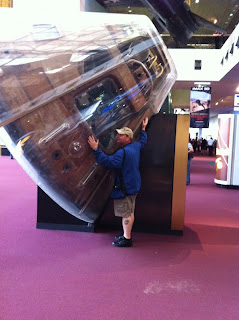 Once we left the Air and Space Museum (I could have spent the entire week there but they probably would have asked me to leave at closing time) we then went to Dianna's list. She wanted to see the National Art Museum and National Portrait Gallery. Each within easy walking distance. These museums are chock full of the finest art in the world. We got to walk right up to a Da Vinci and a Rembrandt. There was a European side and an American art side which went from the classics to modern artwork. I wasn't aware of this (well....I'm not a big art guy) but you can ask to set up and paint a copy of anything in the place as we watched while this artist copied "The Mill" painted between 1645 and 1648 by Rembrandt Harmenszoon van Rijn (Ok, now we know why everybody just called him Rembrandt). 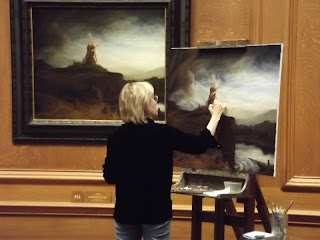 On the way to the National Portrait Gallery, we walked through the National Gallery of Art Sculpture Garden. Really cool pieces, some spoke to me more than others. 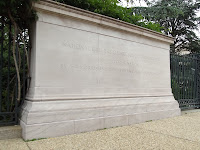 But then there was an awesome sitting area around a terrific fountain which had 10 nozzels sending parabolic streams of water from its circumference toward its center in a water ballet.

We made it to the National Portrait Gallery where all the Presidential portraits can be seen along with influencial Americans and some Lincoln memorabilia like a set of face masks and hand moldings of the President in the early years of his Presidency. The masks and moldings of his hands were done in anticipation of creating busts and sculptures of Lincoln during and after he left office.

That was all the walking we could muster for that day so we asked Patty to get us back to the hotel to put our feet up and reflect over the days journey. But then to Ted's Montana Grill luckily three blocks from the hotel.  I had visited Ted's when my co-workers and I were there in February. Still a great menu and service. I had the Cedar Plank Salmon and Dianna had the Classic Steak. 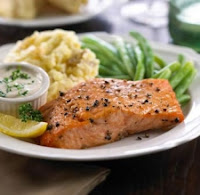 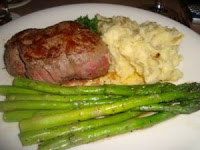 Posted by Nick Saraceni at 7:02 PM