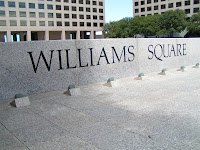 In the early 1970s, Dallas businessman Ben H. Carpenter converted his family ranch into a residential and business development called “Las Colinas”. Carpenter wanted the center piece of this commercial development to be a larger-than-life sculpture of a group of wild mustangs fording across a stream. 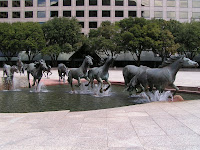 As many of you may know, there are no native horses to North America. All the horse breeds we have are derived from those horses brought to the New World by the early explorers. Mustangs, in particular, were Iberian horses brought by the Spanish. A lot of cross breeding has occurred over the years but they draw their lineage from the original Iberians. The Iberian horse is a title given to a number of horse breeds native to the Iberian peninsula (Spain, Portugal). At present, no less than 18 horse breeds are officially recognized. 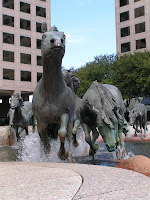 Iberian horses are thought to be one of the oldest types of domesticated horses. Modern Iberian breeds tend to be of a Baroque horse type that resemble their most famous member, the Andalusian horse, in “conformation” (the degree of correctness of a horse's bone structure, musculature, and its body proportions in relation to each other).


In 1976, Mr. Carpenter commissioned African wildlife artist Robert Glen to bring his vision to reality. Glen spent a year researching and studying the history of the mustangs to better understand his subject. For his sculpture, Mr. Glen discovered a line of horse with the same pure bloodlines in Southern Spain. He used these horses as the models for his sculpture. 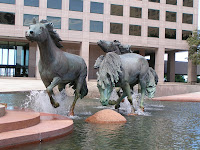 Working from his studio in Nairobi, Kenya, Glen made scale models of mustangs in various poses to help him work out the design of the sculpture. He then made ½-life-size models of the horses. For the next step in the process, Glen made life-size fiberglass molds of these models and shipped them to a foundry in England. 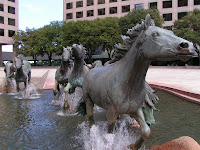 After an elaborate course of creating positive and negative molds, the foundry completed the bronze casting in November 1981. The mustangs were shipped by air from England to Irving, Texas, and after the intricate procedure of mounting the figures, the Mustangs of Las Colinas sculpture was dedicated on September 25, 1984.


The plaza itself is massive (rather stark really) and sits in the center of a three building complex known as Williams Square on N. O’Connor Blvd. in Irving, Texas. Some of you may recall seeing the plaza and sculpture from a recent Travel Channel documentary for the opening of the new TNT Dallas series. The plaza and sculpture were depicted in an episode from the original CBS series. 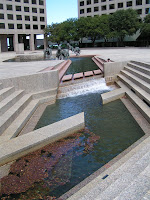 The sculpture consists of nine horses in a line as if galloping through a stream bed. The running water of the stream cascades down into a steeper canyon formed from granite tiles. The canyon has steps for sitting right down to the edge of the stream where one can sit and dip their feet in the cool water. Must be a great place for workers and visitors to take a nice relaxing lunch.

Posted by Nick Saraceni at 8:43 PM