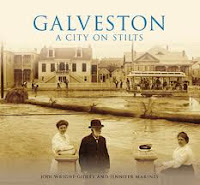 On to Galveston for another cruise to Mexico to reflect on life,  our relationship and drink whatever copious amounts of alcohol that our host Carnival can provide.

Note to reader: Normally, being the type A that I am (yeah...right) I would have immediately put pen to paper to enlighten and hopefully entertain you about our recent cruise. But, when we got home, we learned that the Carnival Triumph follow-on cruise was capturing the world's attention as it floated, powerless, off the coast of its first stop (and ours) Progresso, Mexico. So I held off writing this until the ordeal concluded, thankfully successfully, in the port of Mobile, Alabama. Interestingly, a cruise terminal Carnival had once used extensively and abandoned in an earlier downsizing by the company in October 2011.

After five days at sea first at the mercy of the currents and wind then towed several hundred miles back to Mobile and safety. I'm sure you'll see news stories to describe the experiences of the guests as well as the crew and there will, no doubt, be a plethora of investigations to determine the cause and effects of the on-board fire that struck the great ship impotent. I can only imagine the stories the couple who got married on-board will be telling around campfires and anniversaries to come.

Driving south from Dallas or any major metropolitan area of Texas takes you from bustling metropolis to instant rural backwater. It's not a gradual passing. One minute you're amongst tall buildings bristling with cell towers and the next it's pastures, cows and horses standing at the fences watching the cars and trucks whizzing by.

You drive about five hours and the cows and horses become fewer and farther between then the suburbs of Houston approach and you're back to urban sprawl. A little farther south you pass the Johnson Space Center then skirt the Texas City oil refinery complex where 40% of all the gasoline  in America gets produced, hit the causeway and cross over to the sleepy island of Galveston. 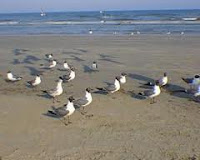 The trip to Galveston was also our chance to see how they've recovered since hurricane Ike, the big storm of 2008. The last time we were there, for a cruise to the western Caribbean, was three months before that terrible storm. The change was stunning. The whole seawall district has been remade. Where once torn and twisted piers stood, are new pilings holding up a new entertainment venue called Pleasure Pier (I know, it had a different connotation when I first heard of the place). Kind of looks like the Island of Lost Boys in Pinocchio.

Of course being neither sports fanatics or crazy party-goers with a penchant for wearing brightly colored beads or flashing people (....well, I can't speak for Dianna), we unknowingly timed it just right (sarcasm just doesn't come across in print) that it was both Mardi Gras and Superbowl weekend in Galveston. Yes....we need to get out more.

We did our usual drive-about of the island and discovered a treasure trove of new beach houses (ah, didn't they get the memo about the hurricanes?), now on really tall stilts. We had seen houses on stilts before but these babies were double the height of the older homes we saw. Somebody must have updated the building code. 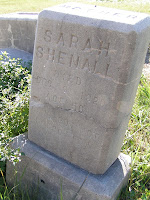 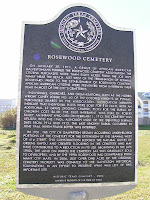 Just looking out of our hotel window we discovered an old cemetery right next door (Ok...a little creepy). Rosewood Cemetery was set aside in 1911 as a resting place for the African-American residents of the island. Back in the day, cemeteries were segregated like bathrooms and eating places so the city acquired the land for that purpose. As the years went by and cemeteries became integrated, the lot fell into disrepair and developers began annexing the land for commercial use. the original 8 acres has been paired down to what is now a single acre and has a handful of visible headstones. Makes you wonder where all the others went to not to mention the adjoining lots with other hotels on them, ahhh like the one we were in.

With the increased number of tourists comes an increase in traffic and drunks. To avoid collisions we stopped at our favorite watering hole, Captain Jack's, in front of the Holiday Inn Sun-Spree (weird name) hotel overlooking the sea wall. A favorite of the natives, it affords a thatched roof shelter enabling us to consume the $5 Margaritas at Happy Hour as we people-watch those walking or jogging the seawall. Hey, why do they call it "Happy Hour" when it lasts from 4 to 7? Shouldn't it be "Happy Hours"? The whole thing becomes moot after the second plastic cup of manna rushes down your throat like that first drop at Pirates of the Caribbean. 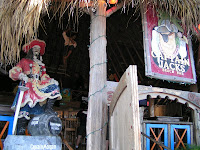 I asked the bartender how they made out with the last hurricane. She said the bar had been completely wiped away. The bar is on a raised concrete platform right across from the seawall about four feet above the sidewalk. It was pretty much wiped clean and completely rebuilt. As a tribute, the statue of Captain Morgan was returned to his rightful spot  at the entrance but was not repainted as a reminder of the devastation. The Captain stands in his classic pose greeting all who come to repose.

The day of sailing was briefly marred by an urgent email we received stating our ship, the Carnival Triumph, was delayed returning to port because of a mechanical problem (ooohhh...queue the spooky music) delaying its arrival and our subsequent boarding. No biggy...it gave us (me) more time to check out the 1900 Hurricane Museum and Elissa tall ship exhibit at Pier 21.

We discovered the Pier and Museum had suffered major damage in the hurricane. Pier 21 is on the northern side and overlooks the Port of Galveston. Although the hurricane had its effects on most of the island, the port had a double whammy of wind and the storm surge that came up through the shipping channel and arced into the port driving the waterline much higher than  the docks and structures.The pier, museum and restaurants are slightly higher than street level but the museum folks said the surge came up over the pier and brought in around six inches of water into the museum. The Historical Society was able to get some FEMA money to rebuild the pier and the maintenance workshop for the Elissa iron Barque (pronounced Bark) tied up at the pier. If you've been to the Island, you know they have a wonderful theater where they show a great documentary about the 1900 hurricane. They are still working on getting it operational.

As I mentioned, there is the wonderful iron Barque Elissa alongside the museum. The ship has an interesting tale to tell much of which has to do with its refitting and return to Galveston. 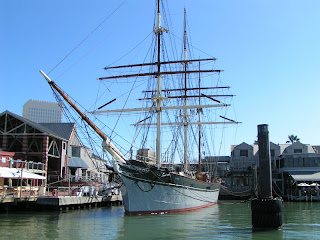 Elissa was built in Aberdeen, Scotland as a three masted merchant vessel in a time when steamships were overtaking sailing ships. She was originally launched on October 27, 1877. Elissa is named for the Queen of Carthage, Elissa (more commonly called Dido), Aeneas' tragic lover in the epic poem The Aeneid.

In 1970, she was rescued from destruction in Piraeus after being purchased for the San Francisco Maritime Museum. However, she languished in a salvage yard in Piraeus until she was purchased for $40,000, in 1975, by the Galveston Historical Foundation, her current owners. In 1979, after a year in Greece having repairs done to her hull, Elissa was first towed to Gibraltar. The restoration process involved removing all the post-refurbished stuff returning Elissa to her original three masts and sails and continued until she was ready for tow on June 7, 1979 where she was brought to Galveston for completion and display.

Elissa made her first voyage as a restored sailing ship in 1985, traveling to Corpus Christi, Texas. A year later, she sailed to New York City to take part in the Statue of Liberty's centennial celebrations. She was the oldest ship to sail in the tall ship sailing cruise. 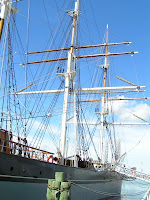 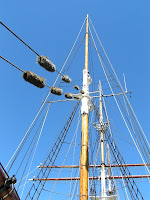 Ok…..piece of sailing trivia. What's the fuzzy thing on the line above the yard arm? Well of course.... it's Baggy Wrinkle, Dana. It stops the line from rubbing against and abrading the sail. It's made from many individual short lines tied together and their ends frayed to create a big furry muffler-like bumper for the line.

Because we had some time before boarding, we decided to take an hour tour of the harbor. The port has always been a lifeline port since the Spanish occupied it back in 1816. The Spanish gave way to pirates that helped Mexico rebel against Spain. The pirate Jean Lafitte organized Galveston into a pirate "kingdom" he called "Campeche", anointing himself the island's "head of government". Lafitte remained in Galveston until 1821 when he and his raiders were run off by the fledgling US Navy.The Port was established in 1825 and, after the Texas Revolution, became the new country’s capitol in 1836. By 1839, the city was by then a burgeoning port and attracted many new residents among the flood of German immigrants to Texas in the 1840s and later, including Jewish merchants.

Because of it's importance, its played a major role in the building of America.  Because of that, Galveston became one of the most advanced and wealthiest cities in America in the late 1800s. First all-electrical city and playground to the rich and famous. Galveston was considered  an important financial center in it's hay days some say equal to New York or San Francisco. Just as important as New Orleans in the exporting of cotton, beef and importing of manufactured goods, it was a strategic holding for the South in the TWONA and came under blockade by the Northern Navy to stop the flow of goods supporting the Southern economy. 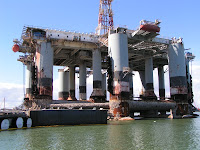 Although still an important port today, it really lost it's edge when the great storm of 1900 came through.  Because of the devastation, shipping moved north into the Houston/Texas City river channel and never really came back to pre-1900 levels. It is still an important port servicing the vast number of off-shore oil and gas derricks in the Gulf.

Galveston suffered a huge loss of life and many of those who survived decided not to rebuild and moved elsewhere.  But because of that storm we forever changed the way we predict and report the weather world-wide probably saving thousands.

Added bonus, with your tour ticket, you get a discount at the Pier 21 restaurant, Willie G’s right next to the museum. It was such a nice day, we were able to sit under the canopy at a table on the pier. Lunch was a Salmon salad for me and Dianna had the fish and chips. Vacations for us tend to result in excessive alcohol consumption so we added two Marti Gras special drinks as well. Hey....we had to get the cool collector cups and "free" neck beads....well worth the extra cost.

Back to reality, as with all cruise endeavors, we were once more run through the human grinder that is the check-in and boarding  process.  Serpentine chicanes turning left and right leading inexorably to a bored clerk swiping passports and asking us if we had the flu or didn't feel well. When this medical expert was satisfied we were not contagious, we were allowed to walk the gangway to our floating buffet palace. Next installment....the road to Progresso or how not to row a kayak.
Posted by Nick Saraceni at 5:49 PM