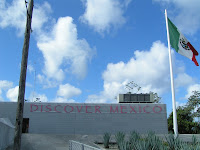 This was, after all, only a five day trip so we did a quick overnight run to our second and last stop, Cozumel. We had been to Cozumel a couple of times before and had decided to do another run at the Discover Mexico park and then a couple of hours at the Channapa National Park and take in the food (and beverages) offered at the resort.

It was our second trip to Discover Mexico, a combined effort of the City of Cozumel 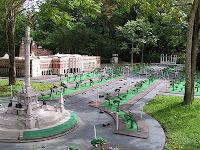 and the Mexican Tourist and Visitors Bureau. Interesting little museum of cultural art and a Tequila tasting and educational seminar.  But the gem are the miniatures in the cultural park.  These exhibits tell the story of Mexico's past from the Mayans and Inca  through the Spanish and French occupation. These are well crafted miniatures of important Mayan and Inca cities and temples as well as significant examples of Catholic Cathedrals and French Baroque structures including the Presidential Palace in Mexico City. 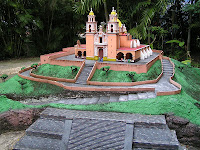 Cool story about the Mexican Flag. Many of you may know the flag has, as it's center piece, the Mayan symbol of the eagle holding a snake in its clutches.  That was the sign Mayans were looking for to lead them to the place their followers were to establish the center of their culture and religion. The Mayans traveled the land waiting for this sign and found an eagle clutching the aforementioned snake in the dry lake bed which is today, Mexico City. Now I am well acquainted with the history of the Mayan people and their great artistic and scientific accomplishments. But clearly they didn't get the memo about building a major city on a former lake bed. This has not worked well for the current residents in that their city (the 3rd most populous city on  the planet at around 18.7 million residents) is estimated to be sinking at a rate of about 8 inches per year. Here is our very energetic tour guide Jose Chucho:

That leads to how Mexico got it's name. It has to do with the location of the city and the alignment of the earth, sun and moon.

The old Mexica city is now referred to as Tenochtitlan. The Mexica were one of the last of the Nahuatl-speaking peoples who migrated to this part of the Valley of Mexico after the fall of the Toltec Empire. Their presence was resisted by the peoples who were already in the valley, but the Mexica were able to establish a city on a small island on the western side of Lake Texcoco. The Mexica themselves had a story about how their city was founded, after being led to the island by their principal god, Huitzilopochtli.

According to the story, the god indicated the site where they were to build their home with a sign - an eagle perched on a nopal cactus with a snake in its beak. The great city Teotihuacán, anchored by the great Pyramid of the Sun (third largest in the world), the building plan and orientation of the buildings at Teotihuacán were built in alignment to the rising and setting of the Pleiades star cluster (as are the pyramids in Egypt) as well as the unique alignment with the setting Sun which casts a shadow of a serpent (Kukulcan/Quetzalcoatl) descending on the northern steps of the pyramid. 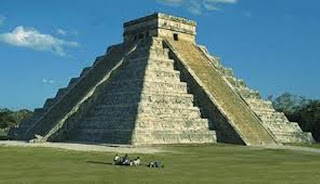 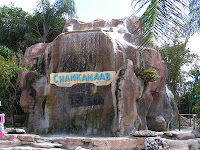 We were then loaded onto a series of Mexican cabs for the ride to Chuapanna. The resort is on the west shore with some of the best snorkeling around. Not wanting to indulge in the water sports, we (well....I) were hungry and we dined at the La Laguna Restaurant. The heavily weighted seafood menu did have some good Mexican standards. Dianna opted for the tostados with chips and guacamole and I had my replacement chicken burger and fries (still watching my girlish figure, no fries). But the best thing was the two classic Margaritas. I know, you ask, what's the big deal with the drinks. Well.....in tourist resorts, where they want you to spend a lot of money, they tend to overshoot with the alcohol, not like the paltry bars and nightclubs in America. After two Margies a piece...we were feeling no pain. After a little birthday shopping for Dianna...we caught the next taxi back to the pier for more shopping and the jog back to the ship. 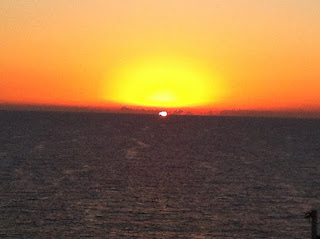 The last day on a cruise is kind of a let down. Of course all good things must come to an end and your last hours are spent folding and packing your things so the cabin steward can get your stuff below for the transfer back to the pier. Then there is the reverse cattle call of getting off the ship, finding your stuff and lugging it to Customs so they can clear you back in. It's funny to catch yourself and others putting on your best "Don't Tase me Dude" look of innocence even though you haven't done anything wrong but fear the increased scrutiny will sweep you away to secondary and might uncover the fact you may have brought back more alcohol than you're allowed.......not us, nope.

Like prisoners given a reprieve, we made our way back to the awaiting Rogue and after punching in our next destination, Georgetown, Texas, we were off to visit our longtime friends, Scott and Silvia.

Stay tuned for life in Sin (opps..) Sun City and life of the truly retired.
Posted by Nick Saraceni at 11:30 AM