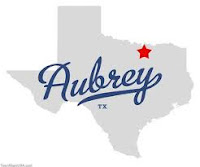 As some of you may know, I have changed jobs and left the Frisco Police Department to go "private sector" with a security firm that provides site security for the U.S. District Court in Plano, Texas (among others) in conjuction with the U.S. Marshal's Service. I have joined a band of "merry men" (no...not in tights) who do entrance security ala TSA, courtroom security while in session, and video surveillance of the interior and exterior of the courthouse. A true bunch of pistol-packing old guys doing our bit to protect America. 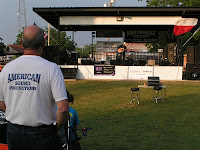 One of of my brand-spanking-new friends is Doug. Doug, I have learned, has a most varied résumés as anyone I've met. Doug has been a Constable and Deputy Sheriff with the Denton County Sheriff's Office as well as a bunch of other things I cannot possibly list in this writing. But one thing that he's really passionate about is the music business. He's not only an accomplished musician in his own right, he also has a business as a sound engineer. As , he's the guy you hire to wire, light and amplify for live music venues. Dianna and I love open air music events and Doug invited us to one he was working on in the town square park in  Aubrey, Texas. 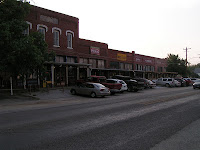 Aubrey was officially founded in 1867, when Civil War veteran Lemuel Noah Edwards (1838–1910) built one of the first homes. Aubrey is about twelve miles northeast of the city of Denton (county seat of Denton County) and forty miles north of Dallas in northeastern Denton County. The site was originally named Onega (Ornega, Ornego) when the Texas and Pacific Railway built a section house there in 1881.The name was not very popular so in typical old west style, the name Aubrey was drawn from a hat to replace the name Onega.

Although the Key Schoolhouse settlement, established in 1858 by Dr. George Key, was only about a mile from what became the downtown part of Aubrey, Edwards, a Civil War veteran from Alabama, is given credit for founding the town. He built the town's second house, a large, imposing, two-story structure, of lumber hauled from Jefferson in 1867. He then eventually gave each of his 10 children (holy cow, I wonder how Mrs. Edwards felt about that) a lot on which to build a home.

After the first businesses, east of the railroad tracks, burned in 1887, the town was rebuilt west of the tracks, where it stands today (as well as the railroad...more on that later). By 1920 Aubrey had more than thirty businesses and a population of 700. The automobile, the boll weevil, and the Great Depression contributed to the decline of the population over the next several years.

By the 1980s peanuts had replaced cotton as the number-one crop; an annual average of 3,000 tons is processed in the local drying plant. The sandy, fertile land and the moderate climate have attracted many horse ranchers to the area, which, according to some, is becoming the "horse capital" of Texas. Other farm products include cattle, hay, fruits, and vegetables. In 1986, Ray Roberts Dam was completed nearby on the Elm Fork of the Trinity River which has boosted the economy and has added to the towns growth of new home development. 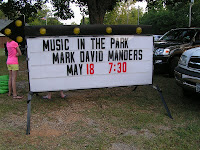 Back to the concert.  It was a remarkable late spring day in North Texas. The temperature had soared to 90 but a strong southern wind was able to keep the humidity in check and quickly cooled temperatures as the sun set. We booted up Patty for the 30 minute ride from the homestead north to bucolic Aubrey. The park was just a green patch, just less than an acre, with a neat covered stage at one end. The Summer Concert "Music in the Park" series is sponsored by the Aubrey Economic Development Corporation and several town businesses.

Dianna and I had packed our usual wine refreshments with two clear plastic cups and our trusty PVC folding lawn chairs. I went to the little snack table and bought a Snickers Bar for Dianna and a small bag of M&Ms for myself (chocolate really goes well with wine). We initially sat to the left of the stage, well back in the growing crowd but when Doug came up he insisted we sit just behind his chairs in "sound central" to get the best effect. 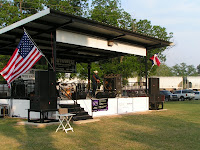 We sat as the opening act, a local singer-songwriter named John Rutherford, sang for the late stragglers and allowed Doug to fine-tune the sound for the main act, Mark David Manders , another singer-songwriter based in Plano, Texas. 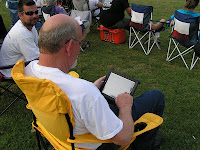 As John Rutherford strummed and entertained, we all got a reality check and discovered how it is to live in rural Texas. Remember that railroad track that runs through town? Well it actually runs right behind the park stage and every hour on the hour, a large Union Pacific Railway freight train would announce its arrival and roll for several minutes as it made its way north or south of town. John would stop each time it passed and then continue. 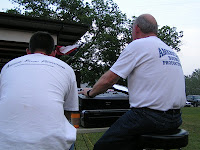 As the sun settled in for the night, Doug moved his operation to the light board a few feet away. You wouldn't know it by looking at him, but Doug has got "techie" written all over him. Doug is a "60 something" but has almost completely automated his sound system using his iPad (yes...there's an app for that). Wirelessly, he stalks the venue listening and tweaking his sound to get the most out of the players and the equipment. He finally settled in at his light board to paint the stage for mood and accent. 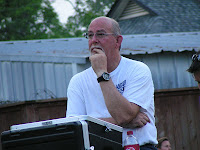 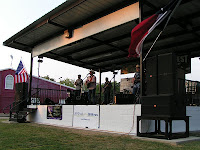 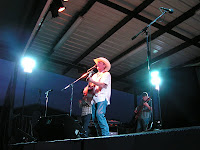 When Mark David Manders and his band took the stage bringing Bob Wills and Merle Haggard standards with them, they too had to suffer the train and horns but would immediately break into a "train Country song" (think Johnny Cash "Folsom Prison Blues") until it passed. Mark's band was great but his fiddle player was really phenomenal. Manders and the boys went on for about an hour and a half and at one point brought a gaggle of little girls up on stage to help him on a rendition of   "I'm Alright"   and then did his seminal work "Beer". To close, Mark even did his best Mick Jagger imitation for a rendition of "Honky Tonk Women" the 1969 hit song by the Rolling Stones. Not bad, if I say so myself. 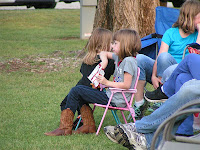 As we listened and watched, it came to me we were witnessing a scene that has been playing out throughout America for decades. Just folks sitting, eating and drinking mindful of their little ones running about in their own world ignoring the music but more about time away from their regular Monday through Friday lives. Laughing, joking and toe tapping. The American and Texas flags waving in the wind. It was good and clean and it was America. It really doesn't get any better than this.
Posted by Nick Saraceni at 2:32 PM