The night before Father's Day found us in 90 degree/90% humidity as we made preparations for another concert in the park at  Aubrey, Texas. My new best friend Doug (as American Sound Productions) was again doing sound and lighting for the 2013 Concert Series and invited us along. This time he brought along my former co-worker Brandon from the Berean Blast Fest and Doug's grandson Brandon. Yes, it can be confusing in that Brandon seems to be a favorite name in the family.

The show wasn't scheduled to start until 7 so I wanted to get there early so we could indulge in some of Aubrey's restaurant faire. After all...one has to have the energy to partake in any decent Country Music event. There are several to choose from but last month we got to the concert too late to try Lucy's Moms On Main.

At 204 South Main Street, in the historic district, finds your old family style cooking you can really sink your teeth into. Mom's has a huge menu of Southern comfort food to satisfy any size hunger you might have.

Dianna had the Chicken Fried Chicken and I had the Pot Roast. Giant portions and a huge selection of sides (Mashed potatoes, French Fries, corn, green beans, fried okra, pinto beans or baby Lucy salad, and a fresh yeast roll) that you get to choose two from. Dianna had the corn and a house salad (Lucy salad). I had the green beans and a salad as well. 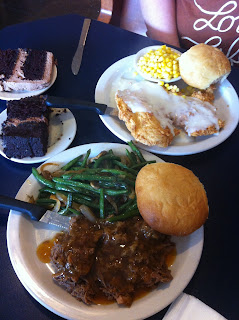 Well...I have to make note of my beans. Freshly cooked and swimming in a pool of sautéed onions and slices of mushrooms. And somehow we ended up with the yeast roll too. Oh yeah....because we were first timers, we each got a slice of their chocolate cake to boot. Wow....buckets of sweet tea for everybody and a really great value. We boxed the cakes for later in the show and, with spanking new Rocks in my Sandals canvas chairs, cotton candy from the Girl Scouts and bottle of red "Barefoot" Moscato wine, made our way to center stage.

The headliner was Tommy Alverson and his band but a little bit about the opening act. Roo Arcus  is a native of Australia and somewhat of a Country icon in his home country. Nobody (well...me) really thinks of Australia as this land teaming with Country artists and music but then again, Keith Urban is, after all, Australian.

Turns out Arcus is a working cattleman who took time out to enter into the Country Music world back in 2000 garnering him three top ten singles, two golden guitar nominations and winning the independent male rising star award. But things got complicated when his mom passed away and he was forced to return to the family ranch to rescue it from severe drought affecting the family's southern tablelands cattle property. He returned to the farm and walked away from his singing career. It took him eight years but he was able to re-enter the Australian Country music scene. Roo didn't waste any time and quickly was rediscovered by the music crowd.

With a combination of his own stuff and a few well chosen songs from some Nashville regulars, he quickly climbed the charts and the title song of his premiere album "This Here Cowboy" was chosen as the #1 song on the Australian Country Music Radio (CMR) Country Tracks Top 50 for 2012. Listening to Roo is like hearing a young George Strait, or a fledgling Alan Jackson. He's that good.

Back story is that Arcus just happened to be friends with one of the concert organizers. Roo is on his first vacation to the United States and was passing through Aubrey on his visit. Roo was particularly happy to be here in that it's winter in southern Australia where he calls home and on this day it was below freezing there.

For this particular concert, they hadn't scheduled a warm-up act for Alverson so friends asked him if he would open for the band. Thankfully he agreed and treated us to a great show. I couldn't help but wonder....how is it that a hard-core Australian can lose his accent as soon as he starts singing...somebody has to study this. Take a listen for yourself.


Arlington, Texas  based Tommy Alverson is an independent singer-songwriter with a decidedly Texas blend of country, swing, Tex-Mex, Southern rock, folk and blues. I believe Tommy would agree with me that he has a real Willie Nelson bent which is more evident as he even went as far as producing one of his albums calling it "Pickin on Willie" which worked off the roots of the traditional Country music that both Tommy and Willie play.

No Country-Pop here folks, lots of traditional numbers from Willie and Roger Miller and Tommy. Typical of that genre was a neat little piece Tommy played that his son Justin wrote called "My Hometown" where he reflects on the simple life and slower pace of Itasca, Texas where Tommy was raised. Here's "Tear Joint" from his album Hero's and Friends.


All-in-all a great show interspersed with railroad trains passing every hour and threatening rain passing overhead. We hope to make it out to Aubrey next month and try the new Upper Park Cafe that just opened down from Moms.
Posted by Nick Saraceni at 8:11 PM