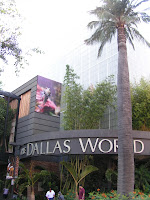 Dianna and I are die-hard aquarium people. When the suggestion came to meet with friends at the  Dallas World Aquarium we jumped at the offer. With friends Doug, his wife Betty, son Billy and grandson Owen we slogged our way through lanes choked with baby strollers, phone camera armed giggling girls and throngs of Asian tourists that moved like schools of fish suddenly turning as one on the silent commands of their leaders. Most fun I've had with my clothes on in quite some time. 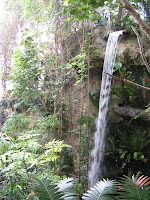 The Dallas World Aquarium (not to be confused with the  Dallas Children's Aquarium....well you can't have too many aquariums in one town) started life as a rubber warehouse, a steel manufacturer, a Venetian blind company to the old Tejano Rodeo Bar until renovated in the late 90's into the aquarium. A second building was built next door. The Aquarium exhibits are laid out into regions of the world and the main building houses the freshwater exhibits and the new building has the saltwater stuff. A third building was erected to house the Munda Maya Exhibit of the highlighting the species of the Mexico and Central America. 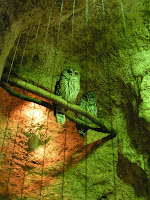 Now this is no Scripps Birch Aquarium or Monterey Bay Aquarium this baby is a straight up and down winding path of color and surprises around every bend covered from end to end by a huge skylight. It was a North Texas summer and although the interior was air conditioned, there was still a lot of humidity built up inside which was exacerbated by all the flora and fauna which, after all, was supposed to be a rain-forest. Engineering aside, the building and its exhibits are well done and engaging.

Dodging spectators blocking the path and mother's with twin baby carriages was daunting but worth the effort. A word about today's baby carriages, when did they become little Hummers on wheels. We came across a couple that looked like they had been designed by NASA with balloon tires, all kinds of little storage containers and even lights. I think one had built-in GPS and a raft for forging rivers. 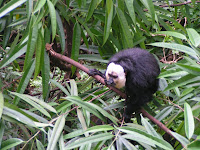 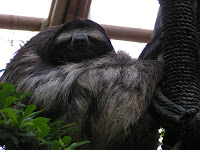 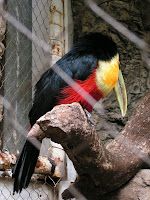 As we wound our way down the rim of the open rain forest, we came upon all kinds of brightly colored varmints and birds. There were the Tanagers, Pale-Faced Saki Monkey (obviously not a flavored Vodka guy), the Three-Toed Sloth (not to be confused with the Two-Toed variety we found downstream) and Giant Otters swimming around their tank (really hard to photograph when they are darting about). Apparently the Three-Toed Sloth has an aversion to flash photography but would rather be photographed in natural light. I wonder if he made the sign too. Probably not...no opposing thumbs, bummer. 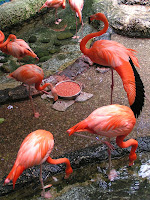 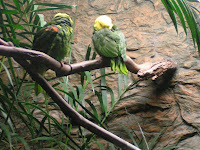 I got thrown briefly when I caught the "Double Yellow-Headed Amazon Parrot". My Dyslexia kicked in and I swore it said "Double Headed Parrot". My mistake but pretty none-the-less. There were Hawkheaded Parrots and Turtles galore. 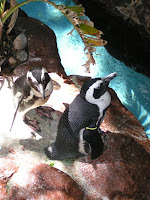 In the fish and aquatic department were several species of Penguins. In one of the outdoor exhibits stood a pair of Black Footed Penquins. Hey...does anybody check with the Penguins when they name them? These guys didn't seem very happy with their monikers besides....maybe they have a better name they call themselves. I mean those Empire and Tuxedo guys got cool names. I just think these guys need to be re-evaluated. 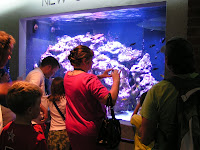 Then there were the "fish tanks on the wall" segment. Lots of cool colorful fish whizzing around tanks of poly-carbonate bliss with no predators to be had. The most interesting were the Flashlight Fish.

These folks are deep sea fish who travel primarily in dark spaces or in water so deep there is little sunlight that makes it there. They are known for their large bio-luminescent organs. These are located beneath the eyes and contain luminous bacteria. They turn them on and off by two methods, either a shutter-like lid is raised over the organ or the organ is turned downward into a pouch. The light is used for predator avoidance, to attract prey, and for communication. I think its where GM got the side marker light idea from.

The other cool thing is that the females are the larger and stronger of the species. In fact, when predators are around, they circle the wagons (that would be the males and kids)to protect them. I know all you feminists are out there slapping each other on the backs and high-fiving but anybody that's been in a relationship or married for any amount of time knows this to be true. 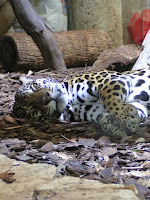 On the way out we got to go by the Jaguar. He just laid there, I'm sure contemplating each of us as a potential lunch ("That one..no that one....oh yeah that one....)

As I said,a little known but great tourist spot in downtown Dallas. Worth a second look when its a little cooler. I'm still trying to wring out my tee-shirt and undies.
Posted by Nick Saraceni at 8:13 PM