Our next port was Freeport.  Freeport was an up and coming region about the time the American Colonies were opening up. The British had enslaved all the inhabitants and had them harvest most of the trees on the Island. Most of the lumber used to build the first structures in Virginia most likely were brought from Freeport. The island is rather small and only about 93 miles long and 12 miles across but a classic Bahamian Island with white sand beaches and crystal clear green-blue waters. 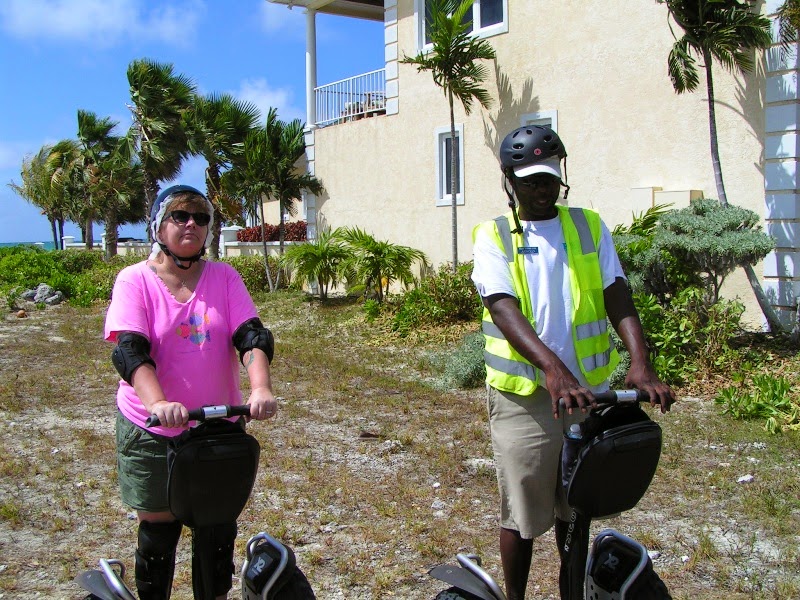 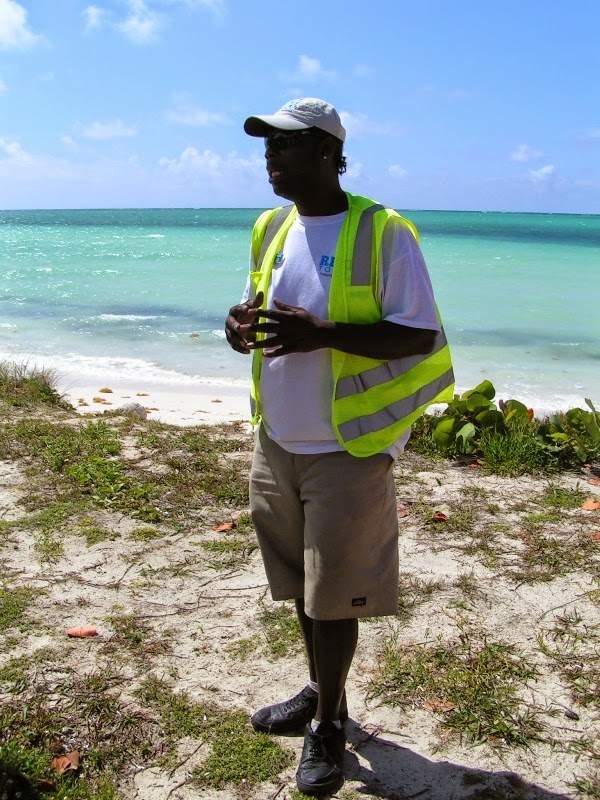 I had booked another Segway excursion for us. We had taken our first in Mexico and, as it turned out, were the “veteran” Segway drivers in the tour. Our guide was Arnold (AJ) and once you cut through the thick Bahamian accent, he was quite informative and funny. He took an immediate shine to Dianna. We were probably the oldest couple in the group (and I'm still struggling with that concept daily) and when he took her aside to give her instruction, he could see Dianna was a quick study and had retained her skills. He often drove in formation with her and chided her along with little quips about her driving skills. 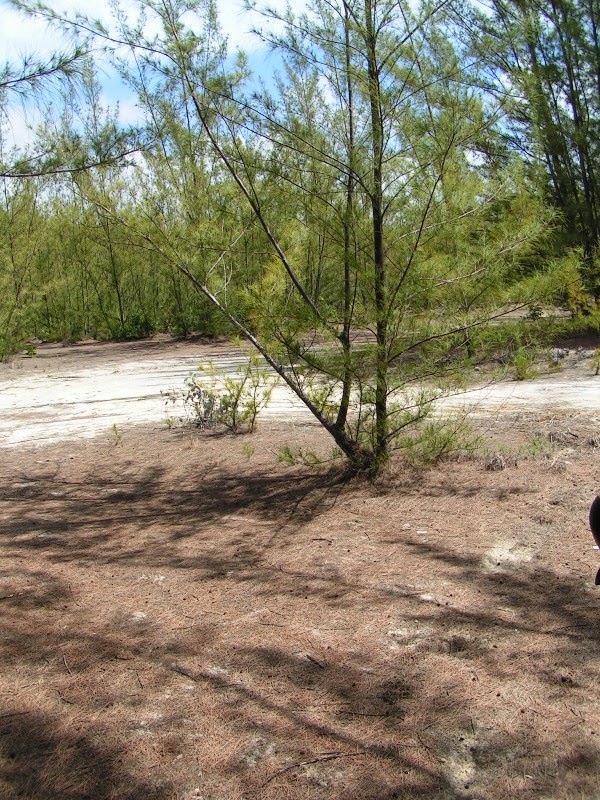 On one run, we drove through a grove of trees with thin trunks and wispy needled leaves. Arnold pointed them out and referred to them as Australian Pines. They were not indigenous to the Bahamas and were planted almost by accident by some Australian settlers in the late 1800's. A couple had been brought over to plant at their new home as a result of the deforesting of the Islands by the early settlers.  Begun as an experiment, they quickly thrived in the Bahamian soil and are now seen all over the Bahamas. What no one knew at the time was that Australian Pines thrive in salty, sandy earth. This becomes even more important when storm surges from weather or hurricanes flood the land. Freeport's highest point is only 33 feet above sea level. The trees, even when completely submerged just bounce back when the waters recede. 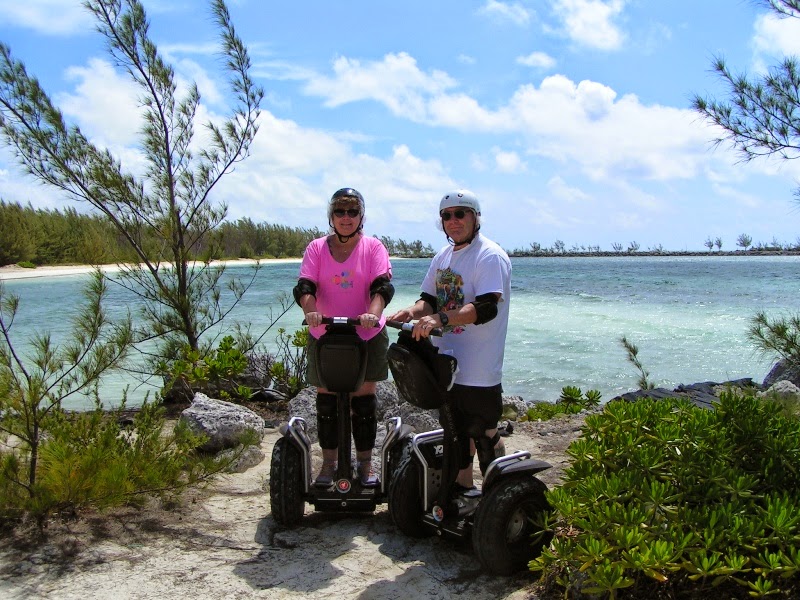 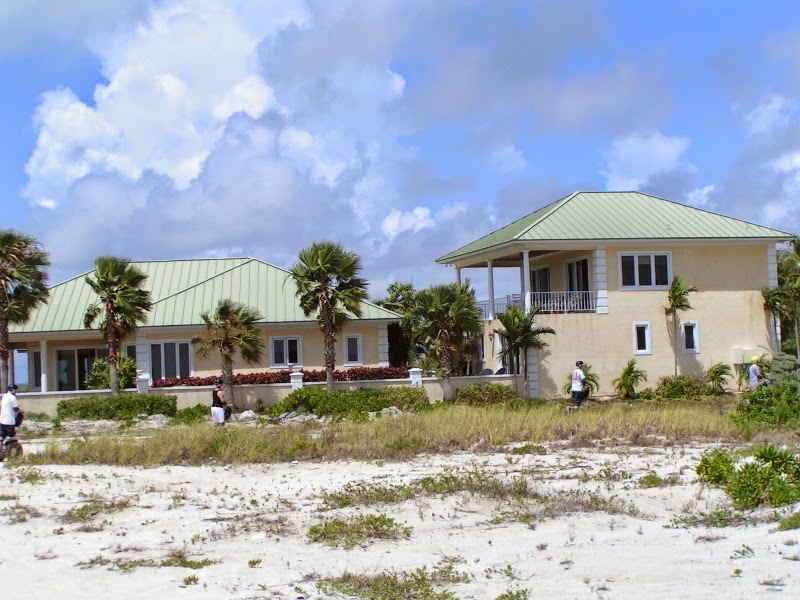 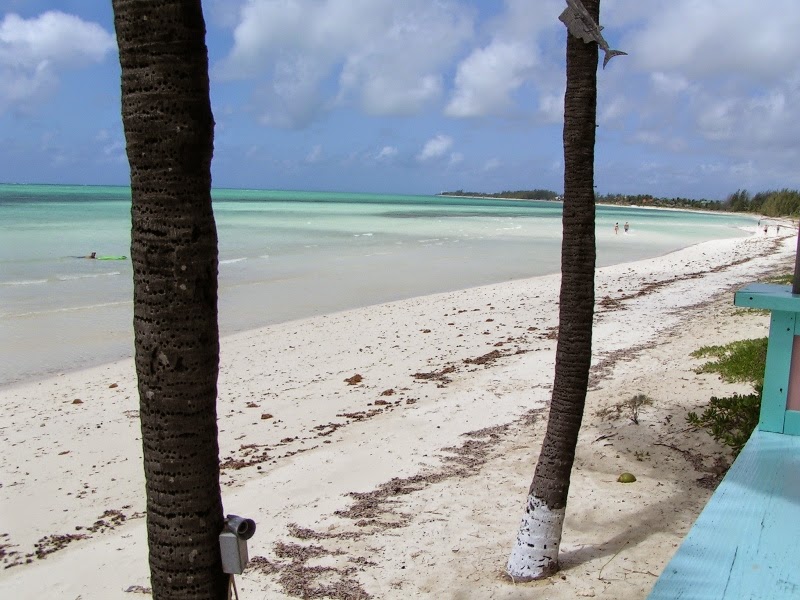 Arnold ran us down to the beach and gave us an opportunity to walk the pristine sands and was kind enough to take pictures of each of us. He pointed out a pretty home just up the beach we drove by that was a vacation home to Dan Merino. 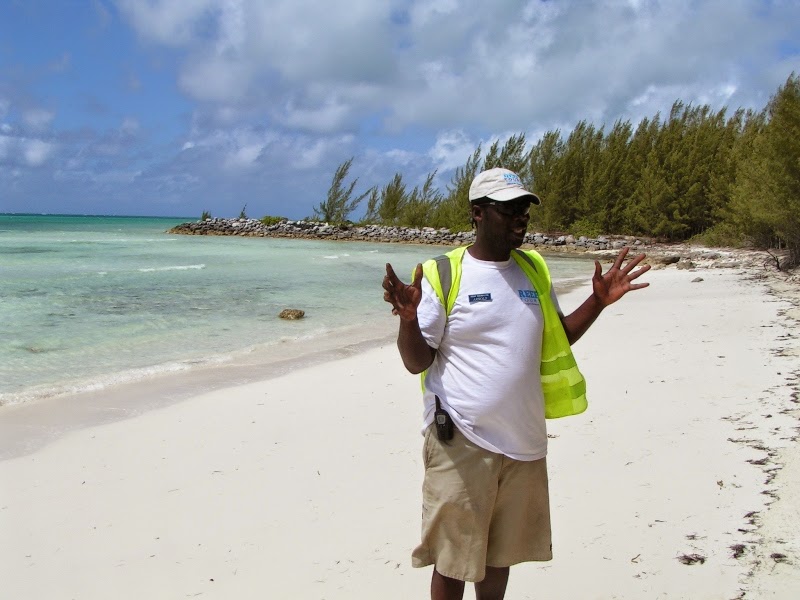 Arnold made it a point to give us the 411 on Conch Shell meat. Like Abalone, it was considered a delicacy but that wasn't all. He wanted us all to know about the benefits of eating Conch especially, it turns out, for the men. Arnold was a firm believer and advocate for eating copious amounts of Conch he euphemistically referred to as the Bahamian Viagra. 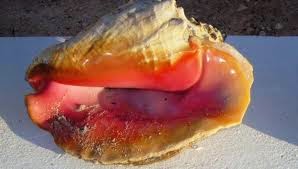 Like a snake-oil salesman he proclaimed Conch was strong enough to cure any degree of ED, right capsized ships or straighten the Tower of Pisa if taken as directed. Quite the advocate I must say.  At the end of our sojourn, as we disengaged ourselves from our safety equipment, he took Dianna aside and handed her a beautiful Conch shell she had been admiring, as a Mother's Day gift. 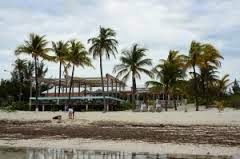 We were then walked over to a small beach restaurant to relax before the drive back to town. It was a nice mom and pop restaurant called Banana Bay and bar with a really nice Lanai open patio overlooking the beach  in a place called Fortune Bay. Both of us had the delicious Chunky Chicken Salad and some Ice Tea on the one of their picnic tables. 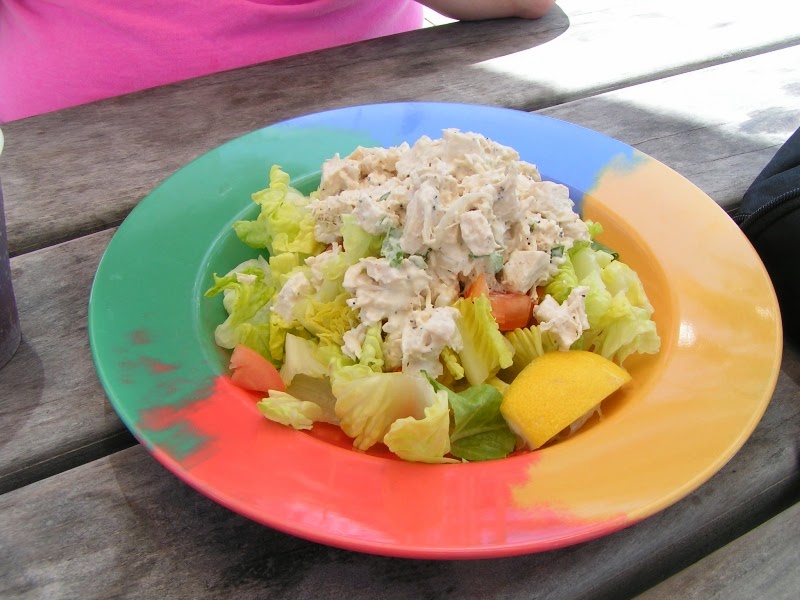 Fortune Bay is an example of the chaste system typical of our experience in the Caribbean. Only the wealthy, primarily white (many of whom are foreigners) reside in the exclusive communities. These were historically lands either seized by the early British rulers or areas set aside for the wealthy and government officials after independence. Most of the poorer natives work in the service or hospitality industry and live in more, how should we say.....modest homes and neighborhoods (think the Colonias in Mexico). Although the Government has made some improvements, there is much to be done and there is still a lot of graft and corruption for the people to endure. Two hurricanes in 2004 (say it with me Tonia...Frances and Jeanne) devastated the island and tourism has suffered ever since then.

A drive to the shopping mecca, Port Lucaya, and shopping. Nothing to write home about (wait a minute, that's what I'm doing) the usual suspects, the Diamond's International, Del Sols and the like but I had to try Arnold's Conch Meat challenge. A word about the name Port Lucaya. I should point out that the indigenous people of the Bahamas when the British landed were the Lucayans and the Arawaks. Unfortunately, you can't meet or interview one because, once the British arrived, they quickly enslaved the tribal people who either worked to death, were sent off to other places, died of disease or killed themselves rather than be abused by their masters. 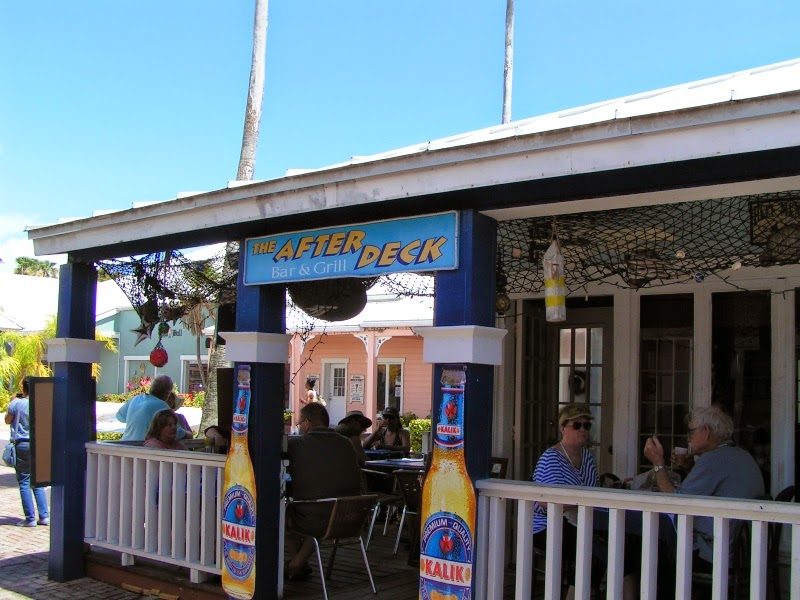 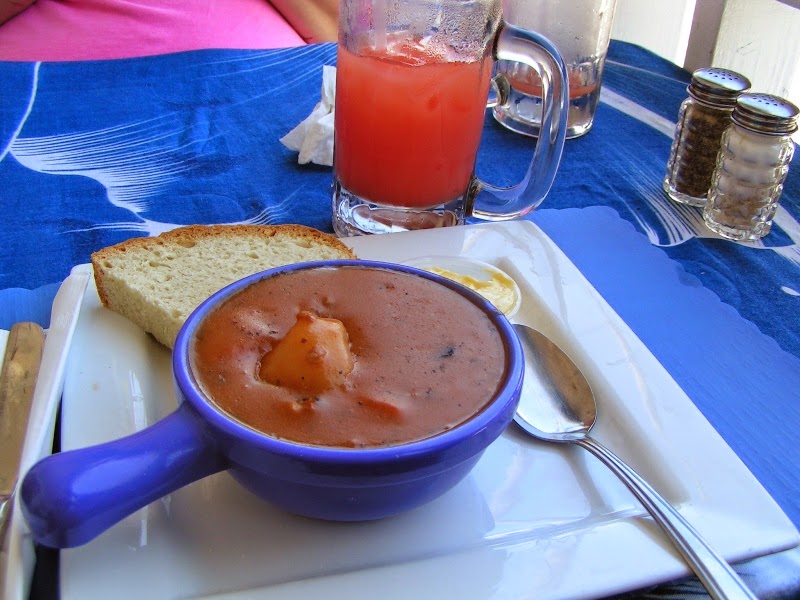 Not impressed by the shopping options, we stopped at the “After Deck” Bar and Grille and I ordered some Conch Chowder and a couple of Bahama Mama rum drinks. A really tasty, almost Chili-like concoction with bits (and I mean “bits”) of Conch meat mixed in. I highly recommend it. Not for it's magical powers but just a really good soup with some pieces of potato and carrots thrown in for good measure. Then it was back to the ship and off again to Nassau.
Posted by Nick Saraceni at 12:30 PM