Perot Museum of Nature and Science

My family is well aware of the fact I will go to any museum anywhere at the drop of a hat. So imagine my excitement when my son (probably wanting to stay in the will) got Dianna and I tickets to the new  Perot Museum of Nature and Science  in downtown Dallas. Now I say excitement but when Dianna was asked about her anticipation level, she clapped her hands together like one of those high society claps followed by a subdued "Yea!" then she quickly moved off to update her Facebook page. 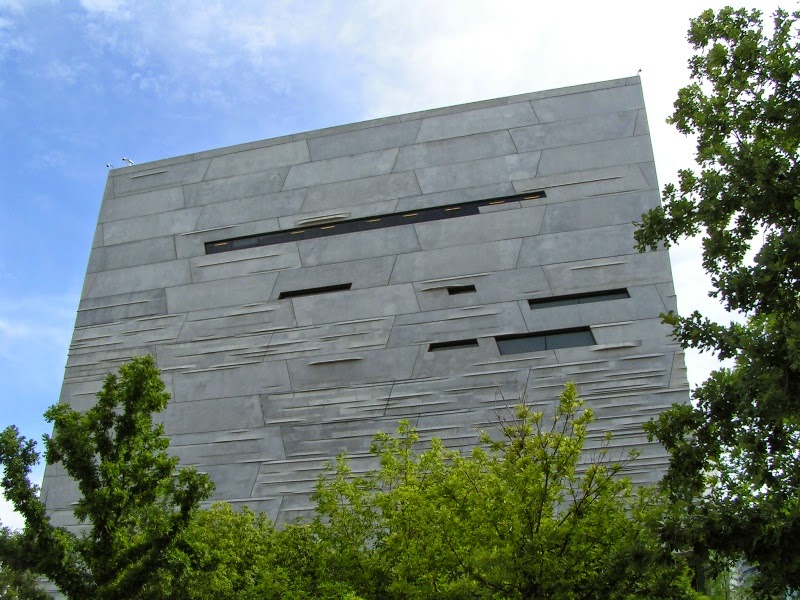 Now I should add (so I'm not killed in my sleep) Dianna has been a real trooper in that she has dutifully ridden shotgun on all of our excursions in which she has been forced to follow me into every roadside museum this side (well...and the other side) of the Mississippi. Slogging along in all kinds of weather to document each stop with Facebook updates and her Momentos app without complaint (usually).

The Perot Museum has only been open since December 2012 but has pretty much sold out everyday since. Thus the need to buy tickets online. When you do, you  have to select a date to attend and the Museum assigns you a time to be there.  This breaks up the numbers of people over the entire day so there is no build up of bodies in either the theaters or the museum halls to stop you from seeing the  whole museum in one visit.

The Museum is chock full of tactile exploration areas, discovery stations, workshops, demonstrations, lectures and symposia, field trips, labs, a teacher development center, after-school and summer classes, clubs, interactive media  and more. Online activities, interactive media and online education programs. They even take their show on the road to any venue you can schedule. Hey...you can even have a birthday party there ala Chuck-e-Cheese.

Shocking statistic....an alarming 79% of 12th graders in the U.S. are not proficient in science, and in a study by the California Department of Education and the American Institutes for Research, At Risk youth experienced a 27% increase in mastery of science skills after they participated in a nature education program. They also cooperated better, resolved conflict better and had better self-esteem than their peers who didn't participate in the program. So the Museums primary mission is not only to educate adults but to provide a kid-friendly environment to excite children about science and math and give local school districts the resources they need to improve this statistic and maintain a competitive edge in the world.

We also got tickets to the 3D theater so we began our visit there where we were to see a National Geographic documentary on the life of Monarch Butteflies. Luckily for us there had been a schedule mix-up and our assigned time turned out to be the Dinosaur Documentary. Technology in 3D has really matured and watching all those Dinosaurs come to life was very cool. Best part was we were invited back to the next show to see the Butterfly Documentary. A two-fer! 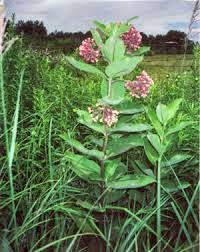 Turns out the Monarch Butterfly journey begins right here in the Hill Country of Texas with Monarch moms laying eggs on our Milkweed that grows all over. The Milkweed they feed on as a caterpillar is actually a poisonous toxin and is stored in their bodies. This is what makes the Monarch Butterfly taste so terrible to predators. So it's perfect for Monarchs in that they can lay there eggs where they won't be disturbed and provide a ready supply of food for the young hatchlings. They continue to eat there way to adulthood where they turn from caterpillar to beautiful butterfly.

Monarchs can produce four generations during one summer. The first three generations will have life spans from 2 - 6 weeks and will continue moving north. During this time they will mate and have the next generation that will continue the northward migration. The fourth generation is different and can live up to nine months. These are the butterflies that will migrate south for winter from Canada to either Mexico or Southern California.
The documentary followed four generations through their travels and ultimate migration back to a special place in the Mexican Sierra Madre Mountains where the millions of the Butterflies go every year to spend the winter and hibernate. The amazing thing is, although the butterflies have never been there, they are able to navigate there way to this one patch of Mexico. It's still a mystery as to how they do it but because they are endangered, the Mexican government created the Monarch Butterfly Biosphere Reserve which protects the 217 square miles of forests in the Sierra Madres where millions of Monarchs spend each winter. They hang in clusters in the trees of the forest like moss wriggling as the gusts of wind pass through their wings until they suddenly burst forth in middle March with the change from Winter to Spring and they begin their migration back north to find Milkweed, mate and to lay eggs to start the whole process again. 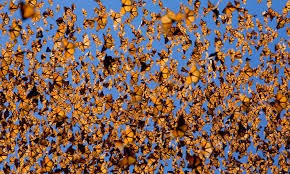 The 3D effect had them swarming and swirling seemingly right in front of us as though you could reach out and touch them as some of the younger members of the audience tried to do.They filled the screen and sky blanketing the scene in every direction with their bright colors like confetti swirling in the air.So make sure you plant a Monarch Butterfly Waystation by using specific plants and raised flowerbeds to give the little guys a safe place to hang out and recharge  .

The Perot Museum building alone is an exhibit on it's own.   The massive blockhouse-like structure is 180,000 square feet. The building’s outer skin is made up of 656 textured precast concrete panels (which include recycled and locally sourced materials), totaling 4 million pounds. 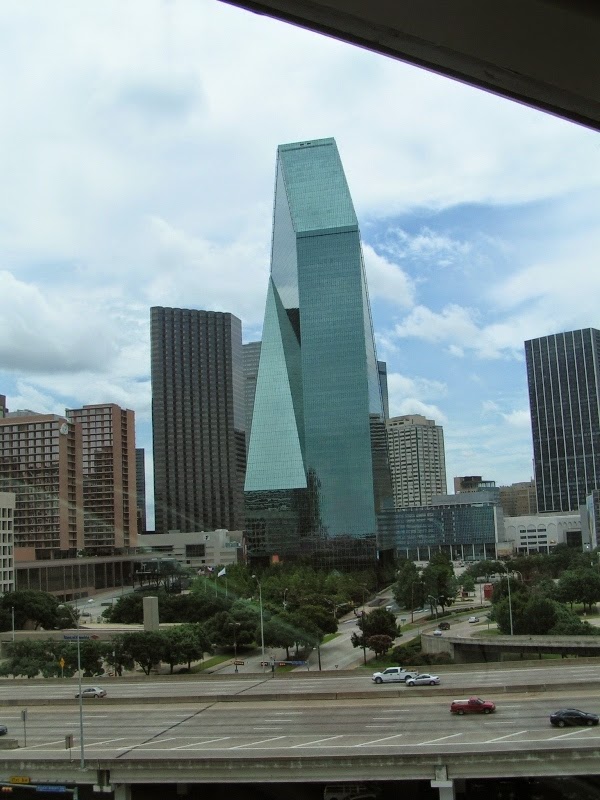 It also has as a 54-foot continuous-flow escalator contained in a 150-foot glass-enclosed tube-like structure on it's outer wall which provides a breathtaking view of downtown Dallas. The escalator looks more like somebody forgot to put the last bolt on and it fell over in the wind.
The building’s plinth roof is home to drought-tolerant plants that are native to Texas. They even recycle the air conditioning condensation to use it for water and irrigation.The buildings water is heated by Solar panels on the plinth while the building’s interior is lit by LEDs and natural sunlight, including skylights for street-level rooms.

Although the exhibitions change periodically, there are permanent displays including the history of energy drilling/fracking in Texas, extreme weather, engineering developments of Texas Corporations and a the physiology and physics of Sports.Let's not forget that Mr. Perot and many of the big-money contributors of the museum made their wealth in oil, gas and electronics.There's also a pretty cool collection of Dinosaurs and particularly those native to Paleo-Texas.The most entertaining for me was the Rees-Jones Foundation Dynamic Earth Hall. There, among the many geological and weather related exhibits, was a shake table.

It was actually billed as the "Earthquake Shake Immersive Experience" in the Land Dynamics section and was an attempt (no matter how lame) to simulate three different levels of magnitude of earthquake. The uninformed would stand on the shake table, select a magnitude and begin to sway back and forth to experience this obviously terrifying event. Dianna and I witnessed one of these when a Texas Mom corralled her son and husband onto the exhibit. She was clearly in awe of the opportunity to engage in this brush with death. 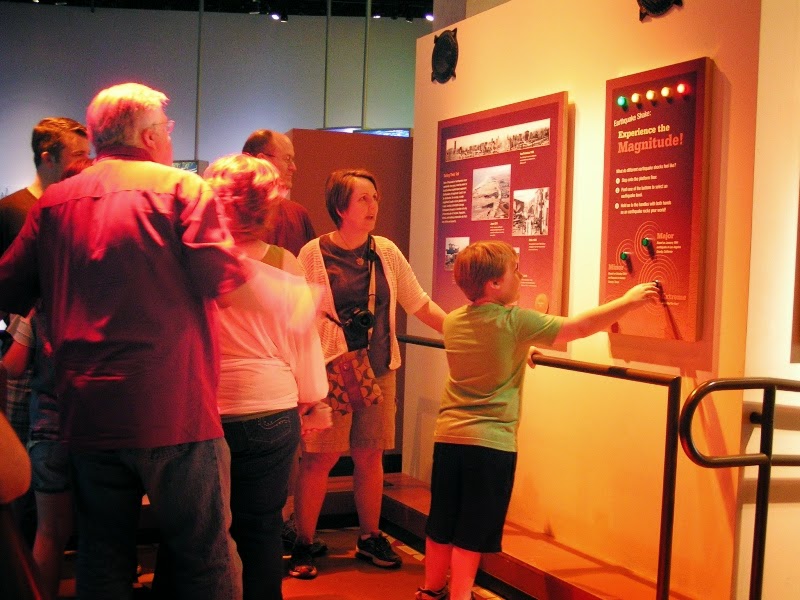 Once on-board, she quickly latched onto both of the handrails provided (handrails....really?), instructed her son (he must have been the expendable one) to push the first (and lowest) magnitude and away they went with Mom holding on for dear life as this platform moved ever so gently from side to side. The boy then began pushing each succeeding magnitude to "Danger, Will Robinson!" mode. I could see Mom spread her feet farther apart and squeeze the rail tighter as she exclaimed over and over, "Oh God, Oh God, whoaaaaaa!" calling to those aboard to "Hang on!" as though they might succumb to the wild gyrations beneath their feet.

Let me digress to describe the actual movement I observed. Ever get into a porch swing and just push back and forth using your toe? I'm not talking a high arcing swing....that one just before you jump off onto the hard pack dirt we remember as kids...forget the whole rubber chip molly-coddling playgrounds of today..no, sir. And each progressive "magnitude" just increased the frequency to a point where you could have sloshed your Slurpy if you hadn't thought of it. When they were done, Mom looked like she had been through the movie "Earthquake" (1974, Charleston Heston) as the exhibit stopped, she pried her hands off the rail and gingerly stepped off the platform onto Terra Firma. I actually thought she might kneel down and kiss the earth (or actually the floor). Californians (and most Haitians) would have been incensed by her display. Amateurs!

After taking in the Perot, specifically navigating all five floors and dodging untold numbers of children and strollers, we were ready for lunch. Luckily, just down the street was an El Fenix Mexican Restaurant .

Miguel Martinez was an emigré from Mexico in 1910 to avoid the Mexican Revolution. Miguel meets and marries fellow emigré Faustina Porras in 1915. They have eight kids. Miguel opens a small eating place called the "Martinez Café" in 1916. In the next two years Miguel serves mostly American style foods but begins to incorporate Mexican elements and "Tex-Mex" is born in 1918 and Miguel reopens his new restaurant calling it "El Fenix" newly reborn just like the Greek bird.

Miguel wasn't the best business man...as an example, tortilla making was a labor-intensive job and would yield inconsistent product. Miguel built a machine that would do the work and consistently make those yummy little disks to butter up. Miguel sold his tortilla machine to a guy named Herman Lay for $200.00. Miguel thought he had been the winner in that deal; but little did he know that Herman Lay would later go on to create Frito-Lay. Ok....a missed opportunity.

In 1925, he bought the corner grocery store at  1601 McKinney Ave. and in 1930 expands into the building next door and adds a ballroom on the second floor which became a well-known nightspot for many years. In the thirties, many big bands like Glenn Miller, Gene Kruppa and Kay Kaiser came to play. In 1946, Miguel retires back to his home-town in Mexico and leaves the operation to his children to run. Since that time, they have franchised and further expanded their restaurants to 20 after 96 years in business.

Of course, we were in the flagship original restaurant in Dallas a short walk east of the Perot Museum. The menu is extensive and the Margaritas were flowing. It was late afternoon but it didn't look like the lunch-time crowd had left. After imbibing in two bowls full of chips and what seemed like a gallon of their signature salsa (well...I had to overcome the effects of the fish-bowl Margarita they gave us), I had the Pan Seared fish tacos and Dianna had the Cheese Enchiladas. For dessert we had the Chocolate Caramel Sopapilla. Awesome.

After walking our feet off at the museum, consuming some of the best Mexican food (well..and Margaritas)I've had since California (and concerned what I might blow in a  GCI  if we had stayed), we made our way up the Dallas North Tollway safely home.

Posted by Nick Saraceni at 7:06 PM