Fort Worth Science and History Museum 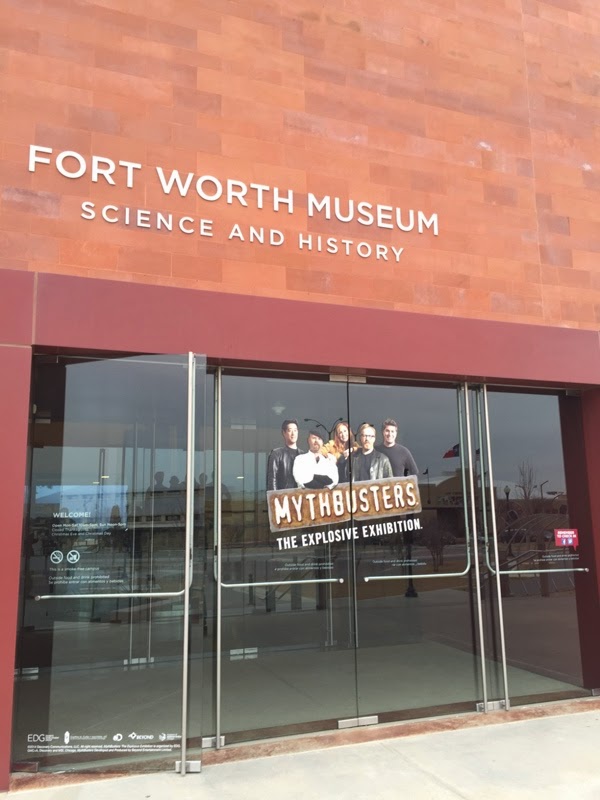 I was somewhat surprised when my son William approached me about heading to Fort Worth and visiting the Fort Worth Museum of Science and History. He has an abiding interest in all things space and especially dealing with the stars and flotsam that make up our vast Universe. He spends hours watching (and got me hooked too) the new Cosmos Series by Dr. Neil deGrasse Tyson.

So imagine my surprise when he asked me to go. My response was.....listen, I will go to any museum, historical monument, point of interest, heck...any worn bronze plaque at the drop of a hat. Of course, I said yes.

Thus, we found ourselves wending our way westbound to the City of Fort Worth, Texas, their slogan, "Where the West begins". My GPS, Patty, got us there without incident on a frigid 30 degree workday. After parking, we entered to find every little kid and Soccer Mom in the Fort Worth area present in the Museum. It was Winter (yes...formally known as, no longer politically-correct, Christmas-) Break and Moms were doing something to keep the kiddos occupied. So among the screams and cries of all those inquisitive minds, we drew out our trusty map and headed in. 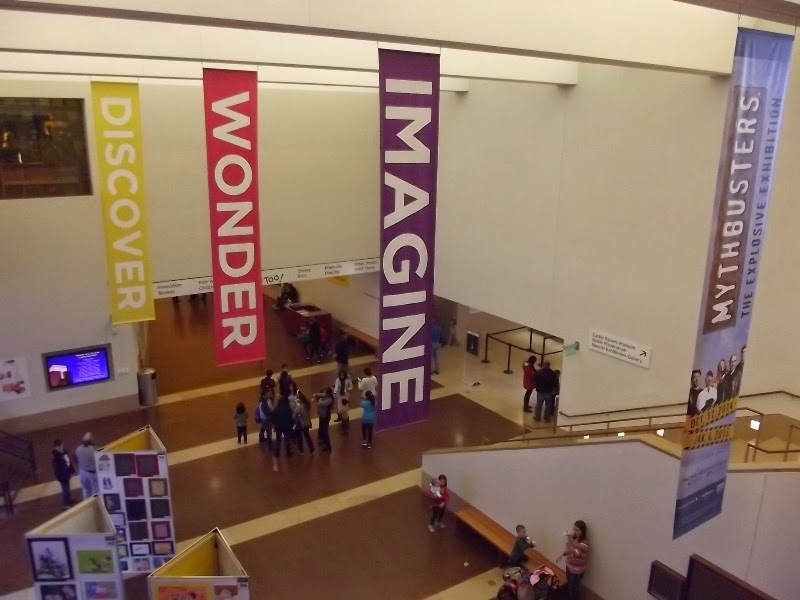 The museum's history actually began in 1939 when the local council of Administrative Women in Education began a study of children's museums, with the idea of starting one in Fort Worth. Two years later the charter was filed, but it would be almost four years before the museum would find a physical home. With the help of the city's school board, a charter to establish a Fort Worth Children's Museum was filed with the State of Texas.

The purposes of the new museum were listed as: "The maintenance of a place where geological, biological, and zoological collections may be housed; to increase and diffuse a knowledge and appreciation of history, art, and science; to preserve objects of historic, artistic, and scientific interests; and to offer popular instruction and opportunities for esthetic enjoyment." The museum opened in early 1945 in two rooms in a local Elementary School.

By 1947, it became apparent that a much larger facility was needed to serve the growing needs of the community. Ground was broken for a new facility in 1952. On January 25, 1954, the museum opened the building at 1501 Montgomery Street. The following year the Noble Planetarium, the first public planetarium in the region, opened. In 1968, the name was changed to the Fort Worth Museum of Science and History to draw in adults. In 2009 it reopened in a newly constructed building and continues to be one of the most successful in the world.

The Museum....like the brochure says, is mostly made for kids. It was a holiday and they were clearly catering to the kids who were there. But we did get to see some pretty cool adult stuff too. 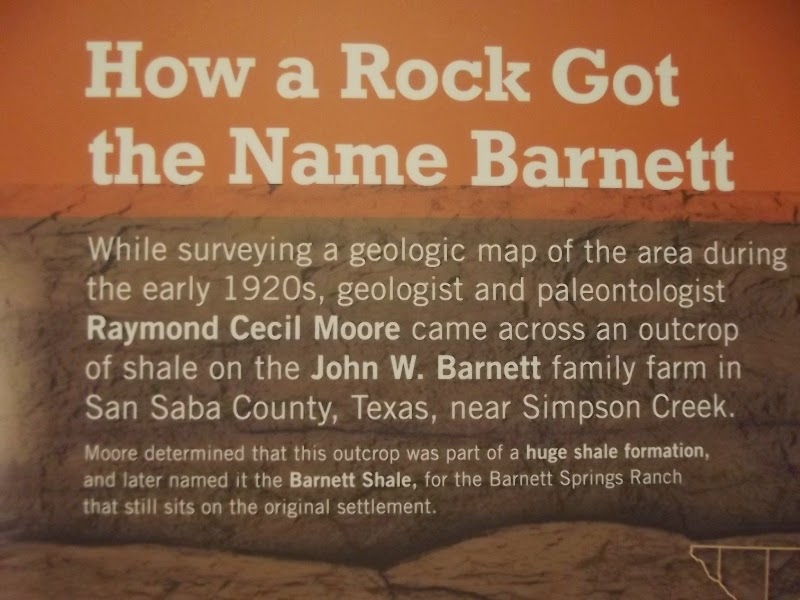 There were the usual oil and gas exhibits typical of any Texas Science Museum. After all, we were standing on top of one of the largest deposits of oil and gas trapped in one of the largest such reserves in the world, the Barnett Shale. Then, there were the energy exhibits touting the oil and gas industry's (oh yeah....they were museum benefactors too) benevolence in providing us with that energy and jobs that supply the entire region and how it was adding to Texas' greatness as an energy giant here and around the world...Blah, Blah, Blah. Yeah....you've probably seen the commercials to make us feel like they care about our plight with the added subliminal message they can jack up the price, dry up jobs or the supply if we don't conform. 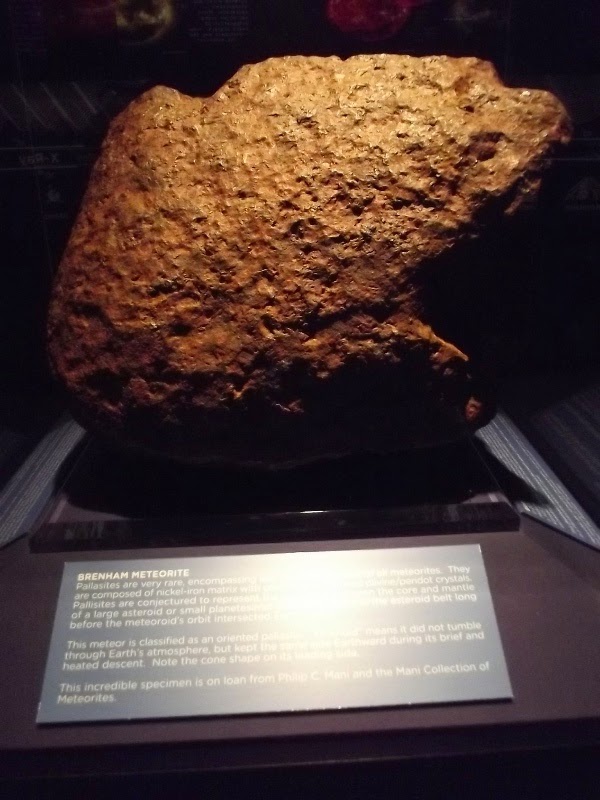 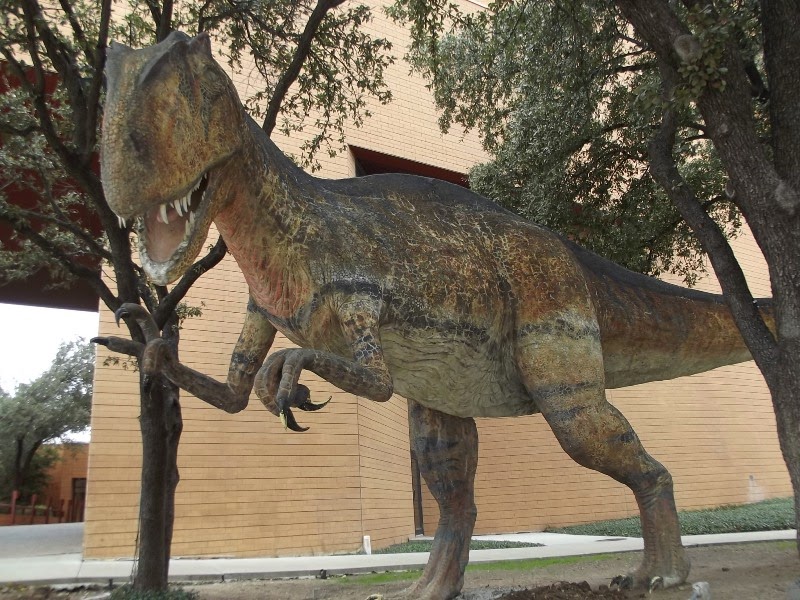 There were the usual exhibits for rocks and dinosaurs but one kind of stuck out. The Cattle Raisers Museum. Not sure how raising cattle meets the criteria for a Science Museum but....I'll roll with it.

In 1979, the Texas and Southwestern Cattle Raisers Association members formed the Texas and Southwestern Cattle Raisers Foundation.  They wanted to preserve and protect the heritage of the livestock industry of the Southwest, the Foundation's wanted to educate students and the general public as to the ways of the cattle industry. The Cattle Raisers Museum officially opened in 1980 and in November, 2009, the Museum relocated and re-opened within the Fort Worth Museum of Science and History which just happens to be right next door to the Will Rogers Memorial Center, home of the ginormous Fort Worth Stock Show and Rodeo. 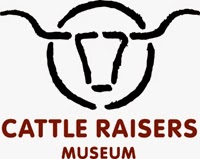 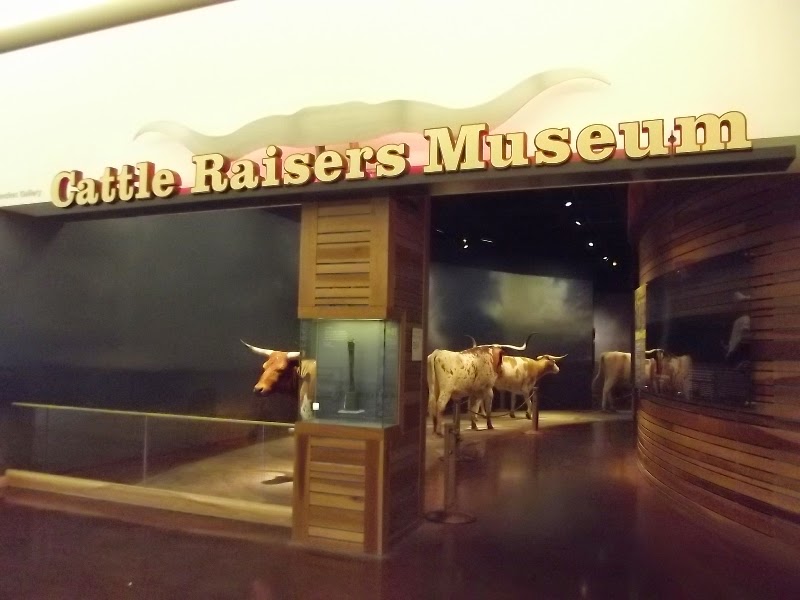 Ok...a little branding lesson. The Longhorn head formed by the facing numbers 7 and 7 resting on a bar signify the founding of Texas and Southwestern Cattle Raisers Association in 1877. The three parts of the continuous circle represent the independence, courage and commitment of generations of ranching families who built the industry. The horns extending outside the circle symbolize a vision with no boundaries or limitations. Ok...very existential for Cowboy stuff. 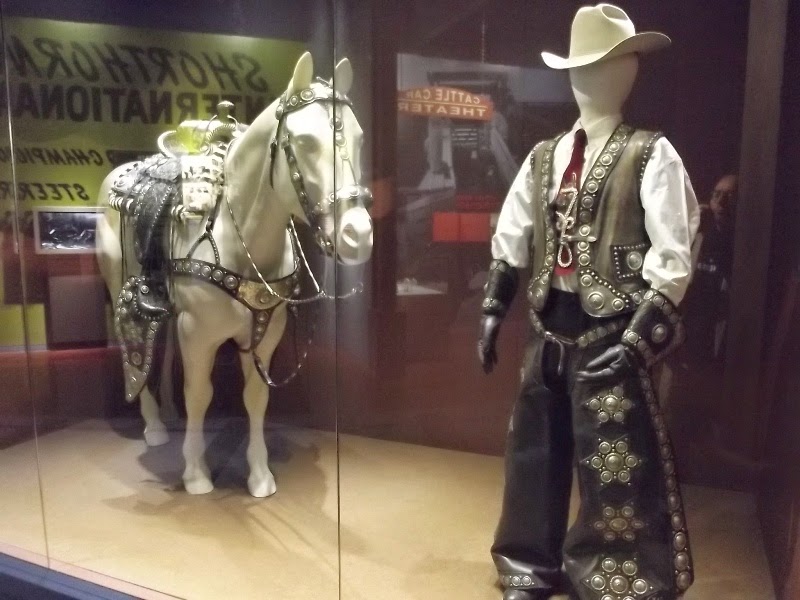 It was actually kind of cool to see all the riding tack, the different trails and the famous cattle drovers like Charles Goodnight of Lonesome Dove fame. Ok...little trivia. Most folks know about Blue Bell Ice Cream made right here in Brenham, Texas. Well the name Blue Bell derives from the lead steer of Goodnight's JA Ranch herd. His name was "Old Blue" and led many of the cattle drives from Fort Worth to Dodge City Kansas. Blue was so good and knew the trail so well,it was said he knew the trail better than the cowboys who ran the herds. He is remembered by the Museum by displaying his Bell. And now you know. 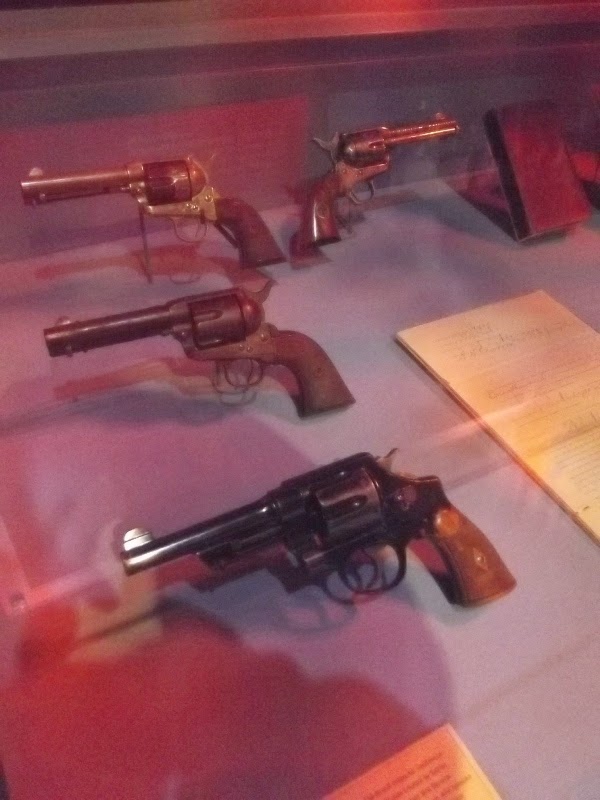 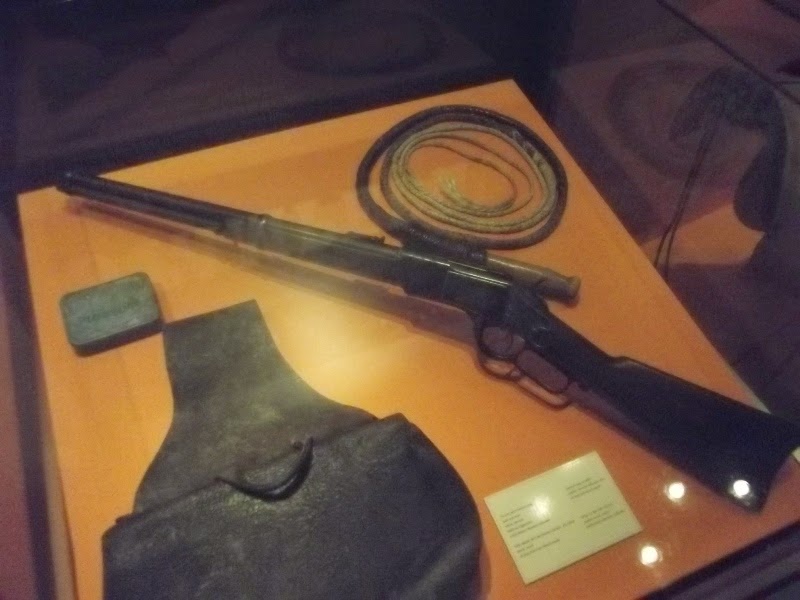 The exhibits take you through the history of raising and driving cattle to market. From the early days of the cattle drive to the current railroad and truck methods of moving cattle to market. there's a staggering collection of ornate saddles, spurs, barbed wire and, of course...the guns. Some of the finest examples of rifles and six-shooters you'll ever see. 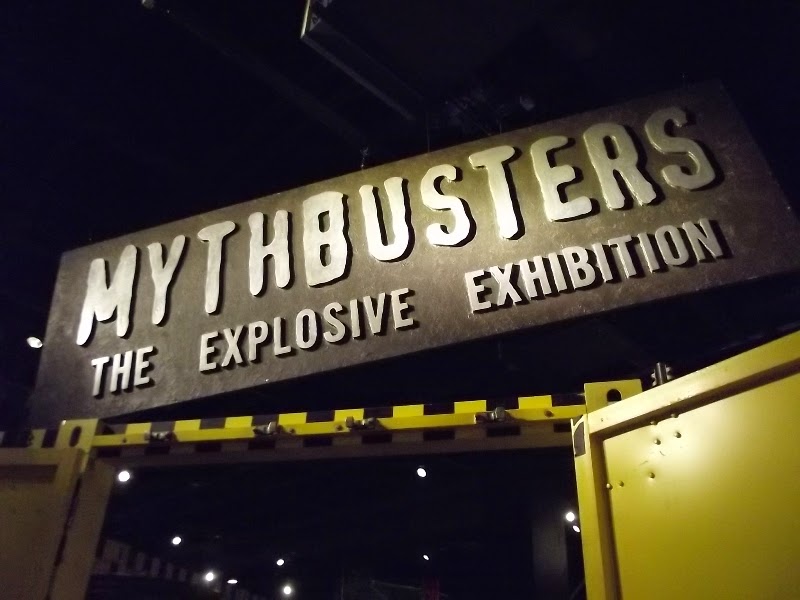 In the Special Exhibit Department we had, "Myth Busters, the Explosive Exhibition". Apparently, the team has franchised their show to museums that involve interactive science exhibits mimicking some of the Myths they did on the cable show. It was fun running through rain drops, hanging by your finger tips and swatting buttered toast to see if it would land on the heavier butter side or the dry side (mine was buttered side up). One experiment William and I tried was to see if you could pull the table cloth from under some dinnerware, like the magic trick. Both Bill and I successfully did so. I didn't know I had it in me. 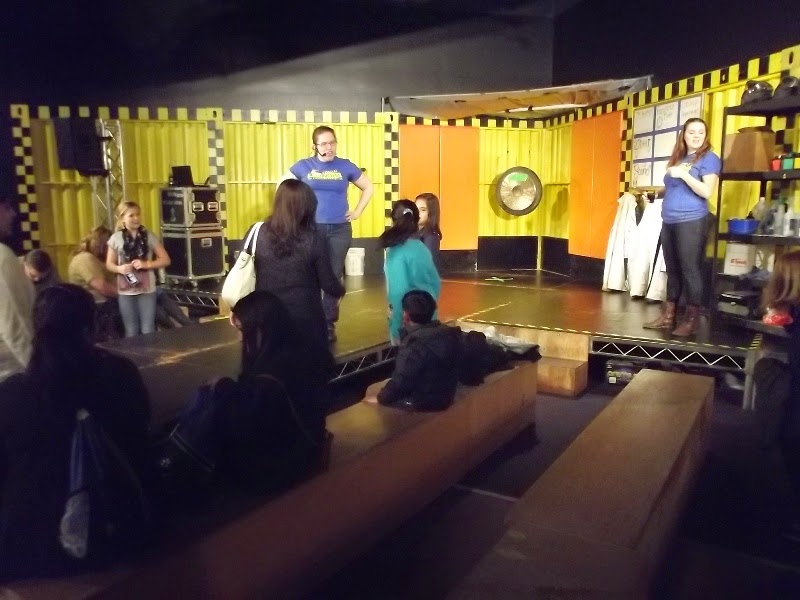 There was even a live demonstration in whether you can "dodge a bullet". In this case they got volunteers to make predictions as to whether you could dodge a bullet (in this case a paint ball) and whether it would be faster if it was a sound que or a light que. As it turns out our hosts, Augusta and Julia convinced us (and apparently backed up by scientific testing) that a sound que works better than lights. Seems light takes us longer to process than sound in reactions times. Who knew? 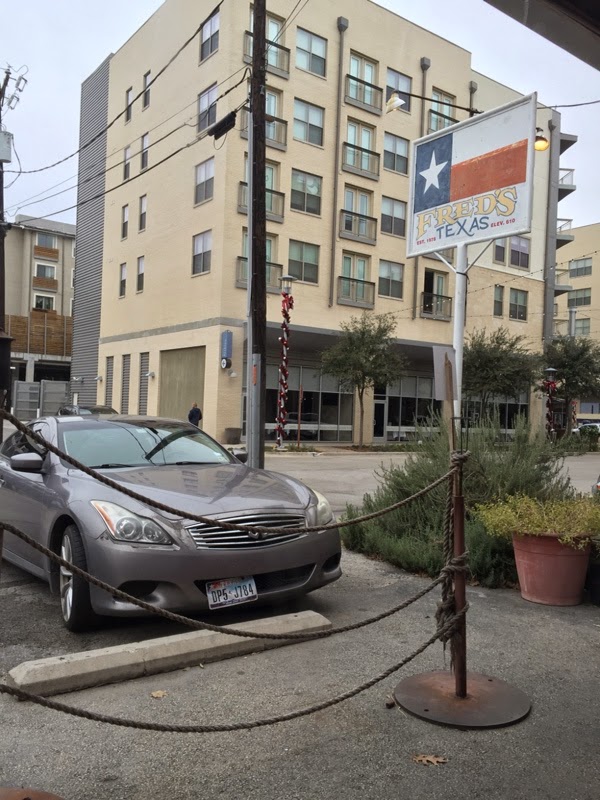 We had a little time to wait for our Planetarium show so we decided to leave and get something to eat. I tried my new iPhone and asked Siri who led us to a hamburger joint close by. We were fortunate enough to be close to Fred's Original Texas Cafe on Currie Street. Founded in 1978 by Chef Terry Chandler, in a really homy old single story building in what is now the Fort Worth Art District. But it looks really out-of-place.  I would venture to say the neighborhood may have been the victim of urban renewal in that it is now dwarfed by modern apartment and multi-story parking structures. 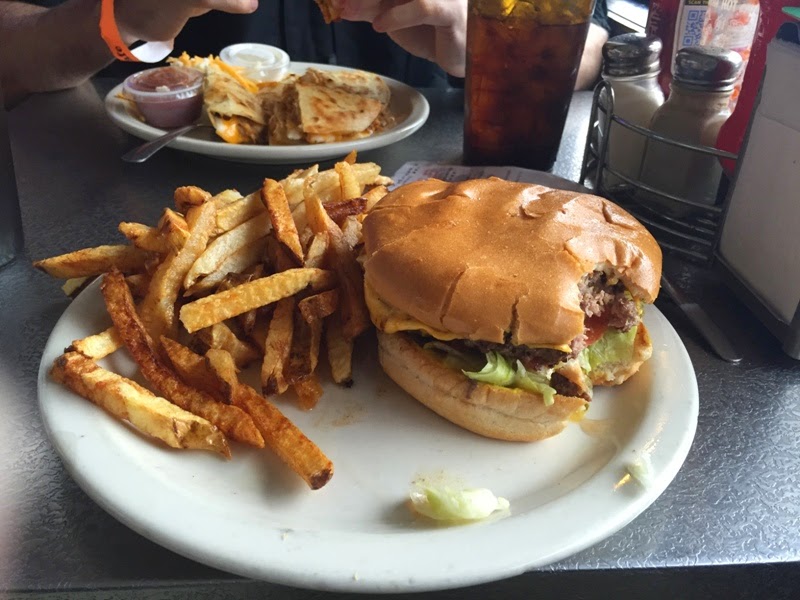 But we were there for food and I ordered the Fred Burger with cheese and all the fixin's. Bill got the (sigh) Chicken Quesadilla (with all due respect...who goes to a greasy spoon hamburger place to order a quesadilla?). Both looked good and I must say my burger was one of the best I've ever had. A three-quarter pounder nestled between bun halves, the top bun gently butter brushed, it's top glaze sparkling from the combined lights of the beer signs all around us. 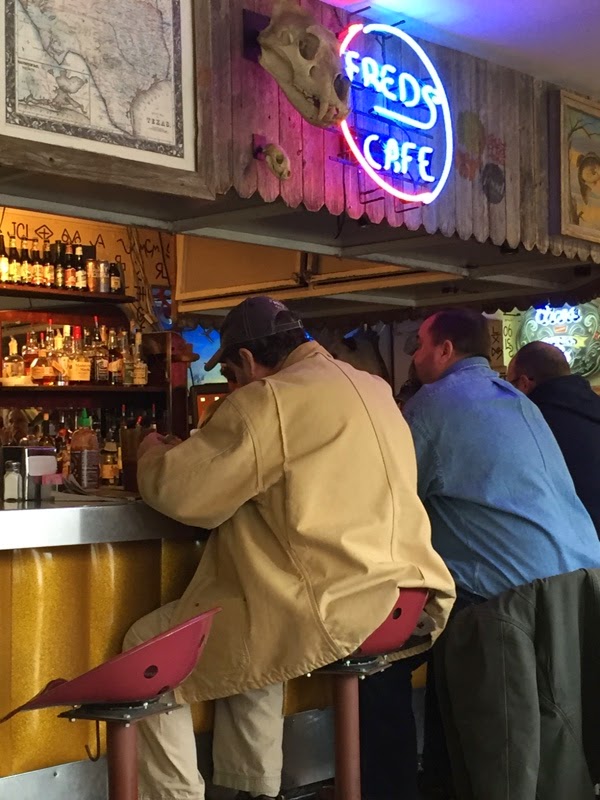 Well...you know....you can always tell the quality of a burger when you bite into it and are rewarded by that little puddle of yellow grease forming below on your plate. Not a steady flow but the gentle drip, drip, drip of exquisitely rendered fat which will probably require the remnants of a crispy fry to sop it up with.  Yeah...you know what I'm talking about. Quite delicious. Oh yeah, Bill said he thought his quesadilla was ok too. If you're ever in the area....check Fred's out. 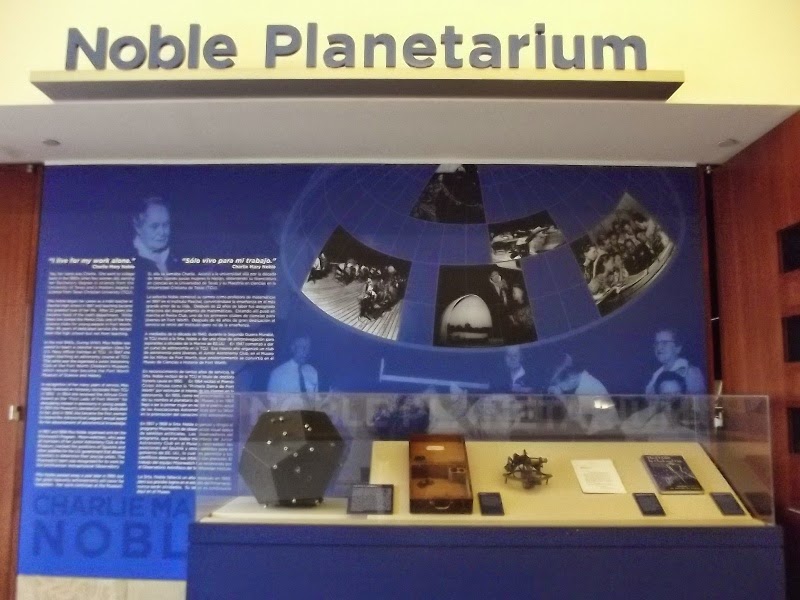 Back to the museum and our rendezvous with the Planetarium. The Noble Planetarium is named after Ms. Charlie Mary Noble. Yep...a rather famous local woman. She went to college back in the 1890s when few women did, earning her Bachelors degree in Science from the University of Texas (Go Longhorns) and a Masters degree in Science from Texas Christian University (TCU) (Go Horned Frogs). She loved math and became a teacher in 1897 in a Fort Worth high school. During her 46 years as a teacher, she started the first children's science club because of her interest in Astronomy.

She was so good, in the mid 1940s, during WWII, Miss Noble was asked to teach a celestial navigation class for U.S. Navy officer trainees at TCU.  In 1947 she began teaching an astronomy course at TCU. That same year she organized a Junior Astronomy Club at the Fort Worth Children's Museum, which would later become the Fort Worth Museum of Science and History.

In 1955 the Museum's Planetarium was dedicated to her, being the first planetarium in the entire world named for a woman.  In 1956 she became the first woman to receive the Astronomical League's annual award for her advancement of astronomical knowledge. In 1957 and 1958 Miss Noble organized and ran the Moonwatch Program.  Moon-watchers, who were all members of her Junior Astronomy Club at the Museum, tracked the positions of Sputnik and other satellites for the U.S. government that allowed scientists to determine their precise orbits. She passed away in 1959 but is remembered through the programs at the Planetarium that bears her name.

The program we watched was, "Back to the Moon for good". It gave a brief history of our efforts to get to the moon and our failure to capitalize on that achievement. Little piece of trivia, the last mission to the moon returned two months after I graduated High School in 1972 (yes...40 years ago). It went on to present new efforts spurred on by the  Google Lunar XPrize. In essence, it requires teams to launch a spacecraft, orbit the moon, land a lander and either that vehicle or an autonomous rover then must traverse 500 meters transmitting pictures back to Earth while doing so by December 31st, 2015 to win the 20 million dollar 1st prize or a 5 million Dollar second prize.  There are 18 teams signed up and the clock is ticking.

A wonderful program viewed on their 40 foot dome screen. We had a great time and some pretty good bonding time to boot. Looking forward to the next such outing.
Posted by Nick Saraceni at 10:55 PM