After two more days at sea, we get to Sint (really, not spelled incorrectly) Maarten. Ok…it turns out it’s the Dutch for St. Martin of Tours (not to be confused with St. Martin de Porres patron saint of Mixed Race people (who knew they had a special category), Barbers (you can’t make this stuff up), Public Health workers and Innkeepers (I really have to look into the connections there).

The island was originally “discovered” by Columbus on his second voyage (as we all know, the Arawak people had been there since around 400 AD). He kind of did a “drive-by” in that he never actually set foot there, just claimed it for Spain in 1493 on the fly on Saint Martin’s Day. Ya gotta know being a famous explorer and all, he was a pretty busy guy with lots of responsibilities arbitrarily “discovering” and naming places where other people have lived for millennia. Ya just don’t have the time to get your officious butt onto the beach.  I’m sure he put it on his calendar to return to someday.

According to Catholic Online (who knew?), Martin was born in 315 AD in Pannonia, Hungary under Roman rule, Martin was an early adopter of Catholicism when he was about 10 when the Roman’s still considered it “the church of what’s happening now”. He was forced into military service at 15 but still celebrated his Christianity in secret. He became an officer and while assigned to France, showed his Christian values by cutting off half his officer’s cloak in two with his sword and handing half to a freezing beggar he passed when he was 18. Unheard of behavior for a Roman soldier. This crystalized his faith and from that moment on he became a conscientious objector and was briefly imprisoned for his cowardice but was released from prison and eventually the army. He became an early Bishop and was made the Bishop of Tours, (Centre-Val de Loire region) France (well…back then, Gaul). He died at 80 around 395 AD and they celebrate him on November 11th when Columbus drove by St. Martin island in 1493. 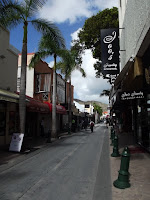 By 1624, the French had established a colony to grow tobacco in the north and in 1631 the Dutch came in to produce salt in the south. They have squabbled over the island ever since and even the British came in for a time to muddy up the waters as well. By 1816 the British moved out and the island was split again with French St. Martin (note the spelling) gaining independence in 2007 and the Dutch in 2010.

So we arrive to find the temperature a sizzling 86 heading for 90 with 80% humidity. Our tour wasn’t until 1 pm so we decided to get out early and check the shopping on Front Street. Typical Caribbean digs, lots of high priced shops with the same names, Diamonds International, Del Sol, hey there’s was even a McDonalds just down from the port entrance. We made our way around and after some minor purchases (Dianna insisted on getting a little bottle of Mercurochrome….ya got me) our first meal on St. Maarten was….an Italian Sub at Subway. Ok…you can stop laughing now. 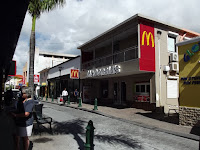 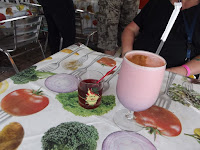 We putted around until our drive around the island tour began. Luckily the bus was air conditioned. Lord it was hot. The “See and Sea Island tour” was nothing to write home about (wait a minute....that’s what I’m doing now) but did have some interesting points. The most interesting was on the French side of the island. We stopped for a shopping/eating stop in the French Capitol, Marigot. There we decided to try the national drink, a Guava berry Rum drink. It has Guava berry (grown locally), Coconut milk and local rum. At a little café called "Chez Coco" we tried the straight Guava Berry and rum first, though tasty, a bit harsh but the frozen Colada mix was really great and refreshing. I recommend it highly. Is anybody else noticing a trend in our vacation observations? 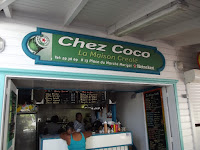 Some interesting factoids were that (surprise) St. Martin’s one and only industry is tourism and everyone is somehow involved in that industry. We had arrived in their low season (hurricane season) and they were heading into high season December to June. The other was, contrary to Bermudas edicts, there are more cars than people (about 74,000) on the island and we got a taste of that on St. Martins windy roads. Our tour guide pointed out that there were several homes on St. Martin that had gold stars displayed on their exterior. A custom in the Caribbean, she said this denoted a home that was over 150 years old. 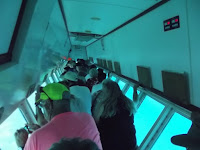 The tour included a short glass bottom boat run over the coral reef off Grand Case (pronounced Cass). Pretty cool in that one of the crew (Jack) hopped off and swam around the boat feeding the fish which swarmed around him so everybody got a great Kodak moment. Then back to the port and ship for a quick run to St Thomas Island.

St Thomas (of the U.S. Virgin Islands) was also named and “discovered” by Chris and the boys in another drive-by discovery on that second voyage. I don’t think Chris was aware the original occupants were the Ciboney who date back to 1500 BC but were replaced by the Arawaks then the Caribes by the time Chris passed by in 1493. There is much speculation over whether Chris actually named the individual Virgin Islands. It is known he referred to them collectively as “Santa Ursula y las Once Mil Virgenes”. This was in honor of St. Ursula who, back in about 383 AD, along with 11,000 virgin handmaidens, were massacred by Huns on a pilgrimage from Gaul to Rome.  Not sure how Chris came up with this but, short version, they have been the Virgin Islands ever since Chris drove by.

The Dutch moved in by 1657 establishing their capitol as Charlotte Amalie wife of King Christian V. The British rolled in around 1801 and took the island without a shot being fired. That lasted only a year when they gave it back to the Dutch (weird). Then they took it back in 1807 and hung around until 1815 when they gave it back to Denmark (those wacky British). The United States showed interest in the island during the Civil War but it never got any traction in Congress (probably preoccupied with financing the war) but came back around when the Danish government approached the US to purchase St.Thomas, St Croix and St. John which they did in 1917 (for $25 Million). Residents were made citizens in 1927 and they got territorial status in 1954. They got home rule in 1970. 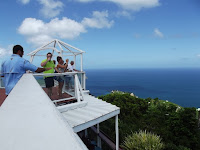 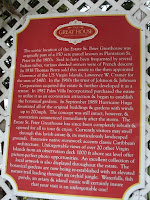 The day started out well in that we got out early. The tour started at 10 so at the appointed time we made our way onto the pier to meet the guides. Unfortunately, the weather was hotter than we left at St., Maarten with double humidity. And, ironically, the more western, Americanized locale only had open busses to cart us around. Oh you can imagine my wife’s excitement at that news. So we packed the busses which turned out to be modified F-350 pickups for the jaunt up the steep (I’m talking 8% grades in some places) windy roads to the top of St. Peter Mountain.

After jostling our weary bones for 30 minutes we were rewarded with a beautiful setting at the top. The St. Peter Great House and Botanical Gardens was kind of the highlight of our trip. Just over a thousand feet above sea level, it had majestic views of Magens Bay as well as a view of about five other islands looking toward St. Johns and points north and east. The 11 acre estate was once a plantation and home to a Virgin Islands Governor. There is a large tropical garden and even some exotic birds to check out. Very cool. 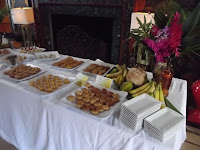 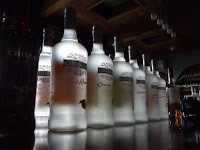 The best part was the sampling of various Caribbean finger foods and the sipping of 15 different flavored rums by Cruzan from near by St. Croix. The Company is family owned by the Nelthropp family since 1760 and produces some fine rums in 80 to 151 proof. It's pronounced "kru-zhun" which is what you do after having the 151 proof stuff. Wow! 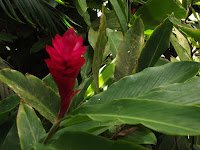 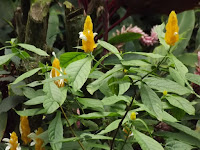 The garden is steps down from the main house and has some pretty cool exotic birds and flowers. As soon as you make your way down, you're completely surrounded by thick jungle as though you've been transported to a different place.

The complete downside of the trip came when we arrived at San Juan Puerto Rico. First time in Puerto Rico, we did not opt to stay a couple of days (yes..I know we've been told about the beauty of Old San Juan) and had to make our way to the airport. 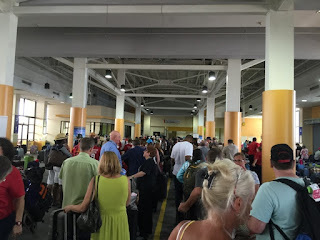 INS chose that day to be one of the worst debarkations we've ever experienced. There were like 10 lanes of cloistered crazy people, in an airless, humid, warehouse, trying to drag all of their luggage through Customs to get your passport scanned and a, "thanks for playing" grin from a Customs Agent I wasn't sure English was his first language (hey...we were supposed to be in America again). Don't get me started on the que on Calle Marina in the blazing sun waiting on a VERY disorganized transit crew trying to match luggage and people to their busses for the trip to Luis Muñoz Marin Airport for the luxury of flying 3 hours to Miami for another three hours to Dallas. The vacation was officially over!
Posted by Nick Saraceni at 3:08 PM