Night at the Wales Winery

You might recall a visit to the Wales Winery in McKinney, Texas. John “Josey” Wales was sponsoring evening events outdoors on his winery. We got ourselves on his e-mail list and (after the weather cooled considerably) decided to take one in. It wasn’t until October 2nd when, after several months of 90+ days and sometimes nights, the weather broke. The north wind pushed through and promised a rather crisp evening, which actually required long pants and jackets. 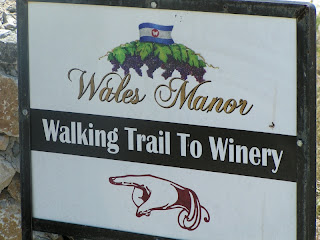 I should explain that in Texas we have two distinct weather patterns. For most of the year we ascribe to a southern wind, which rises from the Gulf full of humidity and warm (some say stifling) air. It drives up north and slams into the cooler air of the Midwest and generates the tornadoes we see on CNN and Discovery channel. Depending on where that cold front resides decides where the tornadoes strike. It has come as far south as central Texas but has reached down toward the areas at a line from Austin to north of Houston. Most of the stuff occurring in the south Texas zone are those pesky hurricanes wending their way from the Caribbean.
So, after a seriously hot summer, you hear there’s a north wind coming, we break out the fall clothing and open the champagne. Like the winter storms of New England, the nor’easter we get tends to be very cold blowing air (admittedly without the driving snow or sleet), which can cause one to cover their plants as well as the outside water spigots so you don’t freeze and break a pipe. Though the cold front moving through that night was just a short break in the action, it was welcomed relief for a hot, damp north Texas.
Joined by our friends (and concerted wine drinkers) Debbie and Torrey, we got there as sunset came upon us. Well, there was that brief unwillingness on our part to concede we were kind of lost. The guys were in front and the women were in back. Debbie had us turn up onto a road she felt was the way to the winery. Being the dutiful husband, Torrey (against his better judgement) took the path and we quickly saw we were not on the right road. Though Debbie quickly conceded she was wrong, Torrey and I took the male view of (as I’m sure Columbus did), “Hey, let’s see where this goes.” As the sun was setting (recall the unrelenting darkness of a Texas night) fear began to take hold but a quick check of my iPhone GPS app found we were actually circumnavigating around the winery land. Two quick turns and we were there. Thanks Steve Jobs, we might still be driving if it wasn’t for you.
Once there, we were herded to our parking place by two 10 year olds on a 4 wheel ATV. A stop at the entrance and we paid our $10 cover charge and, with folding chairs in hand, found a soft spot in the grass to see the stage. Lots of folks were already there (probably took the right turn) and lots of wine was already flowing. Mr. Wales had told us on our first visit that his highest sales are from the outdoor events. We could see why. Turns out the $10 cover charge went straight to the band; Mr. Wales doesn’t take a cut.
That evening we were entertained by Jon Christopher Davis  and his band. Mr. Davis is a singer-songwriter who has written for some big names like Dolly Parton, Hal Ketchum, Tammy Cochran, Sherrie Austin, Billy Ray Cyrus and Timothy B. Schmit of the Eagles. "Little Bird," as recorded by Sherrie Austin, peaked at number 4 on Billboard's Top Country Singles Sales Chart. He also recorded his own songs for Warner Brothers, Sony and MCA Records, with Vince Gill singing back up. 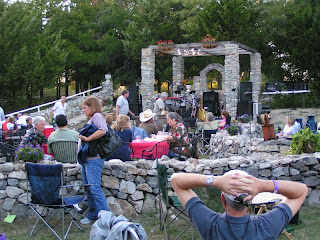 He has collaborated with some of the biggest names in the business like Rodney Crowell, Radney Foster, Steve Lukather of Toto, Stan Lynch of Tom Petty & The Heartbreakers, Charlotte Caffey of The Go Go's as well as hit producers, Dann Huff (Carrie Underwood, Keith Urban) and David Z. (Prince, Jonny Lang).
As part of the festivities, Mr. Wales had a hot air balloon available and for $10 bucks you could ascend on a tether to above the tree line and look out over the landscape. Of course, I had to get the skinny on the balloon and asked questions of the crew as they assembled then inflated the balloon in an open space next to the open-air venue.
The balloon, an AX8-88, was made by Head and consisted of 90,000 sq feet of envelope owned by Ann & Lance Terry of Frisco, Texas. It’s about 73 feet high with the basket and about 60 feet in diameter. It consists of 24 panels or “gores” and uses a combination of Nomex and Kevlar in the panels and lines. The basket contains the 30 million BTU burners and the 30-gallon liquid propane fuel. Once all stretched out, the 15 person crew then partially inflates the envelope with a big fan then fires up the burner to get the balloon on it’s feet. Once up, they began taking passengers including the happy couple who just had their wedding just prior to the event. 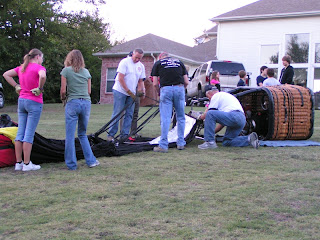 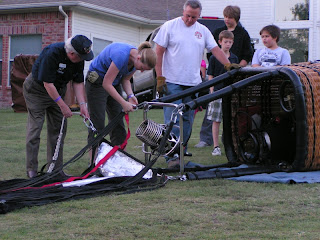 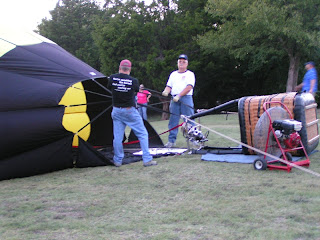 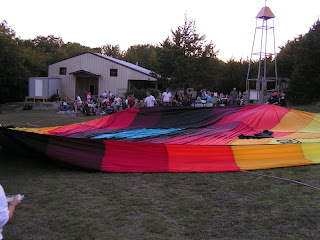 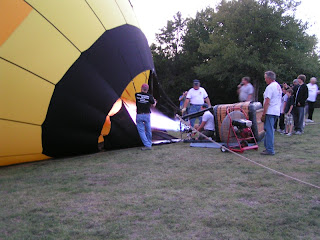 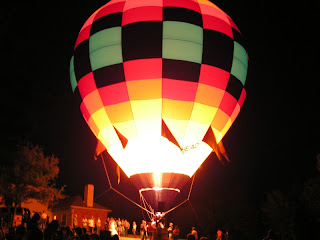 As we settled in, ate our sandwiches ( Jimmy-Johns ....the best) and sucked down a pretty good white and red wine, we watched the balloon flair to life with each ascension. After a time, typically in the evening in Texas, the wind came up and really cooled things off. Trouble was it began to exceed the performance envelope of the tethered balloon. As we sat and listened to the soft Country sounds of Jon Christopher Davis, Mr. Wales broke in to caution those of us on the eastern side of the venue to move because the balloon was becoming unstable in the now swift moving north easterly wind. When the burner wasn’t churning out hot air, the envelope grew dark and virtuously invisible in the now complete darkness that surrounded us outside the glow of the stage lights. 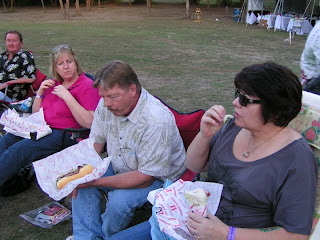 That all changed for as soon as Josey put out the warning, a roiling blob of fabric rolled toward us and, like the Stay-Puft Marshmallow man in Ghost Busters, laid over the crowd causing some to bolt and others to just let the blob have them, dumping people out of their folding chairs onto the cool grass carpet below. The crew had tried to quickly dump the hot air from the balloon but not before it got caught by a gust of wind. Nobody got hurt but it definitely was an icebreaker as strangers laughed with other strangers as they compared notes on the experience. There was, after all, a lot of wine flowing by then. 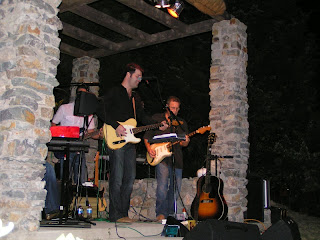 Once the excitement died down, we continued to sit and watch Mr. Davis and his band entertain us with old and new Country music. At one point, Josey (who may have been drinking a little more wine than the rest of us) decided to order pizza for everyone who wanted it. A surprisingly short time later, Pizza Hut delivered about twenty pizzas, which quickly touched the pallets of about 50 people. The store involved probably had to shut down their delivery orders to get this done.
Mr. Davis finished out the evening playing some old Country standards and as my bedtime approached (10 pm Central Standard time), we decided to pack up and make our way home. It was just as Josey had told us, a relaxed gathering of his friends (and customers) to drink wine, eat, and laugh. We did all those and were sad to leave but invigorated with a new sense of community that hanging out with a bunch of friendly Texans can bring you.
Posted by Nick Saraceni at 1:06 PM