On a quiet Sunday, the wife and I decided to take a drive to the city of Rockwall, Texas. Well, we actually made the trek to Terrell, Texas to follow-up on an earlier blog about the No. 1 British Flying Training School (BFTS), located in Terrell. In an attempt to get into the Museum, contrary to the information I had, we discovered the Museum was only opened on Wednesday, Friday and Saturday. Go figure. 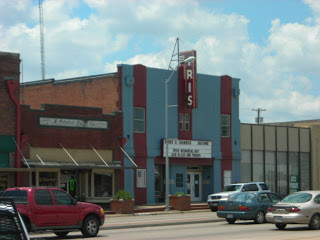 We then moved back into the city of Terrell to ascertain if there were any other historical sites or data I could report on. It seems that the historical content of the town consists of the really old Iris Theater built around 1926 and closed 2001, now a bookstore. Several NFL players and a USA Track Team member of the 1996 Summer Olympics in Atlanta were born there. One such notable is the actor Jamie Foxx who was raised in Terrell. It can be a very small world.

We (ok...I) was hungry and we had originally set out to have a late breakfast on the road so we cruised E. Moore (State Hwy 80 Business) to locate the historic downtown area seeking sustenance. As it turns out, historic Terrell is about two blocks long and consists of a series of old (maybe early 1900s) boarded up brick facades on both sides of the street interspersed with a couple of traffic lights. There seemed to be a dearth of eating establishments (well there was the Sonic Drive-thru). I now understand why Jamie and those NFL guys left.

Still in need of food, I decided to hightail it out of Terrell and head north up the 205 to Rockwall, Texas  . We had been to Rockwall before but I needed photos of Rockwall’s Courthouse and square. They market themselves as the “smallest square in the smallest County”. It is the County Seat of Rockwall County ( what a coincidence) and the smallest County in Texas. Rockwall was part of neighboring Kaufman County but split off in 1873. It is diminutive by Texas standards, its only 147 square miles. The average Texas county is around 1000 square miles. Brewster County is the biggest at 6,193 square miles.

However, for its size, Rockwall County residents enjoy the second highest per capita income of all 254 counties. Not too hard when the City of Rockwall holds approximately 18,000 people and the whole County only holds about 43,000.

Initially, no one could agree on a name for the County or the Town. Ultimately, the city’s name came from a unique geological feature of the area. When residents started digging for wells, they found what they thought were large underground rock walls that were initially believed to be man made. Later study of the wall-like features by geologists and archaeologists found them to be jointed, naturally occuring sandstone dikes but the names stuck. Rockwall is on the east shore of Lake Ray Hubbard a huge reservoir and recreation center within the DFW area. 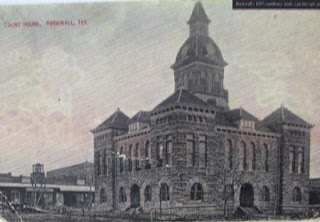 They do have a pretty nice Courthouse but I think you’ll agree the 1893 Courthouse made of local sandstone was the best. It is the fourth Courthouse built in 1940 we see today. The first two burned and the 1893 Courthouse began to crumble (thus the name "sandstone") and had to be razed. The County approached the Feds for stimulus money to build their new Courthouse. They secured $52,000 in funding from the Works Projects Administration (WPA) and completed their Art Deco building for $92,000 bucks in 1941. Probably couldn’t do that in today’s dollars. 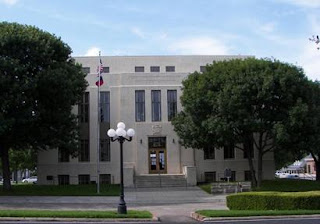 Ok...a word about well meaning native Texans and the overuse of the word "Historic". We have been to a lot of places but never have I seen "Historic" references bandied about like in Texas. Yeah, Texas, all six flags of it, is loaded with history (well it's actually eight. Spain actually held Texas twice and there was that little Republic of Fredonia  thing in 1826 but who's counting). But Rockwall city fathers ( and I'm sure the Downtown Preservation Commitee) have labeled their current Courthouse "Historic"(note transom window below). Construction started in 1940 and was completed in 1941.  Not to say there was nothing important going on (well except that little skirmish commonly referred to as WWII) but I can't say anything of significance occurred in Texas much less Rockwall during that same period. 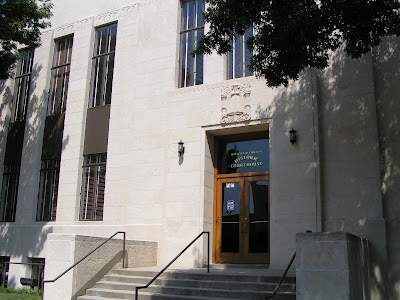 Throughout Texas, many cities and towns describe and market their downtown areas, town squares and various points of interest as "historic". Yet many are just plain old buildings and structures some with little real "historic" value whatsoever. A running joke here is the use of generic State of Texas knock-off historical markers which just state, " On March 2nd, 1836, the Republic of Texas declared it's independence from Mexico. Wild Comanches roamed the plains and Texas Rangers protected the frontier settlements. But in this spot absolutely nothing happened."

On our arrival, I spied a new café ( and the only eatery opened, well it was Sunday) across from the Courthouse at the corner of Goliad and Rusk, TR Café and Grill . It had recently been refurbished and may be the oldest building in Rockwall. According to the owner (and the Historical Society), it was built just before 1900 and originally housed the Lowe & Allen Dry Goods store. In 1911, a millinery operated out of the building and from about 1913-1930, it was the home of Guaranty State Bank. It is now a neat little family run restaurant, which has a light menu of baked goods, sandwiches and salads. During the week, their primary function is as a Starbuck’s style coffee bar for residents trying to wake up for the trip to their big city jobs in Dallas. 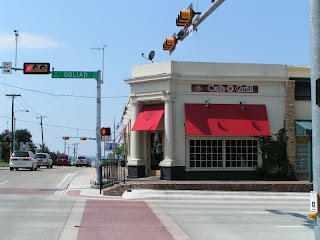 The floor in the dining room hearkens back to when the building was a bank - wood for the tellers and patterned tile for the customers. The old vault is still there and is visible to the dining room. The vault houses the restaurant cooler. The owner said, if the power goes out, it can keep cold for three days without defrosting.

While waiting for the food, I couldn’t help but notice the large sections of open walls showing off the old masonry. I thought this was a nice touch and was a reminder to the patrons of the history of the old building. When I commented about this to the owner, he said that was an unintentional consequence of leaving the masonry exposed.

He explained that the original masonry was so poorly done that he had to make several structural changes to support the walls when he moved in. He said I should walk around and note the amount of “dust” on the floors. Every day they sweep and mop the floors of the restaurant. But the next morning they find more dust on the floor where there had been none the night before. Turns out, it’s the dust from the crumbling masonry constantly falling to the floor. So leaving the walls exposed makes it easier to see potential masonry failures and fix them. Gives one a new perspective on using an “historic” building for your business. Any moment, the walls could come tumbling down.

The food came and the wife had their burger and fries and I had the chicken sandwich and side salad. Very reasonably priced and big portions. Thumbs up to TR.

Like most Texas towns, Rockwall had its beginnings as a rural farming and ranching community. In more recent times, farming and ranching have been displaced by tourism and housing. When Lake Ray Hubbard was built in the late 70’s by damming the Trinity River, it flooded the western edge of Rockwall County but opened up a whole new growth industry, upscale lakefront housing, where most of the monied residents set up shop. Generally regarded as a bedroom community of Dallas, new home development has made parts of Rockwall somewhat exclusive and gated communities litter the landscape.

Rockwall does have an extensive lakefront mall, marina and resort area along Lake Ray Hubbard that we plan to take advantage of and will report back when that happens.
Posted by Nick Saraceni at 11:26 PM