Our arrival in Roatán, Honduras was our first venture into South America. There is apparently a distinction between Belize in Central America and its southern counterparts. I thought anything above the Panama Canal was Central America. Oh, well. 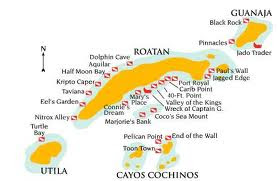 Roatán is an island district of mainland Honduras. It’s about 37 miles long and only 5 miles wide. Of course, the slave traders and stupid white folks couldn’t pronounce it correctly and called it either Ratan or Rutan. There is a pretty good road system, which you can take all around the island with a look and feel of Hawaii. We entered, for all intense and purposes, a small cove along with the Royal Caribbean “Glory of the Seas”. We had a parking space just behind the RC behemoth, which was at least a third bigger than our ship. All the newer ships now have “thrusters” on each side of the ship and are not dependent on rudders or tugboats to move them around in a harbor. You can turn these bad boys on a dime and park them like you parallel park a car (there’s a lost science). 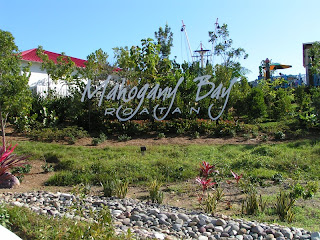 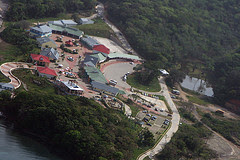 It’s a neat little place without a “town” per se but a built from scratch outdoor mall. It led to a very picturesque beach resort where you can drink and fry to your heart’s content. Remember the tropical sun is just a little different from our northern climes. Even as the winter solstice pulls the sun a little more south, it’s still packs a punch and we tourists forget the sun screen and Pow! as the first mist of that first shower reminds us. 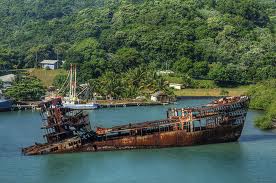 No excursions this time. We did walk through the market place and get down to the beach resort. We must have looked like good co-conspirators for an older couple who approached us as we entered the queue for the chairlift ride to the beach. You could walk or pay 12 bucks a head to fly over. Dianna wanted to fly and take more pictures with her phone (of course).  They came up to us and in low voices, said they would give us their wristbands to take the lift. It seems the wife had convinced her husband to use the lift, problem was he’s afraid of heights (go figure). So, in broad daylight, with our backs to the ticket booth, they slipped off their bands and passed them off  like a hand-to-hand dope deal (I didn’t say we were very good co-conspirators).
With our newly acquired wristbands on we made the trek to the beach. More people eating, drinking and frying but having a great time. We had the nachos (damn, Velveeta), a couple of soft drinks at Fat Tuesdays and made our way back via the lift. On our return to the ship we had just enough time to pick up some Jamaican honey (apparently honey was on the fridge shopping list) and made it back through security with only three bags of stuff. Each day we return to the ship with the corresponding number of bags.
At the appointed hour, we slacked the lines and heaved to. Well, just getting into the spirit of things, Roatán, like most of our stops on this trip, were home to many pirates and seaborne explorers. These cruise people don’t mess around. At once, there was the ships horn, somebody dropped that baby in drive, and off we went. As we whisked by the beach we had attended that morning, it occurred to me that these resort islands really are dependent on the tourist trade and especially the cruise ships. The beach and the surrounding shopping center were closed up, void of people like the last scene of “On the Beach” (1959). Roatan’s a pretty cool place and we might consider returning for a full-blown vacation. It has all the makings of a tropical paradise. Onward to our next destination, Cozumel. 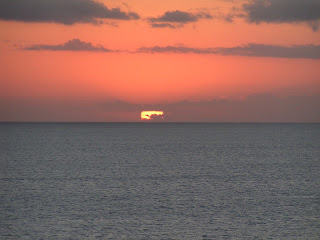 I need to mention the “road trip duck”. I believe the only people who may wax poetic about the “Duck” may be Al, Curt, Dana and Sharon. They will recall a tradition we had at my old Sheriff’s Child Abuse Detective job where all Investigative Travel (i.e. Road Trips) had to be accompanied by a little fuzzy Duck we "liberated" from the Center for Child Protection at Children’s Hospital in San Diego. Photos had to be taken with the Duck in significant locations to be preserved for future generations. 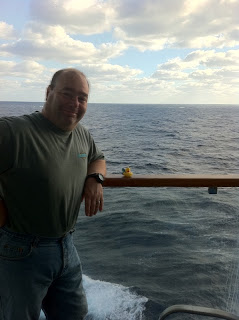 Coincidentally, since we’ve started our weekend road trips here in Texas, Dianna has instituted a similar tradition with her digital documentation of everything she does. Thus we have hundreds of shots which are quickly filling up her iPhone (and the basis of the AT&T shutdown mentioned earlier) of a little plastic duck (much easier to stuff in a purse) in various locales including our cruise. Perhaps, if you remain on her “nice” list, you too can be the recipient of a shot of the duck. 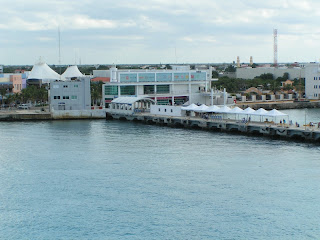 On our arrival to Cozumel we had scheduled an excursion to a Tequila Tasting class given at the  theme park Discover Mexico . Whenever we’re in Mexico, we try to go to a Tequila tasting. It’s one of the few places you can try and buy various Tequilas and our favorites, flavored Tequila Liqueurs. There are many flavored Tequilas out there but few are sold outside of Mexico. So we attended one at the park and our Tequilier was Javier. Turns out, of all the ships that had docked that day (6), we were the only ones who had signed up for the class. More for us, right? Oh, except that we were on the last day of our medication and couldn’t drink. Did I mention how much fun I was having?
All was not lost, in that although Tequila is generally between 35% to 90% alcohol, Tequila Liqueurs are usually 12% to 19%, thus, by law, they cannot be called “Tequila”. So we were able to sip a little just to get the taste. Obviously we survived. Thanks Doc.

The real cool part turned out to be the personal tour of the Discover Mexico Park we got as part of the package. Javier handed us off to our own personal tour guide who took us on a very informative tour of the park. The great thing about this park is that all the exhibits are to-scale models of the Mayan Temples, historic buildings and portions of Mexico City depicted among the many Pre-Hispanic, Colonial and Modern Mexican wonders along their beautiful outdoors walk with indigenous natural and exotic flora and fauna along the way. 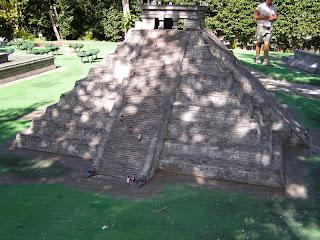 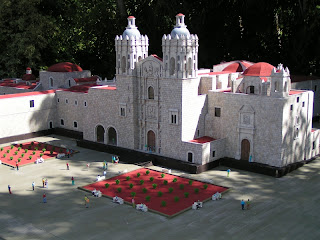 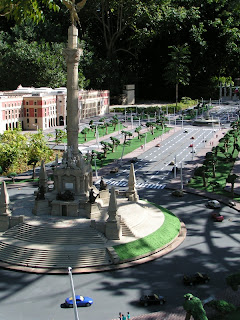 I have to say that it kind of blew me away. It is a little hidden secret of the Cozumel experience and I was surprised it wasn’t better advertised to the tourists. There was an art museum and an impressive video viewing which took you to all the major points of interest and cultural zones of Mexico. And of course a park store to buy locally made gifts and jewelry and…. our Tequila. All of the exhibits were very well done and really should be a “must see” for any first time visitor to that part of Mexico. Yes, that's us at Senor Frogs at the foot of the pier in Cozumel. Just in case you're wondering, I had a Sprite and Dianna has a Diet Coke. The chicken nachos had real cheddar on them. 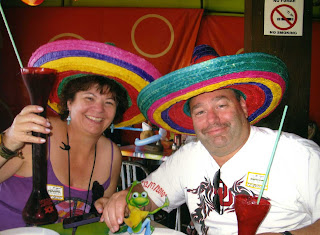 We got back to the ship with our booty but had to give up all the alcohol to Security. They x-ray your stuff as you come back aboard so they’ll catch you if you try to smuggle it aboard. Of course the ship would rather have you buying their overpriced drinks so you can’t get it back until the last morning so you can pack it to leave. We had one last full day at sea and then back to New Orleans on Sunday morning.
Posted by Nick Saraceni at 2:31 PM