The Last of it 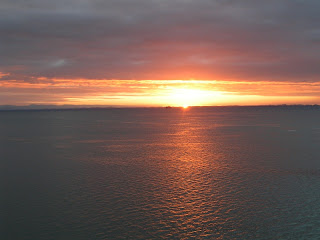 The following morning I was surprised to see the sun rising through our balcony window. See we were on the port (left) side of the ship and we should have been steaming north back toward New Orleans. Thus the sun should have been on the starboard side. With a check of the ship’s cable channel, I could see we had changed course and were heading east toward the Florida Keys. I had a brief flash of Sandra Bullock trying to stop her cruise ship crashing into the dock but in checking with the room steward he told us a guest had taken ill and needed immediate transport to a hospital on land. This will become our third helicopter rescue of a passenger in our travels. We had two people taken off our Hawaii cruise back in the late 90’s. I don’t know how much it costs for one of these Medevacs but the cruise line asks for half the cost UP FRONT and it’s up to you to either pay the rest or get your insurance company to kick in the rest.

We ran eastward for three hours until we were in range of the Key West Coast Guard station while the crew cordoned off the aft sections of the ship for the rescue. Around lunch, a Sikorski HH-60J (Jayhawk) came in and made several passes on the port side (lucky me). The Jayhawk is the Coast Guard version of the Army's Blackhawk. It's like seeing a Chevy Tahoe next to a GMC Yukon. Same airframe with nicer ashtrays. They sent along a  C-130 four-engined transport along for insurance as well. The 60 then pulled into a hover abeam (alongside) of the ship in preparation to hoist the patient onto their craft. The HH-60 is a relatively large twin-engine helicopter, which is way too big to land on the landing pad on the back of the ship. It’s easier and safer to send the PJ ( rescue swimmers in the Coast Guard) down to hook up the patient in their litter and wind him back to the aircraft. 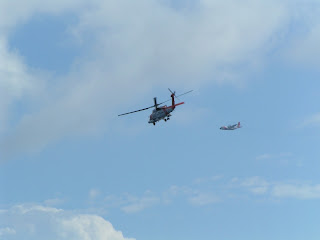 A word about PJs. These are mentally challenged people (and some women) who volunteer to go through some of the most arduous training in the military to fulfill their lifelong dreams of jumping out of perfectly good boats and aircraft into the same sea states that just sank the vessels or washed away the crew members they were sent in to save. Many get enough training to qualify as paramedics. It was reported that in the first five days following Katrina, Coast Guard PJs performed more than 33,500 rescue and hoist operations of Katrina victims stranded on rooftops and in floodwater. I salute them. I’m glad they’re out there protecting us.
Once the rescue was completed, the ship made a gentle turn back north. Now with the sun in its proper place, the Captain had to make up for lost time and distance to get us back in time. Unfortunately that required a commensurate increase in speed, which returned us to the bobbing and rolling we experienced on the first day of our cruise.

The last day at sea is a mixed blessing. Certainly there is the beauty of the sea to take in but a lot of packing is going on throughout the ship. We’re trying to stuff all the ill-gotten gifts we’ve picked up for the last seven days and the crew is getting things in order to turn the ship around in New Orleans. The next cruise is scheduled to leave that same evening after we arrive.


The last night we decided to take in the formal dining room for dinner. When we got there, we were asked if we would consent to dining at a table with another couple. If you’re a couple who wants company, you can ask the concierge to bring over another couple to dine with you. We agreed and got to meet Marcel and Sheryl of  Abbeville, Louisiana. They turned out to be great dining partners.

Marcel was a retired tax preparer and Sheryl was a retired commercial photographer and a volunteer docent at their town’s Cultural Museum. Marcel really belied his age of 70 and Sheryl was 10 years his junior. Inevitably the question came up as to how they met. Turns out they met online on Match.com and married soon after. They've traveled the world. Marcel is a retired military Vet and they use his travel privileges on Military transports. Sheryl said they've been all over Europe, Asia and the Middle East by going Military Stand-by. Military flights in  C-17s are not glamorous affairs and they usually have to travel like the service people in webbed jump seats or sleeping on the metal floor in sleeping bags with the cargo. The transports are usually a little dirty and not heated spaces so it can get real cold at 30,000 feet. But Sheryl keeps a supply of $5 dollar garage-sale sleeping bags and they just toss them in the trash when they’re done. They were very funny and informed people and we were glad we made the decision to join them.

Our next mission involved retrieving some bottles of Kaluha Dianna got from the duty free liquor store on the ship. Ironically, we were directed to a storeroom right next to a conference room which held the meetings for “Friends of Bill W”. To keep things discrete and not embarrass anybody, the secret code for Alcoholics Anonymous meetings on the ship are named after the group’s founder, William Griffith Wilson. Not that I would know that.

There was no reason for two of us to wait in line and I chose to stand in the comfort of the connecting hallway. I was in nice dinner attire and must have looked to some as one of the ship’s staff. As people arrived in the hallway (and many looking in need of a drink) they kept asking me for directions to the waiting area for the booze. I immediately took on the practiced professional aire I acquired from my many years in law enforcement and began directing them to their destination.

One older couple (much older than Dianna and I) came by and the gentleman was obviously upset about having to stand in line for his alcohol purchases. As they approached, the man lit into me about the injustice and embarrassment he and his lovely wife had to endure to wait like Somalis at a UN food distribution center to collect their booze. He said the cruise line was treating them like children in not allowing them to keep their alcohol in their room. On behalf of Norwegian Cruise Lines, I apologized profusely, handed him a comment card, told him to note it on the card and turn it in to his cabin steward immediately upon his return. This seemed to ameliorate him. Then he and his wife thanked me for listening. I may have a future in public relations after all.

With all our stuff packed, we decided to try the unassisted departure in the morning. On cruises, you have the choice of putting out your bags into the hallway the last night. You apply some tags to your bags, the bags are whisked off the ship and you claim them back in the terminal at your assigned departure time. The stewards take them below to be moved to the dock when we tie up. We decided to roll our own stuff off when the gangway hit the deck. This turned out to be a bad idea.

Let me explain. Recall our unexpected eastward run to get a passenger to the hospital. This set our return time in serious jeopardy. We were scheduled to get to the pier at 7 a.m. and begin debarking at 8. We were well off the mark and even with a high speed run back through the Gulf, we didn’t get to the dock until almost 9 a.m. Realize that there were many folks expecting to make airline connections in New Orleans, so there were a lot of anxious passengers standing around the ship wondering if they were going to have to make some last minute expensive rebookings. So a sort of hypnotic suggestion ran through the ship that keeping their bags would expedite their departure and get them to the airport on time. 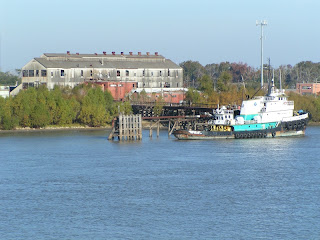 So when morning came, there were people standing all over the ship next to stacks of their luggage. Simultaneously, on the morning of our departure, the crew are busily getting the accommodations back in pristine condition for the next bunch of giddy travelers coming on in about four hours. So all guests are encouraged to leave their rooms as soon as possible to select areas of the ship dictated by the colored tag system issued to you by the stewards the night before. That's the plan anyway.

Seeing this tidal wave of walk-off passengers rising, the staff decided to organize the walk-offs onto the starboard promenade deck (where we held our frosty boat drills on the first day) to queue them up for the single gangway departure point. With the ship still steaming up the Mississippi, they directed us, dragging our luggage with us, to the rails for the docking. Problem was it remained cold in Louisiana the entire week and was still in the 40s on our arrival. So there we were, in the biting cold wind, desperately looking for any sign of the Greater New Orleans Bridge where our berth was located. 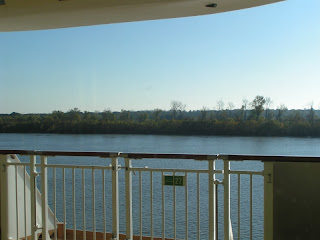 This went on for about another 90 minutes until we pulled alongside the dock. Then there was a delay as the longshoreman finished cinching our lines securing us to the dock. Another delay while the ICE people came aboard the ship looking for Al Qaeda and to do their checks while a portion of the ship’s crew got off the ship, went through an INS check in the terminal and returned to the ship. The clock was now approaching 11 and the mood was getting ugly as the departure staff conducted the last ID check with each passenger as they headed for the gangway. We were required to swipe our Sea Cards one last time to get off as we each took turns squeezing through the queue and onto the gangway to freedom and warmth.

Now that everyone has to have a passport to travel abroad, it made the trip through Customs a little easier. It wasn’t too long ago that you just needed a birth certificate or citizenship papers to go through Customs. That was a time-consuming process as INS officials had to make heads-or-tails of foreign or unreadable documents. Now they swipe your bar-coded passport and ask whether we had anything to declare. Having declared our precious booze, we headed to the parking lot and headed for the US-90 and the Lake Pontchartrain bridge.

Just when we thought it was all over, as we exited the parking structure, we got a desperate call from our daughter Nicole telling us our Chocolate Lab Marley was in distress and needed to go to the Animal Hospital Emergency Room. With that disturbing news, we backtracked our way west then north through Louisiana, back into North Texas, and home. It was a long and silent 8-hour drive.

Once home we discovered Marley had a bout of pancreatitis. It was touch and go for the first 24 hours but we were able to bring Marley home, none the worse for wear, by the following Wednesday in time for Christmas. I think it's going to be awhile before we see the inside of a cruise ship any time soon.
Posted by Nick Saraceni at 11:22 PM