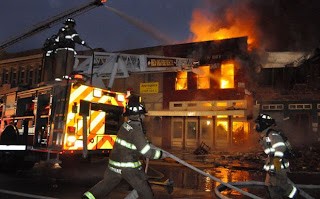 A terrible thing happened this morning with the demise of the 1879 Chisolm Grill from fire. As you may recall from an earlier posting the Chisolm Grill was located in the  Waxahachie, Texas town square. The early morning fire had the Waxahachie FD scrambling to put out the blaze but the 19th Century all wood construction thwarted their efforts and the restaurant, and much of the adjoining businesses, were consumed. The restaurant had just changed hands to new owners a short three weeks ago and early reports state they plan on rebuilding. We can only hope their right. They had the best biscuits and gravy and the sweetest tea in the Crape Myrtle capitol of Texas.