In our eternal efforts to try something new, we decided to take in a rather unique event at the brand new 100,000 square foot modernistic  Irving Convention Center in an area of the Metroplex known as Las Colinas in Irving, Texas. The quadrangle shaped structure is rather interesting. The steel and concrete interior is sheathed in a box of sheet copper. The copper is punched with small squares which reinforces and continues the overall square theme. I think it’s great but it begs the question, in a region known for it’s extreme weather events, doesn't this mean the Irving Convention Center is a giant lightning rod? Inquiring minds need to know. 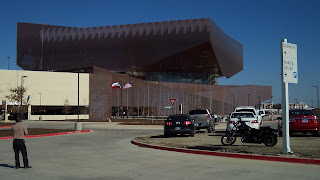 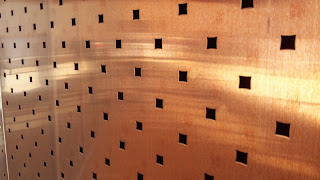 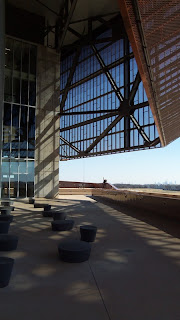 Las Colinas is a very beautiful mid-point between Dallas and Fort Worth. The area is considered kind of the “Silicon Valley” of North Texas containing several big name high tech companies and financial institutions. It is also the home of Valley Ranch, the headquarters of the Dallas Cowboy operation and where they hold their training camp before the new season starts. 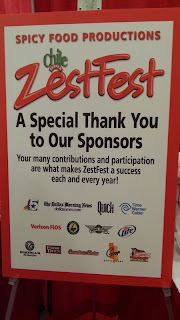 Zest Fest 2011 was the Grand Opening event for the Convention Center. It is a gathering of all makers of hot and spicy sauces, spices, rubs and snacks. Hosted by Chile Pepper Magazine (of course), the convention floor was littered with vendors providing samples and products to buy which would leave the average pallet quivering in their mouths. As I may have mentioned before, Texans fanatically embrace spicy hot foods and bravely slather them onto everything they barbeque, fry and dip. We even came across a vendor that produced dried Habanero chips coated with Ranch and Cheddar cheese powders. Zest Fest is their altar to all things spicy and, as you can imagine, the place was packed. 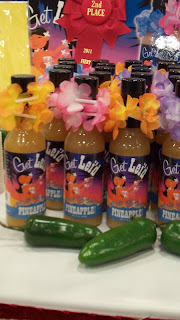 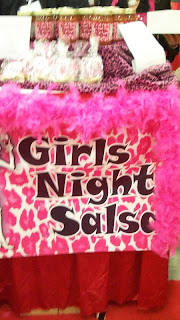 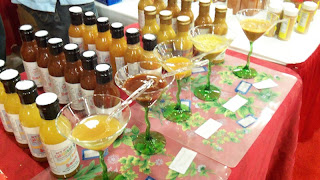 See, if you firmly believe that that little cup of “hot sauce” you get at Taco Bell causes you to wince and exclaim, “Wow, that’s hot!”, brother, you are in the wrong place. There are the little mom and pop producers using hand grown or organic ingredients with cute names like “Get Lei’d” and “Hey Mon’ Carribean Sauce”, there were more ominous brands called “Crazy Uncle Jester’s” and “Defcon Sauces” . 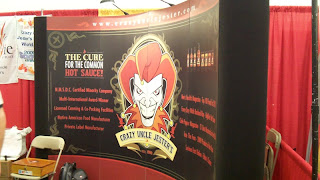 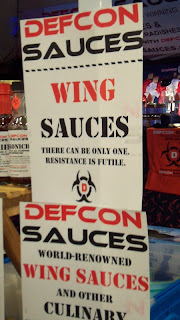 As I went by the Defcon display, a wild-eyed young man with lots of piercings and tattoos approached and asked me if I wanted a sample. Ok, I'm a pussy when it comes to spicy. I like a mellow hot sauce that gives a gentle and trickling burn as it wends it’s way down my throat. Something quickly extinguished with a sip of rum and coke. I asked the lad if he had a full-bodied “mild” (I distinctly recall saying “mild”). He smiled and produced a little plastic cup just like the ones you get your meds in at the home.
The base was a viscous mix tinted yellow as it rolled about. I gave it a swirl and noted it tended to coat the sides of the cup like a fine wine does (then I remembered, napalm has the same characteristic). This  stuff had “legs” like a fine Bordeaux. Perhaps it was the neon lighting of the convention floor or maybe the reflection of the strobe and blaze of the deep blue and purple “black lights” of  the display that mesmerized me into throwing caution to the wind and downing the concoction in one fell swoop. Bad idea.
Ever open an oven and can see the shimering heat waves rise up to meet you and suddenly feel the heat strike your face? That was Defcon’s “mild sauce”. A mixture of horseradish-laden ingredients some of which you probably need a special license to possess by the U.S. Nuclear Regulatory Commission. It’s part of something they refer to as the “Death Match Series” of sauces. They even provide Nutritional Information for their products. This stuff hit my lips and tongue from about six inches away and then quickly flushed down and around my tonsils, collecting briefly at the entrance of my esophagus, before dropping down into my stomach. I had a Discovery Channel visual of the molten steel pouring from that big bucket sending red-hot sparks flying.
The human body is an amazing thing and can give you signals when it knows something bad is about to happen. The first was the nasal hairs burning away as the cup passed under it which shut off my airway so I wouldn’t inhale the viral fumes. It didn’t matter because I failed to heed the warning and instantly burned a path along my lips, tongue and inner mouth. I now know what it feels like to consume drain cleaner, the really bad stuff containing lye. Thank goodness we had the foresight to have aquired a Bloody Mary from an earlier booth. I didn’t even taste the custom Tabasco-like additive of that vendors making. My eyes teared up worse than when ‘Ole Yellar died. My distress was noted by several passers-by who just giggled and passed me up like a robbery victim in New York.
Their website says it all:
“ You are about to embark on a journey that will introduce you to a new outlook for the human condition. You will experience the euphoria knowing that you have found the path to your taste buds Nirvana.
We offer different volumes of heat, depending on your physical need (you know you don't want it, you NEED it). So show the world you have achieved the highest level of consciousness possibly attainable through ingestion.”
What more is there to say.
Everybody there is vying for something called the Scovie Award which is dedicated to rewarding those who can produce the finest fiery foods and barbeque. Congratulations to the winners and even the losers. “That was some-a spicy meatballs.”

Of course, we were disappointed in the that there were no other foods to eat. We went under the misguided conception that there would be stands of barbeque or something fried to eat while we were there. With our stomachs now grumbling, we set back out to the toll way to seek out sustenance. 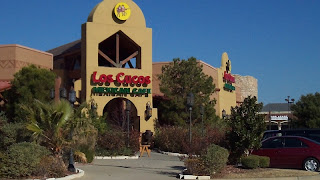 Luckily we came upon what turns out to be a chain Mexican restaurant in Plano, Texas called  Los Cucos. After taking in the extensive menu, Dianna decided on a chicken stuffed avocado dish and I got the  El Mono mixed platter. Dianna had the most interesting, the kitchen stuffs chicken and cheese into the center of a large avocado, rolls it in batter and deep fries it. They place it on a plate with some rice and black beans. I had a plate of mixed steak and chicken chunks in some caramelized onions with rice and beans. Plenty of hand made soft taco quesadillas rounded out the meal. Both prices hovered around $5.99 and arrived with more food than we could eat. We took two boxes home. A great place to eat along with exceptional service. A big thumbs up.
Posted by Nick Saraceni at 1:59 PM