The weather in North Texas has been grueling. Within the month of February, we started with mild temperatures in the 60’s, it snowed, overnight lows in the teens, wind-chill down to single digits. Then an ice storm layered two inches of ice on top of crunchy snow leading everybody to slip and slide their way to work and school. It warmed up a little, allowing the ice and snow to melt and freeze again. Then another week of icy streets and sidewalks.
This part of the world doesn’t get enough snow to invest in plows so they throw copious amounts of treated sand and ice-melt onto the major roadways. They discovered a little too late that the ice-melt they were using would only work down to 10 degrees. Apparently, nobody knew this. They could have used cheaper and reliable salt but didn’t. At one point, Texas Department of Transportation (TxDOT) had to bring in plows they had in the panhandle (where it snows a lot more) to get the commercial traffic moving and get people back to work.
Thus, we have not been going on our sojourns of late. At the end of February, it was Dianna’s birthday and a break in the weather allowed us to go to the Dallas Zoo. Now I grant you, the weather was still kind of nippy and it threatened to rain but I had promised her a trip to the zoo. Dianna is a big fan of zoos and had voiced a desire to go for some time.

I decided to go that weekend for a couple of reasons. The first was that I had heard the Dallas Zoo was not a very big and sophisticated zoo. Second was that it was the last winter hour weekend and it was only five bucks per person, normally $15 dollars a person (OK…I’m a cheap bastard too). It’s about 106 acres housing about 1,800 animals, which does make it the biggest zoological park in Texas, but not up to the standards we had experienced coming from San Diego. OK, you naysayer natives. We are not Zoo snobs. Hey, one of the coolest little zoos we ever went to was the 2.5-acre Big Bear Zoo in the city of Big Bear in the San Bernardino Mountains east of Los Angeles. 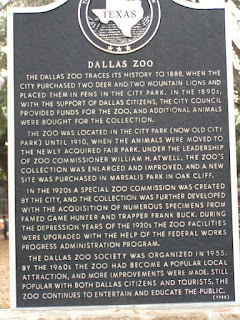 The Dallas Zoo was established in 1888 and though not as old as the Dallas Zoo, San Diego (1916) has been blessed with better funding and stewardship. San Diego Zoo is 100-acres and is home to over 4,000 rare and endangered animals. The Dallas Zoo also runs an aquarium in Fair Park where the State Fair of Texas is conducted. San Diego has a second park, the 1,800-acre Safari Park (formerly the Wild Animal Park) an expansive wildlife sanctuary that is home to more than 3,500 animals.
Environment has to be mentioned here. Clearly San Diego has an advantage in year-round weather and location. It’s hard to exhibit animals that are primarily from warmer climates in a place where temperatures can swing wildly. Dallas has tried to make accommodations with some indoor exhibits but they can be rather restrictive for the animals and not as much fun for the visitor.
That said, Dallas recognized this and has been in the midst of a redevelopment of the park with an all new southern side of the park which has more modern enclosures and a nifty monorail tour which takes you quietly over the enclosures where you can see the animals wherever they are in the enclosures (ala Safari Park). They even have an iPhone app to keep up with the goings-on at the park.
The Zoo was originally a City run function within its old City Park which is part of Dallas Heritage Park. It then moved to Fair Park in 1910 then to its current location in Marsalis Park in the Oak Cliff suburb in the 1920s. A Zoo commission was created and federal Works Progress Administration money helped develop the original “Zoo North” that exists today. By the fifties, a Zoological Society came into being and took over administration of the Zoo from the City of Dallas.  In 1991, they opened the "Wilds of Africa" exhibit and monorail. In 1996, The Dallas Area Rapid Transit District (DART) opened a station for it's electric rail train system. In 2010, the Zoo expanded to include the Giants of the Savannah exhibit. 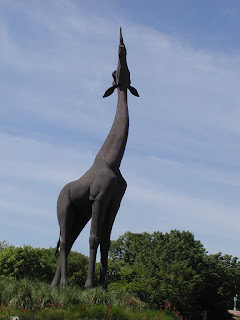 And, there is the story of the Giraffe at the entrance to the park, a metal sculpture over 67 ft. 6” tall just outside the zoo parking entrance. The Giraffe was promoted as the "Tallest Statue in Texas" when it was built in 1997. When the giant Sam Houston statue went up on U.S. I-45 in 1994, it was the tallest at that time at 67 feet. There has been an on-going battle of wills since, over which Texas statue is the tallest. The Giraffe went up and it was discovered to be just short of the Houston statue. Not to be out done, the Zoo had a blade of grass welded to the Giraffe’s tongue (kind of lame) to add another foot making it the tallest to gain the 'Tallest in Texas' title. The sculptor is award-winning St. Louis artist Bob Cassilly. 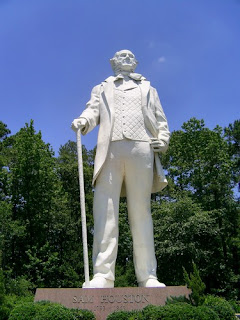 As you may know, General Sam Houston was the first president of the Republic of Texas. He served from 1836 to 1838. He was re-elected again as governor in 1857 to 1861. He was also governor of Tennessee from 1824 to 1827. He is the only governor in US history to be governor of two states. A Texas-sized tribute to General Sam Houston, this is the largest and tallest statue of an American hero built of 66,000 pounds of concrete and steel. The Giraffe is 67'6" from the ground up. The Houston statue itself is 66 feet tall, but it stands atop a 10-foot base. Thus the controversy (if you can have one over statues).
On a personal note, I first saw the Houston statue as we headed south on I-45 on our first trip to Galveston. It was a hazy day and there was a bank of low clouds just above the treetops. As we came around a sweeping curve in the road, the statue suddenly emerged from the mist and just filled the view ahead like an alien giant on the way to destroy Tokyo. It has to be seen to understand. Very impressive. 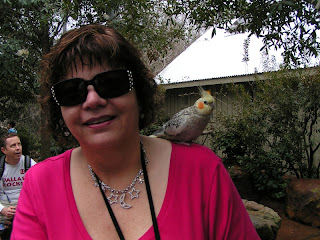 On to the Zoo. It was cold and windy and few animals chose to brave the elements. We did see some great bird exhibits including a small birdhouse you can walk through and handle the birds that land on you. That’s a cockatiel from the Australian Outback on Dianna’s shoulder. Many other beautiful and brightly colored birds were within easy reach for photographing. 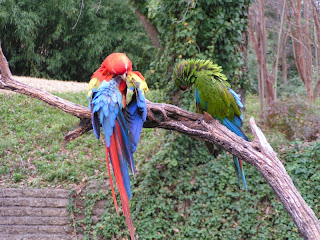 Outside we passed the obligatory Flamingo exhibit. These are Chilean flamingos. As you all know, Flamingos are pink or orange or white depending on what they eat. Flamingos eat algae and crustaceans that contain pigments called carotenoids. For the most part, these pigments are found in the brine shrimp and blue-green algae that the birds eat. Enzymes in the liver break down the carotenoids into the pink and orange pigment molecules deposited in the feathers, bill, and legs of the flamingos.
Flamingos that eat mostly algae are more deeply colored than birds that eat the small animals that feed off algae. Captive Flamingos are fed a special diet that includes prawns (a pigmented crustacean) or additives such as beta-carotene or canthaxanthin, otherwise they would be white or pale pink. Young Flamingos have gray plumage that changes color according to their diet. 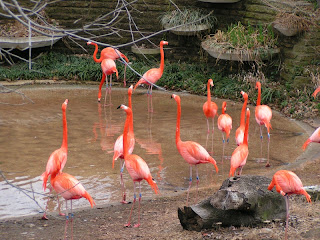 People eat foods containing carotenoids, too. Examples include beta-carotene in carrots and lycopene in watermelon, but luckily, most people don’t eat enough of these compounds to affect their skin color. 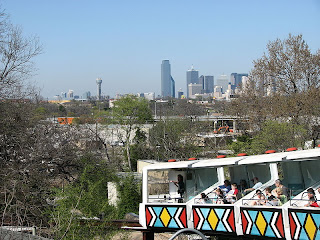 We did take the monorail train around the Wilds of Africa and had a really talented and monotone (kind of creepy like the voice of the guide at the Haunted House ride at Disneyland) guide who gave us a pretty informative tour of the exhibits. It was afternoon (and feeding time) then and some of the animals had made it out into the feeble sunlight. 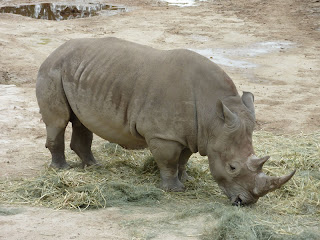 We walked by the Rhino exhibit with its lone African Rhino. At that moment, the female keeper emerged with a bucket of carrots from the back of the enclosure. Rhinos are chronically near-sighted but he perked up as he could hear and smell the food go by. The keeper was well ahead of him and all the Rhino could do was trundle along paralleling her path along the fence to the visitor walkway where she rewarded him with some big fat carrots. 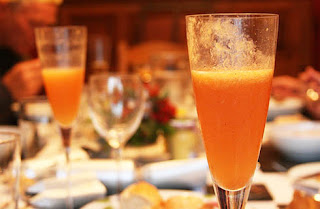 By the end of our trek, we were ready to go. We had eaten some Zoo food court food and were thinking of something more substantial. For her birthday, I had decided to take her to one of her favorite restaurants, Buca di Beppo back here in Frisco. I had Nicole and Billy meet us there for their family style dining. I have never had a bad meal there and there’s always lots of take home leftovers. Don’t forget to get the peach Bellini’s. A great cap to a meal and our day.
Posted by Nick Saraceni at 3:23 PM