We hadn’t been on a weekend road trip in weeks. Holidays led to some crazy Texas weather and just wasn’t conducive to travel. I scheduled a weekend trip to San Diego to visit my mom and a trip never could get traction. Finally, on a dreary, cold, rainy and windy day, we loaded up the Rogue, booted up Patty and made our way to the town of Howe, Texas.


We did it on a lark after Dianna had read a magazine article on a self-made chef, Robert Morf, who had established a restaurant in Howe to bring high-end cuisine to North Texas. In short, we failed. Well, we did find it but it was Sunday and wasn’t opened. Wyoming’s Restaurant Wyoming’s Restaurant - cuisine at 110 East Haning Street was dark and no “Open” sign blinking its siren song.

So, we made a pass or two through  Howe, a small town first settled around the time of the Texas Revolution in 1836. In 1843, it is said, the last Indian battle in Grayson County was fought in the area. Originally surrounded by grain farmers and developed around the Houston and Texas Central Railway railroad track. A weird factoid is that, originally called “Summit” because, at 810 feet above sea level, it was supposed to be the highest point between the Red River and the Gulf of Mexico. Kind of gives you a sense of how relatively flat this land is. 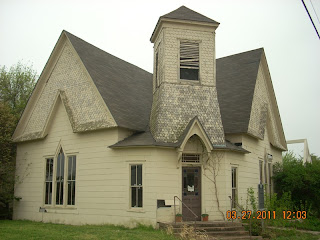 There was a cool Victorian style 1893 First Christian Church of Howe. The last (and quite fragile) example of four similarly built First Christian Churches in Howe. It is now closed and in serious need of restoration. But looking at the state of the town, that may not be in the future for this historic “fish-scale” sheathed structure. Next-door was the memorial for Mame Roberts who was a life-long resident of Howe and was instrumental in leading the charge to “beautify “ Texas. Her efforts were covered by Life Magazine and Reader’s Digest in the 40’s. Not able to eat at Wyoming’s or find anything else going on in town, we headed up the U.S. 75 to Sherman, Texas. 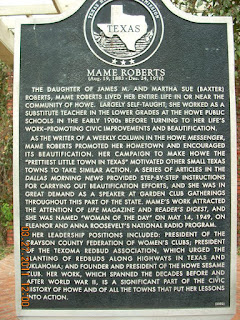 The city of Sherman, Texas is the County Seat of Grayson County which shores up the Red River and provides the border between Texas and Oklahoma. The original settlement was actually a pioneer way station on the Red River for trading and commerce along the river in 1846. It moved south to the location of the first wood framed Courthouse in 1847 about five miles west of the current County Seat where a new log cabin style Courthouse was built in 1848. It was said that it was customary for Juries trying cases to retire to the shade of the old Pecan tree then standing on the public square to consider their verdict. 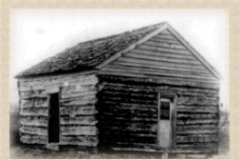 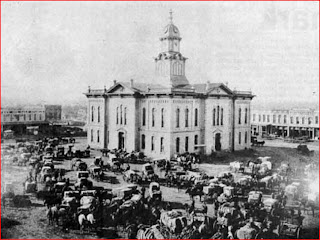 There were a total of five Courthouses built until the majestic Courthouse of 1876 was built in the Courthouse Square. Sherman's 1876 courthouse was burned to the ground by arson in the Sherman Riot of 1930 (May 9th, 1930), during the trial of an African American man, George Hughes. During the riot, Hughes was locked in the vault of that courthouse and died in the fire. Unfortunately, this story repeated itself in a least three other similar lynchings at Honey Grove, Texas, at Benchley in Brazos County, and at Chickasha, Oklahoma. Many felt the onset of the depression had a profound effect on small communities like Sherman, for some reason, fostered this style of vigilante justice in many communities throughout the South. 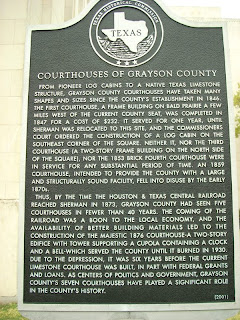 A black farm hand named George Hughes, was accused of raping a young woman. Hughes had come to the farm on May 3rd, 1930, in search of the woman's husband, who owed him wages. Hughes left when the woman said that her husband was in Sherman but soon returned with a shotgun, demanded his wages, and raped the woman. He shot at unarmed pursuers and at the patrol car of the deputy sheriff who later arrived. He then surrendered.

On Monday, May 5th, Hughes was indicted. The trial date for Friday, May 9th. In the days preceding the trial, rumors spread about the case, among them, that Hughes had mutilated the woman and that she was not expected to live. Medical examination of both of them showed the rumors to be false. Officers removed Hughes from the jail to an undisclosed location as a precaution against mob violence, but rumors persisted that he was still there. A few people were even taken through the jail to show that he was not there, but an unconvinced mob gathered anyway.

In the early morning of Friday, May 9th, the famous Capt. Frank Hamer of the Texas Rangers, assisted by two other rangers and one police sergeant, escorted Hughes to the county courthouse. The Sheriff and deputies stood on duty in the courtroom and corridors. Only those connected to the case were allowed to attend the proceedings. Nevertheless, a crowd from all over the region gathered outside the building and filled the corridors from the main entrance to the courtroom doors.

The following morning, the crowd began to stone the courthouse. An American flag was carried around the grounds to incite the men to action. The first witness had begun testimony when the crowd forced the doors to the courtroom corridor, whereupon the rangers fired three warning shots. The jury was sent from the room, and Hughes was taken to the district court vault (bad idea) as the rangers used tear gas to disperse the mob. A few minutes before one o'clock the mob started toward the courtroom again, and again the rangers resorted to tear gas. The District Judge declared that he would likely order a change of venue (really?). Captain Hamer told him that he did not believe that the trial could be held in Sherman without bloodshed.

About 2:30 P.M., two youths threw an open can of gasoline into the county tax collector's office through a broken window. A fire started and quickly spread through the building. It was said that when the deputies guarding Hughes offered to escort him out, he chose to remain locked in the vault (another bad idea). Rangers attempted to rescue him but were cut off by flames. The mob held the firemen back and cut their hoses. By 4:00 only the walls of the building and the fireproof vault remained. To get to Hughes, mob members tried to tear down the walls of the vault. They also drove a small detachment of militia from the courthouse grounds to the county jail.

At about 6:30 P.M., they engaged in a pitched battle with national guardsmen sent by Governor Dan Moody at the request of Sherman officials. The mob forced the guardsmen to retreat to the county jail. Some guardsmen were injured by projectiles, and some members of the crowd were wounded by gunshots. Intent on getting to Hughes, the mob used dynamite and acetylene torches on the vault. The leaders of the mob worked on it until they opened it just before midnight. More than 5,000 people filled the courthouse yard and lined an adjacent street. The militia was gone. Hughes's body was thrown from the vault, then dragged behind a car to the front of a drugstore in the black business section, where it was hanged from a tree. Can you believe it? On May 24th , Governor Moody lifted martial law.

At its peak, about 430 national guardsmen and nine Texas Rangers were brought in to end the violence. Of the fourteen men ultimately indicted for that crime spree, of the estimated 5,000 people involved in the riot, only two had been convicted by October 1931, one for rioting and the other for arson. Both received two-year sentences. Wow. 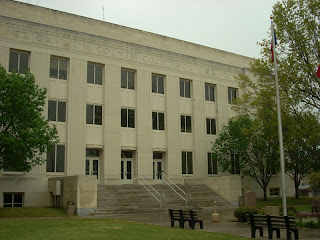 Walking around the “new” Moderne (yes, with an “e”), austere, concrete and limestone 1936 Courthouse found several historic plaques and some atypical monuments found around most Texas Courthouses. 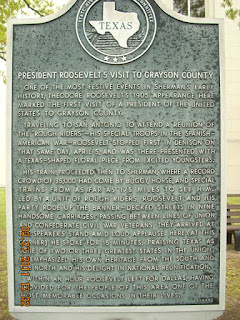 A prime example of how you can over do the official historic plaque dilemma is what many historians call, the “Washington Slept Here” syndrome. In the northeast corner was a plaque commemorating a visit and speech given by former President Theodore Roosevelt in 1905. He was on his way to a “Rough Rider” reunion and spoke for 15 minutes. He then hopped on a train for the ride south to Dallas on his way to the reunion in San Antonio. 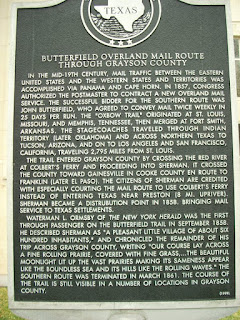 Sherman was also a significant destination and distribution point on the Butterfield Overland Mail Route, which passed through our former home in San Diego and ultimately terminated in San Francisco. 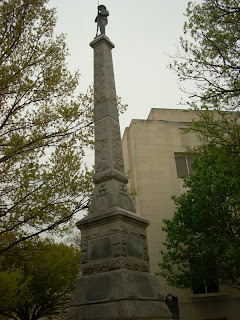 There is the obligatory obelisk to the memory of Confederate soldiers who served in the Civil War (TWONA). This one is of more interest in that it is the first such memorial erected by the Dixie Chapter of the Daughters of the Confederacy #0035 (now the United Daughters of the Confederacy ) dedicated on April 3rd, 1896. Two significant fighting forces assembled in North Texas were the Texas 7th Cavalry (7th Regiment, Texas Cavalry (Mounted Volunteers)) and 11th Texas Cavalry (company "B" of the Eleventh Texas Cavalry Regiment).

The 7th spent the beginning of the war wresting control of North Texas and the Oklahoma territories from the Native Americans then moved to Louisiana where they fought and ended their participation in 1865. The 11th also spent the early years of the war fighting Indians and ended up in Arkansas, dismounted in 1862 as part of the Army of Tennessee, remounted and ended the war in North Carolina.

A swing around Sherman saw a distinct lack of activity around the Courthouse Square so no places to eat. Dejectedly we drove back south on the US 75 for the quiet ride back to Frisco. On the way I recalled an Italian restaurant we had passed by several times before but had not tried, the Italian Villa 904 S. Central Expressway #212, Anna, Texas. Turns out they have a place closer to our home, in  Allen, Texas as well. Great food, I had the Chicken Piccata and Dianna had the sausage Calzone. The meal came with some awesome baked bread and they had a tomatoee house dressing that was great on the salad but just as good as dip for the bread. They actually provided a pasta-twirling spoon for the angel hair pasta that came with my chicken. Nice touch, my Dad would have been proud.

So, just ahead of another band of rain showers, we made our way home with a promise to get out on a Saturday and find Chef Morf and his Wyoming’s restaurant to try out his cuisine.
Posted by Nick Saraceni at 7:43 PM