Trying to be spontaneous and doing original things, I decided I would take Dianna to a Lavender farm in Gainesville, Texas. So we booted up Patty and made our way north (only after a quick breakfast at the Cracker Barrel in Denton at I-35 and US 380).
As we all know, Lavender is part of the mint family of herbs. Grown generally in small shrubs, Lavenders flourish best in dry, well-drained, sandy or gravelly soils in full sun. We are used to seeing more black dirt  here in North Texas (official State Soil, can you believe we have a State Soil?) and yet here we were completely surrounded by yellow sandy soil beneath our feet. The gift shop man said it naturally occurred right through the middle of the old homestead property and was a perfect growing medium. Lavender is typically cultivated in long solid and picturesque rows. 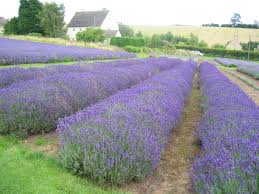 Lavender produces a large amount of nectar which makes a particularly high quality honey and oils that are very aromatic (as any woman could tell you) and is used for a variety of soaps, lotions, salves and a whole slew of additives in drinks, food, heck they even make Lavender sugar and a very sweet syrup for your pancakes. 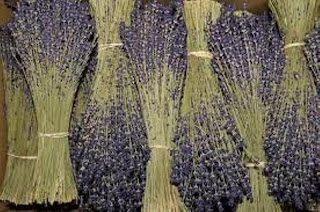 The Egyptians were early adopters when they used it as a perfume and as part of the mummification process. One of the earliest mentions of it in writings were from the Greeks who called the lavender herb nardus, after the Syrian city of Naarda where it was prevalent in the Middle East. The Greeks discovered early on that lavender, if crushed and treated correctly, would release a relaxing fume when burned.
However, the Romans probably gave Lavender its name because it was used extensively as a bath scent additive and a lotion. They referred to it as “lavandārius”, from the Latin (everybody knows this) lavanda (things to be washed), from the verb lavāre (to wash) or livendula--livid or bluish.

Lavender is mentioned often in the Bible, not by the name lavender but rather by the name used at that time spikenard (bad call there, not very romantic sounding) and, folklore has it, either came from the Garden of Eden or it’s unique fragrance may have been bestowed on the plant by baby Jesus when Mary set his clothes down on it to dry. Probably not after a serious diaper change.

Lavender was often used as partial filler in pillows or in bedding. As the body warmed the bed (from whatever activities), the Lavender would produce a gentle fragrance to bring sleep on or some considered it an aphrodisiac for young lovers. A famous nursery rhyme called "Lavender Blue, Dilly Dilly" was written in 1680 and talks of "Whilst you and I, diddle, diddle…keep the bed warm." Those crazy Tudor era entertainers.

To say Lavender has been big with the masses, many have found the oils found in lavender can treat hyperactivity; insomnia; flatulence (that’s important); bacteria, fungus, and microbial activity on gums, airborne molds, and (in mixture with pine, thyme, mint, rosemary, clove, and cinnamon oils) Staphyloccus bacteria. Lavender may even be useful against impotence (Holy Cow!). In a study of men, the scent of pumpkin and lavender rated as the scent they found most arousing. Ok…I’m not going with that observation.

A note about Patty’s performance on the road. Patty is a bit narrow-minded about the path she weaves for us. I knew I had to go north to Gainesville from the Texas mansion but I had timed our sojourn to coincide with breakfast at the Cracker Barrel Restaurant (OK Scott, we’re hooked) just outside Denton, Texas. Patty didn’t get the email that we would have to deviate from due north to get to Denton. This created a certain level of stress in me as I blew through every pre-programmed turn she had laid out in her scheming little computer chip. At each attempt to deviate me from my ever-lengthening westward trek (“Right turn at FM 1385, Right turn at US 377, U-turn at Rockhill Rd you jerk…listen to me!) along US 380, I could sense her getting shorter with me and a rising tone of exasperation in her suggestions as the miles ticked by. Yes, I could have reprogrammed or even turned her off. But she's not my mother and she's not the boss of me!

When I brought this to Dianna’s attention (eyes rolling), she assured me Patty had not changed her inflection or cadence but then women never countenance other women who exhibit traits like their own. As we pulled into the parking lot of the Cracker Barrel, I think I caught a glimpse of Patty’s screen flash a mocking one-finger salute at me as the screen went blank.

Tummy grumbling, I had the Old Fashioned breakfast. Grits (silky), biscuits and gravy, gravy that stood up by itself and only fell at the application of my fork, scrambled eggs and sausage. Dianna had the Granola Pancake breakfast with eggs and bacon. Really good. 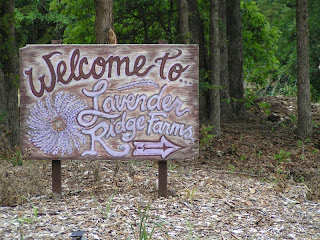 Once back on the road, Patty was demonstrably quieter (perhaps pouting or possibly because of the extensive unwavering drive due north on the I-35 toward the Red River) as we made our way to Gainesville. A quick eastern voyage along the US 82 then Patty found her voice again as she “turn-by-turned” us onto the dirt road leading to Lavender Ridge Farms. But, as payback, she ended our journey at a point which was clearly not at the entrance to Lavender Ridge. Along a winding curve in the road she pronounced, “You’ve arrived at your destination”, and with her silence, tauntingly suggesting, “You’re on your own pal.”

We (I) continued our way cautiously down the dirt road, which made up County Road 178. I was about to give up and backtrack feeling we had slipped by a non-descript driveway when the Lavender Ridge Farms sign peaked around the corner and drew us in. I could see the acknowledging ,“You go, girl!” smirk on Dianna’s face as she commented, “Sure glad we didn’t decide to turn around.” I thought she going to high-five the dash. 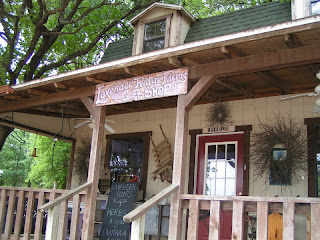 Lavender Ridge Farms is east of Gainesville among the rolling pastures and horse farms of rural Cooke County. Lavender Ridge Farms has been a family owned farm for about 150 years and the most recent generation decided to convert the strawberry and melon acreage from the 1920s and 30s to two acres of Lavender fields.

It was the middle of April and, apparently, we (I) jumped the gun and learned that the Lavender blooming season doesn’t actually starts until the end of May so there wasn’t much to see. To highlight the season, Lavender Ridge puts on a festival over the Memorial Day weekend so families can come out to pick some Lavender, eat some Lavender products and buy from craft vendors who set up around the open Lavender field. Yes, they really like the color Lavender here. 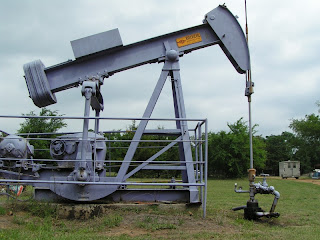 Lavender Ridge is open from April to November (not a lot growing in the Texas Winter) but they have a small gift shop and a Café with homemade Lavender products and a menu of stuff to eat containing Lavender ingredients. 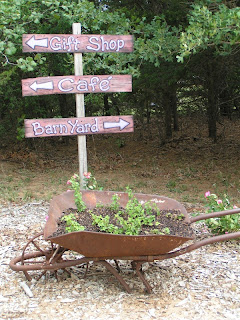 After Dianna loaded up on Lavender soap, scent and some plants, we made our way down to the barn and Dianna got her fix of pigmy goats, horses and donkeys. On the way, we had to stop and play catch with one of the farm dogs named Purty and a really attentive sheep dog.

On the way back, Patty took us in her direct and shortest route fashion back through an assortment of familiar roads back southeast toward home. On the way we skirted Pilot Point, Texas and came upon an old favorite, the Taco Shack where we stopped long enough to procure 6 pork and 6 beef homemade Tamales for future meals. 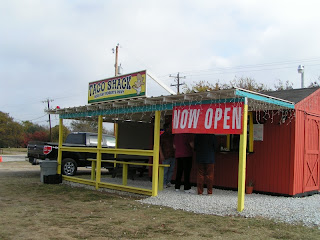 It’s a very calming and scenic place and I think we’re going to try to make it back for the Lavender Festival at the end of May. It’s wild flower season in Texas and we’ll need to ply the back roads to find some Bluebonnets. I’m thinking of leaving Patty home next time.
Posted by Nick Saraceni at 3:55 PM