Recently, we had a visit from our close friends Scott and Silvia Brown from San Diego. Close because we met during a Lamaze class when Dianna was pregnant with our daughter Nicole and Silvia was ready to deliver her oldest, Kevin. Perfect strangers up to that point, their due dates were the first week of July and Silvia went in on July 3rd and Dianna delivered on July 4th, 1984. When we first met, Scott was a phone installer for Pacific Bell and Silvia was working at the Von's grocery store in  El Cajon, California. After realizing the benefits of Civil Service, both became San Diego Police officers. When they retired, Scott made it to Sergeant and Silvia was a school resource officer in their DARE program.
Scott and Silvia had left San Diego for the wilds of Mormon Country in Cedar City, Utah but were in a position to buy in a Del Webb retirement community in Georgetown, Texas just north of Austin. They were in town to visit Kevin and his new wife, Norilou, celebrating their first year anniversary, and to cinch the deal down in Georgetown. On their last day, we met at the Cracker Barrel Restaurant in Grapevine, Texas  for breakfast. It was my first time in a Cracker Barrel Restaurant. Turns out, the restaurants have an extensive menu with some pretty delicious stuff at very reasonable prices. I had the Pecan Pancakes and Dianna had the Hash-brown Casserole. The sweet tea was flowing and we spent almost two hours catching up.
Like us, Scott and Silvia have been traveling the country doing a lot of sight-seeing. Scott likes themes and in one of their recent trips decided to make it their mission to eat at places that Guy Fieri of the Diners, Drive-ins and Dives series on the Food Channel had visited. On this occasion, they told us of their visit to a place called Chef Point Café ( click on the video to watch the episode) in a place called Watauga (Wha-taw-ga), Texas just northeast of Fort Worth.
Watauga itself is a small bedroom community nestled among many bedroom communities with names like Richland Hills, Haltom City and Keller surrounding Fort Worth. Watauga has no significant history to speak of. The first settlers came to the area in 1843 and took its name from the Cherokee word for "village of many springs." The Texas and Pacific Railway came through the area in 1881, which spurred a settlement. Watauga received a railroad station, then and a post office in 1883. The population was 65 in the mid 1930s and 40s, when the railroad station had closed. 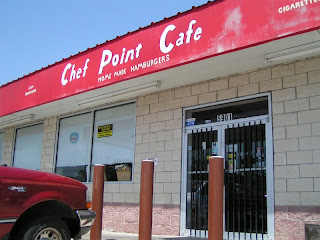 Thanks to Patty, we got there unscathed through the State 121/I-820 maze just west of the DFW airport on a wind swept Sunday for a late lunch. Sure enough, Patty directed us to the parking lot of what looked like a Conoco gas station with the traditional attached mini-mart. This unremarkable building contains one of the best restaurants we’ve been too. The outside belies a gourmet restaurant, tucked away inside, that still holds basic comfort foods like hamburgers and simple traditional Texas favorites like Chicken-fried Steak for the common man (or woman). 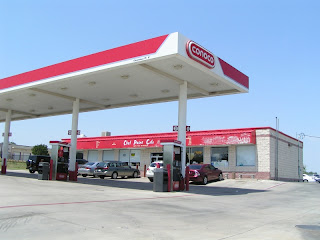 The story goes that when the owners, Gourmet Chef Franson and his wife Paula Nwaeze from Nigeria came to Watauga to open a restaurant, they couldn’t get a bank to loan them the money to open it. Although Chef Franson had genuine cooking creds, he didn’t have any prior experience running a restaurant. To accomplish his dream, he did an end-run on the banks and identified a gas station he could buy instead. He didn’t have any experience running a gas station either but I guess you need fewer qualifications to run it than a restaurant, hmmmm. So, with his new found financing, he left the mini-mart in place to abide by the terms of the loan, cleared out the garage bays, built a kitchen and moderately sized seating area to serve class cuisine to feed a hungry nation. The Chef Point Café menu includes such delectable culinary creations as crab cakes topped with roasted bell pepper, lobster bisque, and grilled sea scallops in garlic butter. 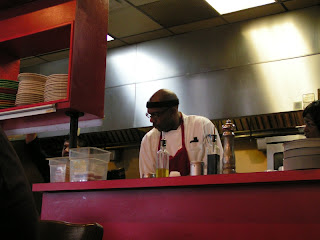 The menu is extensive and it was hard to decide what to order but Dianna settled on the Meatloaf and I chose the Hot Brown Sandwich on their Comfort Food menu.  Our server decided we needed an appetizer of Green-fried Tomatoes to help us mull over the menu which were great. Nicely fried (not over fired as we’ve often seen) with a dab of a very creamy Ranch dressing. Another server came by and decided we needed to have a side of their pasta sauce to dip the fried tomatoes in as well. Good call. 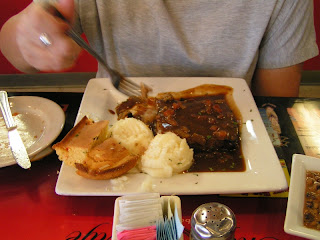 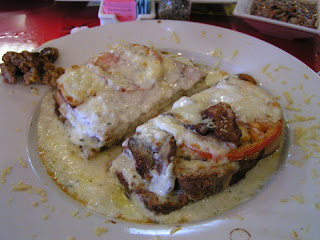 Holy Cow! Then giant portions of food arrived at the table. The Meatloaf was extremely tender and tasted like someone had just pulled it out of the oven just for us. A viscous dark gravy lay over the top holding a smattering of cut vegetables in place. She got some mashed potatoes and a couple of pieces of cornbread on the side. My open sandwich came right out of the oven with a layer of melted Asiago cheese drooling over slices of bacon over layers of Turkey slices and more sliced cheese. There was like this Asiago/Alfredo sauce all over everything. It was something to behold and eat. If someone had thrown a couple of pieces of flat pasta over the top, it could have been a turkey and gravy Lasagna. Folks, I could have cut this puppy up into four portions and still had leftovers. We ended up boxing half of it to-go. 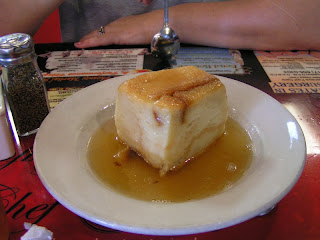 Boxing was a wise course of action in that the word was not to leave without trying the Bread Pudding. We called for one and a 4X4 square of bread pudding showed up doused and floating in a pond of the famous cognac sauce. OMG, to die for. Both of us agreed it tasted like a really moist (and thick) slice of French Toast with the best sweet syrup you can find. This bread pudding was voted best among Fort Worth restaurants. I think it might be the best on the planet. It made the whole trip through the freeway maze of east Fort Worth well worth it.
﻿ ﻿
Yes, before leaving (to complete the experience) we did stop at the mini-mart and get a ‘T’ shirt and two Lotto tickets to round out the trip. If you need to watch the Diners, Drive-ins and Dives episode, go to the Chef Point website and click on the video. The sign on the delivery van says it all, “Five Star Food in a Gas Station”. 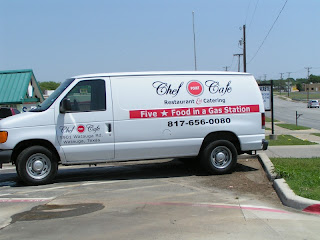 Posted by Nick Saraceni at 5:30 PM