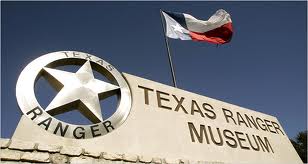 Texas Ranger lore dates the first rangers to 1823, when Stephen F. Austin employed ten men to act as rangers to protect 600 to 700 newly settled families who arrived in Texas following the Mexican War of Independence. Austin called for, "ten men...to act as rangers for the common defense...The wages I will give said ten men is fifteen dollars a month payable in property." The Rangers were formally constituted in 1835. Their pay was officially set at $1.25 a day and they were to elect their own officers. 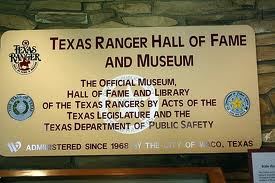 After the Texas Revolution, the Rangers were brought back to act as a force to protect the new Republic against rogue Native American groups and were instrumental in helping U.S. forces in the Mexican-American War of 1846 at the Battle of Monterrey in September 1846. 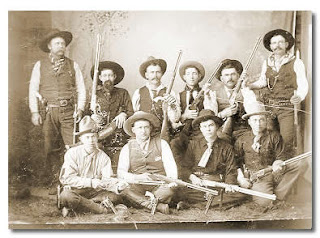 Early Rangers were required to provide their own horses and equipment. They fought battles in which they were often outnumbered by as much as 50-to-1, so it was common for each man to carry multiple pistols, rifles and knives. The more modern day Rangers had to provide their own car, horse, and saddle, though the newly formed Texas Department of Safety (DPS) issued horse trailers. Back then, Rangers were paid automobile mileage and furnished a Colt .45 and a lever-action Winchester .30 caliber rifle by the state. Today's Rangers travel by government cars, airplanes or helicopters and occasionally by horse. 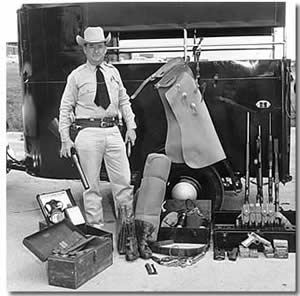 Modern Rangers have the benefit of state-of-the-art weaponry and other equipment. Each Ranger is furnished a semi-automatic handgun, 12-gauge shotgun and a semi-automatic rifle. Rangers are not issued uniforms, they dress as they need to (how cool is that?). A Ranger in Dallas might wear a suit and tie while a Ranger assigned to a rural area would likely choose Western wear. White Western hats, big belt buckles and western boots are the traditional standard. 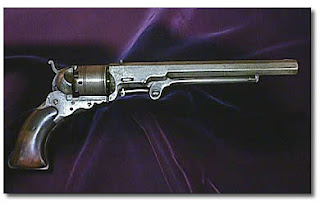 The Texas Republic was one of Sam Colt’s earliest and biggest customers. Sam built them a Colt .36 cal Paterson “Texas” five-shot revolver, a weapon the Rangers used with deadly effect in defense of the Texas frontier. Today they get State issued vehicles and equipment. The standard issue is a .357 Sig P226 but most like the ubiquitous Colt .45 auto-loader usually pimped out with inlays and fancy grips. You can carry anything you can qualify with. 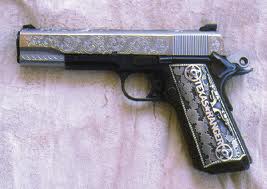 For most of the 1860s, Rangers continued to keep the Native Americans in check and many of them had time to join the Confederacy in the war of northern aggression (TWONA). In 1870 (reconstruction years), the Rangers were replaced by a Federal police force which never really had much public support (Damn Yankees!) and a new Ranger force was recommissioned by Governor Coke in 1873.
Observers point out that Rangers during the late 1800s did some pretty ugly things. In particular, Leander H. McNelly and his men used ruthless methods that often rivaled the brutality of their opponents, such as taking part in summary executions (that’s politically correct for hangings) and confessions induced by torture and intimidation.

This was exemplified by acts attributed to them during the Mexican Civil War of 1910. Before the decade was over, thousands of lives were lost, Texans and Mexicans alike. In January 1919, an investigation by the Texas Legislature found that perhaps as many as 5,000 people, mostly of Hispanic descent, had been killed by Rangers from 1910 to 1919, and that members of the Rangers had been involved in many acts of brutality and injustice.

One of the major problems facing the Rangers during the late 20s and 30s was bank robbery. The situation got so bad; the Texas Bankers Association offered a standing $5,000 reward for bank robbers. There was one catch….the money would be paid only for dead robbers. That is crime suppression.

The Legislature studied the problem and decided to revamp and reorganize the Rangers from a mostly political appointment job to civil service appointments. They also merged the Rangers with the Texas Highway Patrol into its current form as the Department of Public Safety. 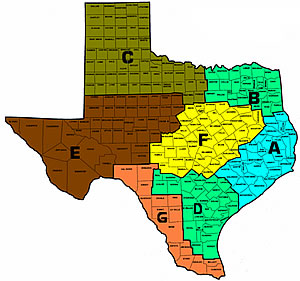 Additionally, from an historical viewpoint, a Ranger's pay was so scanty that the money required for such fancy jewelry was rarely available. Nevertheless, some Rangers did wear badges, and the first of these appeared around 1875. They were locally made and varied considerably from one to another, but they invariably represented a star cut out of a Mexican silver coin (usually a five-peso coin). The design is reminiscent of Texas's Lone Star flag. 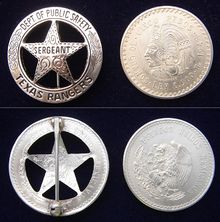 The modern-day badge of a Texas Ranger compared to the obverse and reverse of a 1948 cinco peso coin from which it is made.


The current design of the Rangers' badge was incorporated in 1962, when Ranger Hardy L. Purvis and his mother donated enough Mexican five-peso coins to the DPS to provide badges for all 62 Rangers who were working at that time as commissioned officers.
The “One Riot, One Ranger” phrase kicked around is rather misleading and subject to folklore in that, there was never actually a riot. The phrase was coined by Ranger Captain William "Bill" McDonald, who was sent to Dallas in 1896 to prevent the illegal heavyweight prizefight between Pete Maher and Bob Fitzsimmons. According to the story, McDonald's train was met by the mayor, who asked the lone (get it?) Ranger where the other lawmen were. McDonald is said to have replied, "Hell! Ain't I enough? There's only one prize-fight!" This same bravado was probably exemplified in each and every episode of “Walker, Texas Ranger” starring Chuck Norris ( Honorary Texas Ranger since December, 2010), which aired from April 1993 to 2001. Other Honorary Texas Rangers are John Wayne (Big surprise there), Will Rogers and George H.W. Bush (41 not 43).
In reality, it was such a huge event. The place had attracted many celebrities of the time (think like a Tyson fight in Vegas) including most or all of the employed Rangers at the time. The problem was nobody really wanted to stop the fight but the Governor’s orders were followed and the fight ultimately took place on the Mexican side of the Rio Grande near Langtry, Texas.

Today, Rangers do what most cops do anywhere in America.....except they do it in Texas. They are still considered a para-military force under orders of the Director to “suppress all criminal activity in any given area, when it is apparent that the local officials are unwilling or unable to maintain law and order. Also upon the request or order of a judge of a court of record, Texas Rangers may serve as officers of the court and assist in the maintenance of decorum, the protection of life, and the preservation of property during any judicial proceeding; and provide protection for elected officials at public functions and at any other time or place when directed. The Texas Rangers, with the approval of the Director, may conduct investigations of any alleged misconduct on the part of other Department of Public Safety personnel”.
Typically, they assist most of the smaller agencies in their assigned sectors of the State and most often get called in when a serious crime has occurred where the smaller agency doesn’t have the expertise or resources to handle the case. The Department of Public Safety includes the State forensic laboratories that process evidence for any agency that needs it. 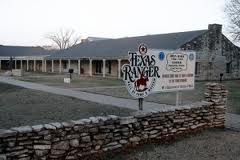 Folks, I cannot relate to you the number of weapons on display at the Texas Ranger Hall of Fame and Museum  in  Waco, Texas . There is room after room with glass cases crammed with hand guns, rifles, shotguns and tooled leather holsters the Rangers have had in their inventory or donated by family and friends or the retired Rangers themselves. I did try to photograph them but the dimensions of some of the rooms really wouldn’t give you a sense of the beauty of some of these weapons and leather. I only include these because they were my personal favorites but really only a small sampling of the stuff I saw. 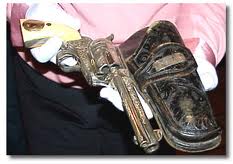 Suffice it to say, you’ve really got to go there to appreciate the place. We did just the Museum in about three hours but if you took the time to pour over all the displays, you could easily spend the day there. Bring extra batteries, you’re camera will go dead before you’re done. Personal experience. 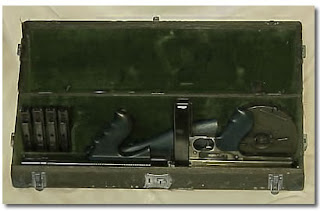 This is the personal 1928 Thompson Machine Gun belonging to Ranger Hardy B. Purvis. He became a Ranger in 1927 and retired as a Captain in 1956. Note the "violin case" it would have come in.


The displays are very extensive but actually, you must see the video the museum has put together. It really encapsulates the history of the Texas Rangers from Steven Austin’s call for volunteers to become Rangers to the role of today’s Texas Ranger. They even have a “Lone Ranger” exhibit of Clayton Moore’s stuff he used in the filming of the series from 1949-1957. The son of the series’ original writer, Fran Striker, donated original prints and memorabilia from the period.

We will be going back. We found a great place to stay, the Bed and Breakfast on White Rock Creek  . There are still museums to wander through (like Baylor’s Mayborn Museum ) and restaurants to try. As soon as the weather cools, which, at this rate, might be sometime in December, we’re heading back.
Posted by Nick Saraceni at 10:47 PM