The weather had broken over Texas allowing us to travel in sub-100 degree temperatures and an actual cool wind to swirl around us from far away Colorado.  Air conditioners could be heard shuttering to a halt throughout Texas. The state  has been suffering under the worst drought since the last historic droughts in the Lone Star State. Rainfall has been recorded in Texas since 1896 and the worst one-year droughts were in 1918 and 1924. Each of those ended the following year with above-normal rainfall ending those droughts. The worst extended drought remains the massive 1950’s event when Texas suffered under drought conditions for 10 years from the late 1940’s until the late 1950’s. We have exceeded the drought numbers during 2011. The water districts are claiming that only historic rainfalls this fall, winter and spring will allow us to water next summer. Time will tell. 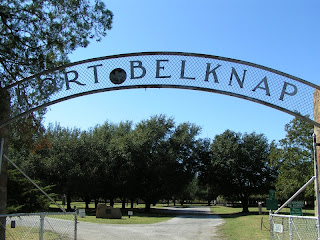 We road off into west Texas to check out Graham, Texas and the historic frontier Fort Belknap just north of town. The land around Graham was purchased by the Graham brothers ( Wow, what a coincidence) in 1871 and incorporated in 1877. The town puttered along until first the Chicago, Rock Island and Texas railroad came up from Fort Worth to connect Graham to the rest of the nation then, the cattle industry and the discovery of oil in 1917. The city was the site of the organizational meeting of the group that became the Texas and Southwestern Cattle Raisers Association, created to police ranching and put a stop to cattle rustling. Graham claims, on a downtown mural, that they have the largest town square in America. Graham is also one of only a handful of towns in Texas still to have an operational drive-in theater. 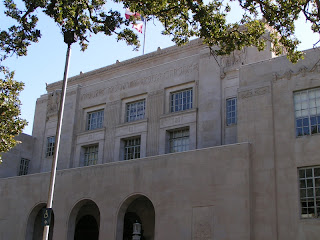 After a brief political struggle with the town of Belknap, home of Fort Belknap, Graham became the County Seat and is on it’s third Courthouse. The current 1932 Courthouse was built using Work’s Progress Administration (WPA) funds and replaced the 1884 Courthouse. The front door facade is now, appropriately, an historic monument behind the current Courthouse. I say that because of a little known event back in 1915 causing the loss of the life of a brave Young County Deputy Sheriff doing his duty to protect the records of the second Young County Courthouse. 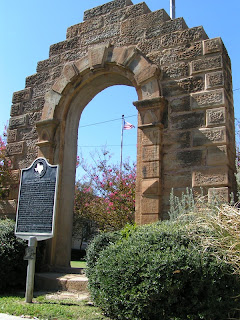 Deputies Tom Cherryhomes  and Riley Dolliins had been employed by the Young County Commissioners Court to guard the Court House at night until the next scheduled District Court could be convened. There were accusations of government misconduct by the former County Judge Eugene Fryand the Commisioners decided to hire Cherryhomes and Dolliins to protect the records from theft or destruction. 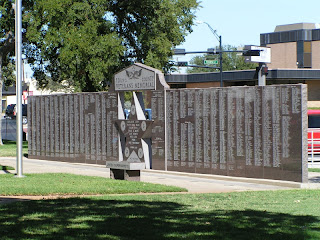 The Courthouse also contains a monolitic War Memorial to all the wars up to the present. A common thing to see in Texas is their passion with honoring their war dead. This is one of the longest granite walls of honor I had seen in our travels. I couldn't help but note a similar theme to others we had come across. 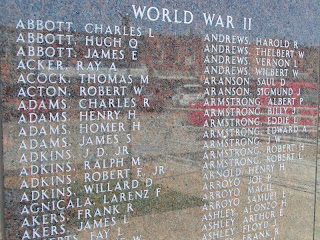 Rural Texas has many extended families which, for the most part, never really stray very far from their ancestral homes. So many of these types of memorials will contain successive names of war dead from the same families.

On this wall, we saw several series of Akers, Adams and Armstrongs in several of the panes of granite. The same surnames could be seen across several wars. It was plain to see that many families had sacrificed their young men over the span of wars from the Civil War to the Gulf. It gave one pause to look at.


Graham is like many of the small Texas towns we have visited. The very clean and picturesque downtown still holds empty storefronts and old historic buildings in need of a paintbrush but cool to look at. There wasn’t even a restaurant in the historic downtown. We (well…I) was hungry when we got there and I sought out a jogging resident to point me to restaurant central on the south side of town.


After a very scenic drive south on Elm Street (Texas State Highway 16) through an old Victorian neighborhood, the road opened up to a glut of fast food, restaurants, grocery stores and car care centers. We chose Mi Familia and enjoyed a great meal. With all the Tex-Mex rolling around the state, it was nice to get into a traditional family run restaurant. I got the beef enchiladas and Dianna got the chicken flautas. Very fresh and flavorful. The sweet tea had just the right amount of sugar and, I want to say, I think they even make their own tortilla chips instead of those bland chips most restaurants just pull out of bags and store in heaters to warm them up.  For dessert, we had a Cheesecake Chimichanga. Wow! It kind of reminded me of sall the fried stuff we saw at the Texas State Fair. Fried Cheesecake, a true culinary coup. With my blood-sugar now at the appropriate levels, we made our way north to Fort Belknap. 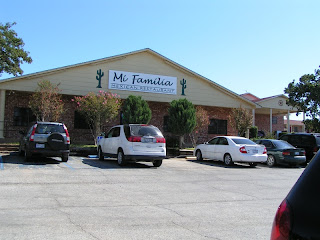 Once known as “Belknap” it is now referred to as Newcastle, Texas. Established in 1851 by brevet Brigadier General William G. Belknap (his son, Bill W. became Secretary of War under Grant) to protect the Texas frontier against raids by the Kiowa and Comanche from "Indian Territory" (the future State of Oklahoma). It was the northernmost fort in a line from the Rio Grande to the Red River. It doesn’t present as the frontier Fort you might see in the movies. It is an expansive campus of rock walled buildings without the fortified log walls fencing it in. There had been some shallow trenching done for protection but, back in the day, as you rode up on Fort Belknap, it would have been like riding up on any other small town or Indian Agency. 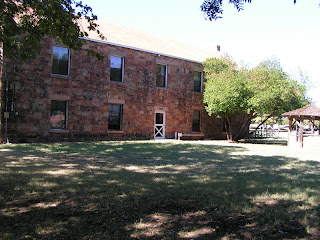 Today, although the Fort has been made into a State Park, there are private homes which have been built literally right up to the borders of the Fort. As we walked around, there were folks washing cars and mowing their lawns as though the Fort was just another “green belt” within a housing development. 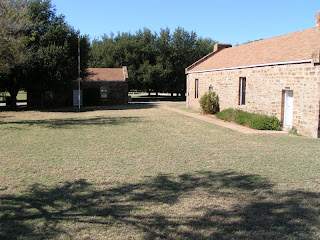 We entered what had been the Fort’s Headquarters building which is now the Fort Museum. Although the Fort had been established in 1851, it was abandoned at the outbreak of the Civil War (TWONA) and briefly used as a base of operations for the Confederate Texas Frontier troops to keep a lid on the Indians and hold back the North from invading the South through North Texas. It was taken back over by Federal troops at the end of the Civil War but abandoned for good in 1867.
The museum is an ecclectic collection of memorabilia from the Fort’s past as well as a collection of tools, personal items and news articles of the period donated by former residents and the memories of others from all over Texas. Most of this stuff is laid out in glass cases and really needs to be digitized or better cared for before the paper and cloth turns to historic dust. 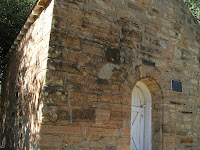 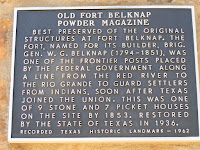 I was reminded that the Fort structures I was seeing had mostly been rebuilt and very little of the original construction is visible. After their abandonment, locals began dismantling the buildings to use the materials in other buildings throughout the area. Luckily, for the Texas Centennial celebrations in 1936, the State reconstructed most of the buildings to their original design but with new materials. The only original building is the Ammunition Magazine which is now used as a church. As the museum staff told us, most of the other buildings are only original from the bottom of the windows to the foundations. 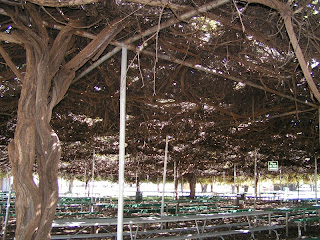 The other interesting structure is the grape arbor. This expansive natural “patio cover”  shelters a huge picnic area from the intense Texas sun. It was planted in the 1940s and has grown continuously since. The staff said they don’t even water it. It grows from several thick grape vines and only sees water when it rains. 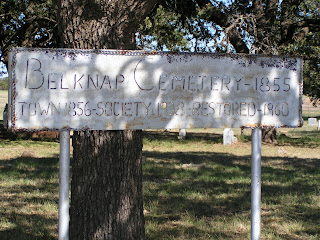 The Fort also has the obligatory old west cemetery about half a mile east of the Fort. Established in 1855, the cemetery has plots dating back to the early Republic, Civil War and even some fairly new internments. A short drive through a cattle ranch (always lock gates behind you, Code of the West ) we arrived at the cemetery in view of some resting beef up against the back fence. 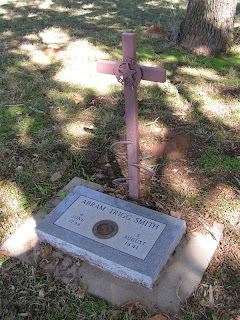 Every now and then in Texas, you come across a Texas Ranger grave. All Texas Rangers get a special monument when they pass away and Private Smith got his.
On August 5, 1841, Texas Ranger Private Abram Trig Smith, a member of Captain Eli Chandler's Robertson County Rangers, came upon a party of either Cherokee or Kickapoo, who opened fire at close range from atop a rock cliff, killing Private Smith. Other Rangers were able to beat off the attack and the attackers melted back into the woods. Whenever a suspected fallen Ranger burial site is located, decendants of the Ranger apply to the Texas Historical Commission and the Former Texas Rangers Association who provided the memorial cross for Private Smith in 2005. 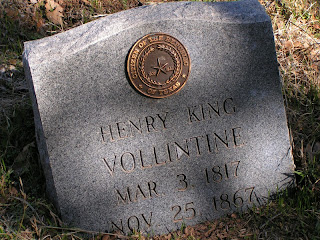 Other graves sites included a couple designated as historic with the Republic of Texas badge affixed to them. This signifies a deceased person who lived in Texas when it was an independent nation (1836 to 1846). There were several sections which were dedicated family plots of families which have been in the area since the fort was established in 1851.
The Graham/Belknap area is very scenic and rustic. Like many parts of Texas, it has a certain rugged beauty that's hard to quantify. The rolling hills and winding back roads allow you to suppose what it may have been like for the early settlers to be out here, building up their farms or ranches, trying to scratch out a living, dodging marauding Indians and putting food on their family's table. Except for the occasional modern home, cars and concrete roadways, it's pretty much unchanged from those early days of no refridgeration or air conditioning. How did they do it?
So having worn out the bottom of our shoes walking the Fort Belknap State Park, we booted up Patty and after a quick stop for our Sonic RT 44 Strawberry Limades (light ice) we headed for home.
Posted by Nick Saraceni at 8:51 PM