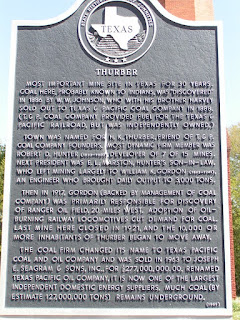 On a beautiful Saturday, while waiting for the satellite to fall from the sky, we embarked on our adventure to Thurber, Texas. Thurber was a true “company town” back in the late 1800s. No one else was able to call Thurber home except miners, brick makers, shopkeepers, teachers and a couple of preachers who served at the pleasure of the owners of the Texas and Pacific Coal and Oil Company. Thurber always had labor troubles, which didn’t necessarily go away in 1903 when the United Mine Workers Union were voted in. But it then became the first all-Union “closed shop” town in America. If you weren’t a Union member, you didn’t work in Thurber. 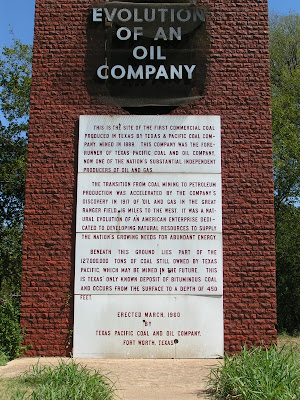 Located in Erath (pronounced “E-rath”) County about 75 miles west of Fort Worth, Thurber (now Mingus, Texas) lies right along the I-20 in the rolling green hills which belie the desolation of the West Texas to come. Established in 1886, at its peak in 1920, it held about 8,000-10,000 people in what was a virtual melting pot of various Europeans mostly Italians, Poles and a smattering of 18 different nationalities. They were experienced tradesmen in the art of extracting first coal then shale for brick making. Thurber was one of the largest deposits of bituminous coal in Texas and the workers were attracted and mostly recruited by management for their skills, the higher pay and a chance to join in the great American experiment.
To their credit, those groups left their indelible mark on America (and Texas) with their culture by way of their religion, food and some of the games they played. Still today, in a park adjacent to the W. K. Gordon Center for Industrial History of Texas you can see two Bocce (pronounced “Bachee”) courts where Thurber descendents still meet to play a little Bocce Ball. Bocce (the plural of the Italian word boccia, which means, "bowl") is the great-grandfather of modern Lawn Bowling originally played on natural ground courts by the early Romans. The word “bowling” refers to the uneven shape of the balls. Unlike lawn bowls, bocce balls are spherical and have no inbuilt bias. Because the Romans took the game throughout the Empire, the game spread throughout Europe and has crossed the oceans to places like Australia and South America.
Thurber was a pretty amazing place for its time. Thurber was built by the Johnson Coal Company that was later bought out by the Texas and Pacific Coal Company in 1888. Its mining operation provided the fuel for the then prevalent coal-burning locomotives of numerous railroads, including the Santa Fe, the Southern Pacific, the Texas & Pacific and the "Katy" (Missouri, Kansas and Texas Railroad). Probably as a marketing ploy to keep the railroad business, the town was named by the company for a major stockholder of the Texas and Pacific Railroad, H.K. Thurber.
Thurber was pretty amazing for its time in that it was, because of its self sustaining power generation ability (remember all that coal?) the first all-electric powered city in America and soon after natural gas was being piped from the coal shale, it became the only city with piped in gas for cooking and heating in every home and business.


The residents of Thurber were admittedly very restricted in how they could live but it didn’t seem to bother anybody much. Except for a couple of strikes by the early unions, the occupants had a pretty good life. There was little crime and, for its time in the “wild west”, was extremely safe and peaceful. The Texas and Pacific Coal (and subsequently Oil) Company tried to keep the captives happy by bringing in just about all the comforts or services a citizen could want. Every worker could rent a “Company” house and it was well known that the residents of Thurber could buy any number of foods, clothing and dry goods from the huge Company Stores from beans to fur coats. They had even dug, filled and stocked the man made “Big Lake” to fish and swim in.
Thurber had a very ornate 650-seat opera house, which drew in top acts from all over the world including Broadway plays, musicals and world-class opera singers. Because the railroad came by Thurber, it was often the host of a traveling circus came every summer. They had one of the largest ice houses built in Texas up to that time and residents worshiped at company churches, learned at company schools and drank at company saloons. 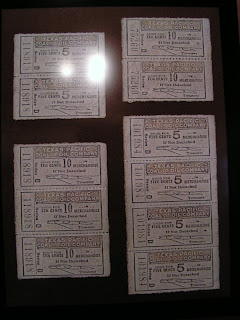 But let’s face it, you “owed your soul to the Company Store” ("Sixteen Tons" is a song about the life of a coal miner, first recorded in 1946 by American country singer Merle Travis a 1955 version recorded by Tennessee Ernie Ford reached number one) was not just a lyric in a song, these folks were virtual prisoners and didn’t even have real money to spend. The Company issued “script” to all the workers who could only spend it at the various Company stores. Not my idea of paradise. 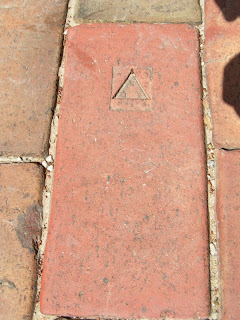 When the railroads didn’t need the coal it was heavy Thurber paving bricks that paid the bills. Thurber bricks were universally used throughout much of Texas and can still be seen with their distinctive triangle logo in the streets of Austin, in major buildings, which still exist in Fort Worth and Dallas as well as Seawall Boulevard in Galveston. At its peak, Thurber produced a reported 80,000 bricks daily.
Thurber came to an end in 1936. It was its own executioner in a way. The arrival of the oil boom, which the Company kicked off with its Ranger Oil field discovery, killed it. Suddenly it was more efficient to fuel trains with oil rather than with coal. Oil-based asphalt replaced brick for road construction. The mines and brick factory closed and Thurber’s residents scattered in search of new work. The Company made a business decision to end operations in Thurber. Most of the town was razed. The frame houses were either disassembled and the lumber sold or homes were sold and carted away for $40 each to anyone willing to haul them away. The town became a ghost town almost overnight. 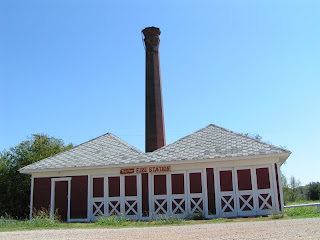 There are still a couple of original buildings left. The firehouse is still there as well as the huge brick smokestack, which was built to be part of the power plant, towers over the landscape, and continues to be a highly visible landmark off the I-20. There is also the “SmokeStack” Restaurant, which resides in the old General Store building. This is the SmokeStack Restaurant's second location. Once in the old company Drug Store building just east of the General Store, it was consumed by fire in 1992 and the owner, Andrea and Randy Bennett moved the operation to the General Store. Randy passed away in 2000 and Andrea and her son continue to operate the restaurant. Andrea still lives in the former company doctor’s home and her son lives in the old manager’s home. They are the only Thurber residents occupying the town. 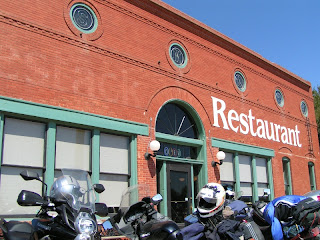 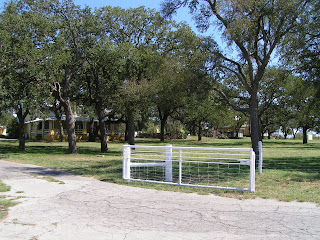 The other gem left in Thurber is the cemetery on the hill overlooking the old town. It has over 1000 gravesites and many with custom brick or metal enclosures. It is a Texas State Historical monument and has security cameras at the entrance to upload vehicle photos and license plates as they enter and leave. It was put in after a serious vandalism occurred a couple of years back. The Thurber Cemetery Association had restored the cemetery, which straddles both the Palo Pinto and Erath County lines, in 1990. Soon afterwards, with the use of ground penetrating radar, they identified 758 people buried in unmarked graves and commissioned a monument maker to make two-stone monuments, etched with these names. Among other damage to gravesites, both those monuments were toppled and shattered. 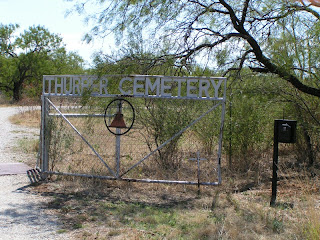 The cemetery also contains a large number of graves of children who died before the age of two. Death certificates of the era state causes of death as either "natural causes" or common childhood illnesses. Nobody is sure but there are suggestions that the causes may have been the flu epidemics during the early 1900s and Tuberculosis which was very prevalent in Europe and some of the children may have acquired it from their parents. The cemetery is considered haunted and some visitors report seeing little children walking around the cemetery or seeing images of them in their photos of the gravesites. We had no experiences like that but what a rich source of history and display of the burial practices of the eastern Europeans who were there. 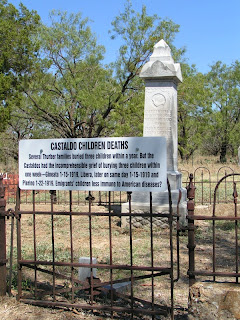 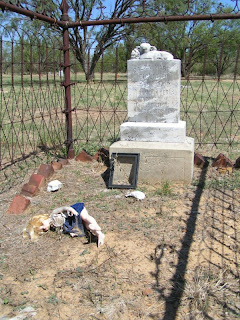 If you have any questions about Thurber or the history of the region, just drive under the overpass and visit the W. K. Gordon Center for Industrial History of Texas, a research facility of Tarleton State University (Go Riders, Bleed Purple!) part of the Texas A&M University System. William Knox Gordon, a native of Virginia, was hired by the Texas and Pacific Coal Company in 1889 as a civil and mining engineer. He was instrumental in expanding the company’s operations into brick building and convincing the company to explore for gas and oil in a place just further west, called Ranger, Texas. Gordon used his knowledge of both geology and the local terrain to convince the company there was oil in West Texas and with a $20,000.00 investment (wouldn’t you want to have been in on that deal), McCleskey No. 1 “blew in” in 1917 and the Ranger Oil Field began a long and prosperous oil boom in West Texas. 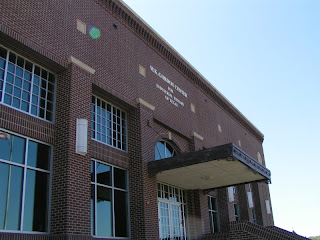 An interesting by-product of the sudden Texas oil wealth had its origins in 1839, when the Texas Republic Congress set aside 50 leagues (221,400 acres) of land for the endowment of a university. Of course, the Legislature wasn’t going to put up really good land so, as politicians do; they secured some really poor land in arid West Texas. What goes around comes around and, guess what, the arid West Texas land ended up to be right on top of some of the biggest oil deposits in the state known as the West Texas Permian Basin.
The Santa Rita No. 1, discovery well of the Big Lake Field, blew in on May 28, 1923, in Reagan County. It was drilled on University Lands. So much money was coming in, that in 1931, the legislature split the net income of the Permanent University Fund, with two-thirds going to the University of Texas (Hook’em Horns!) and one-third to Texas A&M University (Go Aggies!). The Permanent University Fund, which receives all revenue from oil, gas, sulfur and water royalties; increases in investments; rent payments on mineral leases; and sales of university lands, is one of the largest university endowments in the world. 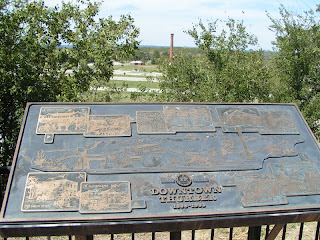 It is a little eerie when you stand on the bluff of the New York Hill Restaurant (New York Hill was the name given to the neighborhood for the white-collar clerks and brick-counters that the company recruited from the East Coast....yeah, probably not segregation) and take in the land below and realize that there once was a thriving community, which used to be where several thousand people lived and worked. It’s hard to imagine a town completely removed from the landscape where those who called it home can’t even return to their place of birth, sit in a park they played in or attended school. Like the hand of a tsunami washed away the place and replaced it with trees and grass as it receded. Next time you find yourself in West Texas looking for a place to rest yourself and grab a bite to eat, just look for the Smoke Stack, jump off at the TX-180 and check it out.
Posted by Nick Saraceni at 9:32 PM