I have been "retired" now for about 6 years. In a misguided attempt to "move forward" (I use quotes when I'm trying to be politically correct so you think I really believe the crap I'm spouting) and transition from cop to civilian, I made a conscious decision to let my CCW (Carrying a Concealed Weapon) credentials expire from California. I figured I'd be so involved with my "retired" lifestyle, I wouldn't need to carry concealed or bother with the re-quals to keep it current. Boy was I wrong.

Realizing that Texas has one of the most liberal (hard term to use in a Red state like this) concealed carry laws around, everybody here carries a gun. Although it's still not unheard of (and quite common) to see "open" carry anywhere outside the major cities, Texas still demands a Concealed Handgun License (CHL) to carry concealed.

I pride myself in keeping up with the news (live and Internet) regularly and could not help but notice the increase in violent crime Nationally as well as an uptick in and around the DFW area where I live. As many of you may know, I usually take the wife out into the hinterlands of Texas and Oklahoma on weekends and some of those places I have to characterize as "the middle of nowhere" where if something bad happened, we might never be found, think the more remote locales in Deliverance (yeah, you know, the ones with lots of banjo playing in the background).

So, after a bit of deliberation, I decided to get my credentials up-to-date with my old employer and, on a whim, decided to take a concealed handgun course to get current on the laws in Texas. Because I'm a cheap bastard, I waited until I got a deal. Most courses in the DFW area were north of $100 dollars. I subscribe to LivingSocial and they had a 1/2 off deal ($49) through Dallas Concealed Carry. I registered and paid the fee and was directed to the website Texas Department of Public Safety (I don't think there's a Private Safety) where I learned that getting a license is a very expensive proposition. 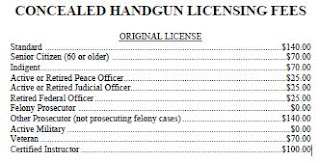 I figured I would have qualified as a "retired Peace Officer", but oh...no, that's only retired Texas Peace Officers. Heck even the Feds get a discount. I can't be sure but I'm convinced its part of a grander "anti-California" sentiment agenda among Texans. So I ponied up my $140 and figured I was done. Nope, there is the $10 dollar fee to get your fingerprints scanned electronically by the sole-source provider, L-1 Enrollment Services . Oh, and then there was the need to get two passport quality photos to send in with the application, another $10 bucks at the CVS photo center. After reviewing the Dallas Concealed Carry website, I learned the DCC doesn't have their own range. The shooting range where the class was being held, Texas Handgun Academy was going to charge us another $20 dollars (had to be cash too) to use the range for the qualification phase.

So now armed with my application and now $229.00 lighter in my wallet, I got up early Saturday morning and drove to Plano, Texas . I say early because the State requires a 10 hour course including at least one hour of range time. Class started promptly at 9 am and with a break or lunch, ended at 7:30 pm. A long day of sitting for lectures by our instructors and watching DVD videos on shooting techniques and situational awareness scenarios from a couple of different shooting academies.

I get to class and am ushered in to a small airless classroom with whitewashed plywood walls. This facility is in a strip mall store front just off the LBJ Freeway (US 635). Somebody decided to stuff four classrooms and an eight lane gun range into a place which should have been a sandwich shop. I then learn our instructors failed to cut off the registrations in time and a class of thirty became a class of fifty. The room itself was sparse. Just a dry-erase whiteboard and a big screen TV for the DVDs. It had a low ceiling which I'm sure violated code and some very creative use of drywall. Very low-budget.

Our instructors were Daniel and Teresa. Both armed to the teeth. Daniel did the introduction and demonstrated that he himself had three handguns and a Taser on him (in a cross draw holster) and a briefcase full of other handguns. Seriously, nobody was getting by Daniel.

It was interesting to note that Texas has the third (come on, you thought I was going to say first, didn't you) most number of concealed carry licenses in America (525,000). Florida is first with 900,000 (that means, if you're standing in line for your morning latte', there's probably two armed persons standing in line with you) and Pennsylvania has 630,000. California has only 36,000. Heck, little ol' Massachusetts has 225,000! Illinois has no CHL provision. Not surprisingly, they have the highest crime rate in the nation.

Alaska does not require a permit for any law-abiding individual to carry a handgun, either openly or concealed, within the state's borders (what a great place).

Many have "Opt-Out" statutes (Texas is one of them) known as "gun-free zones" so businesses, schools, hospitals, and public gatherings can post a sign prohibiting carrying within their premises. The sign must look like this and use the EXACT language (oh, yeah, it also has to be in Spanish) or it isn't legal. 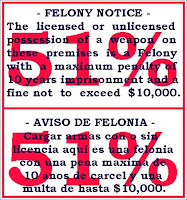 The business must be savvy enough to post the sign but if not, the CHL licensee just has to "know" this information prior to entering. So, hypothetically, you could walk into a Chili's restaurant and if it makes more than 51% of it's revenue from the bar, you could be screwed but if they don't have a sign, it's a defense. Yep, has to be in Spanish too.

The State has had a "shall issue" policy since 1995. If you pass the test, pass the State DPS background, and pass the accuracy qual shoot (175 out of 250), you get a license.

Really funny was the fact that we had a very diverse group of folks there (kind of like Wal Mart on a typical Saturday) and several of them (remember why we were there) had forgotten to bring ammunition. We had young adults to Seniors. One very dignified Senior woman actually began nodding off during the 8th hour and Daniel went over to check if she was alive. She brought the cutest .38 Chief's Special with her. Daniel had to take her aside to help her figure out how to open the cylinder to load it after a demonstration of the difference between semi-automatic ammunition and revolver rounds.

They even had a raffle in which the youngest member of our class, a 20 something college student, won a Glock Model 36 in .45 cal. Only cost her the price of a ticket, $20.00. She scored. Then there was Daniel taking her aside to show her how to load and fire the monster. She had only showed up with a little .380 ACP for her purse. Can you imagine her drawing that monster out in the parking lot of the Club? 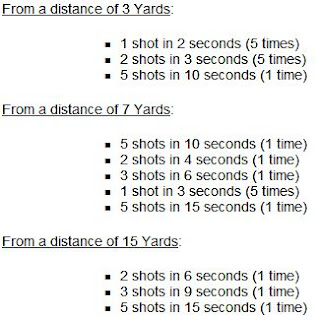 Of course, there are the little caveats like, have to be 21, no felony "convictions" (yes, you can carry if you've been charged until the Jury comes back), and (I love these), must not be incapable of making a "sound" judgement (what's your definition of "sound"), can not be delinquent on your child support, and absolutely not if you owe the State taxes or fines.

By law you can't carry in certain places like school buildings (OK, I get that), or any event sponsored by a school or any school vehicle. You can't carry in a Polling place, any government court (including the Feds), a racetrack (weird), not within a "secure" area in an airport (I imagine the TSA might have something to say about that) and my favorite, within 1000 ft of an execution. Yeah, sure, let the executioners have all the fun.

You're a bad CHL holder if you "intentionally" fail to carry concealed, show up to any sporting event, walk into a correctional facility, or God forbid, you're intoxicated (using the State .08 standard). And you can't walk onto somebodies private property if they've posted it or verbally advise you to leave. The latter will probably get you shot by the gun toting land owner.

The two really humorous subjects covered was the medical brief on what to do if you get shot. There were lots of suggestions as to how to act if you get shot (calmly so that others will remain calm too, like that's going to happen) and what types of supplies you should have on-hand to treat gunshot wounds. Even as far as recommending keeping a hunters first aid kit in your home and car for such emergencies.

The second was really riveting, "Verbal Conflict Resolution". Yeah, the State wanted us to be able to do a little "verbal Judo" with our assailant(s) prior to having to shoot them. Though thought provoking and certainly prescient on the part of our legislators, I couldn't stop from laughing.

In the cop world, the concealed carry class was equivalent to a "Street Survival" course most of us took while we were cops. Most would agree that a course like that always made you a little more aware (i.e. read "paranoid") and most of us left there carrying more powerful guns, more ammunition and so many "back-ups", you didn't have room for your keys and wallet. When you finished up a class, you started making excuses to go to a bank or the 7-11 hoping some fool would try to rob the place while you were there.

Daniel was very forthcoming about his concealed carry experiences as well. By the time he got to his fourth story (which, interestingly, usually involved a late night trip to Wal Mart) you understood why this guy was so passionate about carrying concealed. He's had more armed confrontations than a season's worth of "Southland". He was also very anti-gun control. He actively solicited us to challenge, whenever possible, any new gun regulations or movements to deny us our God-given 2nd amendment rights. He and his CHL attorney wife have actually testified at the Texas State Legislature to defeat what they determined to be anti-gun legislation. These folks were serious about the erosion of our rights to carry and possess weapons and wore it proudly on their sleeves for everyone to see.

That following Monday, to complete my CHL application, I sought out a location for L-1 Enrollment Services. To my surprise, there was one right here in Frisco. It turned out to be in, of all places, a Sylvan Learning Center. It turns out the Sylvan staff double as fingerprint scanners when they're not tending to the education of the youth they contract with. Although kind of funny, I was informed it was a great secondary revenue stream providing the store with a steady income during the day when the kids were normally in school and more hours for the staff. Crazy, huh? 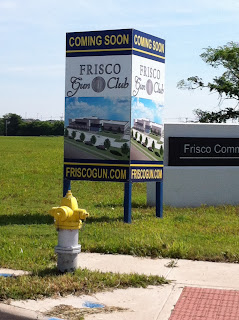 After sending off my application, I got more good news, Frank. The City of Frisco just announced a new shooting center literally 5 blocks from my house. The Frisco Gun Club which is an expansion of the Dallas DFW Gun Range. It's going to be state-of-the-art and is advertised as the largest facility like it in the United States. Awesome. 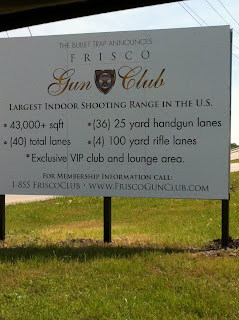 Posted by Nick Saraceni at 3:12 PM