It has been a awhile since we had gone on one of our weekend hops. The last try was an attempt to view a Civil War reenactment in Grandview, Texas at a place called Beaumont Ranch sponsored in part by the Civil War Center of Texas. Beaumont Ranch is a large recreation area where you can do everything from zip-lining to off-road driving to weddings. The reenactment is the biggest in North Texas and features the 13th Texas Cavalry which is a huge bunch of Civil War (sorry, TWONA) history buffs who get out in period garb and weapons and educate the public and have some fun.

I only tell you this because on the weekend we were to attend (I got tickets and everything) it rained cats and dogs and we turned around when the windshield wipers could no longer keep up. I posted this on Facebook and got many hoots and put-downs for being such a whus. Yes, but lets not forget I had the little woman with me and there was no way she was going to stand out in the rain, in the mud, to watch a bunch of crazies run up and down hills shooting at each other. Heck, we could do that at home with the history channel with the refrigerator within easy walking distance. So it was with a heavy heart we returned to civilization.

So the following weekend, I had completed all my yard maintenance tasks ( it is an early Spring in Texas) and had a serious craving for war planes. I had been meaning to get to the many aviation museums in the greater Metroplex and decided this was the weekend. The closest was at the Addison Airport in North Dallas. 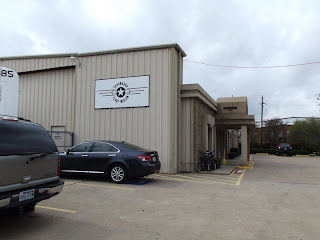 The Cavanaugh Museum is no Smithsonian Air and Space Museum but it does have a respectful number of well cared for aircraft. Just about all of them are ready to fly and they have a schedule of times you can buy a ride on one of them. I was somewhat disappointed in that their "crown jewel" planes, a B-29 named Fifi and a P-51D named the Brat III. They often travel to airshows all over the country and that week they were in  Ft Lauderdale, Florida.


But the museum has a full complement of other warbirds many of my favorites like the B-25 Mitchell, a B-24 Liberator they're rebuilding and several jets from the 50's, 60's and 70's. And, of course, a bunch of helicopters.


I took a trip down memory lane when I came across an old Bell OH-13D Sioux or the civilian Bell 47 in one of the hangars. I did my basic helicopter training when I was at the Sheriff's Office Aviation Unit (ASTREA). It brought back memories of my days of jostling poor CFI Archie Trott around the Whiskey pattern at Gillespie Field, doing approach after approach to points all over Sycamore Canyon, Proctor Valley and scaring myself over and over again when I was building time toward my Commercial rating.


The other little gem was the Bell UH1 sitting rusting outside on the tarmac. This B/C model was an early Navy version which became the E/L Model I flew at ASTREA. The Navy needed Hueys to support the riverine operations on the Mekong Delta and the Navy Seals during the Vietnam War.


They initially borrowed Army Hueys and subsequently had Bell swap out the main rotor head of the Bell Huey Cobra with it's "diving board" main rotor blades to give it extra lift in the hot steamy marshes of the south. These Navy forces were known as Helicopter Attack (LIGHT) Squadron Three (HA(L)3) called the  "Seawolves". From April 1966 to their decommissioning in March 1972, they flew approximately 120,000 combat missions and is the most decorated Navy Squadron in the Navy's history.

Being a aviation junkie, I am always intrigued with the idea of refurbishing an old war plane and then flying it. Like all those car buffs that spend years meticulously disassembling, reworking, repainting and redoing interiors until they get it looking factory fresh right off the assembly line. It takes serious money to make that a reality but especially with antique aircraft. Military aircraft, especially during wartime, were never intended to last more than a few years. The engineers were just told to design an aircraft that a 20 something could fly and a 19 year old could easily service. In a time where money was no object, nobody cared if engines and other mechanical parts got used up. American manufacturing was on a wartime footing and produced engines and mechanical parts by the train load. If it broke, you just replaced it.


Today, finding parts for some of these aircraft is getting harder and harder. Many times, parts have to be made from scratch using the original blue prints. That makes it that much more expensive and difficult for individuals and even museums to afford to keep these beauties flying and on display. My hat is off to the Cavanaugh Flight Museum for keeping these beautiful planes alive for old dogs to stare at and new generations to admire and see fly.
Posted by Nick Saraceni at 9:22 PM