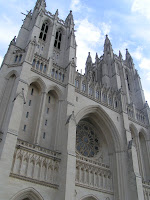 Ok...I must report on a new adventure in the nations capitol. It wasn't my fault, I was forced to attend another meeting with our grant partners CNA in Alexandria, Virginia. CNA is the TTA (Training and Technical Assistance) provider for our Smart Policing Initiative  grant.They organized a meeting and one-day conference as a replacement site audit by the US DOJ and their Bureau of Justice Assistance (BJA) to do a first year assessment of our activities on our two-year grant.

They normally would have come to us in Frisco except after the $16 dollar muffin fiasco earlier this year, Congress cut off DOJs travel budget and they were forced to have the grantees (that would be us) come to them. Oh, well...road trip!

The conference meeting went according to plan...you know, lots of Power Point presentations and suspiciously similar paper handouts to follow. But the DOJ audit meeting would be a little different. The "team" consisted of our Department Grant Administrator, Tonia, researcher, Dr. John of UTD (Go Horns), and I matched against two members of BJA. We were supposed to bring our SPI officer Chad but he had prescheduled a church mission to apply paint to a church in Honduras during that same week. Really, I'm not kidding.

Tonia had decided to bring the site to them so we made a 5 minute video presentation and a slew of handouts to present our case. All told the video was a hit and we got recognition for being the only site to have a "Presentation" for the audit team to watch. Cudos all around.

Having lived through that, we had built in an afternoon of sightseeing on our last full day. Tonia picked the National Cathedral and I picked (of course) the Newseum on Pennsylvania Ave. I must say, I wish I had thought of the National Cathedral on our May trip, we could have spent all day there. It's on the list for next time.

The neogothic cathedral, actually the Cathedral Church of Saint Peter and Saint Paul, was conceived by the seven Episcopal Bishops of DC after a charter was passed by Congress in 1893. Religion has always been a part of the American experience since the founding of America. So much so that three days before George Washington took the oath of office as the first president of the United States, Congress passed the following resolution:

Resolved, That after the oath shall have been administered to the President, he, attended by the Vice President and members of the Senate and House of Representatives, shall proceed to St. Paul’s Chapel (in New York City) , to hear divine service. (Annals of Congress, Vol. 1, p. 25, April 27, 1789). Once the National Cathedral was built, many of those inaugural prayer sessions have taken place at the National Cathedral.

Although Congress felt America needed a "National House of Prayer", the cathedral is wholly owned and operated by the Episcopal Church and has no connection with the federal government (that would be illegal). In the past, they have accepted grants and funding for special projects.

Started in September 29, 1907, with the laying of the corner stone by President Teddy Roosevelt, it wasn't completed until September 29, 1990 under President H.W. Bush (#41), a total of 83 years. "Completed" is not the right word in that the designers and worshipers had always maintained that the church will constantly evolve over time and never be finished.

Fourteen Presidents have had their funerals there, from McKinley in 1901 to Gerald Ford in 2007. But only one, Woodrow Wilson is buried there. The only other notable persons buried within the church are Helen Keller and her two companions, Anne Sullivan and Polly Thompson.

There are so many beautiful things within it's walls, there is no way I can describe them all or at length. Your eyes would roll back and I'd never get you to read my blog again. So I'll just hit the high points I saw.

The main Nave (the main floor of a church) is flanked on both sides by "bays". Each bay is dedicated to something in American history or experience. There are bays to the military, the Presidents, the wars and important events in history. One of these is where President Wilson is buried. His is typical of the theme bays. On the front is a record of his accomplishments. The symbols in front are his home state of New Jersey, his Presidency and his Presidency of Princeton University. The window is titled "War and Peace" for his term as President during WWI and his efforts at starting the United Nations. 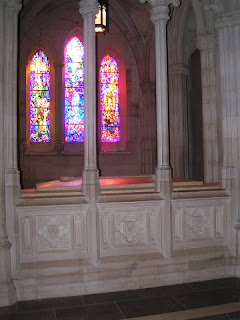 Over the years, the cathedral was built one bay at a time from front to back. Our tour guide, a wonderful quiet spoken lady senior, recalls joining the choir in 1923 and watching the progress of construction as the church grew in proportions over the years she's attended there.The sides of the church contain upper and lower stained glass windows towering over the Nave. Many are depictions of religious events as well as the stations of the cross. Each with it's own message rise up to 35 feet tall. 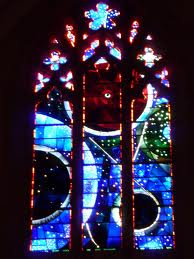 In honor of the Apollo 11 flight and landing on the moon, there is a stained glass window that houses a piece of moon rock known as the "Space Window." It was donated by Dr. Thomas O. Paine, NASA's administrator during the Apollo 11 mission, and designed by St. Louis artist Rodney Winfield.Whirling stars and orbiting planets are depicted in orange, red and white on a deep blue and green field. The moon rock is in the center of a red ball representing the Moon, which is now encased in an air-tight, nitrogen-filled capsule in the window. The moon rock is a basalt, probably from a lava flow.


There's one to Lewis and Clark (nope, not Sacagawea), Robert E. Lee and Stonewall Jackson. Suffice to say, photos cannot do them justice. You have to see them for yourself. An added bonus is by looking down the sides of the Cathedral. Because each bay's window is a different theme and color, looking down the bays from the front or back of the church, each bay reflects it's predominent color onto the upper reaches of the ceilings creating a rainbow effect of soft blues, greens, yellows and pinks. Again, my photos cannot express the beauty of the interior or the magnificent stained glass windows of the church.

It's made harder by the hanging of a mesh across the entire ceiling which partially obscures the upper windows. Recall that in 2011, an earthquake struck the DC and surrounding area which not only damaged memorials in DC proper but also causing some decorative features like the National Cathedral spires to fall to the grounds below. Although still structurally sound, some of the joint mortar broke loose and fell so the mesh remains until the joints can be inspected and filled. 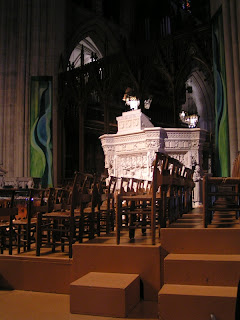 The pulpit was carved out of stones from Canterbury Cathedral. The high altar, The Jerusalem Altar, is made from stones quarried at Solomon's Quarry near Jerusalem, reputedly where the stones for Solomon's Temple were quarried. In the floor directly in front of that altar are set ten stones from the Chapel of Moses on Mount Sinai, representing the Ten Commandments as a foundation for the Jerusalem Altar.The carved stone screen (or Reredos ) behind the altar, called the Ter Sanctus (Thrice Holy) Reredos is, except for the central image of Jesus Christ, carved from limestone quarried at Caen, in Normandy, France. 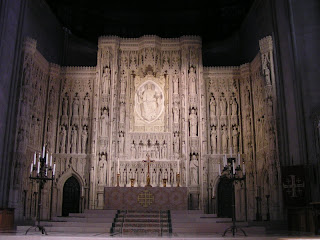 By the time they got to doing the central piece of Jesus, they ran out of the special French quarried stone so Texas came to the rescue and the central image of Jesus is carved in a brighter, yellow-er Texas limestone. Surrounding the altar are the figures of 110 men and women in various poses. Recall that all this was hand carved on special stones....no pressure for the carvers, there were no "do-overs" if they messed up. 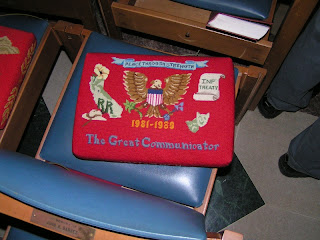 Kneeling pillows are hand sewn by church members depicting historic events and famous people. All activities from flower arrangers, to bell ringers and tour guides are volunteers who work tirelessly to maintain the church for parishoners, tourists and guests. 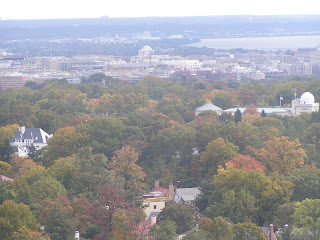 The cathedral happens to be the highest point in DC (central tower is 301 feet) and taking the elevator to the 7th floor Pilgrim Observation Gallery gets you a panaramic view of the entire DC area all the way to Virginia and Maryland. It overlooks the U.S. Naval Observatory where the Vice-President lives, that's Joe's house at the far left of the photo.

My photos cannot reflect the scale of the place either, check out the stats: 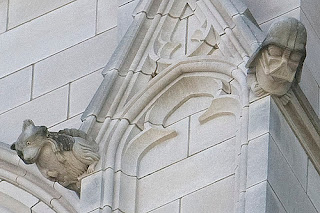 The recurring theme of the Cathedral is that it mirrors American values and culture. As an example, in the 1980s, while the west towers were under construction, Washington National Cathedral held a decorative sculpture competition for children. Word of the competition was spread nationwide through National Geographic World Magazine. The third-place winner was Christopher Rader, with his drawing of that fearful villain, Darth Vader and placed high upon the northwest tower of the Cathedral. What's more American than a Star Wars figure decorating a National Place of Worship?  Really cool place, put it on your list if you ever get there.
Posted by Nick Saraceni at 9:34 PM