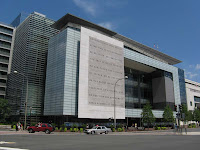 After being bowled over by the grandeur of the National Cathedral, we got into the rental and made our way across town to Pennsylvania Ave. and the Newseum. We had to scurry over because; little known fact, just about every Federal Building and museum closes at 5 p.m. It was already a little before two when we got in the area and pulled into a public parking garage on 7th and E streets.

Unfortunately, neither my colleague Tonia nor I had eaten since our breakfast at the Mark Center Hilton. It may be a Texas thing, but Tonia has neither a passion for or interest in eating Mexican or bar-b-que. As we walked from the car garage those seemed to be the only offerings within view. We turned up 7th toward F Street. On the east side, we caught a sign for Carmines Italian Family Style  dining.

With the lunch hour long gone, we had the place to ourselves as we were seated (when I Googled the place, I found a photo of President Obama preparing to dine in the same section we were at). We turned to the menu, which had a great selection of traditional Italian fare ala Buca De Beppo. Problem was, like Buca, it was large portion family style. We were mobile and didn’t have any place to put the doggie bags but our server reported we were within the last 15 minutes of the lunch menu and could get anything they had in lunch portions. We both decided to get the spaghetti and meatballs for two.

After deciding to go to the National Cathedral, that was the second best decision we had made that day. The platter that came out had a more than ample supply of spaghetti with a sweet and rich tomato sauce topped with the densest meatballs I’ve had in a long time. The meatballs were a combination of beef, lamb and pork. I assured Tonia this would not be a “Lady and the Tramp” moment and we would most likely be sharing that third meatball. Wow!

Ridiculously full (no we did not do dessert); with time passing us by, we quickly walked the three blocks to the Newseum right on Pennsylvania Avenue. Just down the street from the Capitol Dome and next door to the Canadian Embassy, the Newseum is a depository of the history of newsgathering from the earliest days of our country. 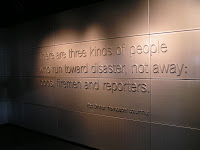 The Newseum is sponsored by most of the major news outlets; ABC, Cox, News Corp, Hearst and Bloomberg are founding members and big time contributors. The Newseum’s mission is to educate the public about the value of a free press in a free society and telling the stories of the world's important events in unique and engaging ways.


We had less than two hours to rush through the six floors of the museum so the thoughtful folks at the Newseum put together a two-hour “highlight”  tour to hit the high points if you’re short on time. But, you miss out on the four theatre experiences on media bias, the press and Hollywood, the First Amendment, the press and the civil rights movement. 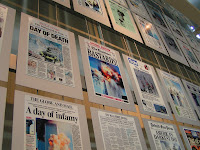 The Newseum takes pride in the ever-changing exhibits and displays (like the industry and history). What was very surprising to me was the amount of physical items on display from major world events specifically the events of 9/11. There were personal stories of many of the big name and not so big name reporters relating their experiences and especially photos of that time. There is even the mangled piece of antenna mast that stood atop the North Tower of the World Trade Center alongside huge copies of 127 newspaper headlines taken from the following day. 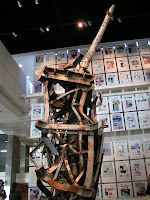 There is an eight-piece section of the Berlin Wall you can walk up to and touch. There was a section dedicated to the press and the FBI where they have some artifacts from the Hoover days and parts of two jet engines that were recovered from the World Trade Center dig. The shoes the Richard Reid, the Shoe Bomber, tried to set off onboard that Christmas 2001 Northwest flight. One of the 300 guns recovered from the Branch Dividian Compund in Waco. They even have the cabin where Unabomber Ted Kaczynski lived and was captured in rural Montana. 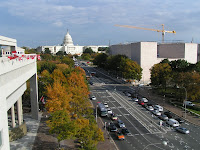 While on the sixth floor, you can walk out onto the outdoor terrace for a grand view of the Capitol Building and most of Pennsylvania Ave where the Inaugural Parade happens when the Presidents walk (or drive) their way back to the White House every four years. 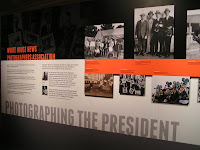 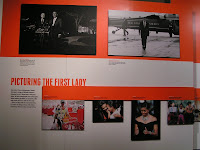 I have to say, beside the 9/11 displays, my favorite part was the section which had examples of all the Pulitzer Prize journalistic photos and an exhibit of Presidential photographers.

There was a section dedicated to President Obama’s official photographer, Pete Souza. There was a particularly moving behind-the-scenes shot of the President in a not so private moment with his wife back stage at the Inaugural Ball in 2009. The First Lady stands in front of the President wearing his coat with her formal gown tucked, in warding off the cold. 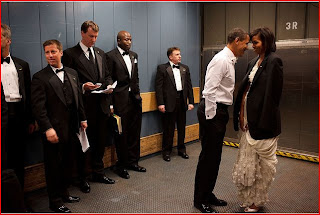 Although we ran through the place, I came away with a deep appreciation for how the news industry does their job. They are the people we love to hate and rarely are glad to see because their presence usually means bad things are happening. But, if you believe in Democracy and all that entails, you must appreciate that a true Democracy cannot survive without a free press to give meaning to the word “transparency” and hold everyone, especially governments; accountable to the people they affect every day.
Posted by Nick Saraceni at 1:07 PM