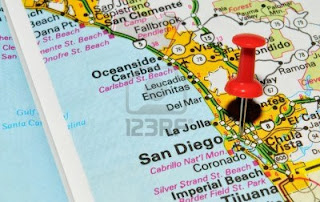 As Thomas Wolfe said, "...you can't go home again"  (or more poignantly, "you're always 17 in your home town", thanks Cross Canadian Ragweed 2002).  Well, of course you can.... but its always fraught with trepidation. When you've spent most of your life in one place, when you leave, you subliminally (with a very critical eye) always make silent comparisons with those new places like it matters or somehow your prior home will label you disloyal.

I recently returned home for a short visit with my Mom, Delia. It was her birthday and I needed to visit. It must be noted that I have been a bad son in that this will have been the only visit to her La Mesa home this year. Every year I promise her I will come often enough to relieve my conscious but something always comes up like work or other minor crisis that, in hind sight, really shouldn't have kept me from going but it helps me sleep at night to think I tried. There's got to be some Freudian theory to explain it (hopefully nothing involving cross-dressing) but there is some kind of block about visiting.

Seeing her is always a pleasure and even our phone calls (no....I don't call her enough either) are always fun when she describes in her broken English (Mom's originally from Mexico) her visits to church (devout Catholic with a capitol 'D'), her trials and tribulations with her sisters Mom's been labeled a "hoarder" because she likes to save sentimental stuff), as well as their little getaway trips together (recently to Solvaang, chocolate capitol of California where they got in trouble for being too loud after hours at the motel....those crazy septuagenarians). 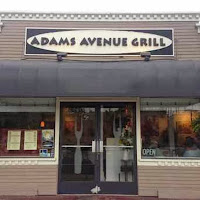 As if to salve my tender emotions, I was able to work two things into my brief trip. It was the Veteran's Day weekend and one of my former co-workers at the San Diego District Attorney's Office was available for lunch. They were told to go home at noon to start their weekend early and Diane was able to meet me at one of our favorite places, Adams Ave. Grill . She had the Pot Roast and I had the Salmon Wrap sans tortilla. 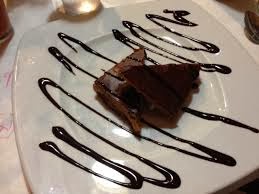 Each meal comes with dessert (chocolate cake...can't beat that with a  stick). We had a little over an hour to get current.  Her, step Dad passed away, no new man but new dog. Me, new job, first grandchild on the way, recent home improvements. It is always good to see Diane, she has this crazy infectious laugh that rises up from her diminutive center and has the ability to stop conversations across the room.

The second was my sister who was also able to drop down from Irvine. We spent a day together recalling old times, current events, looking at old pictures and generally cutting up. Beatrice and I have this innate ability of immediately connecting at our infrequent meetings (in the almost thirty years they've lived in Irvine, I have only been to their house twice..yeah, I know, bad brother too). But it seems like we immediately take up where we left off.

Of course, when I visit Mom, we have to go places to eat. She's 78 and her arthritic hips keep her from getting out much. She has a penchant for really bad Mexican food (she thinks Jack in the Box has great tacos...remember she's from Mexico) and seafood. So, on arrival, I took her for dinner at Red Lobster. I had the Tilapia and she had the coconut shrimp.

The following morning, she requested Mimi's Cafe in Mission Valley. A favorite breakfast place for her and Dad. After ordering, she remarked, "like father like son" (well, actually it came out, "you just like'a yur father"), he too was a pancake guy. The special was pumpkin pancakes with an apple compote drizzled (more accurately "poured") over the top. She had the Countryside Two-Egg Breakfast.

Sister arrived around brunch and we shared some homemade Tamales (the beef with salsa was awesome). My sister determined we needed to take a ride and Mom asked if we could cruise Del Mar. She wanted to scope out how to get there for a future foray with her sisters. 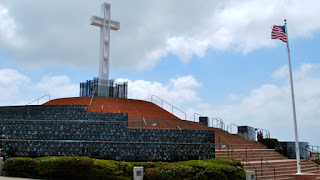 She also wanted to stop at Mt. Soledad for that panoramic view of La Jolla Shores but when we got there, there was a Veterans Day event going on at the summit and there was no parking so we just drove round and left. Some of you may be familiar with the on-going controversy over the monument and cross at the top of the mountain. Things have really settled down since the memorial was taken over by the Mt. Soledad Memorial Association.

On the way back, we discovered that Chick-Fil-A (huge in Texas....relatively new to Southern California) had planted a restaurant in my old home town Santee (no...I didn't drive by my old house....that too is just too hard to do). Mom had never been and asked for a chicken sandwich. I had a salad but sister and Mom had their chicken salad sandwiches which Mom gave her approval and vowed to go back when she craved fast-food chicken.

This brings me back 'round to my feelings about visiting. It's just....well it's just depressing to be there. Don't get me wrong, I love Texas and all that comes with it.....but we left the fun and sun capitol of the world where all my favorite hangouts reside, people I grew up with, worked with and memories around every street corner. And the ocean. I really felt I was immune and didn't think it was a big thing until I came on this trip. Let me elaborate.

The night before I left, Dianna had sent me off with a wish to have me coat myself with the smell of the ocean so she could smell it when I arrived home. Dianna is a native San Diegan, born in La Jolla and spent most of her life within a short drive of the beach. She grew up in Linda Vista and I in Serra Mesa where, when the wind was right....you could smell the salt air penetrating the coastal plains and canyons that surrounded us. And, while we're on the subject...Mountains. To be fair, Texas does have a few high points like Guadalupe Peak (8,749 ft) and Bush Mt. (8,631 ft...no relation the either president)....but that's it. Yeah, yeah...there is Palo Duro Canyon and the like but the place is pretty flat the result of being a former ocean floor. If you're driving you can see where you're going to be three hours from now. San Diego geography varies from sea level to 6,140 feet (Palomar Mountain). All in the same County! But.... I digress. 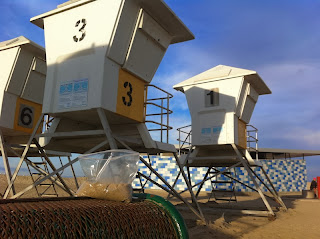 To grant her wish, I decided to make a beach run on the way back to  the airport and get her some sand she could run her fingers through from the beach at the foot of the Ocean Beach Pier. As I knelt down to shovel a handful  of sand into a sandwich baggy (yes...people were watching me), I had a moment of regret that I was no longer a member of that part of the world and was acting like the classic tourist bringing home an obnoxious road-trip gift for a loved one. Like going to Florida and buying a stupid seashell you realize you could have picked up at the beach for free. I then returned, looking forlorn, bulging sandwich bag in hand, to my trusty Kia rental car for the trip back to the airport, the check-in and the ever-appealing security screening at the old Lindberg Terminal 2.

Typing away in the Gate 2 cafe sipping my Sweet Tea (yes, Texas has left it's mark on me) hearing, "Do I have to take off my shoes?" for the 800th time, I searched for answers of my own. Once boarded, I sought out a center seat over the wing (statistically the safest spot) and the fact I never got better than Zone C on Southwest. The flight attendant actually suggested that the letter C refers to the word "Center Seat" because if you're in that boarding group...all that's left are the center seats. He was right.

As I wended my way east, the quickly darkening skies driven by the time change added to my funk. I wondered aloud to my now snoring seat mates whether I would ever be able to let go of my old home and be content with where I am today. The answer struck me almost immediately. Home is where family is. Let's face it, we are the sum of what we've done, who we've met and where we've been so I will always be connected to those places and people. We are inseparable. And that's fine with me.
Posted by Nick Saraceni at 8:22 PM