Here we are the first full weekend of December embracing the 72nd commemoration of Pearl Harbor Day and we're stuck at home. For those of you who missed it (like you Southern Californians), we encountered an unusual weather event for Texas. A massive cold front rolled out of the northwest (those darn Canadians) and met enough moisture to rain then turning to sleet which stuck with accumulations of several inches in some spots. Overnight temperatures dipped down to the teens making all those ice crystals meld together into a giant sheet of ice with all the downed power lines and slippery highway chaos that goes along with it.

Now it does freeze from time to time in Texas but it's a rare moment when ice storms blanket such a large area and virtually shut down most of North Texas.  Luckily (if you want to call it that) it was a well established fact early in the week and many businesses and schools had already decided to close prior to anybody having to suffer the roadways. The downside was that we were forced to remain cooped up in our Frisco winter residence for the duration.

For Dianna this was a mixed blessing. Her new job means her office is our home. She works remotely over the Internet (thanks Mr. Gore) so she doesn't have to drive the treacherous roads but it does mean she has no excuse not to work because of the weather. My job at the Courthouse was cut off based on the local school district deciding to close Friday morning. We were now landlocked with only our wits and the food we had in the house (and the copious amounts of alcohol) to help us survive. I wonder how it would have gone if the power hadn't stayed on.

This caused quite a stir with the dogs in that they are primarily outside dogs and are clearly confused by having to remain indoors. However the confusion disappears when it's time to go out for potty breaks. They clearly have a need until the door opens. Jenna (the white Lab mix) is a bit more heartier than her brother Marley (chocolate Lab) and runs out to the slip-n-slide that our backyard has become. Marley feels nature calling and reluctantly makes a dash out onto the frosty ground to do his business and dash back to the back door and the inner warmth it provides. Marley is all southern dog....no Yankee in that K-9 what-so-ever.

And there is our new found discovery about Marley's flatulence. Being an outside dog, we had not realized our dog has been struggling intestinally. This didn't become evident until the afternoon of the first day. I always feed them their main meal early in the morning before work and give them a half bowl when I get home. On normal days we bring them in at bedtime. Once they started staying in full time, we began to notice a periodic release of toxic gas that would permeate the room and drive us out. This became so regular an occurrence, we instituted a regular regimen of sending Marley outside at the slightest eye contact he made with either one of us. He would be lying there quietly when, without warning, a sharp odor would rise up, a kind of brain-freeze would occur as it enters your sinuses.  I feared the heater might kick-on and ignite something. Beside smoke and carbon monoxide detectors...I think someone needs to develop an animal methane detector. Forget about your cow flatulence...this could be the answer to the whole Greenhouse Gas dilemma Al.

Thus we are now contending with the fact Dianna and I are housebound and can't get away from each other. This has been born out when we both are occupying the kitchen. Some of you may know our kitchen is enormous. The center island is big enough to launch small airplanes. So imagine both of us tottering around this cavernous chamber and unable to avoid each other. The common interception point is the Keurig coffee machine. I seem to always be underfoot as she throws another K-cup into the device. More complication was added when I chose to expand the dogs horizons by opening up their normal range of master bedroom and living room to include the kitchen. They could be dead asleep but when they hear us move into the kitchen they are up and roaming right behind us, virtual shadows. They quickly get underfoot while Dianna is trying to pour a new glass of wine or make some coffee. It may be they just love us very much and want to be apart of our wandering but I'm just as sure they are hoping we'll take pity on their predicament and hand them a Scooby snack.

Now, Dianna and I have not been arguing or giving those dart like stares yet but that could be coming. See I decided to utilize my time in catching up on some baking and food preparation while Dianna worked and then settled down into some serious TiVo watching. You see this weather event coincided with a holiday tradition Dianna has had for years (since the invention of the VCR/DVR). My wife will record legions of Hallmark channel holiday movies starting at Thanksgiving all the way to New Years. You know those sappy holiday love stories where boy meets girl, girl (or boy in this politically correct world) gets dumped by boy and they miraculously meet again years later and rekindle their love and live happily ever after. Then there's the inevitable Santa crisis where he's unavailable and some mortal or elf takes over and makes Christmas happen. Lots of cute little kids with sad faces then bright smiles all around when they discover (again) that Santa is real and the world is a better place for it. 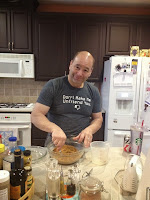 My M.O. for this is to sit and kibitz. I will point out the obvious flaws in the story line or scientific impossibilities which make Dianna roll her eyes and suggest I go write something for my blog or shovel the driveway....guess which one I picked. Hey....I'm a paid professional observer and I report what I see.

So I decided to do some baking and be responsible for preparing our meals (and try to stay out of her way). I whipped up one of my world famous Key Lime Pies to assuage her cabin fever as well as preparing lunches and dinners for my bride and I. So with a little help from the Food Channel and online, with the assorted ingredients from pantry and fridge, I made some tantalizing concoctions which have kept up our morale and energy up. Well, there was that first tragic attempt to make a scratch pie crust for a pecan pie filling we had on hand. It's really not too bad if you heat it up....hopefully the power will keep the microwave functioning.

As I write this it's still below freezing. So, as we look toward a new week we have to ask ourselves...will the ice break and life return to normal or will we run out of food and be relegated to just drinking our way through the rest of our imprisonment? Only time and our supply of vittles will tell.
Posted by Nick Saraceni at 7:52 PM