Since we moved to Texas, we have seen few visitors from the old country (yes...you know who you are) and so it was, with great pleasure, we had the opportunity of hosting my sister for Presidents Day weekend this year. She is my only other sibling and we have a very special bond we cling to over the vast (cultural and geographical) distance between Costa Mesa, California and the hinterlands of North Texas. Of course, as an added bonus, we were in the midst of a cold snap and I had to warn my dear sister not to bring her flip-flops or tank tops and resort to a heavy coat and some long underwear. On her arrival, in typical Texas style, we made it through the weekend with a Sunday high of 73 to be met on Monday morning as a Canadian low blew through with starting temperatures at 28 degrees with a howling North wind and threats of snow.

Undaunted, we were able to get her to the Dallas Arboretum and a couple of first run movies which she loves to do. On Monday, I decided to take her for a tour of our Cowboys Stadium in Arlington, Texas. Of course, since it's completion in 2009, the owner, Jerry Jones, has sold the naming rights to Dallas based AT&T further disappointing hardcore Cowboys fans who are still reeling to this day over the moving of the Dallas Cowboys from the famous Cotton Bowl Stadium in Fair Park in 1971, to first Irving, Texas and now to Arlington.

Mr. Jones has always been the bad boy of Dallas Football. He's the rich guy everybody loves to hate but he does put on a pretty good show. It was his dream to have the biggest and best stadium to keep Dallas, his beloved Cowboys and...lets face it, his legacy (well and his ego) the center of attention throughout the world, and I dare say he has succeeded.

The original plan was a $650 million dollar wonder which Arlington residents ponied up half in a bond proposition to help with the costs. But Mr. Jones' desire for greatness and additions drove the ultimate price to $1.5 billion. There is a litany of reasons why this happened and most have to do with up-sell. You know the concept, when you go in to buy a two-door sedan and drive off the lot with an Escalade. 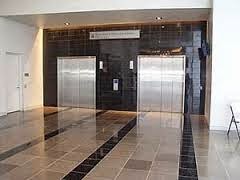 An example is the floor tile. The architects envisioned standard grey tile interspersed with stock black tiles strips. The black tiles were around $5 a tile. But knowing how Jerry loved his Cowboys, somebody did the research and found a tile from Labrador called Labradorite in which the crystals produce an iridescent play of colors which, when struck by a light ray, flashes a bright blue color as you pass over it. It's quite remarkable to see in person and mimics the Cowboy Blue of the teams logos. Well... he had to have those tiles and they are everywhere and cover the floors of all the elevators. He purchased them by the thousands at $35 dollars each. 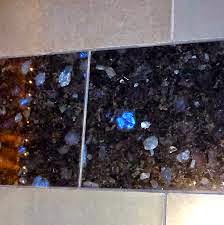 The structure is mammoth. The roof is the largest free-standing dome in the world weighing in at 14,100 tons of structural steel (which, I am told, is equivalent to the weight of 92 Boeing 777s) covering 3 million square feet of stadium (73 acres) which stretches 900 feet from end zone wall to end zone wall. The roof soars to 292 feet over the field and the arches stretch 1/4 mile from end to end. Of course, for strength and durability, they had to be made of the strongest steel in the world. Grade 65 steel..... from Luxembourg of all places. Little known fact is that the roof is not in contact with any of the sides of the building. The entire roof is held up by the twin arches which are anchored into the ground on the exterior of the building like two huge Roman Arches gathering strength as each welded and bolted section transmits the weight to the ground at each of the four points. 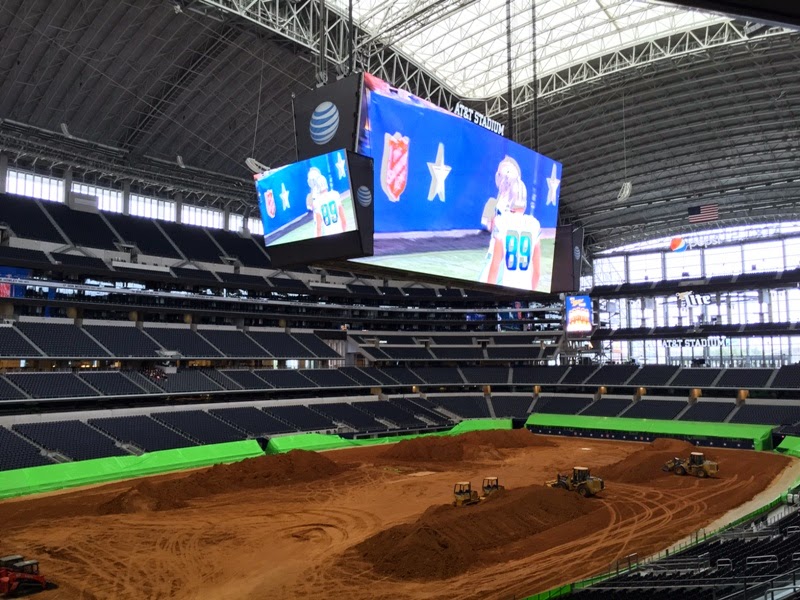 The arches are also responsible for holding up the giant video display of the two 1080p main 72’ high by 160’ wide panels are made up of 5,168 individual lighting units or panels per side or 10,336 total. End Zone Displays (which the fans sitting in the end zones view) are each 51 feet wide and 29 feet tall. Each end zone display screen weighs 25,000 pounds. Mitsubishi custom built this thing which weighs about 400 tons and can also accommodate another 90,000 lbs of lighting and sound for concerts and other events. The tour guide remarked that the $40 million dollar cost of the video complex cost more than the original old Texas Stadium this stadium replaced. 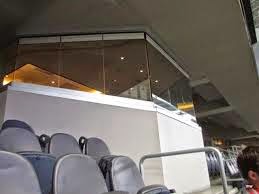 Thus we were led into the bowels of the stadium and its inner workings. We were given access to Jerry's booth where he monitors every home game. It's almost "bunker" like in that is surrounded by thick concrete and very thick glass (Hey Jer. What are you worried about?). Went into a Suite and were told the stadium had the most suites of any stadium (of course). 360 suites occupying all levels and you too could be an owner. Prices range from the high 6 figures to several million and six percent of the suites remained unsold. Our tour guide pointed out that 60% of all the bathrooms in the facility were women's bathrooms and he has never heard a complaint of lines in the bathrooms yet. 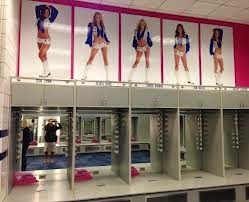 We made it down to the basement where all the warehouses and team rooms can be found. We visited the Dallas Cheerleader dressing rooms and Cowboy locker room as well as the press room where Head Coach Jason Garrett and Jerry explain the victories and loses of the team to thew media.

Little known facts about the Cheerleaders is that there are no tenured Cheerleaders. Each of the 40 Cheerleaders must try out each year in May when several hundred other women come to tryout as well. Jerry Jones’ daughter, Charlotte Anderson has been in charge ever since her family bought the team in 1989. And if you're caught dating a Cowboy...you're out, no appeals.

The Cowboy Locker room was very spacious with defense on one side and offense on the other with a separate locker room for the practice (read second stringers) team members. Our tour guide often pointed out the extravagant appointments of Jerry's Stadium and this place was no exception. He noted that the wood used for each locker was a special Burlwood which was commonly found in the interiors of fine cars like Bently's and Rolls Royce cars.

A very fine tour and kudos to our tour guides Bob and Susie, both were fellow retirees and this was a part time gig a couple of times a week and on game days. On a personal note, I have been to many sports facilities and I was struck by how clean this place was. I firmly believe you could eat off the floors of this place and clearly these folks take their jobs seriously. Bob said, on any given day, there are about 350 employees working but on game day....as many as 6,500 are roaming around tending to the fires and making your visit as seamless as possible. Amazing place.
Posted by Nick Saraceni at 1:26 PM