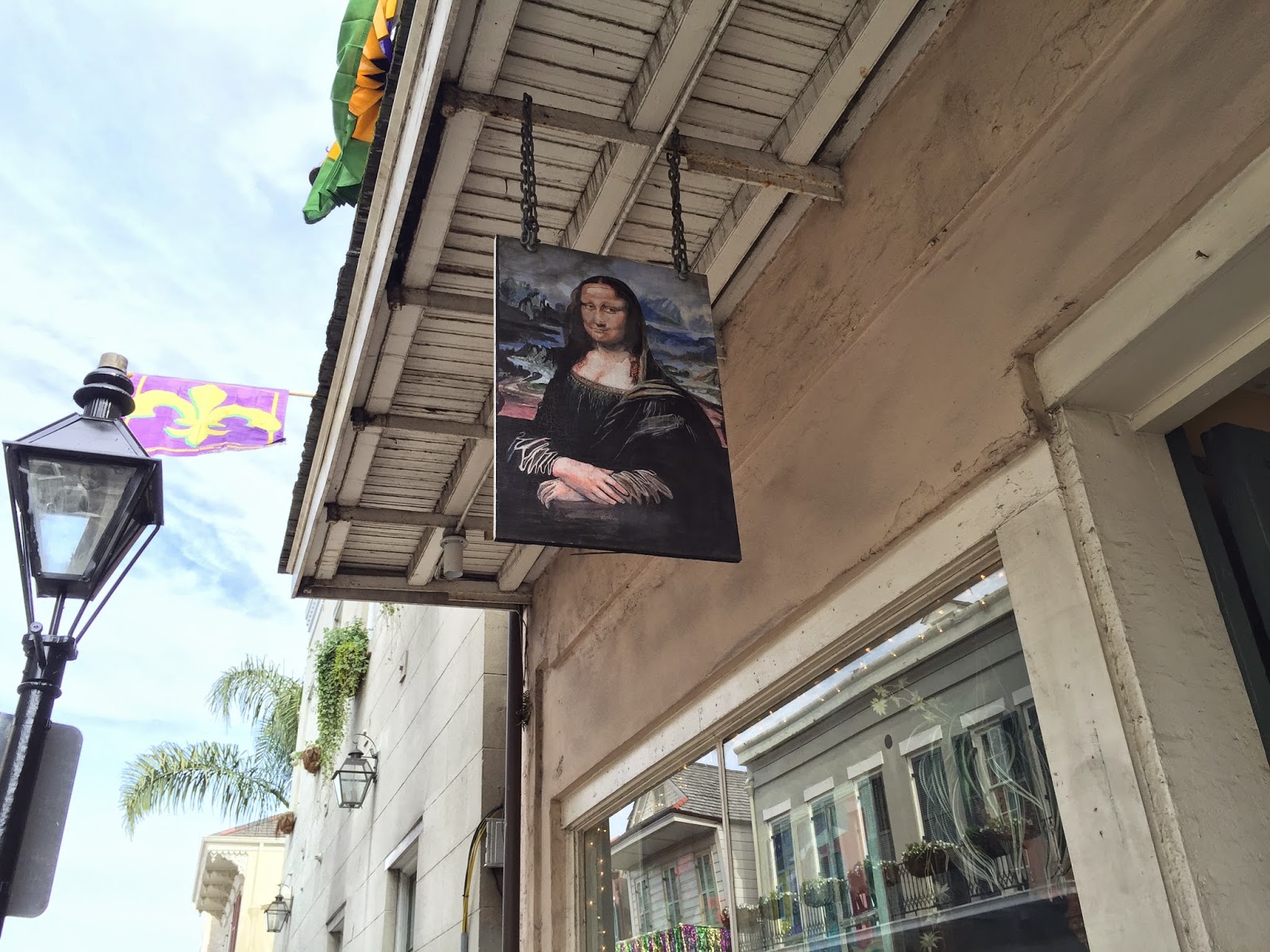 The magical day arrived and I was kicked to the curb while the women folk got their nails and hair done. Left to my own devices I realized I was hungry. I decided to do a little street surfing and locate something off the beaten path. I walked several blocks eastbound along Royal St. hoping to find something unique. As I walked, I came across a picture of the Mona Lisa hanging from the balcony floor above. I turned to discover a quaint Italian Restaurant hiding behind the thin framed French doors. I entered and was immediately seated amidst four walls covered….I mean covered with various paintings of the Mona Lisa both traditional and modern to abstract. Very cool and weird at the same time. What was important was the menu. Very traditional selections and the best thing was they had Lasagne. Now, many of you may know Lasagne is my Kryptonite. I gauge every Italian restaurant I attend by it’s Lasagne. Lasagne is a sacred delicacy, mana from the Gods and can only be properly enjoyed by true believers who risk everything as they approach the serving alter (lots of genuflecting here). Kind of like my Great Pumpkin, if you will.

I ordered the Lasagne and waited patiently, sipping cautiously on my ice tea, munching on my cheesy and lightly toasted garlic bread in clear view of the kitchen door, like an expectant father watching for the doctor to burst forth with the new bundle of joy. 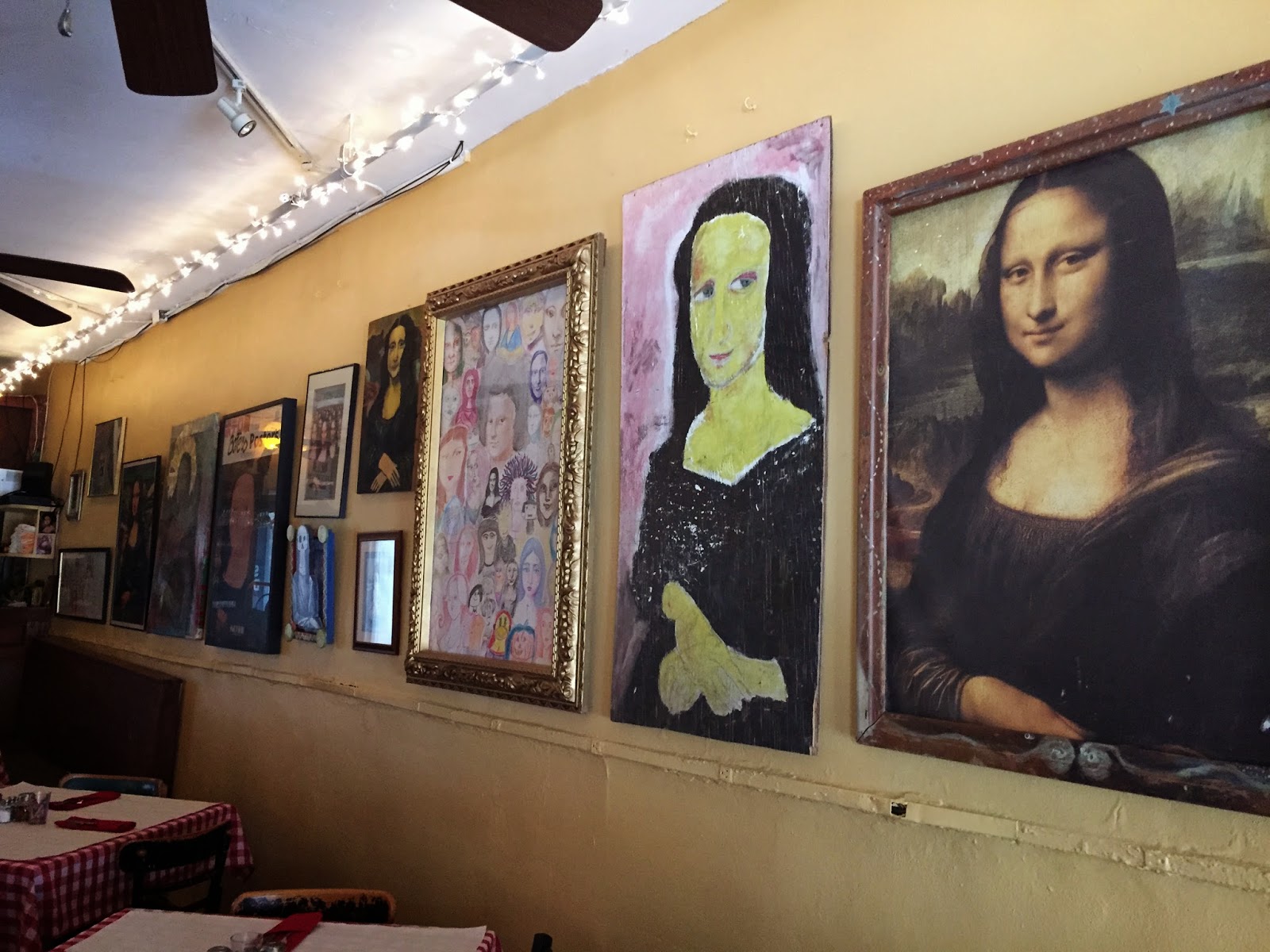 And then, the door creaked open disgorging my server cradling what can only be described as a football of Lasagne. He gingerly maneuvered it around me like the arm of a great crane arcing its load gently to the ground. As it settled onto the table cloth steam rose from it as though it had gently exhaled from the exertion.

This thing was big. It consumed the entire oval metal baking dish and swam in a sea of red tomato sauce like a great ship seeking shelter in the dry dock of the hot metal dish. It was three layers of pasta oozing cheese and more red sauce trying to reunite with it’s siblings below. The tender pasta had ever so crisp edges where it was touched with the heat of what I'm sure was an Italian brick wood-fired pizza oven. None of this high-tech stainless steel convection oven crap….no, not in my Walter Mitty world. 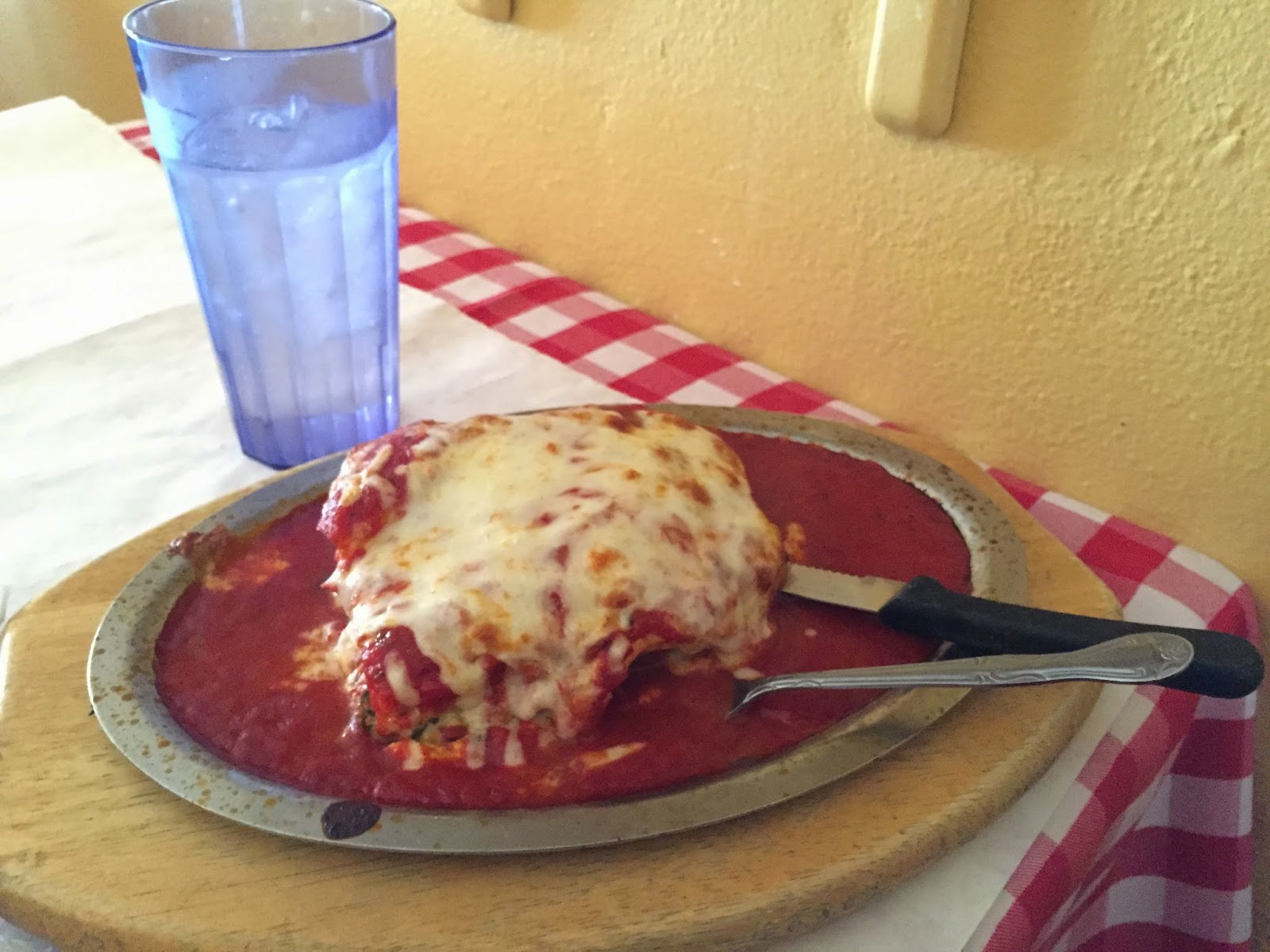 This Lasagne was amazing. Not too hot…you know…not that over baked kind where the first sample of cheese sears then sticks to the roof of your mouth and from then on, you’re incapable of tasting anything thereafter. The sauce was sweet without being obnoxious and not stepping over the bay leaf and garlic infused inside. The three tiered monster was sturdy enough to require a knife to carve it like a block of butter. I was only able to eat half of it and was further disappointed when I realized I was unable to box it up for the trip home. It was like saying goodbye to an old friend as my server reluctantly returned it to the kitchen for disposal.

But luck would have it, there was a dessert menu. A limoncello cake was calling to me on the menu and I ordered it to salve my wounds. My wedge of a delightful yellow two layer cake cemented to the plate with a delicious strawberry shmear and Mascarpone frosting was sweet and enjoyable.

But I digress. The wedding was a modest affair in the back of a bakery. It was a favorite haunt of Nicole and Rob and they thought it would be cool to have the wedding there. The  Croissant D’or Patisserie is on Ursilines St. in the French Quarter just a few blocks east of Canal. Far enough away from the tourist madness, it serves breakfast and lunch to the natives and the tourists that stumble upon it. It has a neat outdoor courtyard behind it which reaches up to all three floors above.

The owners made the place available after-hours so we had it to ourselves. At the appointed hour, we all assembled and laid out the bubbly and cake the bakery made for us (how appropriate). A small crowd of family and friends watched as Jared, our preacher (newly ordained Internet Cleric), did a fine job and impressed those assembled with the depth of his invocation. Really nice.

Then came the picture taking. I had asked our good friend Tameka to come along and document the event. Tameka is a native of New Orleans and it also gave her a chance to sneak in a visit with family and friends. Tameka brought along her cousin Lorraine to help photograph  the proceedings. Check out Tameka’s work at her website: Passionate Photography. 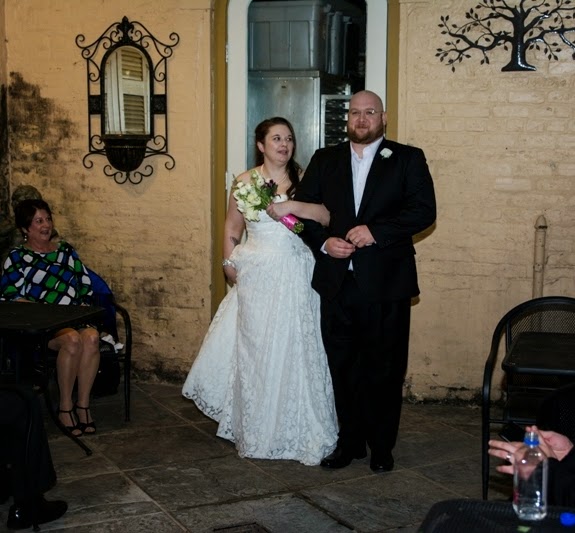 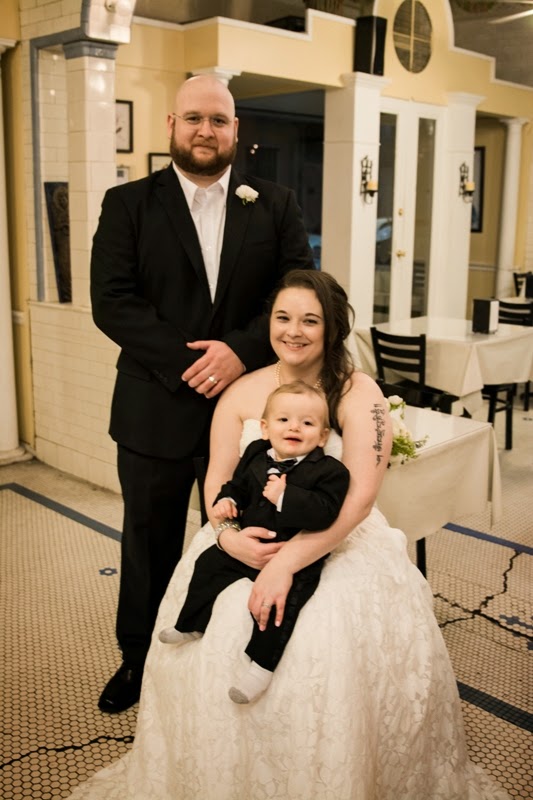 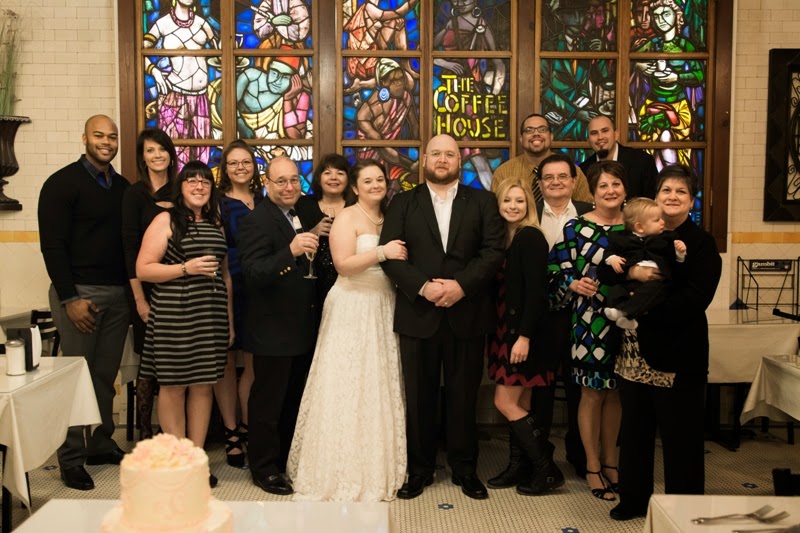 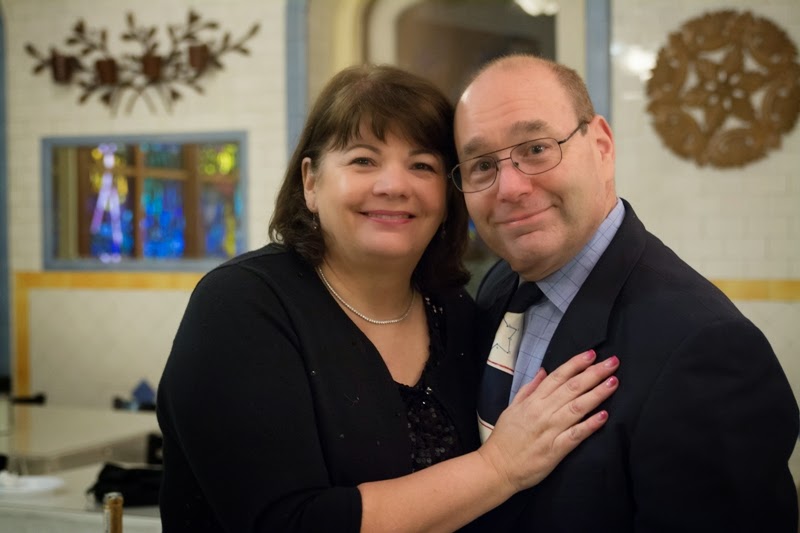 With all of the wine and champagne gone, we moved to  Deanie’s, a seafood restaurant on Iberville St. just a block east of Canal Street. Pretty much everything seafood is there and much of it batter fried and delicious. I'm not much of a seafood guy but I must say their presentation was “family style” with big portions and awesome service. After making sure everybody was able to get back to their hotels without a police escort, we wandered back to our hotel and quickly fell asleep…hey, we’re old and it was way passed our bedtime. 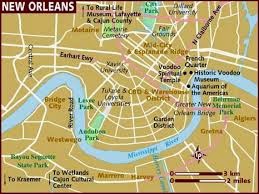 Our last full day we decided to try a whole-city tour of the Crescent City (although there are many theories about the nick-name, a favorite is the shape of the bend of the Mississippi at what was the site where Jean-Baptiste Le Moyne de Bienville (namesake of our hotel) landed with his crew. I admit the Grayline Tour is a little lame but I try to get a tour of a place to help us plan for future visits. We got an opportunity to visit all the major neighborhoods and got to see some cool homes and landmarks.

What we (I) walked away with was a little trivia for those of us unfamiliar with the origins of New Orleans is about Cajuns and where they come from. Most of us have been led to believe Cajuns are just the wilder side of original French settlers who make some spicy food. There's more to it. The word Cajun derives from a French ethnic group known as Arcadians. It was land named by explorer Giovanni Verrazanno for pretty much the whole east coast of Canada and the U.S as "Acadia" (also referred to on maps as Arcadia). Arcadia derives from the les Cadiens or Les Cadiens or les Acadiens". They originally settled in what's now Nova Scotia in the early 1700s but came under British control after the French lost the Seven Years War in 1763 (yes...the French and Indian War for you purists).

Over time the name was mispronounced and shortened to Cajun.  And it kind of sounds like the origin of "Canada" but that's "kanata" the Huron-Iroquois (native Canadians) word for "village" or "settlement" (I know...more useless information). The Arcadians didn't cotton much to their British rulers and refused to sign an oath of allegiance so the British forced them to leave. This is known as the Great Upheaval or Le Grand Dérangement in their culture.

Now these folks are not to be confused with French Creole people (don't make this mistake in a crowd of Cajuns....that wouldn't be wise). The term creole was first used by French settlers to distinguish between anyone born in Louisiana and someone born "from away." So creole people are considered "native born" in Louisiana. They too have had a major impact on the state's culture; hence, Louisiana is known as the Creole State. 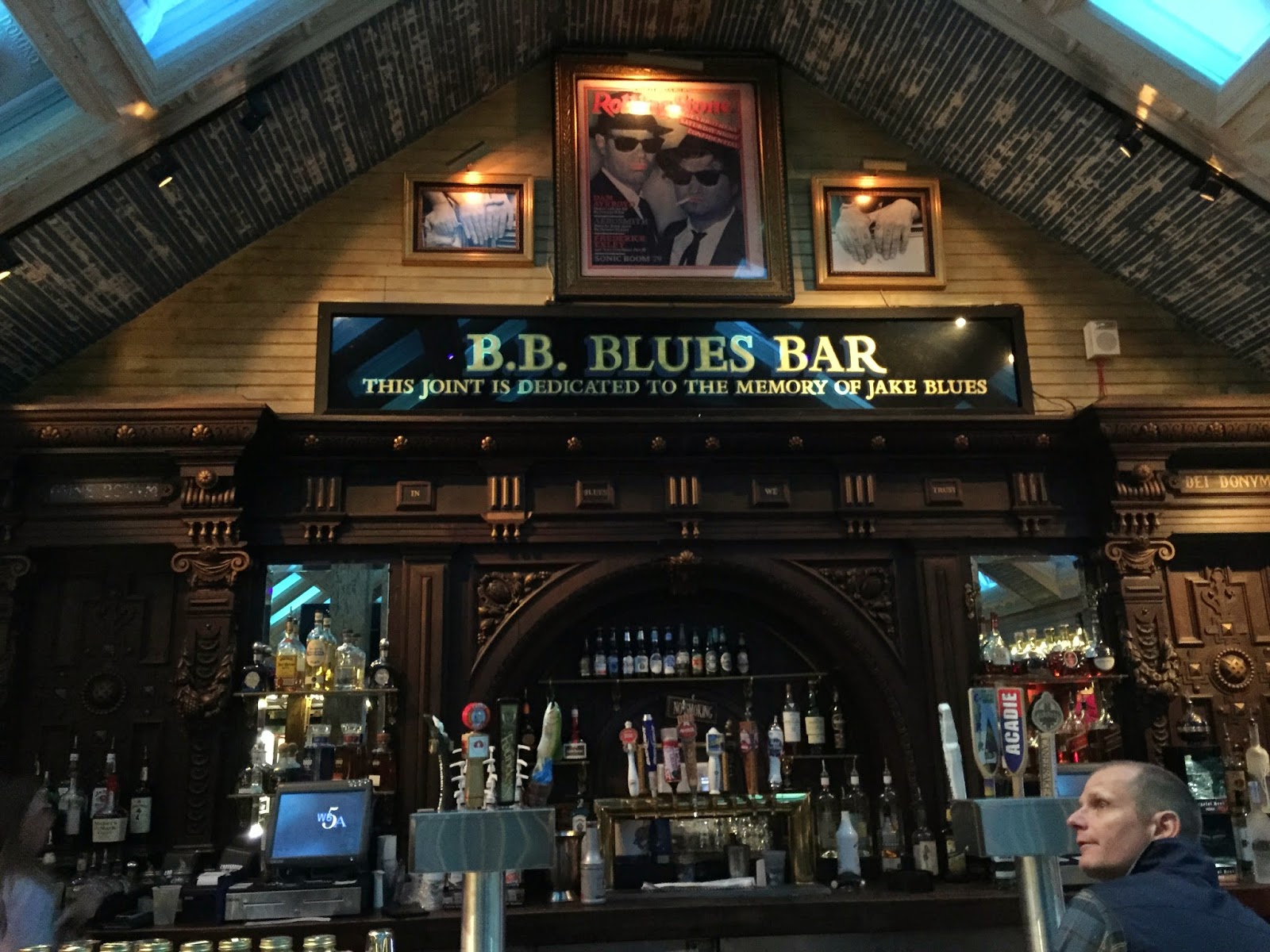 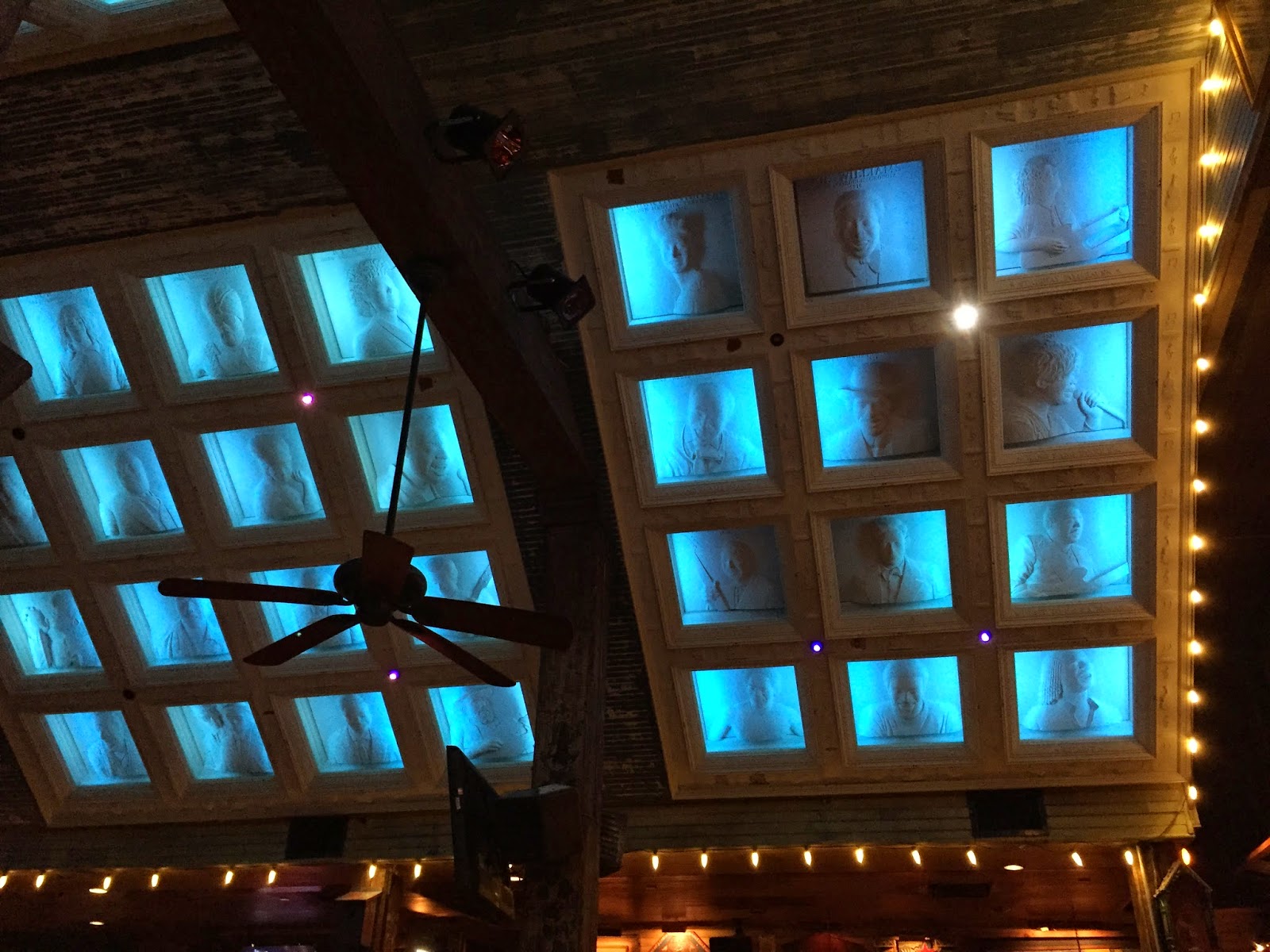 Our last night we dined at the House of Blues on Decatur. Dining was cool but I admit a little creepy. In the ceiling were soffit boxes with the images of famous dead musicians.


Each inset was back-lit in a soft blue light. Really weird...but the bar was pretty cool, to the memory of Jake Blues of Blues Brothers fame (you might know
Dan Aykroyd is a part owner of the chain)

Wedding accomplished, we made our way back to rainy and cold Texas for what will become one of our coldest winters on record. Lots of ice and snow to come. As the weather improves so will our chances to get out again for more adventures.

Posted by Nick Saraceni at 3:49 PM