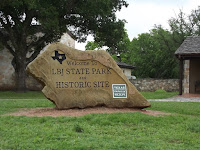 For day two of our San Antonio trek I decided to do a tour with  Grayline Tours. It was a day long tour but would take us out of San Antonio to Fredricksburg with stops at Lyndon Johnson's boyhood home and ranch. We were in luck in that it turned out to be a small group of adults (no little ones....well there was a Canadian couple...but they were OK). It was a nice limo bus with good air conditioning and our driver was very well read. I entertained myself trading history notes with him as we drove around downtown picking up the other guests. 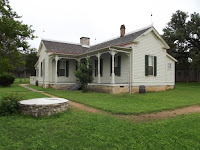 It was a long hours drive to Johnson City and Johnson's boyhood home. Lyndon Johnson's grandfather Sam Sr. and great-uncle established a cattle droving headquarters in the 1860s on land that is now part of Johnson City, Texas. The Johnson Settlement is part of the boyhood home park and has volunteers who act out roles as the townspeople in period garb (Debbie you need to come live here...Victorian Era!). Though Lyndon was born in the family home on what is now Johnson Ranch, Sam Jr. moved them to Johnson City when he was five and lived there until graduation in 1924.

The home was originally built by Blanco County Sheriff W.C. Russell in 1901 and the Johnson's purchased it in 1913. It had a shotgun hallway to cool the house in summer and a sleeping (screened in) porch for those hot summer nights. Johnson ran it as a cattle ranch but when times were bad, he switched to cotton or corn. 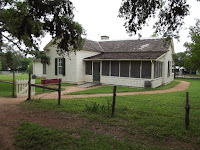 The Presidents mother, Rebekah Baines Johnson, was a very interesting woman who had a profound impact on Lyndon. Rebekah was one of the few educated women at the time having attended Baylor College. For a time she taught and was a reporter for several newspapers. That's how she met Sam Jr. She was doing a story on the young legislator and they fell in love. They married in 1907 and she became a ranchers wife. Problem was, Rebekah was very refined and had never done manual labor of the kind to run a working ranch and farm. She was overwhelmed and had to make do as Sam went off on business and sessions in Austin. Besides attending regular school. she continued to tutor her family as well as other children in the town.

Life in the Johnson home was tough. From the time he was two, Rebekah would teach Lyndon his ABCs and he was an accomplished reader by four. A typical night would have the children listening to the evening news on the radio in their family room. They were then told to write essays on what they heard and after the parents reviewed them for content, two children were chosen to debate each other on the subject in front of the fireplace. Ambivalent about his own studies, Lyndon made his way through school and became a teacher by attending the Southwest Texas State Teachers College at San Marcos (now Texas State University, San Marcos Go...Bobcats).

Johnson also learned from his father. From the time he was 10 years old, Sam would take young Lyndon to Austin to sit in on legislative sessions. He watched his dad and others make deals and move political agendas throughout the state. So you can see he was an accomplished debater and political insider long before he ran in 1937. 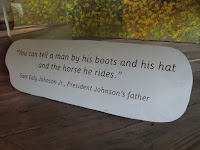 For a time he taught but politics called to him and after a stint in the Texas Legislature, he went to Washington to serve as an aide in Congress. He made fast friends and endeared himself to many important members of Congress including the great Sam Rayburn. 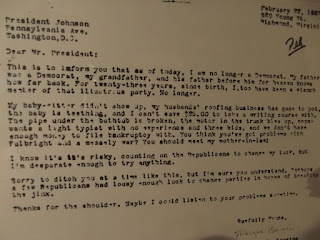 Johnson married Claudia Alta Taylor, (Lady Bird was a childhood nickname), of Karnack, Texas on November 17, 1934. On their first date, which was breakfast the next morning at the Driskill Hotel (been there...very cool restaurant) and a long drive in the country, Johnson proposed. Lady Bird did not want to rush into marriage, but Lyndon Johnson was persistent and did not want to wait. Lady Bird accepted his proposal 10 weeks later and were married at St. Mark's Episcopal Church in San Antonio, Texas.. They had two daughters, Lynda Bird, born in 1944, and Luci Baines, born in 1947. Ok.....weird factoid, Johnson had a practice of giving people and animals names with his and his wife's initials, as he did with his daughters and with his dog, Little Beagle Johnson. 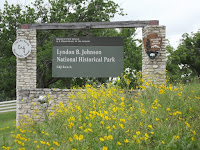 We moved to the Ranch in Stonewall, Texas. This was his actual birthplace and a restoration of that home is on the property. Of note is the one room schoolhouse he attended in his youth. The Junction School was the backdrop for Johnson signing the Elementary and Secondary Education Act of 1965. Landmark legislation which brought needed funds for "educationally deprived" children. The money could be used for purposes such as reducing class size, hiring remedial teachers, and providing school breakfasts a part of over 60 education bills he passed in his term and a half, more than any other President before or after him. The Junction School was purchased, restored and moved in 1972 to the ranch entrance as part of the National Park. A classic example of a one room rural schoolhouse. 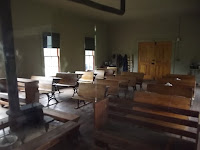 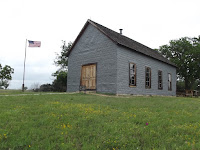 The ranch is based on the original family ranch house which was expanded over time. The Park Service restored and maintained the house to appear as it did in 1967. MAP. The original section of the home (far left section in photo below) was built out of the native limestone fieldstone by a German immigrant, William "Polecat" (I love that name) Meier in 1894. In 1909, the President's aunt and uncle, Frank and Clarence Martin, bought the house and added the main central portion of the home. The Johnson's bought the home from Lyndon's aunt in 1951.

The two story house has a very 60s feel to it right down to the three big picture tube Admiral color TVs in every room (remember....before cable...there were only three networks) and a multi line phone in each room the President used constantly. It had a huge kitchen his cook Mary Davis whipped up dinners for family and international guests alike. There were lots of stories of Johnson getting a world leader or Congressman out to the ranch and, now isolated from civilization, strong arming them to do his bidding.

LBJ was famous for his powers of persuasion, dispensing them with what became known as "the Johnson Treatment." He used his imposing physical size and intimidating personality to emphasize his point. He often towered over those he meant to intimidate using a "teacher's stance" he learned while teaching. Hands behind the back while leaning forward from the waist. 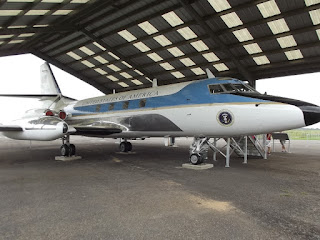 That was accomplished with a 6,300 foot runway Johnson used to fly himself, family and visitors in an out of the ranch. It couldn't handle Air Force One so Johnson would fly into San Antonio or Austin and transfer into his Lockheed Jetstar twin engine jet or in a helicopter. He referred to the jet as "Air Force 1/2". Locals said there were days when it seemed there was a continuous stream of aircraft flying in and out of the ranch at all hours. 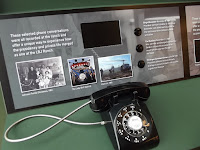 Still there are the outbuildings containing the headquarters of the Secret Service Detail, quarters for the military aircrew and the hangar which is now a museum and souvenir shop. It was fun to watch the kids handling the old rotary dial phones which told the listener about things that happened at the ranch. They didn't know to put their finger in the dialer and turned them like knobs. Held the receivers like luggage handles and pulled on the cords like accordions. I leaned in to one of the grandparents and asked if they were going to tell them what to do with them....she just smiled and whispered that, like me, it was just too much fun to watch so why interrupt the moment.

There were examples of Johnson's famous Lincoln Continentals. Every year, an Austin Lincoln-Mercury Dealer would deliver the first new four-door convertible Lincoln to the Johnson Ranch. It was always white with brown and white leather interior, AM-FM radio and two-way radio so he could always be in contact with ranch staff and the house. It was no secret that the Secret Service Detail hated when Johnson would roam the ranch in his cars, while drinking Cutty Sark Scotch and soda. 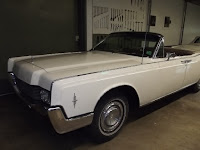 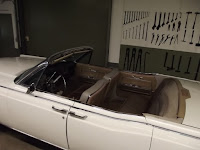 From the National Park Service website: "Periodically, Johnson would slow down and hold his left arm outside the car, shaking the cup and ice. A Secret Service agent would run up to the car, take the cup and go back to the station wagon. There another agent would refill it with ice, scotch, and soda as the first agent trotted behind the wagon. Then the first agent would run the refilled cup up to LBJ's outstretched and waiting hand, as the President's car moved slowly along."

He often forded the great Pedernales or some lesser stream to get to the other side. So much so they had a new earthen dam bridge built south of the original driveway to keep the cars dry as they crossed. 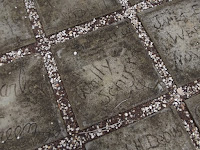 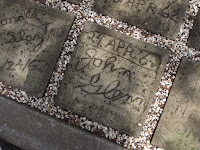 A walk around the house was a step back in history. The house was restored to the time at the height of his term as President (1967) and a walk around the grounds brings back a sense that you're still there. Johnson had many visitors and famous people during that time and is evidenced by a cool little memorial to all that visited. He had his workers pour small stepping stone size concrete pads where he had many of those visitors sign their names. It was a nice touch and a friend maker I'm sure. Astronauts to world leaders penned their names to the stones which will remain long after their gone. 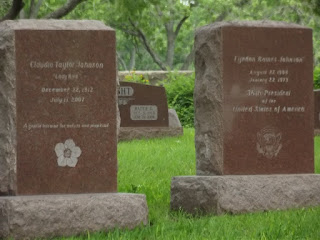 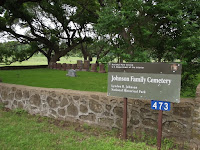 As we departed for our time in Fredricksburg, I reflected on our tour of the Johnson homes and Ranch. We stopped by the family cemetery on the banks of the Pedernales. So much history occurred here with echoes of Vietnam and the assassination of a President which suddenly thrust an initially reluctant Vice President a grand stage to push his new agenda for America which we still feel today and the thing I ended up taking away from this visit was....looking around as we walked, although we all try very hard to leave our mark on the places and people around us (and I know I'm going to get emails about this), no matter what we do or how famous we get, are we really just a bed, a phone or a chair we once sat in?
Posted by Nick Saraceni at 7:23 PM