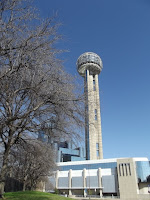 It was early February and my much older sister (well...two years) had arranged to make her Texas visit to the Saraceni clan. We always look forward to these visits so we can catch up on life and look back on the days of our youth (the ones we can still remember).

She made an unusual request in that she asked for Dianna and Nicole to join her in a nail painting, foot scrubbing event. A girls day out if you will, so they took her on a whirl-wind mani-pedi sojurn to their favorite Asian nail spa, Diamond Nails. There they wild away the hours having little Asian women poking and prodding their cuticles and toes......sounds devine.

As for me, we did our usual mixing it up with politics and the future of the developing world as we saw it. It was still early in the campaign and we were able to poke fun at just about everybody. Whenever she comes we always take in a movie or two. She rarely takes in a movie at home. Long story about her Ludite husband not wanting to be brain scanned at the door or something. Remind me to tell you about it sometime.

With Dianna, we saw "Hail, Caesar!" with George Clooney (surprisingly lame about some early Hollywood actors and the American Nazi movements the late 30s) and she enjoyed herself immensely. We joke with her about her very loud laugh when sex scenes come across the big screen. She has this propensity, at uncomfortable moments, when she will blurt out a loud one "Ha!" and a short staccato series of cackles which startle just about everybody in the place. You really have to hear it to get the full effect. She'll even do it while we're watching a show at home. It's amazing to watch and hear. 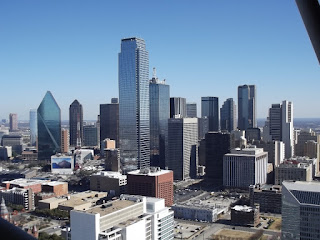 The tower consists of three floors with circular floor plans on top of four shafts of poured-in-place concrete. A central cylindrical shaft houses stairs and mechanical equipment. Three rectangular shafts, containing elevators, rise parallel to the central shaft. Each shaft's outfacing wall is made up of glass panels, affording views of the city during the 68-second elevator ride to the top. 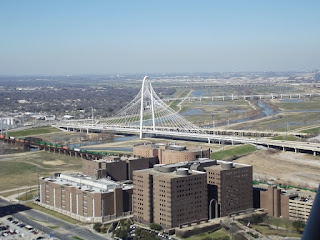 Celebrity chef Wolfgang Puck opened the fine-dining restaurant, Five Sixty on the tower's rotating top level on February 11, 2009. The name is a reference to the restaurant's elevation. The middle floor of the tower is used for special events managed by Wolfgang Puck Catering. The Cloud 9 Cafe is accessible from the observation deck, serving meals and snacks with a 360-degree view from behind glass but is only open on weekends.

At night, the globe at the top of the building is illuminated with 259 custom LED fixtures (would not want to change those light bulbs) and are controlled by various computer-generated patterns and colors coinciding with special events or holidays. 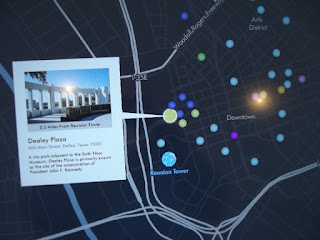 The Observation level is called the "GeO-Deck". It includes an interactive digital experience featuring information about Dallas landmarks and a pretty good recap of the Kennedy assassination. The view includes a birds-eye view of Dealy Plaza and the surrounding area to put the whole thing in perspective. The exterior of the observation deck features telescopes with views in every direction.

Not as much to do as I had hoped but a definite stop for Kennedy Assassination history buffs. The view of Dealey Plaza was the best part. You could see all the prominent features from the route down Houston onto Elm by the book Depository by the grassy knoll with the railroad tracks and picket fence to Stemmons Freeway. Pictures can't replace this view. 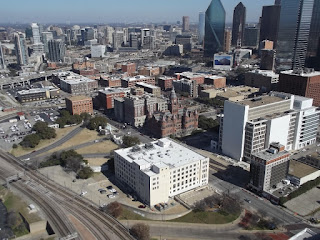 On the way back, my sister confided in me that she had not seen the new Star Wars movie and when she returned to her busy life back home, would probably not catch it before it left the theaters. Being the good brother I was (and without anything else to take her to) I busied by iPhone to determine when the next showing would be (great Fandango app) and got her there just in time to pick up popcorn a soda and a water. 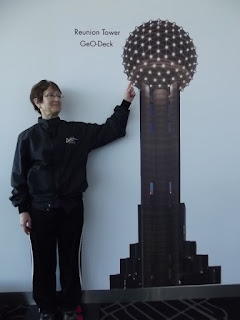 I had a great time seeing her and wished we were closer in distance and not so far away. Since both our parents have been gone, the older I get, the more I wished I could connect with her.

Yeah, we call each other periodically, she more than I, but its so much better when I can see her and hear that piercing laugh when we talk politics or watch a movie. Makes me want to hop onto a Southwest and drop into John Wayne Airport to hang out with her a little while longer. Maybe I can make that happen too.