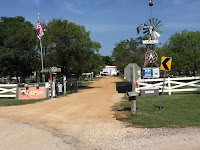 It was our 43rd wedding anniversary. Yes friends...the big 4-3. Looking out over the landscape of years gone by, when you're considering navigating toward that illusive 44, you seek solace, perhaps a place to contemplate the future. Ok, we decided to take our anniversary weekend at an Alpaca Ranch. Knowing how much Dianna loves animals (well only the "cute" ones), I thought it would be a great break from the stresses of her mortgage job (and well....me). 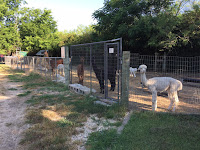 I decided on the  Old Irish Bed and Breakfast in Denton, Texas. A stone’s throw, as it turned out, from our home in Frisco. Jim and Rita Patrick have assembled a menagerie of animals, not only Alpacas but also llamas, ducks, geese, chickens, dogs, frogs, turtles and fish. Yes, they have a rather unique "catch and release" pond right in the middle of their estate. Jim tells the story of how they came to buy the place. Bed and Breakfast aficionados, they had a particularly bad experience at a remote (I could hear the banjo playing in the background as he spoke) B&B and swore they could do better. Then, while driving locally off our US 380 heading into Denton, Jim got impatient with the backed-up traffic and turned right off the highway at an intersection hoping to get around the stoppage. Little did he know it was a dead end but once on the road they were presented with a for sale sign to what is now The Old Irish Bed and Breakfast - Wedding & Events Center @ Patrick's Pastures Alpaca Ranch in Denton, Texas.

Jim and Rita decided to develop the land into an eco-friendly place where everything is recycled, he even has a Tesla electric charging station on the property. The lodging are five "tiny homes" if you will. Very modern with all the amenities except cooking stoves. We stayed in the Greystoke cabin. Jim saved the reason for the name until we got inside, seems Greystoke refers to a deceased favorite Alpaca who's pelt now hangs in his honor in the room. Ok...the website did say it was a little eclectic.

Also, there was the caveat on the website to discourage curmudgeons: "If you can't laugh, we're not the place for you. Sourpusses can go elsewhere; we'll even provide directions. Be sure to pack light, it may be a warm trip (LOL...a bit of Irish humor). WARNING: hypocrites, judgmental types, far-left or far-right super opinionated people, up-tight outta sight, frowny faces, blue-spoon, silk stocking, fru-fru types run away, quickly, please." They meant it. Jim will, at every turn, regale you with an off-color Irish joke and try to slip a little Irish Whiskey in your coffee (medicinal, of course). All that aside, it was a cool place to hang out. 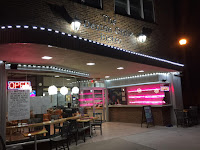 That evening, we decided to head to the Denton Square for dinner. Our hosts recommended a new place, The Denton Grille and Bistro. Very modern vibe from the usual Denton crowd though being right smack in the middle of a college town (University of North Texas, Go Mean Green! and Texas Women’s University Go Pioneers!), a mix of American and Pakistani (who knew), Dianna and I had the Fusion Sampler to split. It was more than enough for two and had 5 meats and a sauce. A bit spicy for Dianna so she ate most of the Paratha bread, kind of like Naan bread. Very delicious. 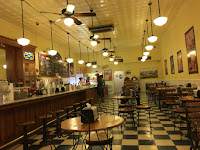 To calm the fire in our mouths, we sauntered over to Beth Marie's Ice-cream Parlor. An old timey ice-cream shop with probably 100 flavors, some adult style with alcoholic beverages inside. It was hot in the square that night, probably 91 or so, the ice-cream really hit the spot.

The next morning, we walked to the dining area for breakfast. Jim and Rita make a pretty good spread of eggs, bacon, fruit, hash browns and sausage interspersed with Irish humor from Jim. The best part of B&Bs is the time around the table where you get to hear from those who are there, including the owners. Jim and Rita had both been from big business and decided to break out on their own. Unfortunately, the economic downturn hit them hard and dried up some of their savings. The bed and breakfast gave them a new start and a way to slow their pace down.....not so much. As I said, they are very busy with the Alpaca business and very involved in the community. Jim has some side lines including a Pod Cast/Blog with his partner, Steve Putney, called Men in the Middle. 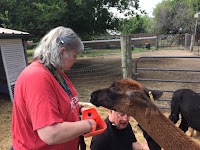 Dianna loved all the animals and swooned in the Alpaca Experience the next morning where we got the full history of Alpacas which included the care and hand feeding of the beasts. I had been of the opinion (after numerous Animal Planet episodes) that Alpacas were mean and liked to spit on people. Jim said that wasn't true and they proved the point while we were there. Jim said the only time they spit is the females spit at each other as a "get off me, Bitch" response.

They are very docile and, well, cute. They hover and push each other aside while we fed them from our hands. Jim's property backs up to a nature preserve with all sorts of predators so he keeps an armada of Great White Pyrenees dogs in the enclosures as well as at least one Llama for protection. Apparently, Llamas get aggressive with bobcats and such when they're around. 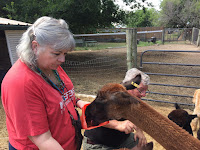 Jim said there are 24 different colors of Alpacas and showed us some samples of Alpaca cloth which reminded me of satin. Much lighter than wool yet very warm when made into sweaters. Jim and Rita have become very active in the Alpaca Ranching business and, as a side line, mentor new owners and breeders providing advice on housing, feeding and production of Alpaca fur.

After learning about Alpacas, we made our first foray into Denton to meet our ever-traveling friends, Scott and Silvia at our favorite hamburger place, "Rooster's Roadhouse"  off the square. Brisket Burgers all around as we spent some good time catching up on family and travels. Silvia and Scott were former San Diego PD cops who we met long before their Law Enforcement careers when we attended Lamaze classes before the births of our kids (and got in trouble often for cutting up....I guess this whole birthing thing is considered serious business..who knew).

That night, we met our hosts at Bagheri's Italian Restaurant  on University Avenue in Denton. I mentioned my intense like of Italian cuisine and Jim suggested Bagheri's. I, of course, always order the Lasagna as my sterling test of an Italian Restaurant. Hey...if they can't make a decent Lasagna, they're not worth my time. I was not disappointed with a very dense and tomatoey, well baked mass of pasta and cheese. Dianna had the Angel Hair Pasta with chicken in a "Pink Sauce" combination of Alfredo and Tomato sauce. A great gastronomical experience.

We then made our way to the Denton Square with its awesome Courthouse. One of the most architecturally beautiful Courthouses in Texas. W. C. Dodson was commissioned to design the Romanesque style structure which ultimately cost the County of Denton $150,000, small by today’s standards but a sizeable chunk of change for the time.
I had signed us up for the Ghosts of Denton haunted walking tour of the Square taken around by noted "Ghost Lady" Shelly. Shelly explained to us that the original plot of Denton Square was six lots on each side of the square which could be bought for $25 each. For many years the County Courthouse moved from place and the current site of the 1896 Courthouse was...well a dump. It was a dirt lot that people would cast aside stuff they didn’t need. 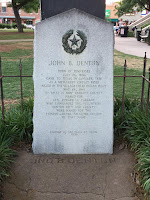 Little known fact....there's a dead guy buried on the Courthouse lot. Yes, John B. Denton , the town and County namesake, was reinterred there at the southeast corner. John died in 1841 after the Battle of Village Creek, the last known Indian attack on Texans in adjacent Tarrant County. Yep, that's right....way down by Arlington, nowhere near what's now the Denton County line. John was laid to rest in a makeshift grave near the river but was rediscovered and, in 1901, some folks decided John needed to be replanted in Denton, the town and County that took his name to honor his service in the Republic of Texas. So you can imagine his confusion at being in a place he never frequented in life. Thus he is occasionally seen in his long rider duster and breechloader rifle wandering the square trying to figure out how he got there. 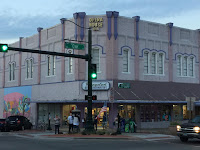 The only really active place we went to is the old Opera House. Built in 1899 for $25,000, it was built from the bricks from the condemned 1870s Courthouse. Now a huge bookstore, Recycled Books and CDs, it once housed a very large auditorium. in the far back of the store was the stage which is now a second floor loaded with book shelves and books for sale. When it was the Opera House, an actor had committed suicide and died in that portion of the Theater. Since then, many spooky things have occurred to patrons and employees of the store. Worse yet, the owners decided to create loft apartments on the second floor above the bookstore. The owners have had a tough time doing remodels. Usually the crews don't come back after the first morning of work with tales of tools and other objects being flung about. The tenants have similar tales of weird occurrences and don’t usually stay long.

Shelly is obviously full of great tales of early Denton but the tour really suffered from the new upstairs patio restaurant/bar  LSA Burgers. The band was really cranked up and though they were on the south side of the square, even if you were on the north side with the Courthouse between you and the bar, the music was so loud, you couldn't hear yourself think. It kind of downgraded Shelly's talk and descriptions. But a tour well worth taking. It was still quite hot in the square and we were ready for another Beth Marie’s Ice cream. 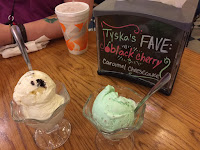 Back to The Old Irish Bed and Breakfast for a good night’s sleep under the watchful eye of Greystoke (he kind of grows on you). Back then to home and hearth (and lawn maintenance). I would recommend the Old Irish Bed and Breakfast if you want to stay local or just want a little fun getaway....well and there's the cute Alpacas to pet.
Posted by Nick Saraceni at 7:36 PM