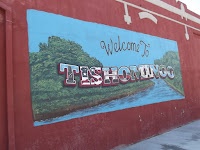 In late April we decided to take another trip north to the land of the Chickasaw, southern Oklahoma and our friends, the Fortson’s. The trip is always scenic but lends itself better to a rather circumlocutious path (look THAT up Dale). Although one might choose the I-35, it’s much more fun to get off the beaten trail (and avoiding the many careening 18 wheelers) and drive to the backroad gems. 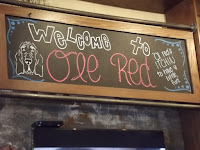 One such gem is the  Ole Red restaurant in downtown Tishomingo, Oklahoma. There singer Blake Shelton has built a cool restaurant/music venue on Main Street. There are two others, one in Nashville (of course) and Gatlinburg, Tennessee. It’s a neat little place named after the song “Ol’ Red”. Ol’ Red is a song written by James Bohan, Don Goodman and Mark Sherrill. Originally recorded by George Jones, Shelton did a version in his 2002 debut album and “The Voice” star credits it as his signature piece which had a significant impact on his career. Interestingly, nobody checked the spelling when they did the signs and menus. 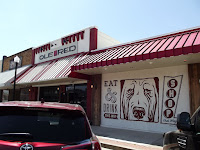 Tishomingo as you may know, is the County Seat of Johnston County and was the Capitol of the Chickasaw Nation from 1856 to Statehood in 1907. It was named for Chief Tishomingo who died on the Trail of Tears in 1838. Prior to 1852, it was known as Good Springs because several springs flowed into the Pennington Creek nearby making the spot a good respite on the trail between Fort Washita and Fort Arbuckle.

Shelton was born in Ada, Oklahoma, a short distance north of Tishomingo, but Shelton has made it a point to invest heavily in this part of Oklahoma to improve the economy and lives of his fellow Oklahomans as evidenced by his charity Concerts after several tornados struck the area in the past few years.

Ole Red is one of those efforts. It is a classic music venue with several local and national acts having played there as well as Blake himself but he has also supported the surrounding shops to increase traffic and bring the tourists in. It certainly has spruced up the Main Street area and created many jobs for the locals.

The menu is well rounded with everything from Fried Green Tomatoes to great burgers and sandwiches to a Coffee-Crusted Pork Chop (I’m sure it’s delicious……). Dianna had the Basic Cheese Burger and I had The Bull. 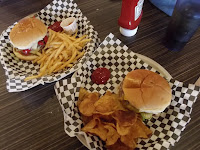 We did leave room for the Ole Red Ice Cream Sandwich oversize cookie dessert embeded with Lucky Charms. The Lucky Charms thing has to do with a prank pulled on Blake when he was on Jimmy Fallon's show. Blake made the mistake of telling Jimmy that his favorite cereal when he was young was Lucky Charms. As a joke, Fallon ended up sending Blake numerous boxes of the cereal and it became a standing joke between the two. Of course, General Mills, the maker of Lucky Charms took on the idea as a new way of hawking their product and have also sent boxes of their cereal to like minded celebrities as well. 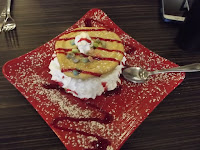 So, if you find yourself wandering around southern Oklahoma, cruising along U.S. 377, stop by Ole Red and catch lunch, dinner or a show.

Having filled our bellies, we continued north toward our destination, Shawnee, Oklahoma. We have been to Shawnee several times to stay the night while visiting our longtime friends the Fortsons. Gerry is now 84 years young and one of three surviving members of her High School graduating class. The town of Tecumseh, Oklahoma has not changed much since those days with a stable but withering population in Potawatomi County. The area was opened for settlement in 1891 as a result of the Land Rush into what were the reservations of the Sac and Fox, Kiowa, Kickapoo, Shawnee and the Potawatomi Indian Territories. The Nations still exist along with their gaming Casinos. 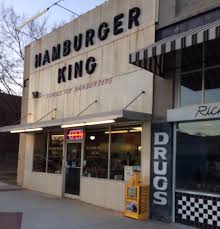 One of Gerry’s (and our) favorite things to do is take a short ride into Shawnee and get lunch at Hamburger King on E. Main Street. The old Main Street is making a come back with new store fronts and sidewalks with a few of the old stores, like Hamburger King, it’s anchors.

I love this place for several reasons, the first is the old fashioned (I can’t believe I’m using that term) style hamburgers and service. They still use the table phone ordering service dating back to the 50s (ok…1950s in case you didn’t know). All the food is made to order and the large patties and buns complete the package. Again…make room for a slice of their pies. We had the Classic Cheeseburger with the wedge fries and, of course, the pie. Never had a bad meal there. 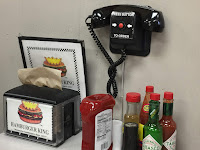 Recalling that Gerry used to come there back in her High School days…..class of 1947 (the original building is now part of the Middle School campus), I asked her what she thinks about while she’s there. She says she always thinks back on those days and can still see her friends “cruising” down Main Street showing off their cars. She still imagines it as it once was, seeing the bustling street, busy shoppers and decorated store fronts of that earlier time. Her face brightens when she begins to relate a story of an old school field trip or war time recollection of her days in Tecumseh. It saddens me a little after hearing the stories. It’s a different thing to read stories in a book than to hear it in person. You can’t recreate the emotion or expressions of someone who can bring the past to life. Like many of the people I have met and written about, she too is a resource to the past we will unfortunately lose some day. 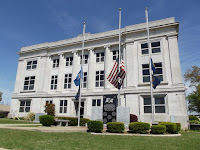 We only spent a couple of days in Oklahoma and only got to one County Courthouse we hadn’t been to. In Madill, Oklahoma, there is the Marshall County Courthouse and County Seat. The county was created at statehood in 1907 from the former Pickens County of the Chickasaw Nation. It was named to honor the maiden name of the mother of George Henshaw, a member of the 1906 Oklahoma Constitutional Convention. 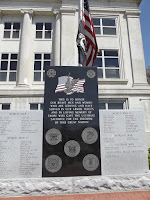 We here in Frisco, Texas have a connection to Madill’s creation as a center of trade and commerce. Railroads came to the present-day Marshall County in 1901, when the St. Louis, Oklahoma and Southern Railway acquired shortly there after by the St. Louis and San Francisco Railway, known as the Frisco, constructed a north-south line. The following year, the St. Louis, San Francisco and New Orleans Railroad (formerly the Arkansas and Choctaw Railway) laid tracks from east to west through the area. This line was sold to the Frisco in 1907.

The Courthouse, built in the simple Capitol Style of that WWI era, has a recently erected War Memorial listing local residents who have died in support of our Nation. All the County Offices are able to be housed there for it's approximately 16,000 residents within its 427 square miles. 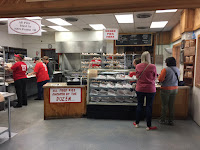 Among Marshall County’s famous sites are Fort Washita the former United States military post and National Historic Landmark located in Durant, Oklahoma. Established in 1842 by General (later President) Zachary Taylor to protect citizens of the Choctaw and Chickasaw Nations from the Plains Indians. It was later abandoned by Federal forces at the beginning of the Civil War. Confederate troops held the post until the end of the war when they burned the remaining structures. It was never reoccupied by the United States military. 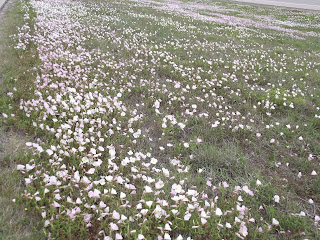 Whatever you’ve heard about Oklahoma (yes…tornados are a thing here), it is very scenic and though mostly flat, has some of the nicest vistas while driving (well...and there's the Arbuckle Fried Pie store in Arbuckle a convenient exit off the I-35). As well as the passing of the beautiful roadside wildflowers. We also need to get back to Oklahoma City soon. I learned they have recently completed a renovation of the Oklahoma City Bombing Museum and historic site. That will be a worthwhile trip as well.
Posted by Nick Saraceni at 10:25 PM