As I have explained, the process of divining a path to the hinterlands of this great State is mired in deep thought and analysis as to which place best exemplifies a region or culture. Not really, it always boils down to whether I can get the wife on-board and primarily if the weather will hold up.

The Summers in Texas can even try the patience of the Texas horned lizard (Phrynosoma cornutum, Texas State Reptile) of West Texas. It’s not uncommon for most of North Texas August days to be in the 100’s. Forget that nice dry Santa Ana stuff in the West. This always comes with a major dose of humidity. You know, that sweat-dripping-down-the-back-of-your-shirt humidity. I look out on the plains of Texas and always wonder how those ranchers and dirt farmers hacked it pre-air-conditioning. They were better men (and women) than I could ever be.

Thus we found ourselves in the midst of a cold snap (well….it was in the low 90’s after 17 consecutive days of over 100, with heat indexes up to 112 in some of North Texas). And so, the wife and I made a trip to the Rose Capitol of Texas, Tyler, Texas.

Tyler was unique in that we did this trip on a Friday not the usual weekend hop. I get a lot of grief for waiting until Sunday to go on our treks. As I’ve mentioned earlier, in Texas, on Sundays, they usually roll up the streets and everything else because of the religious influence on all things Sabbath (not the band). This becomes more evident in the more rural areas, places I refer to as the stitching of the Bible Belt.

Saturdays are the best because the Town Squares are populated with residents and visitors hitting the eating and watering holes and most of the boutiques are open for perusing. The wife loves to meet with “her people” (folks who delve into the black arts of crafting, sewing, and general interior decorating with Christmas lights and the much sought after door wreath). They light votive candles to fabric gods and make a pilgrimage to the owner’s most recent creation altar. Fun times.

Sundays can be ok, but some towns can resemble a ghost town. Think the final scenes of “On the Beach (1959)”. But sometimes it just works out that way and we (well…Dianna) are often disappointed when we arrive ready to party and are greeted with window shutters slapping in the breeze and the occasional tumbling tumble weed rolling by (I kid you not, actually saw a tumble weed roll through the streets of downtown Wichita Falls, Texas, November 2009).

Tyler is a city in and the County Seat of, Smith County, Texas. The city is named for President John Tyler in recognition of his support for Texas' admission to the United States. Tyler has been nicknamed the "Rose Capital of the World" because of its large role in the rose-growing industry; about 20% of commercial rose bushes produced in the U.S. are grown in Tyler and Smith County and more than half of the rose bushes are packaged and shipped from the area. It has the nation's largest municipal rose garden and hosts the Texas Rose Festival each October, which draws more than 100,000 spectators. 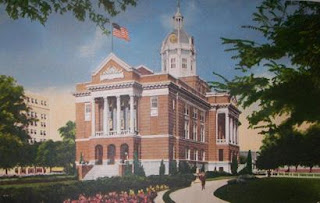 Now Tyler is the County Seat of Smith County but no longer has it’s historic Courthouse at it’s center. After a series of three log cabins over five years served as the county courthouse, the cornerstone was laid in December 1851, for a new courthouse, Tyler’s first brick structure. The two-story building was 40 feet by 70 feet and sat in the middle of the square. In 1876 a third story was added, as well as a clock tower that never had a timepiece installed. Unfortunately, uncharacteristically of Texas, a decision was made in 1955 to remove it to be replaced by a more modern structure, which would then allow Main St. to continue through the Town Center where the old Courthouse once stood. I think you’ll agree….bad idea. The new building is stark and very pedestrian. A classic “government” building with no heart or soul. 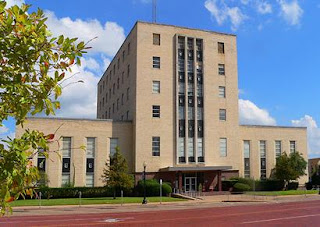 We (ok..I) was hungry and we walked the square until we found a great Mexican place, Don Juan on the Square. The veggie enchiladas (yes, I’m watching my cholesterol) were awesome. 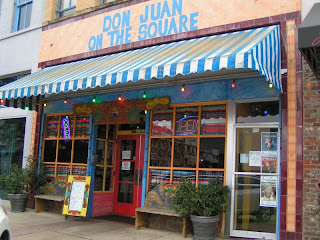 To walk off our meal we again ventured forth around the square and where the once beautiful Courthouse once stood, was a great little plaza dedicated to Community leaders and a very touching memorial to Crime Victims of Smith County. Also a very nice Law Enforcement Memorial to those Smith County (and Federal) Peace Officers who lost their lives in the Line of Duty. 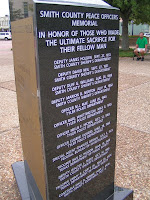 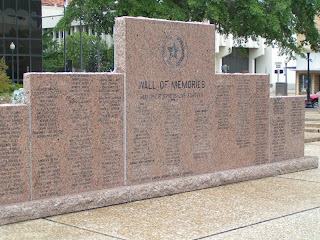 Off the square was the Smith County Historical Society housed in the Carnegie History Center. It was kind of a two-fer in that the building was formerly a Carnegie Public Library and when the City Library expanded to a new building across the street, the Historical Society took it over to house a small museum and their offices. 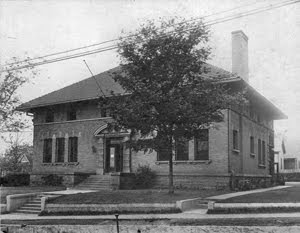 Some of you might know that Andrew Carnegie immigrated to the United States in 1848 and became a powerful businessman in the American steel industry. He spent his last years as a philanthropist, which included building over 2,500 libraries worldwide. Tyler received a $15,000 donation from Carnegie to build a new home for its library. It was completed in 1904 and remained the City Library until 1979.

Inside was a neat collection of memorabilia of early Tyler and Smith County including an exhibit of Tyler’s contribution to the Civil War (TWONA) effort. Smith County was apparently a strong supporter of the Confederacy and slavery (think major agriculture hub). They provided a large number of volunteers to the Army of Northern Virginia as well as defending the Texas frontier from those pesky Native Americans foolishly trying to maintain dominance on what was their home turf during the war years.

As we know, the Confederacy, contrary to the Union, was handicapped by not having a large industrial base before the war. So some of Tyler’s manufacturing companies went to a wartime footing and produced arms and ammunition for the Confederacy. Being so far from the battle lines allowed Smith County to become a major supply point right up to the war’s end.

Because most of the big firearms manufacturers were in the North, the Tyler arms and munitions industry took to making copies of existing sport and military rifles. Some converted weapons were even bored out so they could use standardized ammunition. Because of the shortages of materials, they had to take shortcuts such as only using a single screw to secure the butt plates. This feature still defines the few examples of remaining antique firearms made by Tyler from those days. Part of the exhibit demonstrated how to assemble a rifle cartridge for a muzzle-loading flintlock. Lots of measuring, pouring powder and wrapping of the paper cartridge. Very tedious and dangerous work.

As we made our way back to the car, we came upon another icon of early Texas life, the Independent Order of Odd Fellows (IOOF). You can find evidence of this fraternal order in most Texas towns. Either as a name placard on a building or, like this one, an actual operating Lodge. 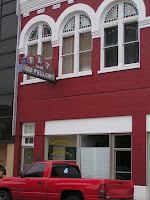 Thomas Wildey, born in London, England, January 15, 1783. He joined the Odd Fellows in England in 1804 and is the founder of Odd Fellowship in North America.

When Thomas Wildey came to America in 1817, British citizens had to keep under the radar and were still pretty unpopular in the States because of the War of 1812. Wildey missed the camaraderie of the IOOF and advertised in a Baltimore newspaper to determine if there were any other Odd Fellows around (you could go on for days making jokes off of that).

On April 26, 1819, Wildey and the four men who responded to the advertisement formed the Independent Order of Odd Fellows in North America, dedicating the Order to achieve philanthropic goals. Other Englishmen who were Odd Fellows had grouped in the states along the Eastern Seaboard, and Wildey gathered them all into the newly formed fraternity. He traveled widely to set up lodges in the most recently settled parts of the country. At the time of his death in 1861, there were more than 200,000 members of the Independent Order of Odd Fellows in 42 states.

The first lodge of Odd Fellows in Texas was instituted in Houston, as Lone Star Odd Fellow Lodge Number One, on July 25, 1838. The Odd Fellow Fraternity grew from there to many Texas towns. They are still referred to as Odd Fellows and Rebekahs (think Masons-Shriners/Eastern Stars) and have been a part of the Rose Parade on New Year's Day since 1955.

Even today, they are still involved in several events and charities like the Arthritis Foundation, Disaster Relief – Hurricanes, Tornados, Flooding, 9/11, SOS Village, they do an annual wreath laying at the Tomb of the Unknown Soldier, Wilmer Eye Institute at John Hopkins University, and United Nations Education Pilgrimage for Youth. They have about 10,000 lodges worldwide.

Tyler is also a kind of Winery Center for East Texas and has an assortment 6 wineries within a short distance of downtown Tyler. We didn’t get a chance to try any but my Texas Wine Country Passport was burning a hole in my pocket as we drove around. 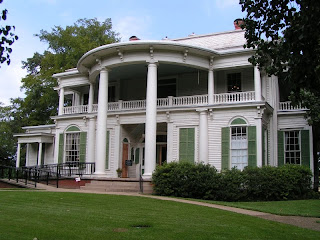 There are several historic homes in Tyler to tour but a must see is the Goodman-LeGrand house and museum. This classic Antebellum style home was built originally as a single story home by Samuel Smith in 1859. When the Civil War (TWONA) came round, Smith sold it to a guy named Franklin Gary. The home was bought and sold several more times until it ended up with Dr. William Goodman, a physician and Civil War field doctor, in 1867. He had three children who remained in the home until the last surviving daughter, Sallie Goodman-LeGrand died and donated it and the surrounding gardens to the City of Tyler in 1939.

It went through a series of remodels from 1880 to the last one in 1926 changing it from Antebellum, to Texas Colonial (Italianate), to a Greek Revival style as it looks today. The really cool element was that the home’s interior pretty much looks like when the family lived there with original furnishings, paintings, glassware, and hand-painted antique dish sets dating back to the 1880s. There’s an amazing display of Dr. Goodman’s medical equipment from the Civil War period and lots of Medical books from that time as well.

The home and the nine acres of land around it was turned into LeGrand Park by the City of Tyler and is open to the public free of charge (donations accepted) seven days a week. It’s part of an historical home tour and, during Christmas, is covered with Christmas Lights for the season.

After reflecting over the highlights of our visit over Cranberry-Limeades at the SONIC drive-thru, we bid East Texas goodbye, pointed our Nissan northwest and, keeping Tyler square in the rear view mirror, returned to our homestead to plot and plan for our next sojourn.
Posted by Nick Saraceni at 1:04 AM