As previously stated, on most weekends, I Shanghai my wife (like Captain Ahab dragging off a Seaman destined for the Pequod) and drive to new places to learn more about our State. We’ve been together now for 35 years. Early on, I was able to cobble together a profile of my wife. I can tell you, as the years have progressed, we are no longer as open minded about things as we used to. Camping has been replaced by Spas, thread counts have to be in the thousands and meals are not to be consumed standing but plush booths are acceptable. God forbid if anyone within a 50-mile radius is smoking. Oh yeah, screaming kids in restaurants too.

Because we have this close bond, I have often sensed she is not always a willing participant but humors me into believing she is so we can spend more quality time together away from the drudgery of workaday problems. I really believe it may be more a way to placate me so she doesn’t feel guilty when she’s collecting the life insurance check.

The process in getting out must be described. Something I like to call “our little dance”. It begins on a Saturday or Sunday after she returns from doing some of her errands. I approach her cautiously to check the weather and once I’m confident she’s in the right frame of mind (and there are no sharp objects in reach), I ask if she’s up for a trip. Being the real trooper she is, she generally agrees and then begins the second phase of the dance.

My wife, Dianna, has a pre-drive ritual, which would rival a Space Shuttle launching. There are books and magazines to be loaded, iPhone/iPods plugged in to cigarette lighters, earphones, snacks, juice bottles and handi-wipes to clean and cool the skin. After relocating her sunglasses for the fifth time, we stow the checklist, the Gantry is rolled back and we can begin the flight. Then there is the reiterating of the itinerary so she can update her iPhone App that logs our journey for future generations. And so, we head for Weatherford, Texas.

In 1855, Parker County was created by the Texas State Legislature and named for pioneer and State Representative Isaac Parker. Parker was the uncle of Cynthia Ann Parker, a little girl who was taken from her home by Indians during the Texas Revolution. Cynthia Ann lived among the Comanche from 1836 to 1860 and became the mother of Chief Quanah Parker, the last leader of the Quahadi band of Comanche before they surrendered and moved to reservations in Oklahoma.

Later, when she was overtaken in flight by Texas Rangers, Col. Isaac Parker who recognized her as his long-lost niece, brought her back to her white family. Cynthia Ann never took to being among the white race and began a very sad series of failed attempts to return to her native home and family. She was often locked in her room over the next several years so she wouldn’t escape. Often refusing to speak or eat, she died in 1870 of influenza at the age of 43. 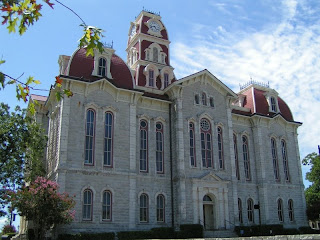 In the early 19th Century, the State legislature enacted a rule that the County seat of a County had to be within 5 miles of its geographic center. The Parker County Courthouse is located in the exact geographical center of the County. Interestingly, this Second Empire style courthouse, like most Texas town squares, usually resides on an island of lawn and surrounded by monuments and parking. At some point, it was determined that this Courthouse should be the focus of a traffic circle like some sort of Hot Wheels track around a tree at Christmas. I’m sure it’s an efficient means of getting around, but I think it really detracts from what is a beautiful Courthouse.

Named by the State Legislature as the Peach Capital of Texas, Weatherford and Parker County growers produce the biggest, sweetest, juiciest peaches in all of Texas. Each year, around July, the Peach is celebrated at the Parker County Peach Festival. They shut down the town square (and the traffic circle) and it becomes Weatherford's largest one-day event.

While in the Town Square, we were (ok…I was) hungry and took breakfast at The Weatherford Downtown Café just across from the Courthouse. Britton and Jamie Schweitzer have a great place with lots of seating, old photos and wall paintings to keep you entertained while waiting for a sumptuous dish, in this case, a very filling breakfast burrito. On the recommendation of the server, we saved room for the chocolate pie dessert. Wow, is all I can say.

The Town of Weatherford was named for the first State Senator for this district, Jefferson Weatherford of Dallas an ardent secessionist at the time of the Civil War (TWONA). According to his cousin, like most politicians, Senator Weatherford never set foot in the town. The first settlers had arrived less than ten years earlier. There were many Native American attacks between the years of 1846 and 1874. There are several headstones in Parker County that read, "Killed by Indians." 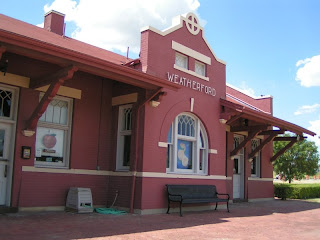 The railroad arrived in June 1880. The Santa Fe Depot (which today houses the Weatherford Chamber of Commerce) was built in 1908. Built under Jim Crow laws, the Depot had waiting rooms segregated and separated by the ticket office.

Other historical notable figures have helped shape Weatherford. Mary Martin, internationally known Broadway star, renowned for her portrayal of Peter Pan. Her son, Larry Hagman, became forever immortalized as the villainous J .R. Ewing, of the television melodrama, Dallas. Former 56th Speaker of the House Jim Wright grew up in Weatherford. In 1954, he was elected to Congress from Texas's 12th congressional district, based in Fort Worth but also including Weatherford. During his term, he got beat out of the Democratic Leadership by one of the new guys, Lyndon Johnson.

Weatherford has a rich western heritage filled with colorful characters and personalities. Legendary cattle drivers Oliver Loving, Charles Goodnight, and Bose Ikard are just a few of the notorious cowboys that make up Weatherford's history. Oliver Loving is buried in Weatherford’s Greenwood Cemetery. After being attacked by Indians in New Mexico in 1867, Loving’s dying wish to his friend, Charles Goodnight, was to be buried in his home, Parker County. Goodnight brought the body back six hundred miles by wagon for burial. The story is the inspiration behind Texas author Larry McMurtry’s novel, Lonesome Dove.

A year earlier, Goodnight had invented the first chuckwagon, which catered to cowboys on a cattle drive that would later become known as the Goodnight-Loving Trail. Boze Ikard, who served with Goodnight and for whom the McMurtry character “Deets” was modeled, was also laid to rest in the Greenwood Cemetery.

Weatherford was the home to British portrait artist Douglas Chandor who moved to Weatherford and married Weatherford native Ina Kuteman. His portrait work is kind of a Whos’ Who for anybody of significance in the late 30’s, 40’s and 50’s. Five are part of the Smithsonian’s National Portrait Gallery. Known internationally for his portraits of the rich and famous including Queen Elizabeth, Winston Churchill, Eleanor and Franklin Roosevelt, he designed and built a beautiful botanical garden known as "White Shadows" which is now owned and operated by the City of Weatherford. 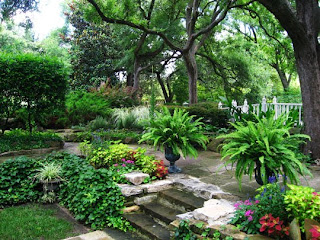 Though the temperature hovered around 105, the wife and I made our way to the home and walked the garden using the self-guided tour. We were the first to arrive and were fortunate enough to hook up with one of the docents on her gardening rounds who provided an intimate tour of the house and neat tidbits about the grounds (and general gardening tips for our homestead). The 3.5 acres of land was donated by his wife’s family and Chandor set out to build a home and garden as part of the estate. Both he and the Mrs. really liked Chinese and old English style gardens and there are elements of both in the garden. 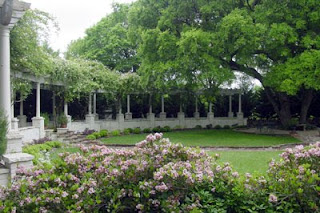 To build his garden, Mr. Chandor recycled many materials. You can see old Coke and 7-UP bottles, clay sewer pipes for roof tiles and colored marbles as part of the various designs and lots of used bricks. It is said that Mr. Chandor told others he, “never saw a brick I didn’t want to break” to create a design on a pathway or a water feature. The flowers, colors and water features are magnificent. A must see.

Cool story was that Chandor always wanted to construct a “mountain” as part of his garden. He told this to one of his portrait subjects, former Governor James Cox of Ohio (1913-1921). After seeing the completed portrait, Cox cut Chandor a check for the materials (kind of like stimulus money, Cox was after all a Democrat) to complete his beloved mountain. Chandor died January 13, 1953 at the age of 56. Soon after, his wife Ina Chandor opened the gardens to the public for a fee of $1.00. She used the proceeds to help absorb the high costs associated with the gardens’ maintenance. The gardens were drawing several thousand visitors annually. Ina joined her late husband in 1978, and the gardens and home fell into disrepair. A local family, Melody and Chuck Bradford, purchased the house and garden in 1994 and brought it back to it’s original glory. They then sold it to the City of Weatherford who now run it as a museum and event destination for weddings, private and public gatherings.

The house was just as intriguing. Although built in 1936, it is an interesting mix of Tudor style, Asian and a little Art Deco thrown in. There were many features for cooling off the place in the hot Texas Summers (pre-air-conditioning) like rollback roof-peak venting to move air through the house. His workspace was a huge vaulted ceiling ballroom-size room. Funny thing was he would only work at one end which has a very tall window (the large window visible on the right), affording the only light. There, in this small corner of the room, would he sit his subjects and paint. 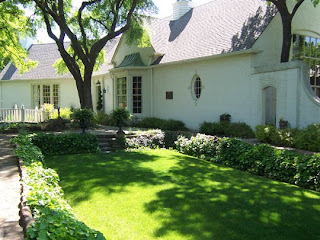 We also discovered there is also a driving tour of some of the best looking Victorian style homes throughout Weatherford which we followed on the way out of town. Worth doing but not in the West Texas heat of the day. So, now, hot and dripping sweat from our trek through this beautiful home and garden, we poured ourselves back into the car and, air-conditioning blasting, made our way back out the I-20 for home.
Posted by Nick Saraceni at 12:37 PM