Corsicana, Texas was an interesting stop both historically and gastronomically. Corsicana came about in 1848 when it was chosen as the county seat of the newly formed Navarro County (to encourage more settlement and organization, the Texas Legislature enacted a bill in the 1800s stating that with a petition consisting of only 150 names, a county could be created.). When searching for a name, one of the founders, Jose Navarro (yes, the namesake of Navarro County) suggested the town be named after the island of his father’s birth, Corsica. Jose had been given the honor of naming the town because he had been one of the Father’s of the Texas Revolution releasing Texas from Mexico and a signer of the Texas Constitution. 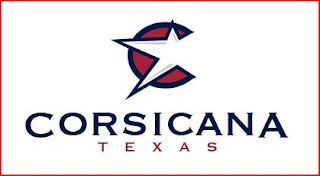 Since it was founded, Corsicana has been an important agricultural, commercial, retail and transportation center in North Central Texas. Corsicana began as a significant railhead at the confluence of three major railroads and had a major impact of the Texas commercial cotton industry.

Corsicana grew rapidly in the late nineteenth and early twentieth centuries, mostly due to the prosperous cotton industry. Because of the success of North Central Texas early cotton barons, Navarro County quickly became part of the nation’s largest cotton-producing area during the later 1800s. Cotton played a very important role in the early development of Corsicana, but it’s the accidental discovery of oil that put it on the map.

By the early 1890s, the rapidly expanding city had outgrown its water supply and the following year civic leaders formed the Corsicana Water Development Company with the aim of tapping a shallow artesian well in the area. Drilling began in the spring of 1894; but instead of water, the company hit a large pocket of oil and gas. The find, one of the first significant discoveries of oil west of the Mississippi River, led to Texas's first oil boom. Within a short time, nearly every lot in the town and in the surrounding area was under lease, and wells were springing up all over. The first oil refinery in the state was built in 1897. The discovery of oil transformed Corsicana from a regional agricultural shipping town to an important oil and industrial center. Corsicana became one of the first Texas oil boomtowns, and one of Texas' wealthiest cities. The area still has the longest continuous oil flow in Texas, with a total production in excess of 200 million barrels since 1895.

Texans were always on the cutting edge of the early transportation industry. Corsicana was no exception. Electric Interurban Railways, a standard railway passenger car propelled by electricity instead of steam engines, ended the use of horse or mule drawn trolleys in urban parts of Texas. In 1912, a company called the Texas Traction Company, purchased a line built by the Dallas Southern Traction Company from Dallas to Waxahachie. In 1913, that railway was built on to Waco and a fifty-six-mile line from Dallas to Corsicana was completed. In 1917, the Texas Traction Company and the Southern Traction Company merged to form the Texas Electric Railway Company, the largest interurban railway in the South, with more than 200 miles of track. But, with the advent of automobiles, most of the services ended by the late 1940s. 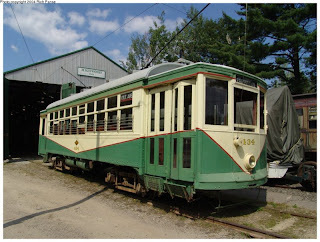 Ok, I can sense your eyes are rolling back, let’s talk about food. We were (well...I, was) hungry and we searched for a place to eat. It was, after all, Sunday and nothing was open. You must understand that most of Texas is a huge notch in the Bible Belt and few businesses are open on Sunday. If they have Sunday hours, most won’t operate until after the Churches let out after around 10 a.m.

Well, lo and behold, there was a very good Mexican restaurant on the east side of downtown called Fiesta Grill on N Commerce Street. A very extensive menu with lots of local fare for the large Hispanic population. Family owned and very busy. 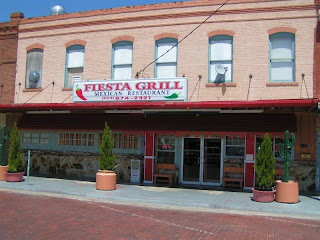 To find dessert, we found Collin Street Bakery. The bakery was established by August Weidmann in 1896 using old world recipes of the early German immigrants who are well represented in early Texas history. What started out as a place to get fruitcake (yuck!) has morphed into a huge selection of breads, cakes, cookies and just about any sweet dessert you can think of. When word got out about the bakery, folks from all over, including Will Rogers, Enrico Caruso and even John Ringling and his troupe made a pilgrimage to sample Augusts’ stuff. The wife and I couldn’t resist, we too walked away with a bunch of goodies to munch on the way home. 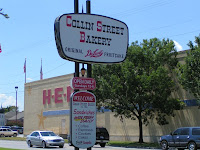 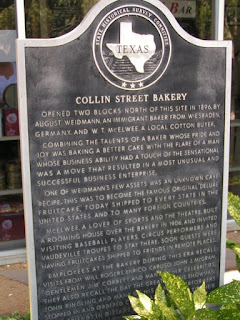 If you like chili, you may be familiar with Wolf Brand Chili sold in many grocery stores around the U.S. In 1895, Lymon T. Davis had been a trail cook for cattle drivers and had developed a recipe for chili he made for his hungry charges. It was quick, easy and stuck to your ribs while you were droving cows to the meat packers up north. Feeling he had something special, he came to Corsicana and set up shop with his chuck wagon outside the Blue Front Saloon. A bowl was 5 cents. 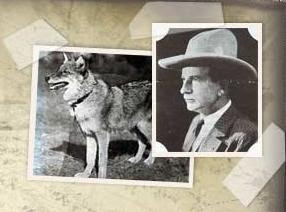 By the early 1920s, the chili’s great-tasting reputation had spread, so Mr. Davis began canning the chili. At the suggestion of a local photographer, Mr. Davis’ pet wolf, Kaiser Bill (Yes....you all knew that was a reference to Kaiser Wilhelm of Germany), was selected to grace the label. Suddenly the chili had a name, Wolf Brand, which became a Texas staple for many.

As discussed in prior posts, the city and for that matter Texas, has often fallen on hard times. The Civil War (TWONA for the Southerners) put a virtual halt to the cotton industry. Corsicanans were slave owners (remember the cotton) and were whole heartily in support of the Confederacy and sent most of it’s men and boys off to fight in the Army of Virginia with Lee. When the war was over, Corsicana luckily avoided the violence and bitter strife of Reconstruction and quickly developed economically as oil became more important than cotton in the region. Then the Depression came along and the city shrank under the strain of that period until WWII came along and brought back the oil industry to it’s peak. Some historians credit the State of Texas with fueling the entire war effort and this wild pumping may be the underlying reason for almost exhausting it’s great wealth of oil reserves.

Come to Texas and you will find that each of it’s 254 counties has some type of central Courthouse  in it’s County Seat. For many counties, their Courthouse was a central feature and source of local pride. Many were well financed and rather ornate. Most were built between the late 1800s to the early 1900s. Many designed by well-known icons in the field of architecture and are nationally recognized as classic examples of various styles from that era. In almost every case, you will find that several of these Courthouses were, at some point, destroyed by fire and rebuilt in the same spots. Corsicana, like many places in Texas, had a total of four built between 1853 to 1905. 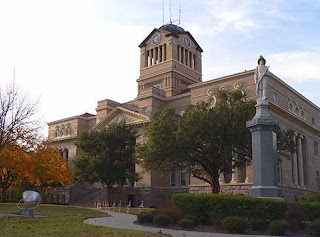 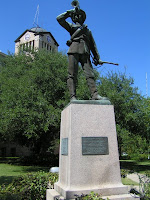 For the tourist and frustrated historian (did I say that out loud?) what most Courthouses do have is often an extensive collection of historical markers, which are windows into their community’s past. There is always the obligatory memorial to the TWONA usually raised by the United Daughters of the Confederacy (UDC). But Corsicana has an extensive and opulent memorial to all the wars since, including a memorial to the War on Terrorism. There was also a rather neat Peace Officer Memorial for Navarro County Law Enforcement and one to Firefighters too. 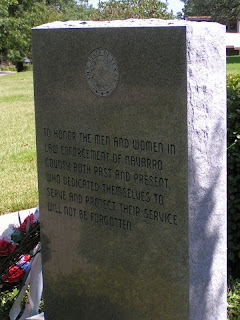 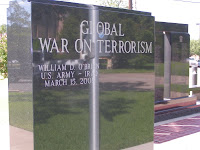 Recall from an earlier post that Texans revere all who have served their country and make no apologies for that reverence unlike some of their Yankee cousins who couch some of that enthusiasm with political correctness.

Though it still remains a commercial and transportation center for the area, it has really declined since the late seventies. It’s once colorful downtown harkens back to Main Street USA of the 50s and 60s, but is now just a series of empty storefronts. We took the self-guided driving tour of some classic Victorian era homes from it’s glory days still present in the northwest quadrant of the city but it’s clear Corsicana needs an injection of new blood to revitalize their historic downtown. As many communities in Texas have experienced, when the great Texas oil bust occurred, Corsicana, like Texas oil barons, and their historic importance, receded back into the history books.
Posted by Nick Saraceni at 10:49 PM