It was your typical Saturday and Dianna was itching to go on a road trip. Really, she was. Lately she has given me indications she actually looks forward to some of our trips...well except the ones when I make fun of her in this Blog.
This was one of those moments. I had completed my meager chores and she was all packed up and ready to go. My daughter asked us where we were going and Dianna chimed in that we didn’t require a destination. Having it be a surprise was part of the fun and added, "That’s how we roll”. My daughter was stunned into silence and her only response was for us to have a good time. At moments like that, I firmly believe she’s doing a mental countdown to the day she has to put us into assisted living. 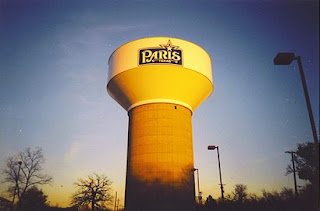 But away we went to Paris, Texas  the County Seat of Lamar County nestled in the northeast corner of Texas, the north eastern edge of the Piney Woods and  a buttress of the Red River holding back Oklahoma. Paris is also the official Crepe Myrtle Capital of Texas.

Local residents like the slogan "Second Largest Paris in the World." Following a tradition of American cities named "Paris", a 65-foot replica of the Eiffel Tower was constructed in 1993 on the site of their Performance Arts Center and adjacent to Paris Junior College, a sprawling campus on the southeast end of town. Paris Junior College (Go Dragons) was established in 1924. It is one of the oldest junior colleges in Texas. 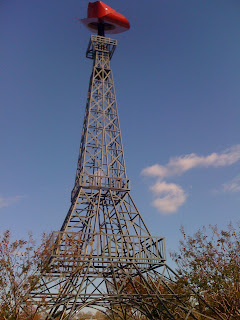 In 1998, presumably as a response to the construction of a 70-foot tower in Paris, Tennessee, to set it apart from the Tennessee tower (like they needed to), the city placed a giant red cowboy hat atop the tower. The current tower is the second Eiffel Tower replica built in Paris; the first was constructed of wood and later destroyed by a tornado. Well, it is, after all, Texas. Both Paris' were forced to surrender in 1999 to a 540-foot copy on the Strip in Las Vegas.
Downtown has seen many makeovers since the town was established in 1826. Like many towns in Texas, because of the heavy use of wood construction and poor fire fighting ability, in 1877, 1896 and 1916, major fires forced the city to rebuild. Historically compared to the Chicago Fire, the 1916 fire was so extensive that it destroyed almost half the town, ruining most of the central business district and sweeping through a residential area before it was finally controlled, resulting in huge property damages estimated at $11 million (in 1916 dollars, that was a bunch). 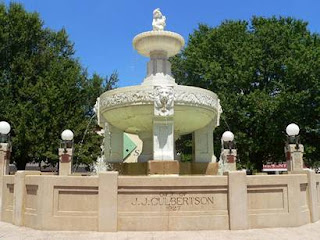 Burned structures included the Federal Building and Post Office, Lamar County Courthouse and Jail, City Hall, most commercial buildings, and several churches. The 1916 fire started around 5 p.m. on March 21, 1916. The exact cause of the fire is unknown. Winds estimated at 50 miles per hour fanned the flames that were visible for up to forty miles away. The fire was brought under control on the morning on March 22 by local firefighters and those from surrounding cities and even the little town of Hugo 30 miles away across the river in Oklahoma. So today, it’s hard to find a building built before 1916. The beautiful Culbertson Fountain in the Plaza square was given to commemorate the rebirth of Paris.
Even the Courthouse (which, interestingly, is not located in the square) was a second build of the original 1897 Courthouse. It was rebuilt in 1917 after the fire in a Classical Revival with Romanesque detail refaced with the marble and pink granite recovered and cleaned from the burned out 1897 Courthouse. The pink granite is from the same quarry used for the State Capital in Austin. 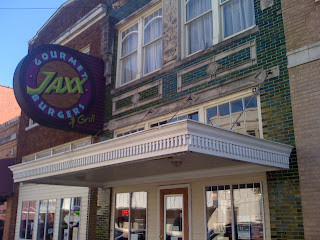 After the drive, walking from the car and taking in the Plaza square, we (well….I) was hungry and headed over to JAXX Burger on Clarksville Street on the edge of the square. Dianna had the Cheeseburger and I had the JAXX Bacon Burger. I’m not sure what they do to their bacon, but they dip it in some kind of liquid brown sugar mix with black pepper. Wow. They had several Gourmet Custom Burgers on the board as well that sounded great too. A must try if you get to town. 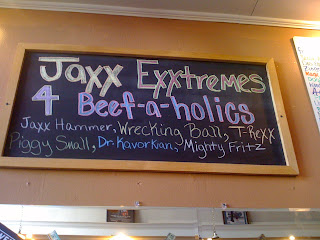 There was some talk that Paris, Texas was the home of the French fry. Well, there is evidence that the modern Hamburger was created in Athen’s Texas . Not to be confused with the low-quality beef the Russian Tartars made from Asian cattle they ground up to make it more edible and introduced to Germany before the 14th century. The Germans flavored it with regional spices and either cooked it or ate it raw (gross!). It became a standard meal for poorer classes and in Hamburg acquired the name "Hamburg steak". Athens is a mere 100 miles south of Paris (Texas...yeah, I know, confusing).
The alledged creator of the hamburger, Fletcher Davis, took his creation to the St. Louis World's Fair in 1904. When Fletcher was interviewed by a New York Tribune reporter about the sandwich, Ol’ Fletcher told the reporter the sandwich was his idea, but said he learned to cook the fried potatoes he served from a friend in “Paris” (Texas). Apparently, the reporter thought Fletcher meant Paris, France (probably the accent threw him), and reported that the hamburger was served with wonderful "french-fried potatoes." The name stuck, and history has forever given the wrong Paris the credit for French fries.
The basic premise that the French fry did, in fact, originate in France, remains solid. In French cooking, frite specifically refers to deep fat frying as opposed to sauté, which is used for pan-frying. There's plentiful evidence that frying potatoes in oil was common in France before 1830.
Several pop historians credit Thomas Jefferson with having introduced French fries to America and is one that just may have some historical foundation. When he was stationed as America’s emissary in Paris (he and Ben were quite the wingmen), he had tasted the delicacy and wrote about it in his journals. Jefferson was also a chronic receipt keeper (I’m sure for tax and travel reimbursement purposes) and there is evidence he had recorded some meals including the little frites. In the French, they are “pommes de terre frites, à crû en petites tranches” (potatoes, fried in deep fat while raw, first having been cut into small slices). Sorry Jane, my French is a little rusty.
There is a fierce debate (if one can be that passionate about French fries, well there is a web site dedicated to the French fry) as to whether French fries were originally thinly sliced fried potato chips. Some early recipes called for cutting them in thin round slices. Some feel it may have been a deviation for the more ritzy restaurants to separate the wealthy patrons from the unwashed. Well, after all, it was around the second French Revolution (1848). When the French say frites, there is only one possible meaning: deep-fried in deep fat, Yum. Funny, I don’t recall Julia Child whipping up a batch on her show.
And there is the whole “Freedom Fry” movement at the beginning of the second Iraq War. As you recall, there was quite a bit of anti-French sentiment after the UN debates of 2003. So if you feel the need to believe the French fry had its origins in Paris, Texas, USA, there you go. 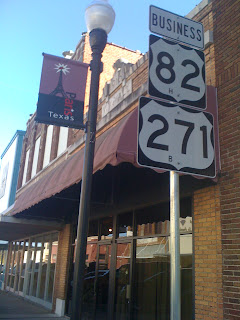 Now we’re going to have to get to Athens and check out the Hamburger myth. Well, that will, of course, require eating there too. It’s a dirty job, but somebody has to do it.
Posted by Nick Saraceni at 11:40 AM