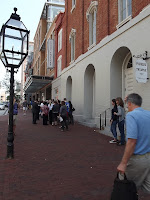 On our third foray into DC, we headed for Ford’s Theater. In 1861 theatre manager John T. Ford leased out the former First Baptist Church on Tenth Street to create Ford’s Theatre. It became a popular stage for theatrical and musical productions. On April 14, 1865, Abraham Lincoln visited Ford’s for his twelfth time for a performance of “Our American Cousin”. At this performance, Lincoln was shot by John Wilkes Booth. Lincoln died the next morning in the Petersen House, a boarding house located across the street. It remained unused for 100 years.


Ford’s Theatre officially reopened in 1968 as a national historic site and working theatre. It is operated through a public-private partnership between Ford’s Theatre Society and the National Park Service. Because it is managed by the National Park Service, it, like all other tax payer supported facilities in DC, is free to enter. But that is the rub.

Because the basic walk-in tour is free, everybody and his grandmother makes the pilgrimmage and the crowds that form in front of Ford’s is staggering. The rather anemic street in front of the theater is choked with tour busses which envelope the waiting tourists queued up on the sidewalk in wave after wave of diesel fumes. Little known factoid, there are only a finite number of tickets they issue per day so get there early so you can get in.

﻿﻿This is true of other popular DC museums like the Bureau of Engraving and Printing. The BEP is only one of two places in America that actually prints our paper money (the other is here in Fort Worth) and is one of the most popular stops for visitors coming to DC. It was peak season hours while we were there (March 26th through August 24th) and tours run every 15 minutes from 9:00 a.m. to 7:00 p.m. Off peak they close at 3 p.m. You literally have to line-up for tickets at a booth on 14th Street at the break of dawn to get in before the tickets run out. Oh yeah, they’re closed on weekends.

The basic Ford’s Theater tour allows you to walk through a basement museum with all kinds of great memorabilia from the period of the Civil War (TWONA) and some of the events surrounding Lincoln’s life and Presidency. Word to the wise…bring a good low-light camera (I did not). Flash is allowed, but most of the stuff is under glass and you’ll get bad pictures (I know).

Then you’re allowed upstairs to the theater and are free to wander around the main seating area and can take all the photos you want. There are other more detailed tours you can buy which give you a tour guide to walk you around but we just walked around and listened to the tour guides as they spoke to their groups. Your ticket also gets you a walk-thru of the Petersen House across the street where you can peer into the room where Lincoln spent his last hours.

Many experts today suggest the poking and prodding of the injury site by doctors most likely dislodged a blood clot which had allowed pressure to build and, relieving that pressure, got the President breathing again. One “physician” actually stuck his finger in the hole to locate the .44 cal bullet (on display at the National Museum of Health and Medicine) still lodged inside the President’s head. And the rocking chair he was sitting in at Ford's is at the Henry Ford Museum in Michigan...who knew. All their efforts failed, he continued to bleed out and Lincoln died in the tiny room aslant the small bed unable to support his full 6 foot 4 inch frame about nine hours later.


Within days of the assassination, the United States Government appropriated the theatre, with Congress paying Ford $100,000 in compensation, and an order was issued forever prohibiting its use as a place of public amusement. Between 1866 and 1887, the theatre was taken over by the U.S. military and served as a facility for the War Department. The building was used as a government warehouse until 1911. The restoration of Ford's Theatre was brought about by a bill passed in 1955 to prepare an engineering study for the reconstruction of the building. In 1964 Congress approved funds for its restoration, which began that year and was completed in 1968.

Ford’s is open from 9 am to 5 pm selling out tickets sometimes by 2 or 3 pm. As a working theatre, they’re sometimes closed for rehearsals and performances, check the website when you know you’ll be in town. 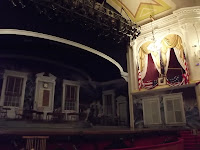 The theatre is very majestic. The 19th century style and construction is very evident and a lot of effort was to bring it to it’s original look at the time of Lincoln’s death.

Trivia alert.... five flags surrounded Lincoln's box in Ford's Theatre, three American flags and two U.S. Treasury Guard flags. The flag Booth tripped over was a Regimental flag of the Treasury Guard calling out "Sic semper tyrannis" (Latin phrase meaning "thus always to tyrants." It is sometimes mistranslated as "death to tyrants" or "down with the tyrant." Supposedly said by Brutus during the assassination of Julius Caesar) as he landed and broke his ankle. 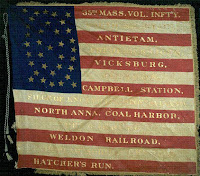 They were a civilian militia formed, like those of other Federal Departments during the Civil War, to help protect the Capital from Confederate attack. Regimental colors (flags) were the focus and rallying point of an infantry regiment in battle. The flags were very large in order to be seen through the dense smoke created by artillery and musket fire by men standing shoulder to shoulder in line-of-battle. However, the flags could not be so long as to drag on the ground or fly in the faces of the men in the second rank; so, they were made almost square.


When the U.S. flag was made in this style, the union (the blue field with the stars) became tall and narrow. The stars were painted with gold because it did not tarnish and stayed clean longer than silver or white. There is no special significance to the stars being in an oval pattern; this is only one of many different patterns used during the period.


My views of Ford’s Theater, like many, are from television specials, movies and documentaries. It is quite unassuming from the outside and somewhat disappointing to see against the “Disneyland” atmosphere of tourists, tour guides and hawkers selling trinkets in shops all over and across the street. But once inside, the noise fades away and you can almost smell the black powder wafting through the room and the screams of the crowd. The original theatre once held 2,400 people but now holds about 600. I may need to add seeing a play there to my bucket list. 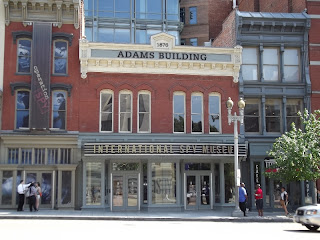 Once we departed, we made our way to one of Dianna’s choices, the International Spy Museum. Ok, it’s not the Smithonian or the National Archives….but it is a very popular spot and kind of cool. It’s privately owned so there’s no photography but you get to wander through three floors dedicated to the history of espionage.

I was a little skeptical but was won over as we got to see actual early and some current technology used by early 007s of all sides to gather intelligence on our perceived foes. The museum takes you from the earliest examples of spying and cryptography (ciphers). Samples could be as common as tattooing messages on the shaved heads of slaves by the Greeks in 500 BC (that had to hurt and probably limited the message length) to the more exotic disappearing inks and digital means. 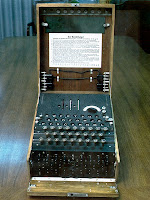 The first known military cipher in history was developed by Julius Caesar. His code was very simple. In fact, you could probably crack it, if you took a bit of time. He just replaced one letter of the alphabet with another and it never changed. As time and technology took over, ciphers went from printed text generated from mechanical devices like the famous “Enigma” German disk system of WWII to the digital age which includes the use of Steganography where text is mingled into the pixels of photos. The hiding of those bits (encryption) now is generated by Supercomputers that fill rooms in the NSA to protect secrets.


There was some cool spy gear like wire recorders and other means for spys to communicate with their bosses. Yes, there was a real Maxwell Smart shoe phone too. Realizing that some of this stuff was fabricated with the 50s and 60s technology of their time, I was truly amazed how things with vacuum tubes and early solid state circuitry were stuffed into everyday items like luggage, attache cases and clothing. Not to mention that we have a million times more computing power in our phones and watches than these spy masters would have dreamed of. Makes you wonder what’s out there today.

What was a little surprising (and a little doomsday dark), was a video presentation at the end which kind of signalled to me the agenda of the owners under the title “New Threats”. It was a 15 minute discussion of how the Cold War wasn’t really over and how our old/new enemies were attacking the American way of life through cyberspace. The video speaks to the contemporary challenges of something they’ve termed “Weapons of Mass Disruption”. They glance over simple cyber attacks like computer hacking of e-mail and websites with a heavy emphasis on how our current infrastructure is dependent on computer networks which are very vulnerable to attacks by our new enemies (i.e. China), Al Qaeda and the other rogue terrorist groups. Very sobering and some in the group viewing seemed visibly worried by the presentation. A very entertaining break in our DC trip.
Posted by Nick Saraceni at 4:31 PM