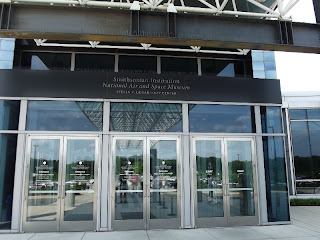 To round out our (my) Smithsonian Air and Space experience, we traveled to Chantilly, Virginia. Chantilly is the long time home of Washington Dulles International Airport and the new home of the Steven F. Udvar-Hazy Center which was opened in 2003 to house much of the overflow of historic aircraft that had been piling up in warehouses and hangars all over the place.


Udvar-Hazy is the leading donor to the National Air and Space Museum Capital Campaign. In October 1999, Udvar-Hazy donated $60 million to the National Air and Space Museum. The entire gift, the single largest donation in the 153-year history of the Smithsonian, was made to go toward construction of the Udvar-Hazy Center scheduled to open in December 2003 on the centennial of the Wright brothers' flight at Kitty Hawk, N.C. 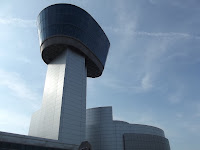 The structure is 2 1/2 football fields long and 10 stories high, and is the home to more than 300 aircraft and spacecraft, including the space shuttle Discovery. Along with state-of-the-art storage and restoration facilities, the center features educational facilities, an archival resource center, a large-format theater, museum stores and restaurants, and an observation tower from which visitors can watch aircraft arriving and departing from nearby Washington Dulles International Airport.


Folks, this thing is huge. Standing on one end of the main display area, it seems to follow the curvature of the Earth. You can’t see the other end until you climb up the elevated walkway, which runs the entire length of the two hangars. Way cool feature. It gets you up about two stories and is handicap accessible so you can look down onto the aircraft, some at eye level. Then there’s all the aircraft hanging from the ceiling in flight configuration as though they were swooping and flying overhead.


There are the treasures of flight like the SR-71 Blackbird, the original Boeing 367-80, which became the commercial 707 passenger airliner, the Concorde is here and the Enola Gay, the B-29 that dropped the first nuclear weapon in wartime.

But the big one everybody was there to see was the Space Shuttle Discovery. It sits proudly and center stage among all the space exhibits in the James McDonnell Space Hangar. Enterprise used to be there but when they retired all the shuttles, it was decided that Discovery would replace it. Discovery had flown the most number of missions (39), put up the Hubble Space Telescope, did the bulk of the heavy lifting to put the International Space Station together and put John Glenn (77) back into space to do research.


For those who didn't know how your tax dollars were being spent, Senator Glenn conducted a series of experiments sponsored by NASA and the National Institute on Aging during the STS-95 mission. The investigations gathered information, which may provide a model system to help scientists interested in understanding aging. Some of these similarities include bone and muscle loss, balance disorders and sleep disturbances. Data provided from Glenn during this mission was compared to data obtained from Glenn's Friendship 7 orbital mission in 1962 (yeah…right, what a boondoggle).

A note about naming of the shuttles. Enterprise, designated OV(Orbital Vehicle)-101, was originally planned to be named Constitution. A letter-writing campaign by Trekkies to President Gerald Ford asked that the orbiter be named after the Starship Enterprise, featured on the television show Star Trek. Ford never actually acknowledged the campaign but liked the idea and NASA made the change.

Enterprise was not a spaceflight-worthy ship. It was designed to only fly test flights within the atmosphere. It did not have the famous thermal tiles to keep it from burning up on re-entry. It was a test platform for the hair-raising final 30 minutes of unpowered gliding back to landing sites at Kennedy Space Center and Edwards Air Force Base in California and to test the fit of the spacecraft to the shuttle booster on the pad.

The other shuttles were named after famous Naval exploration ships. Columbia was a U.S. Naval Frigate that circumnavigated the globe in 1836, Challenger explored the Atlantic and Pacific for four years beginning in 1872,  Discovery was a British ship that Henry Hudson used to explore Hudson Bay. It is also the name of a ship James Cook used on his final major voyage from 1776 to 1779. Atlantis was a research vessel used by Woods Hole Oceanographic Institution (the folks that brought you the Titanic) between 1930 and 1966. Endeavor is named after another British ship James Cook sailed to the South Pacific in 1768 to document Venus passing between the Earth and the Sun. Ok…kind of boring but sometimes history is just that.

The tuxedo-like attire for the shuttle contains the black tiles (24,000 mostly custom cut to a particular location!) which can sustain up to 3000 degrees of re-entry heat and the white areas are primarily Flexible Insulation Blankets (FIB), a quilted, flexible blanket-like surface insulation used where re-entry temperature is below 649 °C (1,200 °F). The leading wing edges and nose section contain reinforced carbon-carbon panels used where re-entry temperature exceeds 1,260 °C (2,300 °F). This was the stuff that was breached on Columbia by the infamous foam insulation chunk off of the fuel tank during launch causing that disaster.

The space shuttle itself comprises a number of different elements: the orbiter, which holds the astronauts and mission payload; the space shuttle main engines; the external fuel tank; and the solid rocket boosters. The shuttle is assembled from more than 2.5 million parts, 230 miles of wire, 1,060 valves, and 1,440 circuit breakers. Weighing approximately 4.5 million pounds at launch, the Space Shuttle accelerates to an orbital velocity of 17,500 miles per hour—25 times faster than the speed of sound—in just over eight minutes. This all conceived in the 70’s, built in the 80’s (hey…remember, no cell phones or even laptops back then) and flew pretty successfully for 30 years. Not bad.

I have to say…when you watch the flights on TV you never get the size or scope of things. My 50 inch Plasma cannot do this thing justice. When you’re in the room, it’s this giant delta winged monster that rises up from the nose wheel and dominates the room. Interestingly, it’s smaller than the 747 that carried it back and forth from coast-to-coast, but maybe it’s the size of its contribution to space exploration and place in history as the most complex piece of machinery ever built by man.
Posted by Nick Saraceni at 12:02 PM